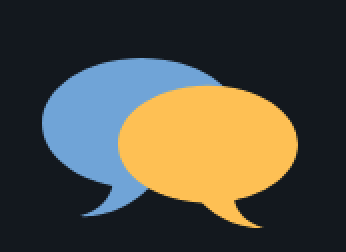 A related Vietnamese-language article to this story – which discusses media literacy efforts among ASEAN youth – is here:

By Uyen Diep of Thanh Nien*

“APOLOGIES for the slow response,” Aribowo Sasmito, co-founder and head of the fact-checking committee of the Indonesian Anti-Slander Society, known by its Indonesian acronym Mafindo, said in reply to Reporting ASEAN’s emailed questions. Given the country’s heated political temperature these days, “the distribution of disinformation was rising” along with “a flood of fact checking requests,” he explained.

Sasmito was referring to the largest student protests in decades that started in September, organized to protest a new law that critics say weakens the battle against corruption in Indonesia.

Political tensions like these, apart from periods of elections and campaigns, disagreement over sensitive religious and other issues, are the usual ingredients that combine to produce a mix of not just public debate – but less desirable content such as disinformation, and fake news, in countries like Indonesia, as well as the larger Southeast Asia.

News literacy educators are like medical doctors, Prof. Masato Kajimoto says. They can teach people how to consume news properly, much like giving advice on how to avoid getting sick. But this does not mean that false information, like a seasonal flu virus, will disappear completely.

The buzz in digital spaces these days shows how active people in the ASEAN region have become as users of online and spaces. Internet penetration in Southeast Asia is 63% (415 million out of more than 659 million people- the study’s slides cite a figure for total SEA population) and social media usage at 61%, according to the ‘Global Digital Report 2019’ produced by We Are Social. These figures exceed global averages, which are 55% for Internet penetration rate and 45% for social media usage.

Given that the digital environment is here to stay, Sasmito says education in news and media literacy remain “the best solution to fight disinformation” in the long run. Indeed, most of the news and media literacy programs in ASEAN countries have emerged in the last five years or so, as online challenges quickly grew larger and became more common.

News literacy educators are like medical doctors, Masato Kajimoto, assistant professor of practice at the Journalism and Media Studies Centre of the University of Hong Kong, said in an interview. They can teach people how to consume news properly, much like giving advice on nutritious food, and give them skills and knowledge to tackle fake news and avoid being misled or tricked, much like telling people how to avoid getting infected by bacteria or viruses. But doing all these do not mean that false information, somewhat like a seasonal flu virus, will vanish completely, he adds.

News literacy educators need to stay alert, and “keep learning and adjusting their ways based on the research and new understanding” on online use and behavior, he said.

The challenges of managing public online venues vary in different societies. “In some countries, state actors such as the government and military are the biggest producers of disinformation while in other countries there are many small operators trying to take advantage of online ad systems (with financial motives),”  Kajimoto added.

He listed a wide range of topics – race, religion, gender, politics, health, sexual orientation, ethnicity – that can be targeted by those doing disinformation, misinformation or fake news depending on countries’ political systems, socio-economic profiles, culture, and other factors.

But the most challenging aspect, Kajimoto explains, is having an authoritarian government hostile to press freedom. “You cannot teach news literacy properly in countries where journalism is controlled or heavily restricted,” he said.

Below is a selected list of local news and media literacy initiatives and approaches underway or being developed in Southeast Asia, as the region’s societies create, and test, methods of creating healthier norms in digital and online information spaces.

There will be four MIL forums for young people, especially in rural areas, this year, says the project coordinator, CCIM’s Mam Vibol.

Set up in 2016, Mafindo has led many initiatives against hoaxes, as fabricated online material are called in Indonesia. Started four years ago as Facebook forum, its work on combating disinformation ranges from its own daily fact-checking to training journalists and the general public. 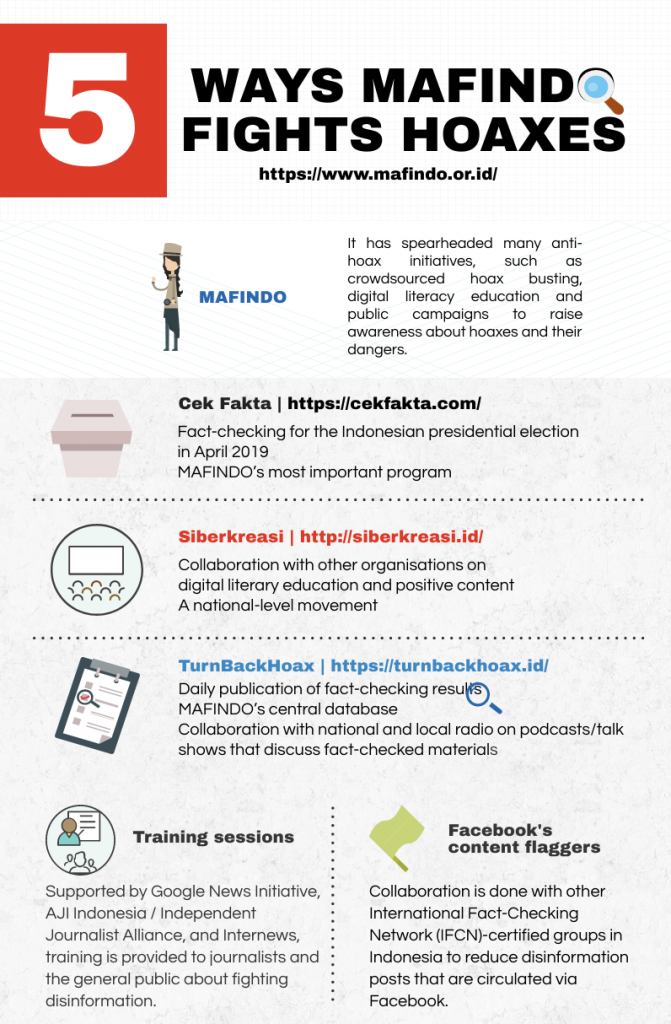 Siberkreasi (National Digital Literacy Movement) is a collaboration between Mafindo and other groups doing digital-literacy education. Separately, Mafindo is also being supported by Google News Initiative, Alliance of Independent Journalists-Indonesia and Internews in providing thousands of participants including journalists in order to fight online disinformation with the help of 60 trainers so far.

Its Cek Fakta project did real-time fact checking during live debates in the April 2019 presidential campaign and on election day, and plans to do the same during the 2020 local election.

Digital literacy activities are also undertaken by universities, some of which have included these in their curricula, says the Indonesian Digital Literacy Advocates Network (Japelidi), which evaluated 342 digital literacy initiatives from 2010 to 2017 in nine Indonesian cities. “(It is) not only about the lack of knowledge to analyze, criticize and investigate all of the information coming, but (the) effortless approach to get and disseminate information via Whatsapp groups on mobile phones *that is) also supporting the misinformation in Indonesia,” said Japelidi member Firly Annisa, a communications lecturer at the University Muhammadiyah Yogyakarta.

Myanmar’s suddenly more open media environment, which came with the country’s political transition from military rule from 2012 onwards, has freed up spaces for public discussion. But the rapid jump in Internet use and online access has also put Myanmar citizens in the middle of online disinformation, as they use and consume social media, technologies and digital news with little experience. That is why “the media literacy levels of the country remain low,” says the 2018 report ‘Myanmar’s Media From An Audience Perspective’, which was published by the International Media Support-Fojo Media Institute. 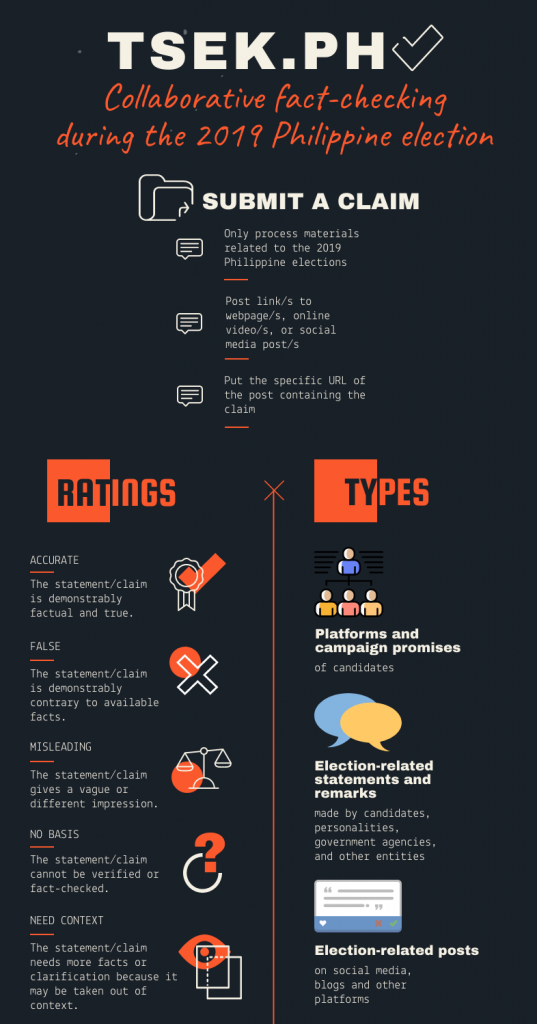 “The Philippine media is indeed known for its independent, watchdogging function,” University of the Philippines’ journalism professor Yvonne Chua said, in explaining how this environment has led to fact-checking and media literacy initiatives of different types.

Vera Files’ Fact Check has been underway for some three years now, having started from a fact-checking exercise done by Chua’s journalism students years back. Vera Files has produced a Do-It-Yourself Handbook on Fact Checking.

While Chua no longer manages the project and has left Vera Files, her university’s journalism department was part of a major initiative that was able to bring together news organizations and universities to collaborate on fact-checking and debunking during the May 2019 midterm elections in the country.

That collaboration, called Tsek.ph, was important because, as Chua explained, intense media rivalry had been a major hindrance for news organizations’ collaboration on fact-checking during elections.

Collaboration is also at the core of the Consortium on Democracy and Disinformation, which is composed of universities, media organizations, professionals and non-government groups. It has workshops on fact-checking and news literacy and hosts an annual conference on democracy and disinformation, the last one having been held in April this year.

Another group of University of the Philippines’ alumni founded the Out of The Box media literacy initiative, which trains students and teachers and develops learning materials.

Founded in 2017, the Thông hiểu thông tin – News Literacy program has been organizing news literacy courses for young people in Ho Chi Minh City through short-term classes or university tours. The latest was a 12-week intensive news literacy program held at the American Center from July to September. The program has also held workshops at multiple universities in the city, using a curriculum built after consultations with experts such as Dr. Kajimoto, as well as journalism lecturers Phan Van Tu, Nguyen Thi Minh Nguyet from the Faculty of Journalism and Communication, University of Social Sciences and Humanities (USSH) in Ho Chi Minh City.

“The aim of our class (at the American Center) is to provide a basic knowledge and skill set on news evaluation for people from all backgrounds,” said Bui Le Anh Thu, project manager for Intensive News Literacy 2019. “It is necessary for them to realize that bias is one of the root causes of the dissemination of disinformation.”

Thu is an alumna of 2018 News Literacy Institute in Asia program that was hosted by the USSH Faculty of Journalism and Communication, together with the Center for News Literacy of Stony Brook University, United States, in December that year. USSH hosted the institute’s training of journalism and news literacy trainers in 2017 and 2019.

Countries like Singapore and Thailand have media, information and digital literacy projects designed to be millennial-friendly, including through the use of digital arts or board games. The Media and Information Literacy Card Game from FNF Thailand has been aimed at primary and secondary-level students from 2011, and “provokes participants to thoroughly and critically assess how issues affect their media consumption behavior,” as stated on its website.

In Singapore, the social enterprise Make The Change organizes workshops called Digital Arts for All to strengthen media and digital literacy skills by creating digital art on iPads. A fact-checking starter kit called Get Smart with Sherlock is an initiative of Media Literacy Council of Singapore. The toolkit, in form of booklets, short videos and infographics, covers topics such as the definition of fake news, the consequences of spreading it and how to spot disinformation.

(*This feature is part of the Reporting ASEAN feature series.)