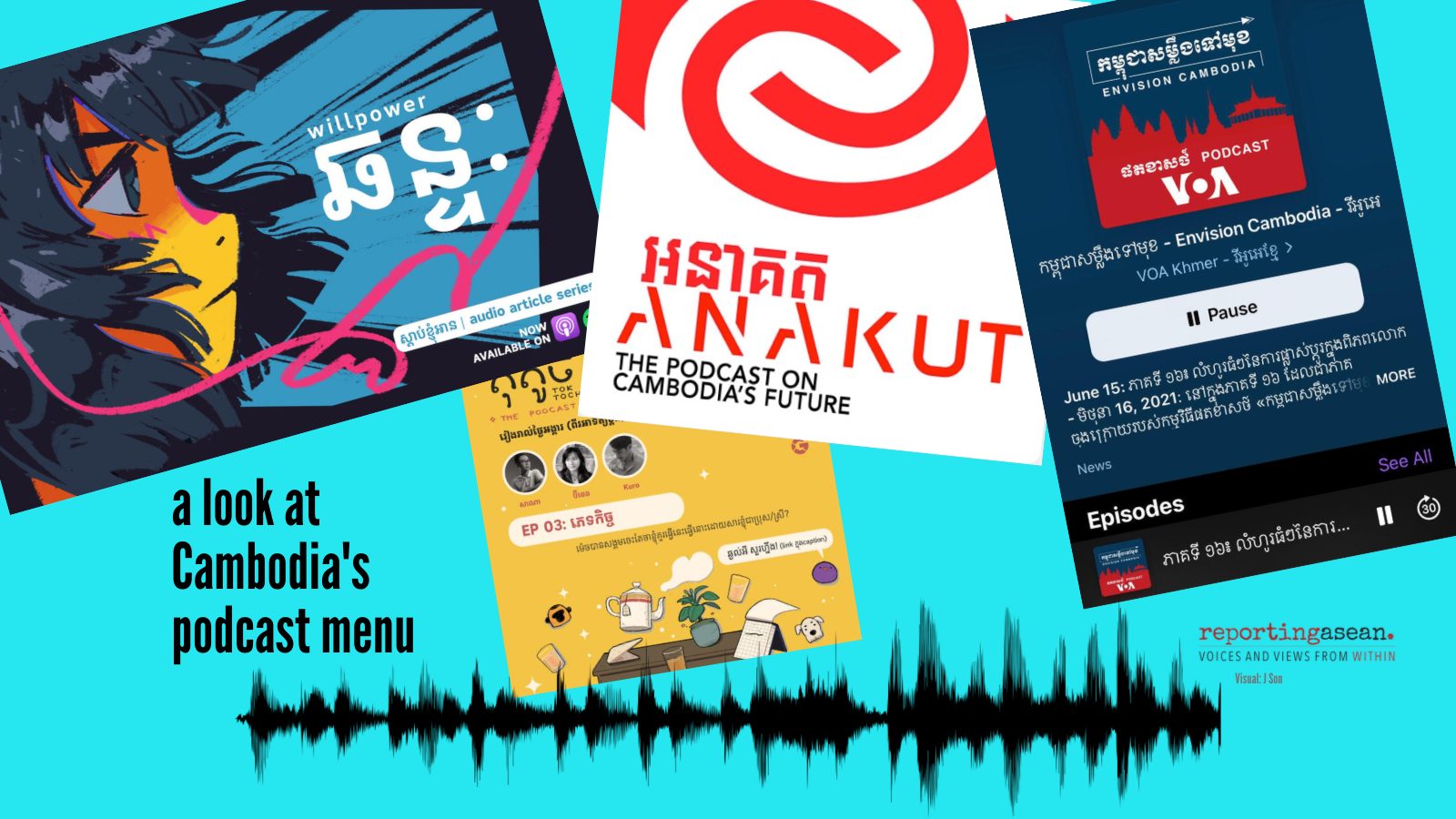 For Ngov Chihor, a 25-year-old communications professional, the end of the workday means the start of his podcast time. On Envision Cambodia, his favourite series, he gets to dive into ideas around what life in his country would be like in two decades.

The series, which he has followed since it started in mid-2020, features discussions among writers of the ‘Cambodia 2040’ book series that envisions future scenarios for this Southeast Asian country of nearly 17 million people. “I am curious to find out more about what the writers have to say,” Chihor said. “There are some additional ideas which they did not include in the book, but are discussed in the podcast.”

He is among the ranks of regular listeners of podcasts, which are still an experiment in Cambodia’s media scene but show promise among younger audiences who are used to getting information and entertainment, as well as carrying out social interactions, online.

“It is very similar to radio but more convenient, because we do not have to listen when it is broadcast live,” Chihor explained. “It’s pre-recorded, so we can play forward or backward, and listen whenever. Some of the topics are only available in podcast programmes.”

A mix of podcasts touching on topics ranging from current events like the impact of climate change to financial tips and social anxiety — with at least two produced by news outlets — has been available for Cambodian audiences since June 2020.

Through these podcast offers, producers are looking to build communities as well as expand revenue streams. COVID-19 restrictions on mobility may also be nurturing listeners, many of whom are getting webinar fatigue. Listening to audio involves using less mobile data.

“Podcast audiences are more sophisticated. They are more program oriented, and many (podcasts) are seasonal that are produced with limited episodes,” said Nov Povleakhena, who teaches multimedia journalism at the Royal University of Phnom Penh. “It will not only be news anymore. Sooner or later, podcasts won’t be a foreign idea to young Cambodians anymore.”

Like other Southeast Asians, Cambodians rely on smartphones and social platforms for a good part of their news. “Facebook/internet” were identified as Cambodians’ most important news source in an Asia Foundation report as early as 2016, followed by television, “word of mouth” and radio. TV was the top source the year before.

Today’s young audiences are even more skilled with smartphones and technology than millennials like herself, who grew up with radio, Povleakhena says. “When I started introducing podcasts to the students, there were few examples of podcasts produced by Cambodian media,” she said, adding that this has now changed.

Whether podcasts can be monetized is still too early to tell, producers say. For now, the focus is on building the audience.

Local producers are upbeat about the future of podcasts, whether as a complement to the content they already produce, or as a stand-alone product.

“Podcasts can be a game-changer in Cambodia’s news environment, both for journalists and for news consumers,” said Ten Soksreinith, multimedia producer at VOA Khmer. “I personally think that in just a few more years, podcasts will be one of the most popular media for young people to get their favourite online content from.”

Podcasts provide “maybe another way to supplement your content and attract a new audience and new readership, new listeners, and there is value in that”, said Daniel Marchette, who is general manager at Globe Media Asia, which publishes ‘Southeast Asia Globe’ news magazine.

Whether podcasts can be monetized is still too early to tell, producers say.  For now, the focus is on building the audience.

“If someone is able to do something that resonates with the Cambodian audience and in Khmer language, I think there could be potential and in that same way, I think it will grow, but again, to what level, it’s really hard to predict,” said Marchette.

Listeners need to go to audio platforms to access podcasts, which entails behaviour that is different from Cambodians’ habit of checking Facebook, explains Alix Feschotte, co-founder of the Wapatoa multimedia site. “The number one habit for our users and young audiences is not yet to open Spotify. They just open their Facebook and that is how they start their day. So if you have a podcast on Facebook, it is just super hard to access the audio there,” she said. But “it (podcast scene) is going to grow in the future because we can see it is growing now, since we started,” Feschotte said.

“If there are more podcasts in Khmer language, I think it will attract more Cambodian users,” said Chihor, the regular podcast listener.

Below are four picks for made-in-Cambodia podcasts: Envision Cambodia, Anakut, and Willpower and Tok Toch.

Envision Cambodia, one of the first podcasts by Cambodia-based news outlets, draws audiences keen on reflecting on what the country would be like in the future.

Produced by Voice of America (VOA) with the local think tank Future Forum, this Khmer-language podcast features experts’ insights on Cambodia’s future in terms of the economy, diplomacy, environment, among others. Listeners get a front-row seat in 20-40 minute conversations between VOA journalists and guest experts, each of whom wrote one of 16 themes covered by the  “Cambodia 2040”  book series.

While VOA has had a Khmer service since 1955, it went into podcasts as part of its shift from a radio-based operation to a multimedia one a decade ago.

Apart from providing a space to interact with Cambodian thinkers, VOA aims to “get (them) exposed to audio content on-demand, told in creative writing supported by data and facts,” explained Soksreinith. “The number of people listening to radio in Cambodia has been decreasing as we see an increase of social media users, access to the internet and mobile phones,” she said.

On-demand audio offers something different from the standard four-to-eight minute daily radio broadcasts, she adds. For Soksreinith, the 200 to 300 listeners of each episode are already a success, given the novelty of podcasts.

Envision Cambodia’s Season 1 is on Apple and Google podcasts, and starting Season 2, also on Spotify.

A wider, younger audience is what the English-language Anakut (‘the future’ in Khmer) podcast on current affairs, produced by Globe Media Asia, aims to connect with.

Started during the pandemic in October 2020, Anakut discusses gender and LGBTQ+ issues, ASEAN, China’s regional influence, democracy and corruption, all the way to Cambodian traditions, identity and culture.  In ‘Saving Prey Lang Forest’, the hosts candidly asked environmental campaigners if had security worries in their work given the past arrests of some green activists.

‘Southeast Asia Globe’ went into podcasts after switching to digital publishing in late 2019 and becoming a member-driven news platform, relying on grants and custom content to generate revenue. The production of Anakut, whose second season ended in August, was supported by Germany’s Konrad Adenauer Foundation.

“Podcasts are a growing trend here. Maybe not Cambodia-specific podcasts, but podcast listening and podcast consumption is becoming more and more popular among younger Cambodians,” Marchette said. “So we thought let’s give it a try.”

Listen to this 40-minute podcast on Amazon, Apple, Google and Spotify.

The Willpower audio series and Tok Toch (‘tiny table’) mark the return to podcasting by the three-year-old multimedia operation Wapatoa this year, following a first try in 2018.

Wapatoa founders Sokcheng Seang and Feschotte added podcasts to the site’s content, which include video pieces, comics and cartoons and visual explainers for their audiences — Cambodian youth whose interests are under-reported by the mainstream media.

Wapatoa founders Sokcheng Seang and Feschotte added podcasts to the site’s content, which include video pieces, comics and cartoons and visual explainers for their audiences — Cambodian youth whose interests are under-reported by the mainstream media.

Spotify’s entry into Cambodia was a factor in their going back to audio, says Feschotte. “Young people are moving to that platform. The idea is to be among the first to be in the space. That is our strategy,” she said.

In the episode Habits, The Good and the Bad , the Tok Toch hosts shared their own struggles with healthier life-and-work routines in the pandemic – be it around going to bed too late or spending hours on online gaming. “COVID-19 makes you study and work from the bed, and go to sleep on the bed. The next day you get up, you are still on the bed, “ one host quipped.

Thirty percent of each episode’s time is allotted for the hosts to answer questions and read insights that are sent in anonymously. This segment is popular with audiences, Feschotte adds.

Get Tok Toch and Willpower on Apple, Google, Spotify and YouTube.