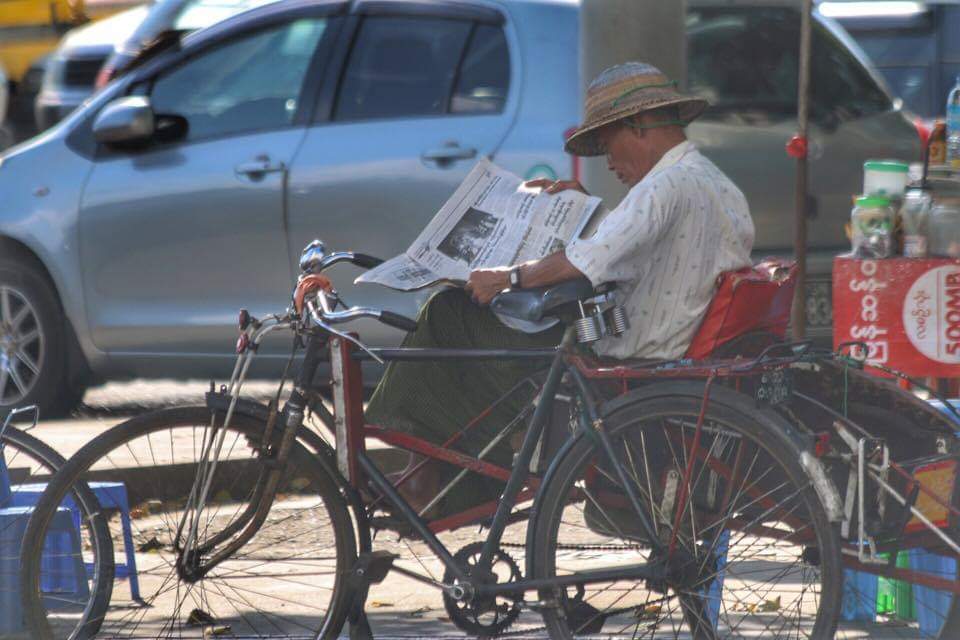 From the outside, ASEAN has been testing the limits of its non-interference policy in ways never done before, being a diplomatic bridge to Myanmar while pressing it to address international criticism for its treatment of its Rohingya minority. But from inside Myanmar, ASEAN’s role in the Rakhine issue is far from well known, or cared for.

There are now more than 910,000 mainly Rohingya refugees in camps located in Bangladesh, living in what are the world’s biggest refugee settlements, without 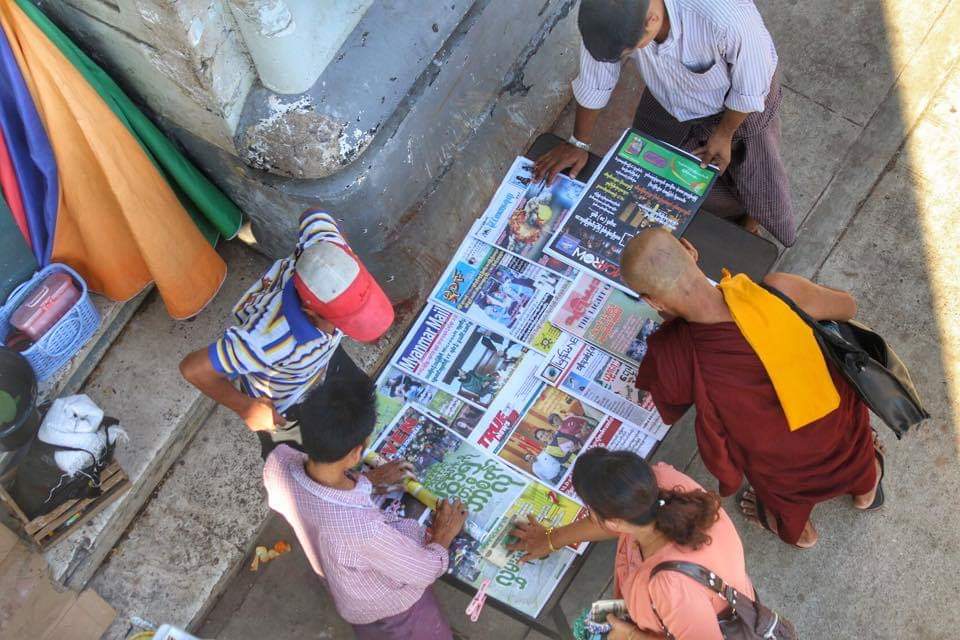 A lot of news, but few independent reports on the Rakhine crisis. Photo: Wai Yan

much hope of relocation or safe repatriation to Myanmar’s northern Rakhine state.  Their numbers increased greatly after more than 700,000 Rohingya fled across the border to Bangladesh in the wake of clearing operations by Myanmar’s military in August 2017.

While Myanmar and Bangladesh continue to talk about repatriation, the United Nations’ Special Rapporteur Yanghee Lee said in September that conditions remained unsafe for the Rohingyas’ return. Findings by the International Fact-Finding Mission, set up by the UN Human Rights Council, are similar. Two attempts to arrange repatriation have failed.

In contrast to criticism from western governments, ASEAN’s statements have been what diplomats call ‘pragmatic’ – packaged as being “supportive” of Myanmar’s efforts to see more development in Rakhine, while providing humanitarian support and encouraging repatriation that meets international standards

In the last few years, ASEAN had made major progress in engagement with Myanmar, and access to, Rakhine. Today, Rakhine is a standard topic in ASEAN meetings.

While Rakhine remains closed to the media and outsiders, the ASEAN secretary-general has been there. In March, the ASEAN Coordinating Centre for Humanitarian Assistance on Disaster Management (AHA) sent a team that conducted a preliminary needs assessment for the return of Rohingya refugees. As ASEAN Chair this year, Thailand called it “the first ever mission of ASEAN to Rakhine State, Myanmar”.

But “I doubt the wider Myanmar public are much aware of it and interested in it (ASEAN’s role on Rakhine),” said Lynn Myat, a research fellow from Rakhine who works at the Peace Leadership and Research Institute in Yangon

“I acquire information about ASEAN involvement in Rohingya refugee repatriation process from the regional press as well as statements and press releases, not so much from Myanmar media,” he said in an interview. “This issue seems not very important for media in Myanmar”.

“I don’t know about ASEAN interventions for Rakhine,” said a 39-year-old business executive at a national business and trade association in Yangon, who asked not to be named. “The media situation is backward, access to information is limited, so local voices are heavily filtered,” she said.

Compared to its initial hesitance to discuss the Rakhine issue in a regional context, Myanmar’s government has become much more comfortable talking about this with ASEAN countries rather than with western governments.

Toe Aung, an advisor to Myanmar’s leader Aung San Suu Kyi, told the state-owned ‘Global New Light of Myanmar’ newspaper in May: “ASEAN supports the way we are handling the problem and our work. They are going so far as establishing a University in Rakhine State to help us.” He was referring a ‘peace university’ project in the historic town of Mrauk U to be undertaken by the Suu Kyi-led Union Enterprise for Humanitarian Assistance, Resettlement and Development in Rakhine and the Singapore-based Asia Philanthropy Circle.

The local Myanmar media’s handling of the Rohingya issue generally ranges from cautious to hostile. Most still avoid using the word ‘Rohingya’, calling them ‘Bengali migrants’ or referring to ‘the Rakhine situation’.

The mainstream apathy inside Myanmar toward the Rohingya play a major role in the locals’ lack of awareness about ASEAN’s role. This view – that the Rohingya are illegal immigrants from Bangladesh who are thus not entitled to citizenship – persists.

When the insurgent Arakan Rohingya Salvation Army (ARSA) attacked around 30 security force outposts in Rakhine State on Aug. 25, 2017 – incidents that triggered the Myanmar military’s massive operations that forced Rohingya to flee – the common public outcry was that these were terrorist attacks. Such perceptions intensified hostility toward the Rohingya.

This is helped little by the situation in the local media, where handling of the Rohingya issue generally ranges from cautious to hostile. Most local media still avoid using the word ‘Rohingya’, calling them ‘Bengali migrants’ from Bangladesh or referring to ‘the Rakhine situation’. 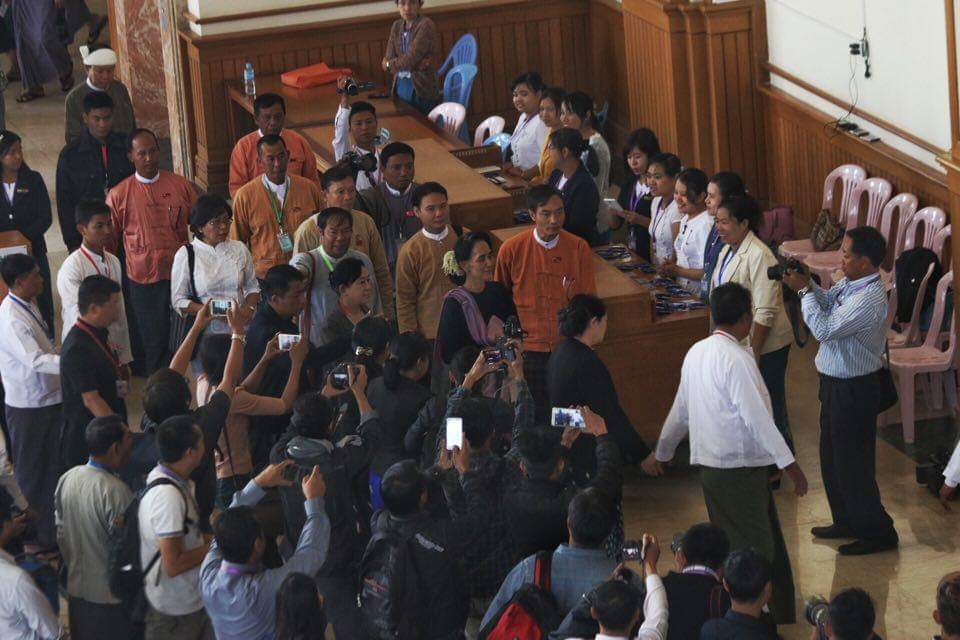 Media access to Rakhine remains tightly restricted, so journalists can only go there through government-organized tours. This means that the state narrative influences a good part of coverage of Rakhine crisis within the country

“We often cover Rakhine issues, but since we can’t get to Rakhine easily. We are only able to write stories which can be confirmed by the government or the military,” said the editor-in-chief of one national media outlet, who requested anonymity

Another journalist says local media avoid the Rohingya issue because it carries many risks. “At this time of crisis for the media itself, the local press doesn’t want to encounter trouble with either the Tatmadaw (Myanmar army) or the government,” said this journalist, who is based in Nay Pyi Taw, the country’s capital.

“Media ownership is another issue here. The media proprietors don’t want to upset their readership with Rohingya coverage as this would affect their businesses,” the same journalist added, because Myanmar people commonly support their government’s actions in Rakhine

The divisiveness around the Rohingya issue has also emerged in civil society discussions.

“Even in the recent ASEAN’s People Forum (in Bangkok in September) some members of Myanmar civil society organizations went into a heated debate with their regional counterparts regarding the Rohingya’s rights,” the journalist in Nay Pyi Taw said. “This can show the level of sentiments against the Rohingya in Myanmar.”

“Let’s start by calling a spade, a spade. What happened in Rakhine state is genocide,” Malaysian Prime Minister Mahathir Mohamad was quoted as saying by the Malaysian state news agency Bernama on the sidelines of the United Nations General Assembly in September. “What took place were mass killings, systematic rape and other gross violations of human rights,” he said. Malaysia also raised the Rohingya issue at the ASEAN summit in June.

For its part, Indonesia has suggested that ASEAN have a timeline to carry out the recommendations made by the ASEAN team that did the preliminary needs assessment in Rakhine, according to a tweet by Indonesian Foreign Minister Retno Marsudi that was reported by media.

Indonesia threatened to walk out at the 40th General Assembly of the ASEAN Inter-Parliamentary Assembly (AIPA) in Bangkok in August, after the Myanmar delegation refused to discuss Jakarta’s proposed draft resolution on the Rohingya humanitarian crisis.

“We rejected Indonesia’s draft resolution from the political agenda, because we don’t accept the action of shaming and blaming specific countries,” Pyone Kaythi Naing, a member of the Myanmar Parliament’s international relations committee, told ‘The Irrawaddy’ news.

Readers usually come across news on Rakhine that are from the state’s viewpoint. Photo: Wai Yan

The majority of people in Myanmar do not accept the Rohingya’s identity as a community and as people of the same country, so this has deterred ASEAN and the international community from getting much more involved or pressing for intervention that holds Myanmar up to international norms, Maung Saungkha, a poet and free-expression advocate, said in an interview.

“They [ASEAN] don’t like the human rights violations happening in Myanmar. They know what is going on on the ground, but they don’t get involved much deeper,” said Maung Saungkha, who was jailed for six months in 2015 for writing a poem that a court found slanderous of the Myanmar president at the time.

Perceptions of ASEAN’s role in the Rakhine crisis range from a distrust of ASEAN’s motives to doubts about the utility of its intervention.

The same business executive officer based in Yangon, aware of the Myanmar business community’s support for the state’s approach on Rakhine, said: “To be honest, ASEAN talks a lot. But when it comes to assistance, there is not so much available. What they are seeking is their share of the pie from Myanmar’s fast development.”

“The Myanmar government is comfortable talking with ASEAN on the Rakhine issue, even granting access to Rakhine. They (Myanmar) talk with the people they like and deal with the parties they feel cozy (with),” said Lynn Myat. “I’m interested to know how ASEAN is going to interfere (further) in this situation, if they have any further plans,” he said.