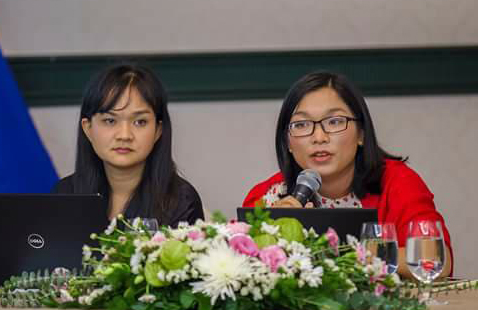 HANOI, Dec 10 – Phuong Anh and Hong Tham share a passion to protect children from sexual abuse. Ms Anh, 33, is a reporter for MobiTV, a pay television channel and has spent the last 11 years covering stories of child sexual abuse. Six years ago she teamed up with her professional colleague, Hong Tham, 28 years old, a news reporter with Thieunien, the national newspaper for teenagers, to report on the issue.

Hong Tham (left) and Phuong Anh sharing their insights from doing a feature story on child sexual abuse in Vietnam at the November workshop of the Southeast Asian Press Alliance.        Photo: SEAPA

Both identify strongly with the victims and their families and this is why they give priority to these cases in their reporting, they say. “I often read a lot of news on this topic,” says Ms Anh. In her previous media job, women reporters tended to be assigned to report child sexual abuse cases. “We used to run a series of stories on signs to identify child sexual abuse and infographics on how to prevent it, which was awarded.”

The sexual abuse of children is coming out in the open in Vietnam and has become a hot topic for mainstream media. Tens of cases have been reported in recent years and the media publicity has resulted in social outcry which has forced authorities to act to bring the perpetrators to justice and protect the right of survivors.

One of the few cases where the perpetrator was brought to justice was largely due to wide media publicity. In mid-2016, a mother in the coastal city of Vung Tau in southern Vietnam accused a 77-year-old man of sexually assaulting her seven-year-old daughter many times. City police subsequently found that this man was accused of sexually abusing two other small girls in 2014, but was not arrested due to lack of evidence. A charge by the city police against the alleged perpetrator was rejected by the Supreme People’s Procuracy of Vung Tau, the highest judicial authority in the city.

Data from the Police General Department shows that on average, over 1,000 child sexual abuse cases are reported annually. But the figure is believed to be much higher as many victims prefer to keep silent because of fear, inferiority complex or shame.

The survivor’s family questioned this decision in a letter to the President of Vietnam, who sent an official request to city judicial authorities to expedite the case. Together with the widespread media questioning of the delay in initiating the prosecution, this forced the Supreme People’s Procuracy of Vung Tau to finally act, leading to the 17 November 2017 conviction of the perpetrator who was sentenced­ to three years in prison. 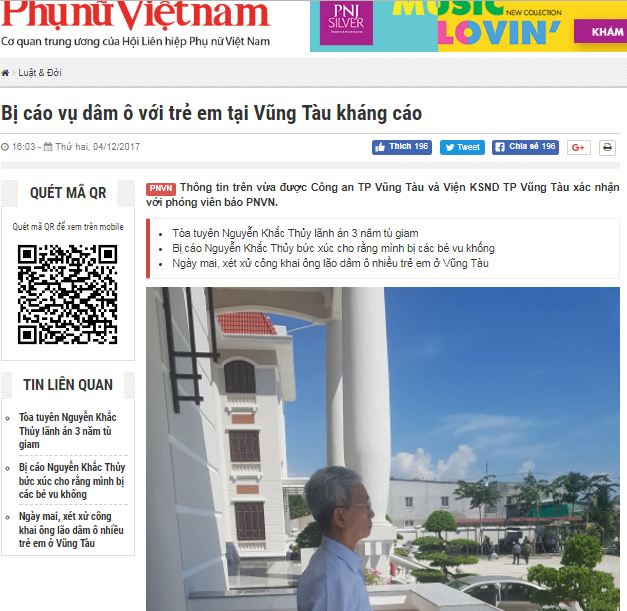 The Dec. 4, 2017 report by journalist Dinh Thu Hien on the appeal filed by the convicted child sex abuser in Vung Tau.

Dinh Thu Hien, a woman journalist of Ho Chi Minh City Women Newspaper, reported this case from the beginning to the end, writing tens of stories on its progress. “The perpetrator must pay for his actions. The pain for these kids stays forever,” she says. 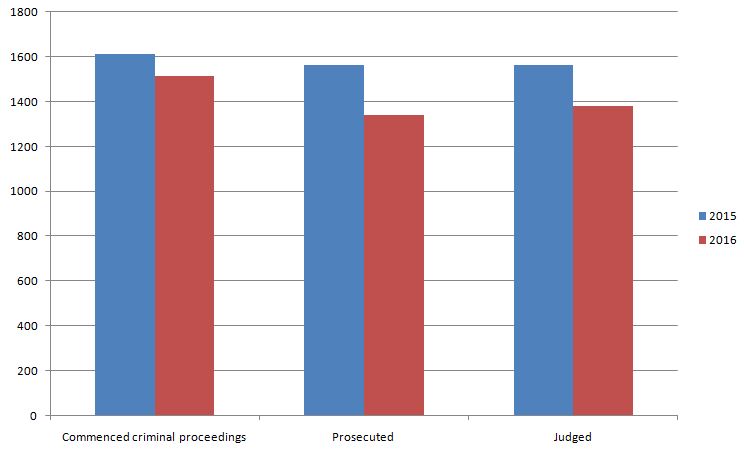 Figures of cases where criminal proceedings have been commenced, prosecuted, and handed down judgments on by the Supreme People’s Procuracy of Vietnam in 2015 and 2016.

Another widely reported case involved the suicide of a 13-year-old girl after local police in the southern province of Ca Mau ignored a complaint by her family that she had been raped many times by a 57-year-old neighbor. The victim’s story became front page news and the Prime Minister ordered the Ministry of Public Security and Ca Mau authorities to urgently investigate the handling of the case.

The mother of an 11-year-old rape victim in Binh Thuan province knows how media can help bring justice. “The commune police only advised me to reconcile with the perpetrator and accept the compensation he was offering,” she recalls. She then contacted a newspaper reporter who came and talked to her and published the story about the police inaction. “A lawyer from Hanoi then visited us. A child-protection NGO gave us 150 USD and advised us not to talk to the media. (But) I told her that it was the media reports that made all of you visit me.”

Data from the Police General Department shows that on average, over 1,000 child sexual abuse cases are reported annually. But the figure is believed to be much higher as many victims prefer to keep silent because of fear, inferiority complex or shame. Experts agree on the need for removing legal obstacles to tackling the issue and the media is considered as an effective tool in pressuring authorities to investigate these cases.

Media practitioners also blame the delay or even inaction in child sexual abuse cases on weak cooperation among police, judiciary and relevant ministries. “There is no clear partnership between the health sector and others. Where can we send the survivors? There is no specific address to send to,” a woman health expert pointed out during a workshop on domestic violence organized by UN Women and the Ministry of Labour – Invalids and Social Affairs (MOLISA) on 22 November 2017. “There should be a joint cooperation framework which clearly mentions the tasks and responsibilities of all stakeholders,” a woman official of the Politics Department, Ministry of Police, told the forum. “In some cases, some stakeholders do not understand their responsibility,” she added. (END – Co-edited by Nai Nai)

(*This article is part of a series produced under the Regional Reporting Fellowship (RRF) of the Southeast Asian Press Alliance, focusing on gender, access to information and ASEAN. In collaboration with SEAPA, Reporting ASEAN is publishing the stories from this series.)

This is a sidebar to the main story: https://www.reportingasean.net/gender-justice-women-journalists-use-power-pen/