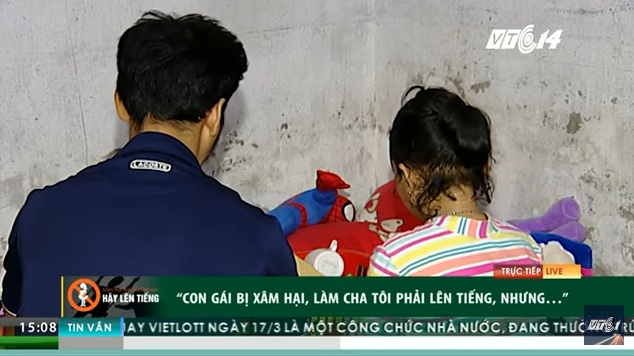 Home » #mediaonmedia » When Media is Insensitive

HANOI, Dec 11 – With a 90-minute live show and three short video clips of three minutes each, Nguyen Hanh, a journalist with Vietnam Multimedia Corporation’s VTC14 television channel, contributed significantly to ensuring justice for the family of a three-year-old girl sexually assaulted by an elderly man in Hanoi.

Before, during and after producing these video clips, Ms Hanh obtained the consent of the child and her parents to broadcast these on VTC14. She also protected the family’s privacy by hiding the survivor’s face, blurring her image and camouflaging her voice. 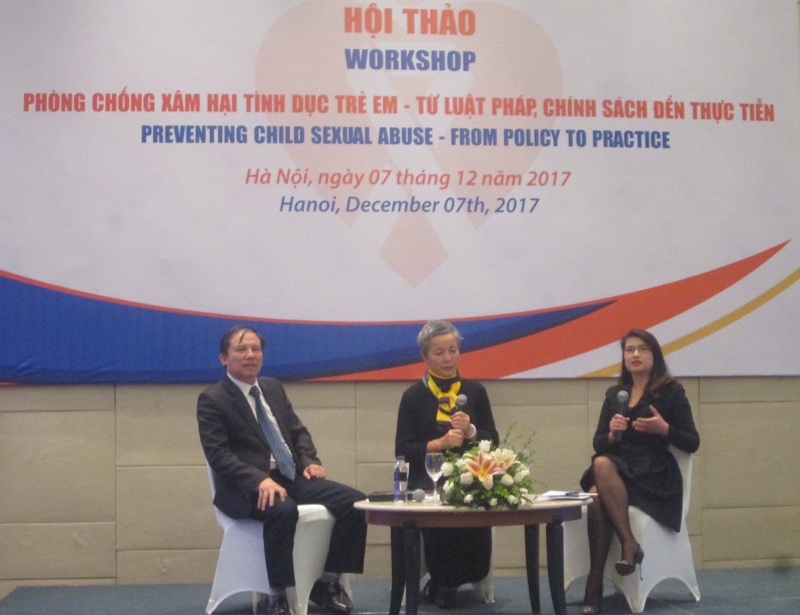 Journalist Nguyen Hanh (rightmost) discusses the protection of sexually abused children, and the need to prevent such abuse.

“I do not think this reduced the impact of the story. My reports still depicted real cases and real individuals which conveyed clearly how painful it was for the victim and her family,” says Ms Hanh.

Ms Hanh, like many Vietnamese journalists, knows about the importance of protecting the rights to privacy  of child sexual abuse victims and their families, from her experience and working with experts and lawyers. She was invited to be a panelist on a discussion on the role of schools in preventing child sexual abuse and supporting sexually abused children, during a December 2017 workshop which was organized by the local non-profit organization Centre for Studies and Applied Studies in Gender, Family, Women and Adolescents and the Embassy of the Netherlands in Vietnam.

Some media reports of child sexual abuse did not conceal victims’ faces and published details that distracted the audience, says Lan Minh, former Director of the Youth and Teenager Department of the Voice of Vietnam. This led to victims being labeled by neighbors as “sexually abused” kids. “These reporters thought they were protecting children, but in fact, they abused them,” she says.

However, most newsrooms in the country still do not have any code of ethics or training courses on the issue. There are journalists who lack this awareness. Well-known local newspaper ‘Lao Dong’ reported in 2013 that 5% of journalists participating in a survey on this issue said that it was acceptable to publish names and addresses of child sexual abuse victims or of children found involved in crime, in order to make their reports more authentic. 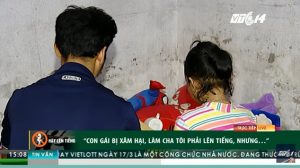 Screengrab from a live TV talk show on VTC 14 channel, discussing a child sexual abuse case in Ba Vi, Hanoi, hides the faces of the survivor and her father.

This attitude is evidently behind the widespread insensitive media reporting of child abuse in the country. A 2013 survey by the Center for Community Development and Social Work (CODES), a local non-profit organization, of five popular online newspapers which were listed in the top 50 Vietnamese newspapers in 2012, found 548 reports violating the right to privacy of children by publishing the names, pictures, addresses, school sand names of their parents/guardians. Nearly half of these children had been sexually abused and 74% of these were girls. Especially, 68% of these reports were circulated in tens of other websites.

According to Nguyen Thi Lan Minh, an expert with the Association to Protect Child Rights, some news media outlets focus on sensational news to boost their ratings. “They do not consider the consequences for children,” she says, adding “there is a 10-point code of ethics for journalists as well as specific articles in the Law on Press which regulate reporting on privacy”.

Lan Minh, former Director of the Youth and Teenager Department of the national radio station Voice of Vietnam, claims that some media reports of child sexual abuse did not conceal victims’ faces and published details that distracted the audience. This led to victims being labeled by neighbors as “sexually abused” kids. “These reporters thought they were protecting children, but in fact, they abused them,” she says. 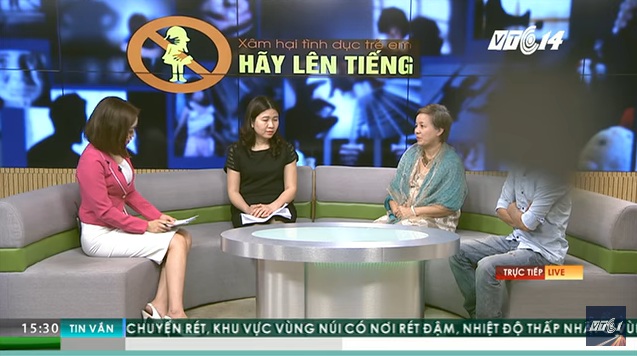 The face of the victim’s father was made blurred in a live talk show entitled ‘Child Sexual Abuse’ on VTC 14.

Legal expert Nguyen Van Tu, Director of Fanci Law Company, listed the aforementioned violations as the second time the child victim is abused. “In some cases, the media has seriously has violated this right by publishing personal information of children,” he says. “It made them vulnerable. What will happen when they grow up and still suffer this discrimination?”

Nguyen Thi Nga, Vice Director of Department of Child Protection and Care, said such media insensitivity amounts to a “second abuse” of the victim which is “sometimes more harmful than the first”.

“When the media publishes such information, the privacy right of victims is violated. It makes victims hesitate in reporting their cases. Responding local authorities are also affected. For example, it is asked why was the suspect not arrested after being called in for police questioning?”

Some women journalists do not want to be identified with such journalism. “I feel annoyed to read this stuff even though I am a journalist. The audience does not like such details being published to shame victims,” says Phan Duong, a journalist with VNExpress, a well-known local online newspaper. “It cannot be considered ‘trustworthy information’,” she adds.

Article 21 of Vietnam’s Law on Children states: “Children have the imprescriptible right to privacy and keep personal and family secrets, all are for the best interests of children… They are protected from and may resist illegal interventions against personal information.” 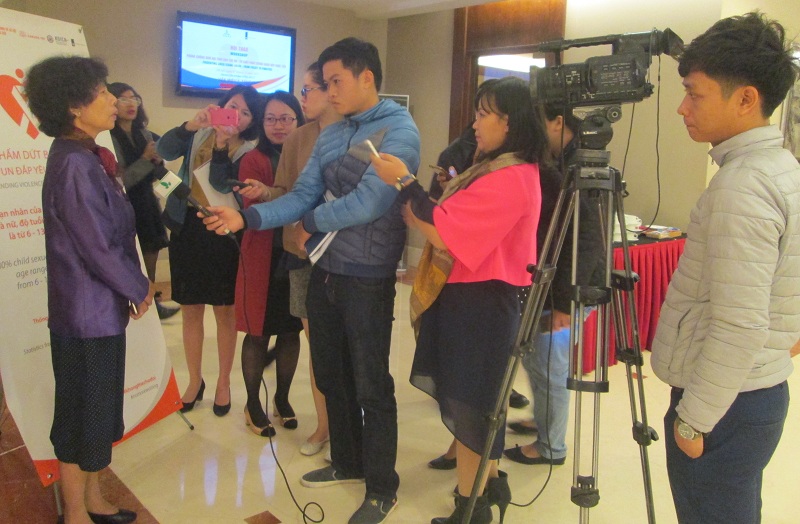 Article 33 of Legal Document 56/2017/NĐ-CP guiding implementation of Article 21 states that all information related to a child’s name, age, health status, address, image and others is private and legally protected. Article 15 of legal document 09, issued in June 2017, states that media has to hide or blur the face of child victims and ensure their privacy according to Article 33.

Yet, Le Ngoc Luan, the lawyer who successfully pursued the child sexual abuse case in Vung Tau, says there is a big gap between theory and practice. “We have the law. Do we practice it?” he asks.

He had allowed the media to interview the victim and her family with their faces covered and to publish the interviews because he believed that publication would create public empathy and this would force authorities to act. (END – Co-edited by Nai Nai)

(*This article is part of a series produced under the Regional Reporting Fellowship (RRF) of the Southeast Asia Press Alliance, focusing on gender, access to information and ASEAN. In collaboration with SEAPA, Reporting ASEAN is publishing the stories from this series. For the original Vietnamese version of this feature, click on: http://hanoitv.vn/khi-bao-chi-thieu-nhay-cam-d79226.html.

This is a sidebar to the main story: https://www.reportingasean.net/gender-justice-women-journalists-use-power-pen/