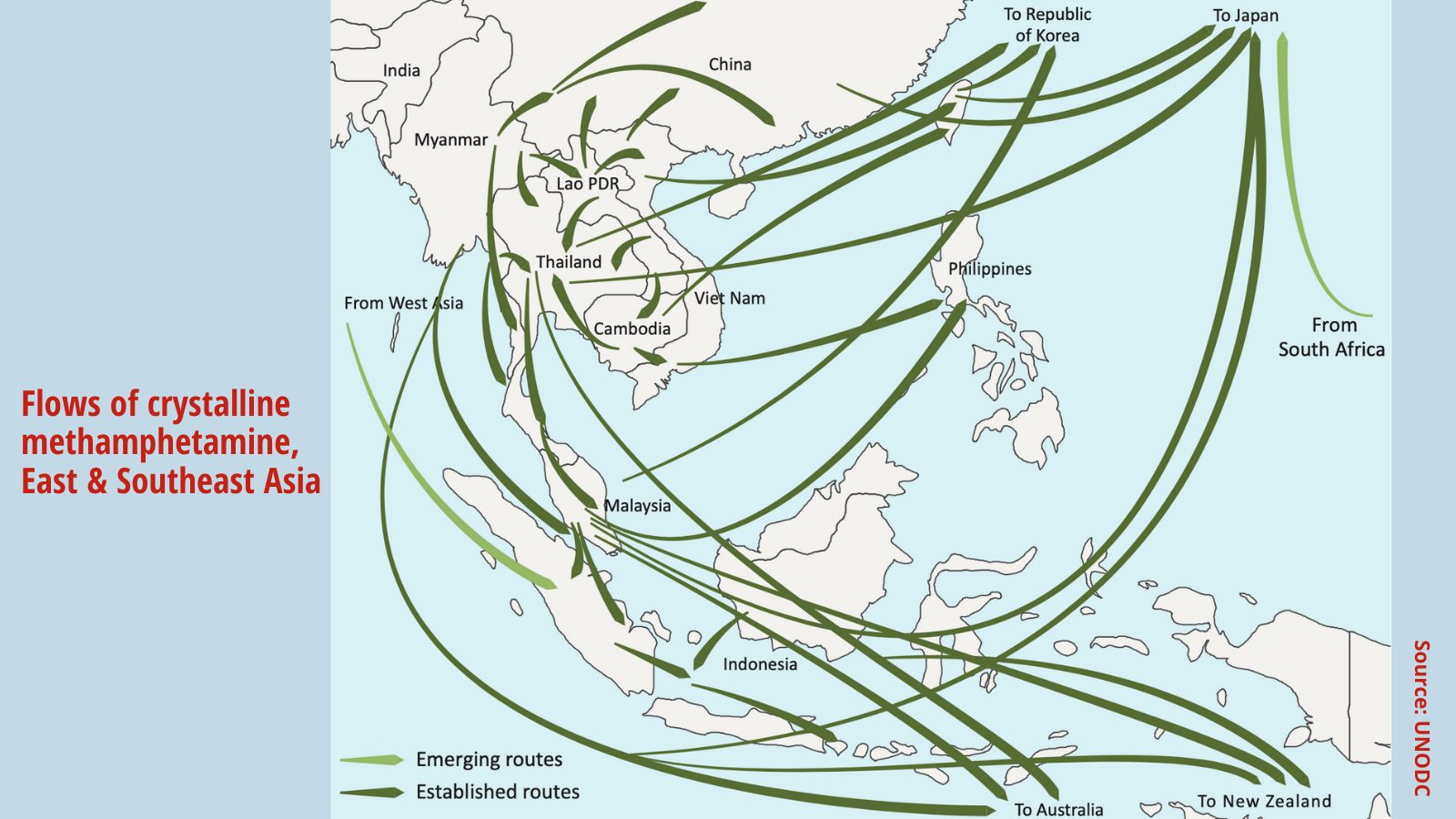 Read this in Thai

It has been quick to spot opportunities and reduce risks, thriving despite COVID-19. In its own brand of regional integration, it has been connecting the dots across the lower Mekong region as it carves out new ways to cross borders and reach its customers in the most efficient ways.

An example of a resilient business model in hard times? Indeed, except that this describes how the synthetic drug industry has been expanding in East and Southeast Asia, home to the Mekong region that is the manufacturing and trafficking hub that supplies illicit drugs that reach not just the wider Asia but the globe.

“COVID-19 has had very, very limited impact and especially in the Mekong region, we don’t see much impact of COVID-19,” Inshik Sim, drug programme analyst for Southeast Asia and the Pacific for the United Nations Office on Drugs and Crime (UNODC), said at a June discussion around a report on the synthetic drug situation. “It shows the flexibility of the organised crime groups that have been able to successfully supply methamphetamine and other synthetic drugs into Southeast Asia.”

Seventy-one percent of the record seizure of 169 tons of methamphetamine in East and Southeast Asia in 2020 were in these five Mekong countries: Cambodia, Laos, Myanmar, Thailand and Vietnam, the UNODC report said. This figure was some 20% more than the 141 tons seized in 2019, reflecting a continued rise over the past decade.

“All the lower Mekong countries except Vietnam seized record quantities of methamphetamine, despite COVID-19” in 2020, Sim added. East Asian countries, in contrast, reported seizures at their lowest rate in since 2013.

This ‘industry’ thrives in a pandemic normal, despite travel restrictions, border checks and the deepest global recession in a nearly a century, UNODC and other drug experts say.

Drug syndicates have diversified distribution methods for synthetic drugs – made from man-made chemicals to mimic the effects of other illicit substances – to maritime routes, including from Thailand, and online channels. Production has been expanding to Cambodia, and distribution through Laos – countries that have weaker capacity to seize drugs and identify chemicals for making them, explains the ‘Synthetic Drugs in East and Southeast Asia: Latest Developments and Challenges’ report released by the UNODC in June.

“We (have) found the rise of maritime trafficking especially in Thailand to third countries, Paisith Sungkahapong, deputy secretary-general of Thailand’s Office of the Narcotics Control Board, said at the discussion at the Foreign Correspondents’ Club of Thailand. “Drug syndicates have exploited new techniques by using online (spaces) to trade drugs or various social media platforms to conduct their activities.”

Ocean shipments, from Thailand to places such as Australia, Hong Kong or the Philippines, have been seized with “ice (crystal meth), some ecstasy as well, under electronic goods, picture frames,” he said. Crystal meth produced in the Golden Triangle is also put in teabags, of which the most commonly seized ‘brand’ in 2020 was ‘Guanyinwang’.

Jeremy Douglas, UNODC regional representative for Southeast Asia and the Pacific, says syndicates are using ‘mother ships’ that meet up with smaller vessels, such as those from Myanmar’s Irrawaddy Delta or areas by the Andaman Sea and pick up drugs they ferry elsewhere.“Typically, these are ships that are swapping their flags, changing their names and they’re fishing fleet boats with crews that in many instances are just pawns in the game,” he said.

In December 2020, Malaysia’s coast guard seized 2.2 tons of crystal methamphetamine aboard a small-engine ship that had come down from Thailand’s west coast and was going through the Malacca Straits to Penang, Malaysia on the way to Indonesia.

The synthetic drug trade has been expanding production sites and supply chains too. “It’s not just about Shan state, Myanmar. We started noticing that Cambodia has been increasingly targeted for synthetic drug manufacturing,” Sim said.

In 2020 alone, Cambodia dismantled five labs that had methamphetamine and other synthetics. In August that year, Cambodia reported the seizure in Sihanoukville, on the Gulf of Thailand, of 1.9 million tons of methyl alpha-phenylacetoacetate (MAPA), a precursor for methamphetamine, in what Sim called the “first seizure for Southeast Asia” of this substance.

“Lao PDR has been increasingly targeted for transit and trafficking of methamphetamine and its related chemicals,” the UNODC report said. On top of the usual routes from Myanmar to northern Thailand, illicit producers are using Laos as a transit country to Thailand given pandemic restrictions.

This has led to more seizures of methamphetamine and crystal meth at the Thai-Lao border: In 2020, 5.7 tons of crystal meth were seized in 12 north-eastern provinces of Thailand, from just 266 kg the year before.

Seizures of chemicals used in making methamphetamine on the way to Shan state, show Laos is becoming what the UNODC called a “key hub for the transit of chemicals” headed for that part of Myanmar.

Lao authorities reported a huge increase in the seizure of drug-related chemicals last year, totalling 125 tons compared to 13 tons the year before.

In July 2020, Laos seized 72 tons of propionyl chloride, a non-controlled chemical that can be converted into ephedrine for use in producing methamphetamine, in the Ban Mom port area in Bokeo province, by the Mekong River. That shipment had come from China to Thailand and was seized in Laos on its way via the Mekong to Myanmar Special Region 4 (Mong La).

A key challenge lies in East and Southeast Asia’s being the global production hub for legal chemicals. Syndicates have been diverting legal but non-controlled chemicals – often already within the region – to use in new drug mixes and send to markets in North America, Europe.

The “unprecedented supply” of synthetic drugs has pushed down prices that in turn push up demand, the UNODC report says. Cambodia, Thailand, Malaysia reported lower prices for crystal meth in 2020. Crystal meth prices in Cambodia fell to 7,000 dollars a kg, down from 38,000 dollars five years ago.

The parallel rise in methamphetamine seizures and their usage shows that the region is becoming a major market for the use of, and not just production, of synthetic drugs, the report says. The prevalence of crystal meth use in Thailand jumped tenfold between 2016 and 2019, while annual seizures rose by 15 times. Vietnam saw a similar trend between 2017 and 2019.

Attempts to cut the supply of synthetic drugs need a major shift, say Paisith and UNODC officials say. Arresting street-level sellers and seizing drugs do not get to the heart of the drug industry as organised crime, they add.

Thailand has been pushing for countries to work on cutting the supply of precursor chemicals to the labs and seizing syndicates’ assets, Paisith says. “We found that it (arrests and drug seizures) wouldn’t work. You only can arrest the courier, small drug dealers. You arrest them today, one million tablets of yaba (a mix of methamphetamine and caffeine), they produce in the next day even more,” he said.

“If you address the businesses through which they launder their money, be that the casinos like we see in the Golden Triangle or the online casinos, it’s immensely powerful,” Douglas agreed. “That’s where we have to shift that law enforcement focus.”

A look at where major drug seizures were in 2020 shows that a good number were in or near border areas, around projects aiming to push connectivity through ports, cross-border transport corridors. The Ban Mom port, where Laos seized chemicals in July 2020, was part of a scheme for better navigation along the Mekong River, supported by four countries. The seizure took place at the Thai-Lao Friendship Bridge 4 that crosses the Mekong, says the UNODC report.

This brings to mind discussions around how the same infrastructure that connected Mekong countries since the 90s can also be useful for transnational crime syndicates in drugs and arms, not least in post-coup Myanmar.

At a media event in May, the International Crisis Group’s adviser on Myanmar Richard Horsey said: “The risk of regional connectivity was always that when you have a political economy based on illicit activity, with very powerful armed criminal actors involved . . . this economy was going to take advantage of that and grow with it.”

(*Johanna Son is editor/founder of the Reporting ASEAN series.)