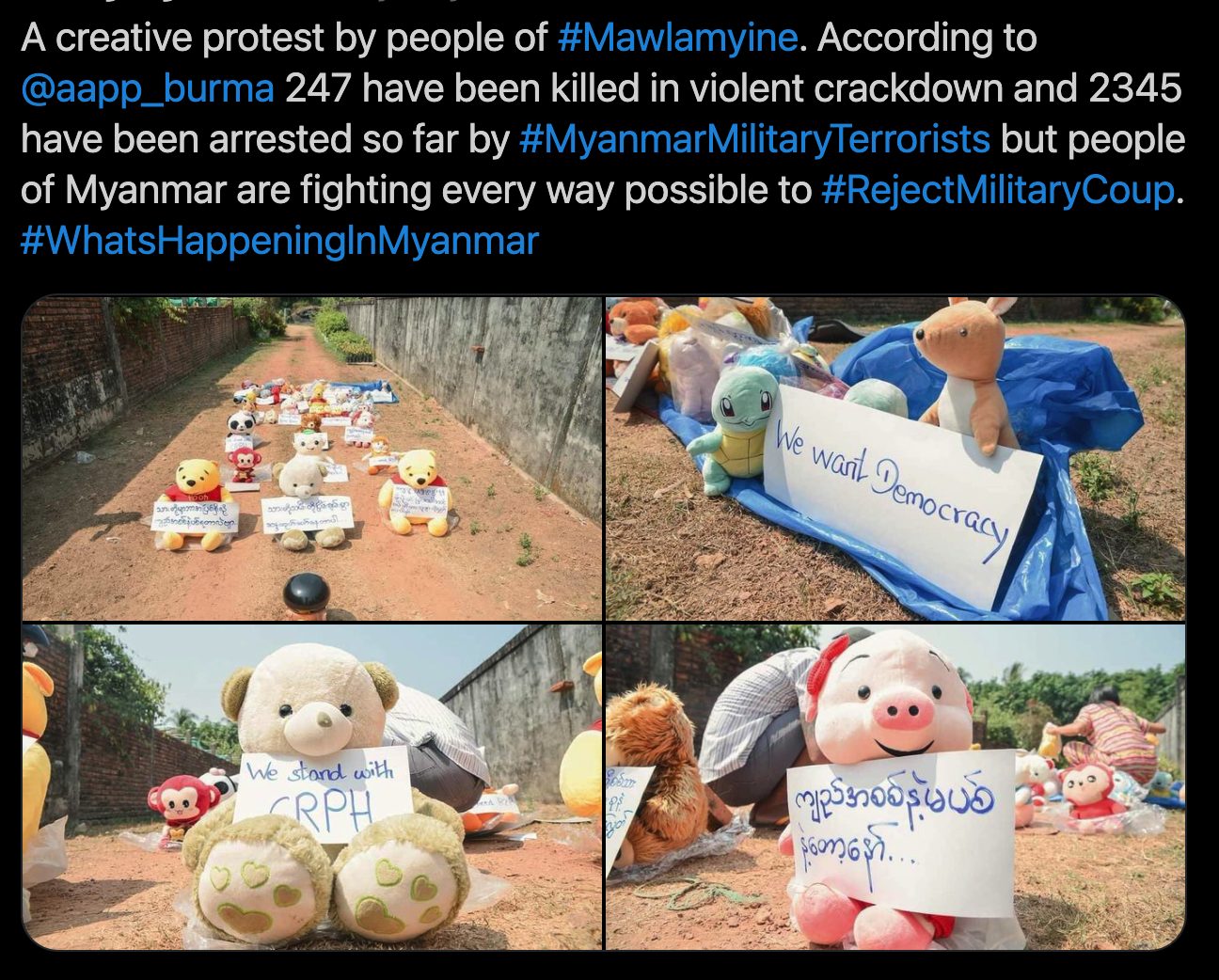 They are street protesters and keyboard warriors, as well as hospital and bank staff and teachers with the civil disobedience movement. Some are night guards watching over their neighbourhoods, while others have been preparing food for protesters, day after day. They provide shelter to young protesters hunted down by security forces, and have been arrested, shot and killed.

From different backgrounds and ages, the women of Myanmar have been a core part of the uprising in the Southeast Asian country, protests that continue despite horrific, brutal crackdowns by security forces nearly two months after the Feb 1 coup by Myanmar’s military.

Over the past weeks, security forces have not only used live ammunition to break up protests and chased protesters deep into residential communities, but resorted to burning and threats to torch communities that have erected barricades against intrusions from the police and military.

More protesters are now trying to defend themselves, using bows and arrows and Motolov cocktails against security forces. All signs point to more bloodshed ahead. Compared to the first few weeks of anti-coup protests, fewer women are now visible in the confrontations with security forces, but they continue to be targets for shootings in the head, beatings and arrests.

Still, many women, like others in the broad-based opposition to the military takeover, say the struggle must and will, continue in whatever form.

“I will have to take part in this movement with every way possible, from joining street protests, supplying food and money and chanting prayers, to using my house as a hideout for the protesters,” said Pyone Pyone, who has been providing food for factory workers who have been protesting daily.

“Issuing warrants or suing me is the job of the military. My job is to carry on people’s revolution and to continue our strike till we win,” read the Mar 13 social media post by 26-year-old Ei Thinzar Maung, for whom an arrest warrant is out for mobilising people to join the civil disobedience movement (CBD).  She was one of the youngest candidates for the Lower House of Parliament in the November 2020 election, whose results have been nullified by the military.

Reflecting on Myanmar’s history, a veteran journalist says that the protests, and the women in them, will persist. “If we study the 1988 uprising, we can see there is a potential for more protests. Deep-rooted anti-coup sentiment can’t be washed away easily. Even though people have backed off because of the recent (violent) situation, they will come back once they get a chance,” said the journalist, who asked for anonymity. “Revolution is like a process. The goal has not yet been reached and the mission not yet completed.”

As of Mar 20, 2,345 people have been arrested, charged or sentenced in relation to the coup protests, of which 1,994 remain under detention, and 247 people killed, says the Assistance Association of Political Prisoners Burma (AAPPB).

A breakdown of Mar 18 data from AAPPB and the Democratic Voice of Burma showed that 81.4% of those killed are men, 11.4% of still-unidentified gender, and 7.2%, women.  About 28% of those arrested have been women, going by data extracted by the Shan Women’s Action Group as of Mar 18.

“Women are generally expected to stay at home and concern themselves with household affairs,” public policy analyst Khin Khin Mra wrote in New Mandala. “And yet, since the early days of the coup, women have been visible opposing dictatorship and participating in protests through, for example the pots and pans campaign, civil disobedience movement and neighbourhood vigilance groups. They are frontline protesters and activists on social media.”

Also at the frontlines in March, near International Women’s Day on Mar 8, was the use of Myanmar women’s traditional sarong or ‘htamein’ as a tool of resistance. Viral photos of rows of sarong strung across streets captured how women used to their advantage the knowledge that male soldiers and policemen find it taboo to walk under female garments for fear of harming their perceived higher status and power (‘hpon’).

Like many others, taking part in protests in Yangon’s outskirts was, until recently, the full-time focus of 23-year-old May Mon, an online transcriber. “I can’t accept the military dictatorship and I can’t accept the rule of ‘might is right’,” she pointed out.

In the protests, she urged civil servants to go on strike and helped block the entrances to government offices and banks. She says she knows she can face charges, or worse, but “if everyone takes part in this movement, we can stop the dictatorship.”

Mya Pwint Phyu is from another generation, but her frustration is the same as that of her younger peers. “As I experienced military rule in my whole life, I don’t want to go back to that time any more,” said the obstetrician and gynaecologist, who was born in 1988, the year of the student-led uprising. She was arrested and held for hours with more than 200 doctors and medical students after a civil disobedience march on Feb 28.

After doctors and nurses initiated the civil disobedience movement, about 400 hospitals, which make up some 30% of the country’s total, stand empty. The military’s order for private banks to reopen by Mar 8 also went unheeded. Many civil servants from the health and education ministries continue to stay away from work. Women make up 63% of all civil servants in Myanmar, according to United Nations statistics.

Teachers, many of whom are women, are furious with the military’s claim – its main ‘reason’ for overthrowing the elected government — that the 2020 vote was marked by cheating and irregularities because they were the ones working in the polling stations.

“We did our best for the election to be free and fair even amid the COVID-19 pandemic. We feel that the military’s justification about the election result is totally unacceptable. We take to the streets and take part in CDM (civil disobedience movement) because we want justice for the election result, and we want to restore the government elected by the people,” said 32-year-old teacher Zin Mar.

In truth, Myanmar’s women have never been far from the conflicts raging in the country, whether through their own experience or that of their friends, family, ethnic communities or beyond. The armed forces’ systematic use of torture and rape in conflict, including in areas where ethnic armed groups have been fighting them since independence in 1948, have been documented in many reports.

These days, anti-coup protesters’ strategies have taken on various forms given the rising violence, expanding to include sit-down rallies at night, or even pre-dawn ones. Candlelight protests are held, as are chanting of prayers during tense nights in this Buddhist-majority country of 54.4 million people.

Myanmar’s women have never been far from the conflicts raging in the country, whether through their own experience or that of their friends, family, ethnic communities or beyond.

Residents have held ‘protests’ by neatly laying out dolls or stuffed toys holding placards out in the streets. In ‘protests of spirits’, dead victims are represented by rows of cards bearing their names.

As the spectre of more violence lies ahead, so does an equally grim reality: more widows and widowers as well as young people who lose their parents and kin, or their lives, to prison or death.

Aye Thu’s husband, 25-year-old Chit Min Thu, died after being shot by police in North Dagon district on Mar 11. She urged him to stay home, but he had told his pregnant wife: “If more people are not going to the protest, we won’t get what we ask for.”

To the reporters who were at her home as she waited to get her husband’s body, Aye Thu asked: “Will we get the democracy for which my husband gave his life?”

(This feature is part of Reporting ASEAN‘s Lens Southeast Asia series, a project with the support of the Foreign Press Center Japan-Sasakawa Peace Foundation.)