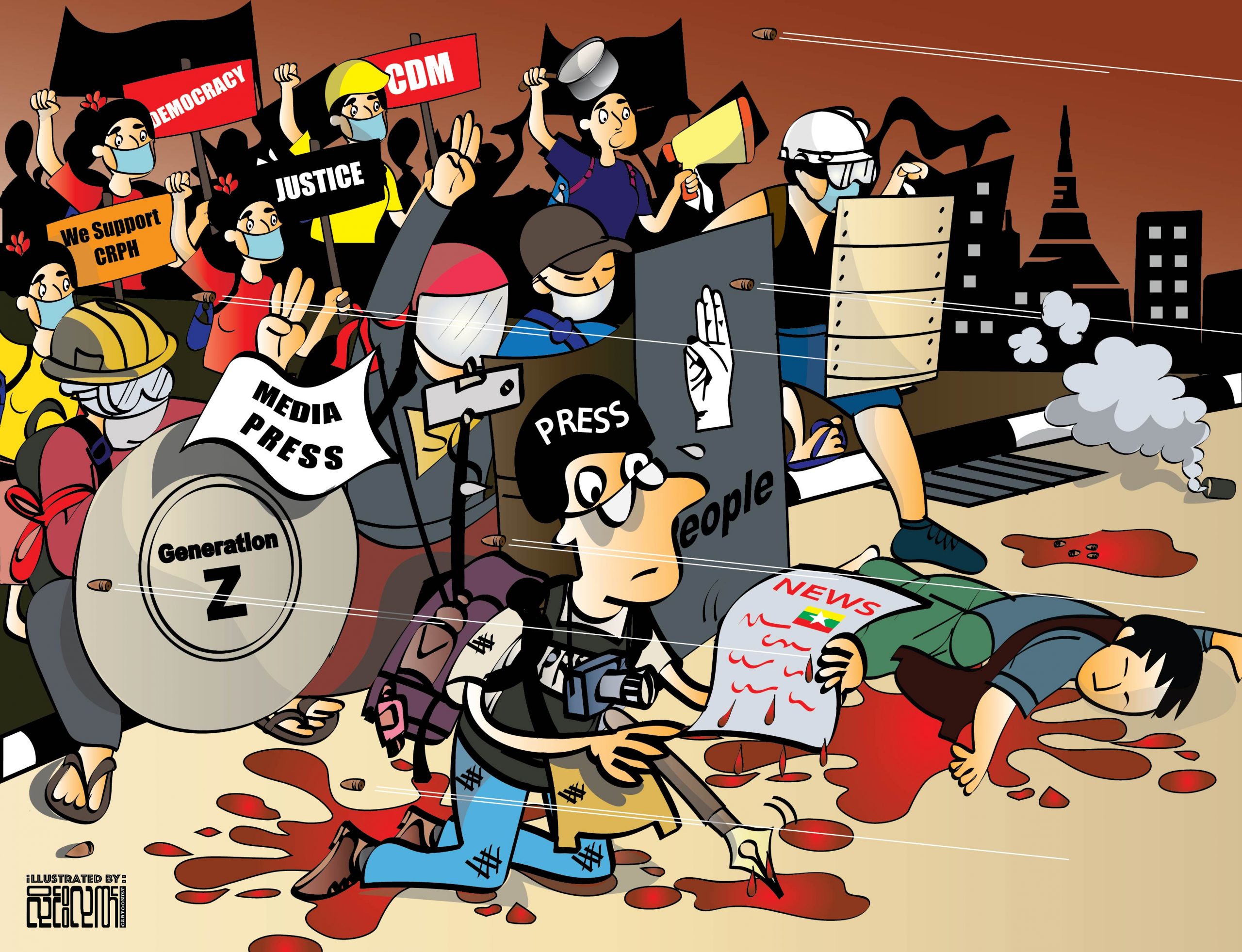 Home » #mediaonmedia » Myanmar: ‘We Will Exist During – and Beyond – the Coup’

Just as the protesters continue rallies and strikes against the Myanmar military’s coup amid the brutal crackdowns by security forces, so have journalists have been pushing ahead and struggling to do their jobs as storytellers. In this toxic situation, media networks and groups continue to sprout up among Myanmar journalists, whether online and on social platforms, and by telephone.

Among these is a group called the Independent Journalists’ Force, which says the military’s crackdown pushed nearly 300 of them across the country to band together. The IJF network was formed on Mar 1, and groups journalists from various media houses and freelancers.

In a Mar 9 statement, it condemned the revocation of media houses’ licenses and raids on news offices, and the arrests and suing of journalists. As of Mar 14, 41 journalists have been arrested after the coup, of which at least 17 are still detained, according to the freedom of expression group Athan.

Here, Reporting ASEAN talks to a journalist with the IJF about the media situation in Myanmar, journalists’ place in the uprising and what lies ahead. (In the interest of safety, the journalist’s name is not being disclosed.)

Johanna: It’s six weeks since the coup and as many had expected, they are coming after the professional media. Could you describe the sentiments of journalists?

Journalist from IJF: We all have planned. . . since a situation in which the military junta will close down, raid media offices and arrest (journalists) was expected. We all feel sorry for those arrested, but all the journalists have decided to conduct their duty (too), which is to give the true information to the public by keeping in mind that the military council must be toppled and military authoritarianism must fail.

How would you describe journalists’ degree of fear/worry, but also their determination to continue doing news?

For the question of fear/worry degree, the journalists have no fear or worry. The fact that the information is reaching all over the world is proving that. Journalists will continue writing the news with any available means in order to reveal true information.

Journalists may not have totally surprised by the crackdown. But are there other moves by the Myanmar militarythat have shocked or surprised you?

Of course, we are not surprised by the crackdown on media since this was expected and by (any) conduct by the junta.Only the military authoritarian (regime) is shocked at and afraid of the protestors on the street, such as those joining the CDM (Civil Disobedience Movement), the CRPH (Committee Representing Pyidaungsu Hluttaw, which seeks recognition as the legitimate government of Myanmar) and the local journalists, who are doing news to let the world know the situation in a timely way. Now, due to the efforts of the journalists, the information that can pressure the junta is spreading all over the world.

Do you feel that Myanmar’s society sees the value of journalism and supports you, even if the civilian-led government of the National League for Democracy did not exactly create a healthy environment for media work and independent news?

You can see the posts on social media asking the media to come to the places where the crackdown of the armed security forces is happening. Moreover, see the comments under the posts about crackdowns by citizen journalists. They mention the well-known media. This is the example of the value shown by the public (toward media). The public not only recognizes the media which stand with the people, but also does social punishment on those which give legitimacy to the coup.

As it seems like the military is determined to dig in, it may be that things get worse before they could get ‘better’. What scenario do you see for Myanmar media in the next six months?

Every journalist predicted that the military council will oppress the people’s media till they stop. The news media have prepared for that. In Myanmar, there has been a history (that) journalists overcome any coup or oppression by using all methods. Now, in 2021, as the technology is strong, the true information will come out anyways – notwithstanding the crackdown by the military council.

As for the question about six months’ time, the junta should answer if it can last for the next six months under this huge pressure. The media will still be strong on any platform and anywhere, by writing and broadcasting.

Are we heading toward a return of the exiled media, like after the 1988 uprising? What is the same as that time 33 years ago, and what might be different today?

I believe there will be no exiled media. In 1988, the local media did not have the access to technology and any modern platform. Now it is the 21st century. We have professional journalists, technology and platforms. As for the word ‘exiled’, the world today doesn’t have ‘inside’ or ‘outside’. A media office now (works) based on what (happens) inside and outside the country. Likewise, an individual (can) now reveal information to the world, along with the journalists, by using modern technology. This is the current situation, totally different from 33 years ago.

Many groups outside have issued statements and words in support of journalist colleagues in Myanmar. What would be of most use to you on the ground – beyond words and reposing information about the media situation there?

The support from the groups outside really encourages the journalists on the ground. We want to say ‘thank you’ for that. The information collected by the journalists has to reach to the world. To prevent this, the military group is doing the internet shutdown at night, and the internet slowdown. The international pressure to fully open the internet will be more practical and useful. It is necessary to continue the current pressure.

Independent journalism has not had a long history in Myanmar, just since 2010 or 2011. Can the profession of journalism – meaning that individuals can make a living from it and a professional news sector can exist – can survive this coup?

The professional and independent media will still exist in Myanmar. This is unquestionable. Now, most of the journalists are young people and (from) Generation Z, who stands with the truth. Also, there are many freelance reporters. They are (letting) the media offices use information (they provide) without consideration of any risks (to themselves). This is obvious (just) by looking at them (journalists) who rely only on the meals donated at the protests.

All the journalists agree on the point that the military junta must fail, and (that) they have to record the military council’s misconduct and crackdown on the peaceful protesters. They are also trying to abide by the (news) ethics. So, the professional media sector will still exist in Myanmar – both during and beyond the coup.

(END/Text has been shortened and edited for clarity.)