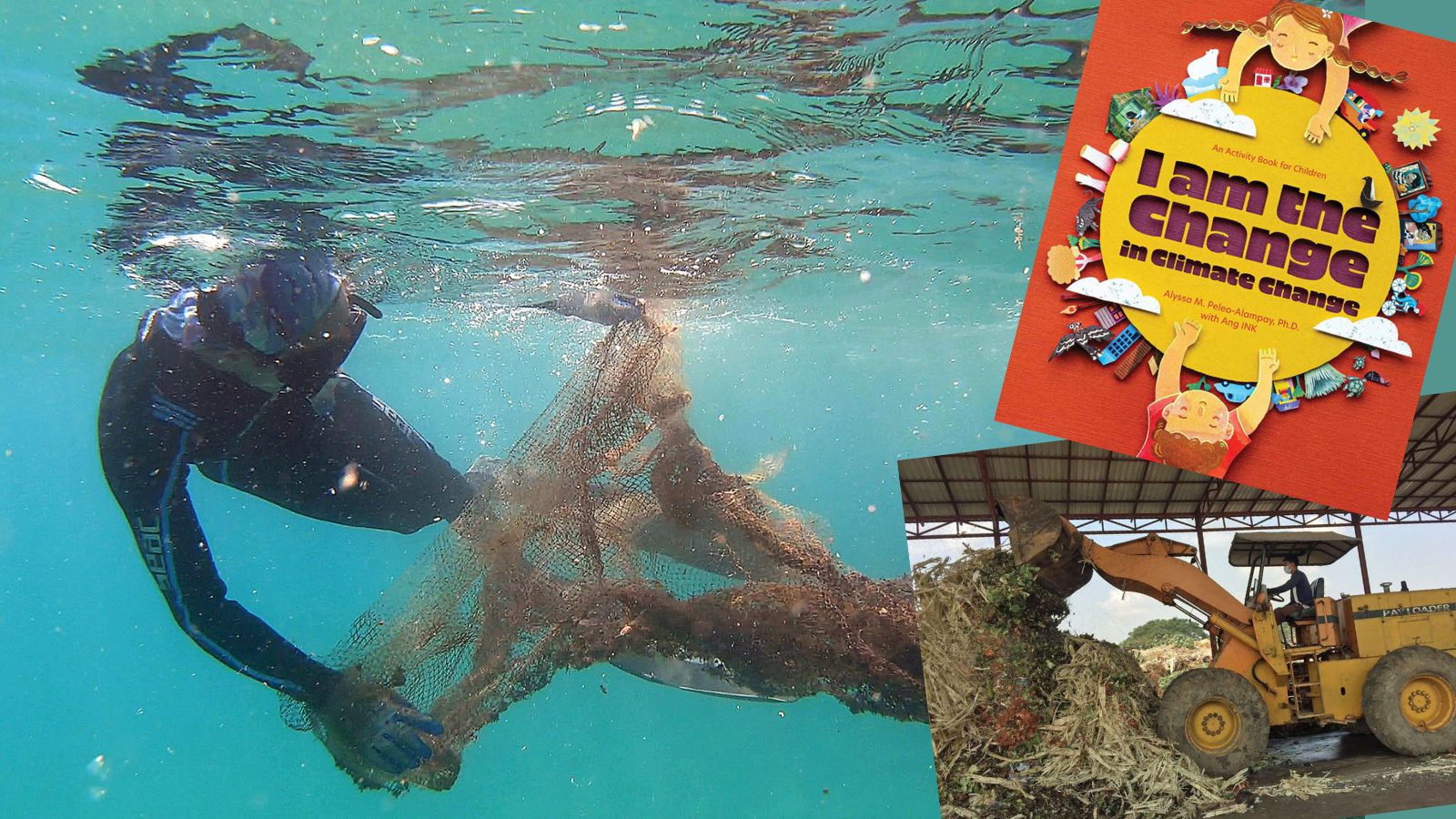 Two years into COVID-19, phrases like ‘greener recovery’ and ‘building back better’ may well be turning into tired slogans, weighing heavily on equally weary people around the world.

But sustainability continues to be a mantra of sorts through the pandemic. In some webinars about COVID-19, discussions of lessons learned and ways of recovery were infused with hope, and in others they were tempered with scepticism about, well, the ways of human nature. In still other venues, individuals spoke resolutely about changing our ways. Some drew up a list of to-dos for ‘when this is over’.

But ‘when this is over’ lies in the unknowable future. Still, the coming of a new year is a good time to remind ourselves of the ways – big or small, public or private – in which we can lighten the destructive weight that our way of living forces the planet to bear.

From a group that rescues stranded whales in Vietnam, to a book in the Philippines that explains climate change to children and an initiative that connects waste management to greener agriculture in Cambodia, below are examples of some efforts to tread more lightly on today’s nervous Earth.

It was a stranded, injured whale on a beach in Vietnam that led Chien Le to shift from being an information technology engineer to an environment advocate.

That experience – the whale died a few days later near My Khe beach in central Da Nang province – pushed him to set up the Sasa Marine Animals Rescue Centre in 2018.

Named after the whale Chien had called ‘Sasa’, the non-profit centre now organizes the rescue of stranded marine animals and the revival of damaged coral reefs and seagrass beds, which are feeding grounds for various marine species off Da Nang’s popular beaches.

The plight of marine animals cannot be separated from the state of their environment – looking after them means tending to the ecosystems they are part of. This linkage is key to the Sasa centre’s work in getting the public involved in caring for the coastal and marine environments that are crucial to fisheries, food, recreation and tourism in the local community.

“The current situation of marine [environment] damage in Vietnam is a big motivation for our actions,” said the 38-year-old Chien. “As independent researchers, we see a clear connection between marine animals and coral reefs. We find them and the ocean to be interconnected to each other.”

The diverse mix of marine life that Sasa typically rescues in a year looks like this: 16 to 20 sea turtles, 8 to 10 dolphins, two whales, billions of coral polyps and innumerable shrimps and crabs trapped in ghost nets, or nets that have been left on beaches or at sea.

While coastal residents know that their environment sustains their lives, they do not always know enough about how it functions. This is not surprising since schools do not always teach students about the ocean and its animals, Chien adds.

But locals grasp the situation first-hand when they see the progress in the Sasa team’s work, which includes the regeneration of coral reefs and seagrass beds that have been destroyed by waste disposal, careless tourism and destructive fishing practices.

“Given the fact that the seagrass bed in Da Nang has nearly disappeared and 80 percent of coral reefs are degraded, the task of regeneration is the most imperative, along with equipping fishermen and the youth with knowledge,” Chien said.

The Sasa team says it has seen some 14,000 coral fragments recover and their reefs survive at a nearly 100% rate, within a six-month period. Each month, its nursery produces 6,000 coral branches, which are then transplanted onto the damaged reefs.

Sasa staffer Long Nguyen agrees that locals have a responsibility in reversing human-induced damage to marine resources and in shifting to more sustainable fishing methods. “My family and I are fishers who are able to recognize the benefits of the sea (as well as) its changes due to destructive human activities,” said Long Nguyen, who does outreach work with other fishers.

PHILIPPINES: BE THE CHANGE

Carrying children’s books across kilometres of muddy terrain and rivers and distributing them to urban communities are not the type of activities one usually associates with geologists. But these are exactly what Alyssa Peleo-Alampay, a professor at the University of the Philippines’ National Institute of Geological Sciences, does.

Among the titles inside her backpack on her hikes outside the Philippine capital Metro Manila is an illustrated book that she wrote for children, entitled ‘I am the Change in Climate Change’.

The 68-page, richly coloured book sounds the alarm on the detrimental effects that we have been experiencing due to climate change. More importantly, it gives its young readers concrete ways to prevent the situation from getting worse, such as using less plastic to conserving electricity at home.

“[I believe that] no matter who you are, you can be a change agent,” said Peleo-Alampay, who holds a doctoral degree in earth science from the Scripps Institution of Oceanography at the University of California, United States.

As a scientist, Peleo-Alampay knows all too well that the rapid changes in our climate over recent decades can no longer be attributed to natural patterns. As a teacher, she imparts this knowledge with a lecture on climate change at the end of each semester.

“University teaching really was, I think, my calling,” she explained. “I really feel that I want to effect change, no matter how small or how big it could be.”

‘I am the Change in Climate Change’ was published in 2021 by The Center for Art, New Ventures, and Sustainable Development (CANVAS), which promotes children’s appreciation for art, culture and the environment as well as reading as a habit, especially among youngsters in disadvantaged settings.

CANVAS works with the artists’ group Ang Ilustrador ng Kabataan (INK or The Illustrator for Children) to create itsbooks. Peleo-Alampay distills her climate change lectures to the basic facts and shares them with the INK artists, who then create visual interpretations of various concepts.

While she leaves out some of the more technical terms from the book, Peleo-Alampay says the scientific integrity of ‘I am the Change in Climate Change’ holds. She does not shy away from using ‘big’ words such as “vector-borne” or “coral bleaching”, trusting in her young readers’ curiosity to discover the meaning behind these.

“It was a struggle for me as a scientist (to leave out certain ideas),” she said. “But I knew that when we toned down something, we had to make sure it was not inaccurate.”

‘I am the Change in Climate Change’ is an activity book as well, signaling to young minds that while climate change can be scary for some, they are not helpless. “[It’s] a children’s book that can reassure children that even though climate change is already happening, there are things they can do to adapt, to hope and to do their part,” said Gigo Alampay,CANVAS’ founder/executive director and Alyssa’s husband.

CAMBODIA: FROM TRASH TO FERTILIZER

Every day since 2009, piles of organic waste – collected from local markets – are strung together and allowed to decompose for up to 16 weeks at a facility in Cambodia’s north-western Battambang city. When ‘ripe’, what has become compost fertilizer is sold to farmers.

This take place at the compost facility that was started by a local non-profit called Cambodian Education and Waste Management Organization (COMPED), one that can process up to 25 tonnes of organic waste a day.

This processing of waste is part of an initiative that involves residents in addressing interlinked issues: waste accumulation, groundwater pollution, and overflowing landfills that emit methane. Composting comes with a bonus too, leading to the production of organic, cheaper fertilizer that makes for healthier soil.

“Compost is natural, and more and more people understand the benefits and switching to using more compost,” said Agang Hem Alvin, founder of Dam Dous, a startup that provides services for urban home gardening and has been using fertilizer from the compost facility since 2019.

“It is good to turn organic waste into compost fertilizer. It is better than throwing it away. It helps reduce waste and is good for the environment,” he added.

Inside the facility that stands next to the Battambang city landfill, the sorted waste coming from three local markets are shredded and packed into stacks, each of which is one metre high and three metres wide. Over time in a process called ‘open window fermentation’, workers shift these piles regularly to ensure exposure to oxygen, which hastens decomposition.

Battambang city, which is Cambodia’s third-largest with over 150,000 people, produces 140 to 150 tonnes of waste daily. (Cambodia generates at least four million tonnes of solid waste every year, the World Bank says.)

Of these, 65% are organic, 15% are plastic, glass and paper, and the rest are of various types, says Sam Phalla, director of Environmental Education and Recycling Organization (COMPOSTED). He used to be vice director of COMPED, which has since been divided into two groups that have recycling activities in Battambang province.

Treating organic waste extends the city lifespan of the city landfill and helps prevent unmanaged waste from contaminating groundwater, which poses a health risk. It also contributes to curbing greenhouse gases that come from landfills, where mountains of waste pile up.

“Organic waste, when the natural decaying process is not possible due to the lack of oxygen (it is exposed to), produces methane, a greenhouse gas which worsens climate change,” Phalla said.

While organic waste treatment can be done using machinery and electricity, he says that this more natural, if slower, way that is composting is a better fit for the country of 17 million people.

The lower cost of this process keeps the price of the fertilizer it produces within the reach of small farmers, Phalla adds. A 5-kilogramme bag costs 20,000 to 25,000 riel (4.90 to 6.13 US dollars). “Their compost fertilizer is up to standard. When use, it does not cause the plants to be rotten. I can use (it) with expensive plants,” said Dam Dous’ Agang Hem Alvin.

Waste management starts at the individual level, when people reduce waste, reuse and recycle materials, Phalla says. He added: “composting can be done at home or at community.”

(*This feature is part of the Reporting ASEAN’s Sustainability Series, supported by the Heinrich Boell Foundation Southeast Asia. This team feature was put together by Johanna Son (Bangkok), with reporting by Uyen Diep (Vietnam) and Owen Santos (Philippines) and a contributor in Phnom Penh (Cambodia).