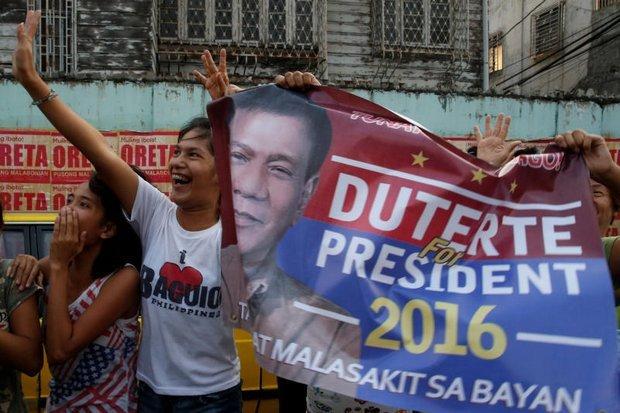 BANGKOK, May 12 – Just months ago, Rodrigo Duterte, the Philippines’ next president, had been saying he would not run for the country’s top post. “The country does not need me. I find no need for it,” he said, adding that he wanted to retire after more than two decades as the popular, tough mayor of southern Davao city.

But today, judging from the tally of votes with nearly all ballots counted, the Filipino electorate believes it needs as president a rebel like the 71-year-old Mr Duterte, despite his tasteless and offensive comments as well as promises to be a dictator in order to stamp out crime and corruption.

Non-Filipinos are scratching their heads, puzzled by how the electorate in Asean’s second most-populous country of 100 million people can so resoundingly vote for what seems to many a strange or downright comical choice.

But look past Mr Duterte’s macho comments, and the message is quite clear — and part of another tough lesson in how good governance needs to be part of a working democracy.

Anger and frustration — the feeling of being totally fed up — has been consistent through this poll campaign, leading to the victory of a guy viewed as an outsider to the political culture, a rebel, a political heretic. Simmering for decades, this frustration exploded in the May 9 election, exactly 30 years after the 1986 “People Power” revolt that ended a dictatorship and restored democracy.

Voters used their ultimate weapon, the ballot, to effect change they wanted. In the process, weaving a plot like the soap operas Filipinos follow, they threw out the government of Benigno Aquino III, son of Corazon Aquino who led the 1986 uprising.

Elected in the wave of sympathy after Corazon Aquino’s death, Benigno Aquino’s government was often perceived as self-righteous, divisive and vindictive, despite the Philippines’ impressive economic performance.

One wonders if Mr Duterte, a lawyer and a former city prosecutor, is surprised by his rise to the presidency, over some two months. Unlike others who peaked then tumbled from the top slot, Mr Duterte peaked and stayed there despite his tactless tongue — including a quip that he should have had the first turn in raping an Australian missionary raped and killed in a Philippine prison in 1989.

International media reports have focused on Mr Duterte’s remarks that upset women’s groups, neighbouring nations and human rights advocates. But given the mood at this point in history and the Filipino psyche, voters looked beyond his tasteless comments and perhaps even found him a better choice because of his ability to thumb his nose at the status quo, and cast him as a protest vote. A shake-up-the-system vote.

To many, Mr Duterte is their bad-mannered neighbourhood thug, feared by all. But he is their thug, so that when he takes matters in his own hands, they feel he is doing so to protect them. Yes he is a bully, but “he is our bully”.

If many are horrified by his comments about women, his supporters see them as sound bites. What some find obscene, supporters find homespun and harmless. Many focus instead on what they say are core issues the more suave candidates do not get: everyday crime, safety and poverty. Personal safety is a right too, and voters felt that they were not being heard on this.

To understand how raw Mr Duterte’s appeal is on crime and orderliness, consider that his having made Davao the only place where a no-smoking ban is truly in force is nothing less a heroic feat in a country where bans are routinely ignored. In turning Davao from a city of killings to one of the safest places, Mr Duterte says unapologetically that this was done with the use of vigilantes.

He is a protest vote to many for reasons not easily evident to outsiders. Duterte — “Du30” to supporters and “Dirty Duterte” to detractors — is from the southern Philippines, while most presidents have been from the northern parts. He speaks Tagalog with a southern accent because his mother tongue is Visayan. He uses conversational language and resorts to injecting English into his Tagalog (Taglish) instead.

For all his bluster, supporters find him humble. “I do not have the extra qualifications to be really a leader,” Mr Duterte said at his last campaign rally. In Taglish, he added: “What I have is an ordinary leadership. If I can lead this nation to di naman [not really] greatness, but I would like to promise you a comfortable life under me. Just a comfortable one, with food, not too much crime, and illegal drugs, I will suppress to the very minimum.”

As the reality of presidential duty nears, Mr Duterte has said, “I need to control my mouth”. The presidency is different from the campaign trail, he added.

Concerns persist about the human rights aspects of how a Duterte government will address crime and drugs. He has called for a ban on alcohol, which he links to crime. His team has talked about a change to a parliamentary system because Mr Duterte is a firm advocate of federalism and local autonomy away from the capital, Manila. Accusations remain unresolved about bank accounts that Mr Duterte did not disclose as a public servant.

But as the Philippines’ political temperature cools after this vote, Mr Duterte should know that every Filipino is watching to see if his bark is as bad — or as good — as his bite. After a poll that was a national catharsis for voters’ frustration and impatience, he must remember that Filipinos can and will out boot out leaders they tire of. After taking back their democracy in 1986, Filipinos remain hungry for much better governance. This is the tiger Mr Duterte has ridden, and not one he can easily dismount.

A version of this article was first published in the ‘Bangkok Post’ and can be viewed here: http://www.bangkokpost.com/opinion/opinion/969069/voter-anger-frustration-drove-duterte-to-the-presidency