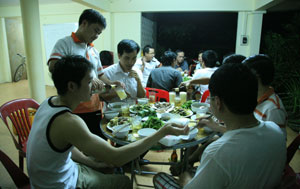 He misses his beloved ones dearly. But he also does not want to miss the good opportunities on offer to him in Laos, almost 800 km away from his hometown.

Hoan is one of 140 employees of the Viettel Telecommunication Group working in Laos as part of a joint venture with a Lao company in supplying phone and internet services.

Better money is just one of the advantages the 29-year-old accountant finds in the neighbouring country. “A promising job opportunity is another. It’s a rare chance to take on bigger role.”

Hoan proudly reveals that he has been chief accountant to the company in Laos, which has yearly turnover of 3 trillion Vietnamese dong (143 million US dollars), for more than two years. “If I was in Viet Nam, I would probably be working as an accountant at a branch office only,” he says.

Hoan shares with 20 other colleagues, all Vietnamese, an old French-styled villa in Phonexay Village, Saysettha District right in the heart of the administrative capital, Vientiane.

Unlike the usual stereotype of “poor” Vietnamese guest workers living in cramped boarding houses and sharing plain food, Hoan is in a spacious three-storey house with about 10 bedrooms and tasty food provided by a Vietnamese chef, also brought in from home.

Under the 2006 law that allows Vietnamese to work abroad, Hoan and his colleagues in Laos are one of four categories of “exported labour”. They were brought to Laos by contractors or investors in foreign-invested projects.

Most of the 11,000 Vietnamese workers in Laos currently belong to this category, said Dao Cong Hai, deputy director of the Department of Overseas Labour under the Vietnamese Ministry of Labour, Invalids and Social Affairs.

Labour offices in both countries estimate that the figure has been increasing over the years in tandem with demand for growth in this emerging nation.

This is despite the fact that Vietnamese businesses, like all foreign investors in Laos, have a cap on the number of their own nationals they can bring in to work on a project. Their number must be no more than 10-20 percent of Lao workers on the job.

“The limit is because foreign workers are expected to train Lao workers during their (the foreigners) two to four years service,” says Keo Chanthavixay, deputy head of the Lao Department of Skills Development and Employment.

Vietnamese workers in Laos are mainly involved in agriculture, forestry, construction, mine exploration and telecommunications – or services such as banking and insurance. According to Chanthavixay, Vietnamese workers are industrious, highly-skilled and fit in with the demands of the country.

“They have made great contributions to our nation’s development, especially in industries where skilled workers are needed,” she says. “Their role has been well recognised throughout our society.”

To Hoan and his friends in Laos, better pay and job prospects are not the only impetus for them to leave their families and endure homesickness. “Living here enables us mingle into Lao culture and learn more about their lives and customs,” Hoan’s co-worker and room-mate, Nguyen Van Thong says.

“There’s one thing: We can speak English much better than working in Viet Nam because we only know a little Lao,” he adds. Thong says there is a big Vietnamese community in Laos and basic Vietnamese goods are on sale, so life is easy.

According to Hai from the Vietnamese labour ministry, Viet Nam has 500,000 workers working under contract in 40 nations and territories world-wide. Remittances they send home each year are worth a total of 1.6-2 billion dollars, which is a vital part of the economy.

Seventy-five per cent of this half million are manual labourers, who lack skills, foreign languages, and sometimes a good working discipline, Hai says.

“We aim to raise the ratio of skilled workers and professionals being sent abroad, but it requires an all-out effort. It is hoped that after several years working in a foreign country, which is a real-life training school, skilled workers will be able to return home as senior staff to help develop national small-and-medium enterprises,” he says.

But there is little opportunity at present. A large number of Vietnamese workers have opted for wealthy regional nations such as Japan, South Korea and Malaysia, which are more in need of low-skilled workers. Hai says the Lao market is among a few that Viet Nam can rely on as a place to send skilled workers. The two countries share a border and there are long-standing friendly ties with the Lao people.

Nguyen Xuan An, general secretary of the Viet Nam Association of Manpower Supply, says that apart from companies with invested projects in Laos, none of Viet Nam’s 172 enterprises specialising in labour export have become involved.

The biggest movement of skilled and professional workers in the labour market is imminent. Viet Nam, together with nine other ASEAN nations, has agreed to allow citizens from member countries to work freely in each other’s country by 2015. The scheme, initiated by ASEAN leaders in 2007, is one of the main steps in the establishment of an ASEAN Community by 2020.

“We are deeply anxious in joining the scheme,” says Chanthavixay from the Lao labour ministry, “since our workers have pretty low qualifications and skills. While we strive hard to raise the level of our workers’ skills, we need to rely on support from other countries, like Viet Nam.”

The re-signing of the 17-year-old Viet Nam-Laos Labour Cooperation Pact this year is also expected to open a new chapter in skills sharing skills.

(*This story and photos were produced under the Reporting Development in ASEAN series of IPS Asia-Pacific, a programme supported by the International Development Research Centre.)