Home » Features » Vietnamese in Laos: Studying Away from Home

VIENTIANE, Sep 6 (Reporting ASEAN) – The Lao capital Vientiane has been home for five years to Ha Phương, a nine-year-old student at Kiettisack International School. Her parents, both doctors, work at the Hanoi-Vientiane General Hospital. 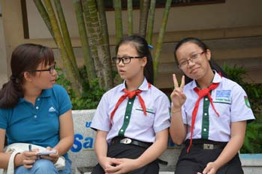 Phuong has formed friendships with the children of her parents’ colleagues. She speaks Vietnamese and eats Vietnamese food. But at school she studies in Lao, one of three other languages she speaks apart from her native Vietnamese. She also speaks Thai and English, taught at school.

Born in Ha Tinh province in the north-central coast of Vietnam, Tang Thi Quynh Anh is a sixth grade student at the Nguyen Du Vietnamese-Lao Bilingual School. Her mother, who is also Vietnamese, teaches at the school.

“There are many Vietnamese students here, so I don’t feel alone. My friends’ parents are working for Vietnamese companies or trading stuff,” Quynh Anh says. “At this school, we often celebrate the festivals of both countries. We have two Happy New Years, two Teachers’ Days, two Independence Days.”

On May 19, “we joined a competition on creating news bulletins to celebrate Uncle Ho’s birthday,” she recounts, referring to Ho Chi Minh, the revered nationalist leader and former president of Vietnam.

She adds that aside from her Vietnamese name, she also has a Lao name, Alina. “I love both names,” she says.

In Laos, the schoolyear ends in June while summer lasts until mid-August. This is the favourite time of Vietnamese teenagers living in the country known for its national flower, dok champa, because that is when their parents take them back to Vietnam.

Dang Ha Phuong, a Grade 6 student at Nguyen Du school, says: “Within the year, my parents sell electric fans at the Laos-Vietnam border, while I and my seven-year-old brother live with our grandparents in Vientiane. “Since summer is the rainy season, our parents don’t buy and sell stuff. We all go back to visit our grandparents on my mother’s side in Ha Tinh province.”

Once back in the province, she says, she gets to play with her cousins, “visit here and there” and enjoy seafood like shrimps and squids, which she craves and misses in landlocked Laos, which has no direct access to the sea. “So delicious!” she says.

For Ha Phuong, a student at Kiettisack International School, summer is when she gets to study her mother tongue, because her school in Vientiane does not teach Vietnamese. On returning to Vientiane, she is more confident to show her parents what she has written in Vietnamese while enjoying the summer vacation in her homeland. 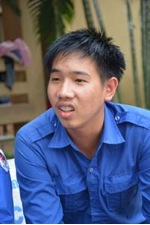 Khamsay talks about missing his grandparents in Vietnam Photo: Sithong

To Khamsay, a ninth grader at Nguyen Du school, summer does not only mean school break. It’s also the time to return to Thanh Hoa province to take care of his grandparents. While both of his parents are busy trading in Laos, his grandparents stay with relatives. During summer with his grandparents, Khamsay does farming and raises cows. This is a good experience, he says, for because Vientiane does not have green fields.

“My parents come home once every three years because they are very busy (in Laos). Every year, I take advantage of the summer time to take care of my grandparents, who are both 90 years old. “Who knows how much longer they will stay with me?”

In general, Vietnamese teenagers like Khamsay who live in Laos enjoy better lives because their parents have higher incomes. But wherever they go, their country will always beckon them home, especially during summer, which offers them a great chance to enjoy life in their homeland.

To read the other two parts of the story, click here and here.

*The original Vietnamese version of this article was published in ‘Red Scarf’ magazine. This feature was produced under the Reporting ASEAN project run by IPS Asia-Pacific and Probe Media Foundation with the support of the ASEAN Foundation and Japan – ASEAN Solidarity Fund.