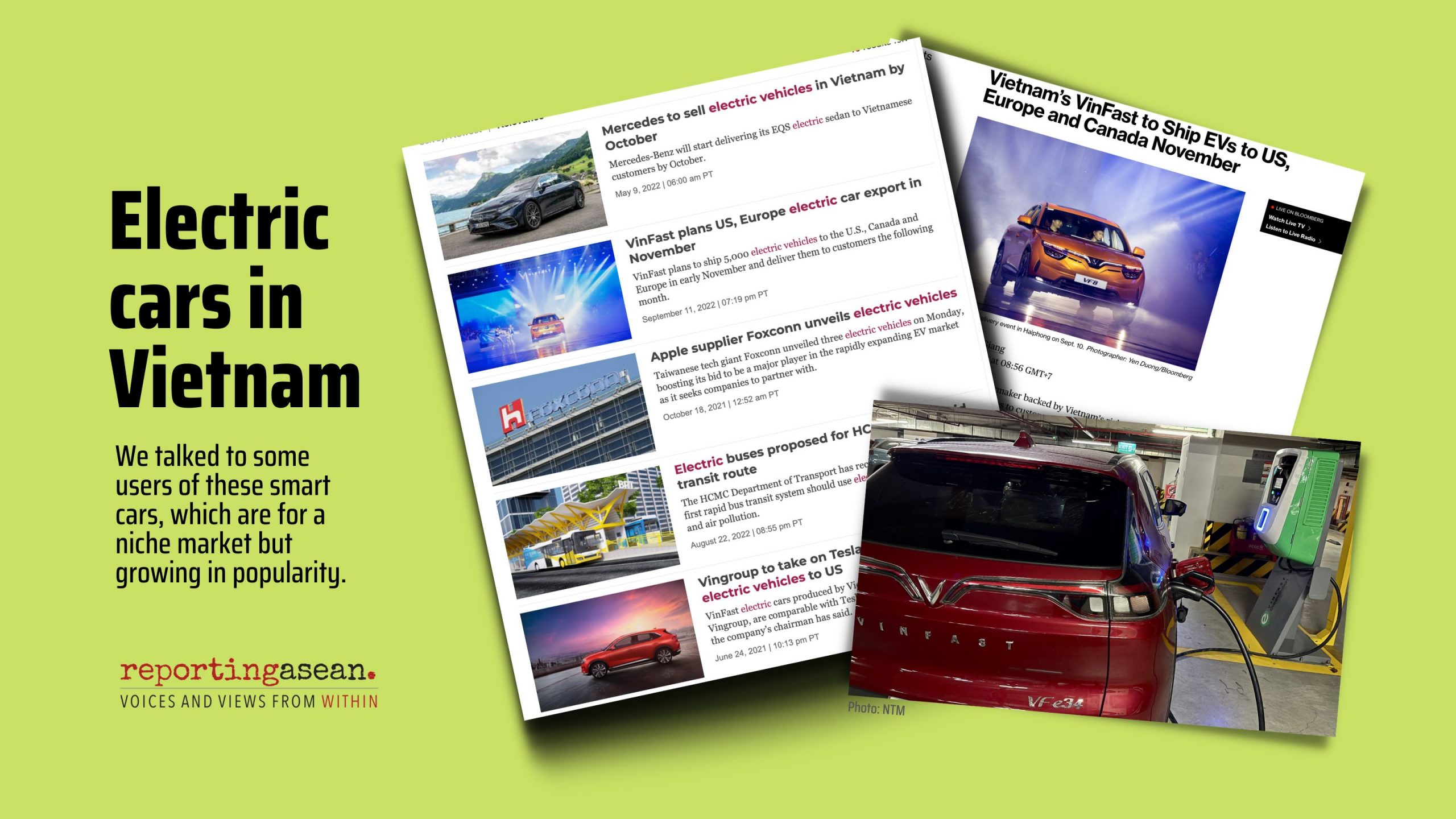 Home » Features » VIETNAM: ‘Why Don’t You Get an Electric Vehicle?’

At first, it seemed it would take forever to find an electric vehicle (EV) user in Ho Chi Minh City, formerly or still widely known as Saigon. In June, I sent out a bunch of messages to try to find someone who is using an EV, but the responses were not encouraging. “EV… what? No, I don’t have such a car,” many said. Others said they did not know anyone who had one.

“My electric scooter has already given me such a nightmare that I can’t imagine how much trouble an EV (car) would be,” said one woman in her twenties. She was actually trying to sell her scooter after its battery conked out, leaving her stranded for hours in the middle of a busy road.

In August, however, my inquiries produced very different results. I spoke to several of Vietnam’s first locally manufactured electric passenger car, the VFe34, and rode in one.

“Is that so? Maybe I follow you and reserve one,” Nguyen, a business owner in his 50s, recalls telling a friend who had just booked among the first electric car units to be produced by local automaker VinFast in southern Ho Chi Minh City.

That was in March 2021, when VinFast, the Southeast Asian country’s first indigenous automaker that has set its sights on the global electric vehicle (EV) market, had opened up the reservation queues for its first electric passenger car.

Nguyen (who asked to be identified by this name) made his booking, got queue number 39 and shared this in a technology group on Facebook, recalling this story in a coffee shop across his office in Phu Nhuan district.  It was a trend at the time to show off one’s EV reservation ticket in social media. The booking fee was 10 million Vietnamese dong (440 US dollars) – or less than a third of the price of a iPhone 12 Pro Max at the time.

Nguyen’s fully electric VFe34 sedan was delivered in March 2022, and is one of two VinFast electric car models that are being delivered to customers.

The VFe34 is Vinfast’s first smart electric passenger car, in production since December last year. It has delivered 2,288 units of this model as of July 2022, VinFast says.

As a VinFirst Pioneer, or the first generation of customers, Nguyen paid a promotion price of 495 million dong (21,200 US dollars) for his new car – half the price of a similar but gas-powered vehicle in the market at that time.

Meantime, business executive Phan Quang Duc cannot wait to drive the VF9 electric SUV that he ordered after VinFast announced it in 2021. The wait will be “worth it”, said the chief executive officer of Amtec Electronics Corp, based in southeastern Binh Duong province.

“Within my business circle, electric cars are now a hot topic of discussion. I can say around 70 percent of the people I know think of having an EV in their garage in the near future,” Duc said. “Whenever someone within (my) circle buys a new car, the most frequent question these days is ‘why don’t you get an EV?’ ”

The ride in Nguyen’s sedan was my first in an electric car. In the mobile-first environment of this ‘smart’ vehicle, a whole lot revolves around the owner’s smartphone. Want to check on your car’s status or charge level, or find charging stations? Go to the app that comes with the car. Driving alone and feeling bored? Instruct your EV to search the internet for just about anything. (Nguyen asked it to call up funny stories.)

What is called the car’s intelligent eco-system has a voice that greets you when you start it, and adapts to the driver’s tastes. You can choose its Vietnamese accent as well – northern or southern?

Nguyen says he uses solar panels on his rooftop of the two-storey house that is his office to charge it during daytime – at no additional cost. This appears to be a handy option at a time of rising fuel prices, and when Vietnam is leading Southeast Asia in pursuing the use of rooftop solar facilities.

Nguyen, who says his wife drives the VFe34 more than often than he does, finds electric cars more suited to city driving. But this is not the case for Tran Nhat Huy, who often drives his VFe34 to other provinces. Frequent long drives are routine for the contractor, who travels to Buon Ma Thuot, the capital of Đắk Lắk province that is some 340 km from Saigon, to check on the construction of a fruit processing factory.

An EV owner must try one’s best to “understand” it first, and ensure that it has the latest software update to fix errors or defects, advises Huy, who is in his mid-forties and estimates he has owned 20 cars thus far.

In Huy’s experience, it takes 20 hours to get a full charge with the 42 kilowatt-hour lithium-ion battery pack from VinFast. This slower speed uses power equivalent to a household stove to avoid overloading the electricity grid that homes are connected to.

Huy has a third-party battery (7kWh capacity) that charges in under seven hours, letting his car travel about 280 kilometres.  At one of VinFast’s charging stations with more capacity, his VFe34 would take just 1.5 hours to charge.

Huy is also waiting for the delivery of another electric car – a VF8 sport utility vehicle, which has larger battery capacity. VinFast made the first 100 deliveries of this five-seater model on 10 September, ahead of exports to start in November.

The use of electric vehicles has been picking up as part of decarbonization efforts across the world, at a time of climate emergency and as part of states’ international commitments to climate action.

Many governments have provided incentives and mechanisms to encourage a shift from the use of fossil fuels in transportation, which contribute to greenhouse gas emissions. In Vietnam, the government has enacted a decree that set registration fees for EVs to zero starting in March 2022 to February 2027. For countries like Vietnam, e-mobility, or the electrification of transport, is significant given rapid motorisation and air pollution problems.

Global sales of electric cars “broke records” in 2021, doubling from the previous year to a record 6.6 million units despite the COVID-19 pandemic and its supply chain challenges, says the ‘Global Electric Vehicle Outlook 2022’ of the International Energy Agency.

Several Southeast Asian countries, too, have set targets for the use and production of EVs in the decades to come, including Thailand, Malaysia and Indonesia, although such vehicles remain a niche market in the region.  Vietnam’s private sector has its own ambitious plans for EV production.

There were more than 1,000 electric automobiles, mainly hybrid and plug-in hybrid ones, in 2021, according to the Vietnam Register.

But when it comes to electricity-powered two-wheelers, Vietnam, where motorcycles make up  the bulk of motorised vehicles, is already a major market. A total of 230,000 electric two/three-wheelers were sold in this “high-volume market” in 2021, the IEA report says.

In the proposal by the Vietnam Automobile Manufacturers Association to develop electric automobiles along with a transition roadmap from fossil fuels to electric vehicles, Vietnam would be producing one million EVs by 2028 and 3.5 million by 2040.

In March this year, it announced that it is building a plant that will make electric buses and cars, as well as auto batteries in North Carolina state in the United States, and plans to export to the US, Canada, France, Germany and the Netherlands. In September, Le Thi Thu Thuy, global chief executive officer of VinFast, was quoted as saying there are more than 65,000 reservations globally for its electric SUVs.

A 2021 report on electric mobility development for the the NDC Transport Initiative for Asia found that the EVs’ market share in Vietnam from 2025 to 2040 – from two-wheelers to passenger and commercial vehicles – shows more promise than Indonesia, Thailand, Malaysia and the Philippines.

Vietnamese cities have the “special opportunity” to go beyond just developing electric vehicles to making this part of “a broader scope of climate action, air quality control, or sustainable modal shift”, the World Resources Institute said in August.

Unlike other countries that host global original equipment manufacturers (OEMs), Vietnam is a “unique case where a local OEM, Vinfast, is present and supplying EVs across different models,” it said, which means it can reduce reliance on imports and build up a domestic supply chain.

‘Smart city’ projects are being announced across the country. In 2021, Vietnam’s government chose Ho Chi Minh City as a pioneer city for e-mobility adoption.