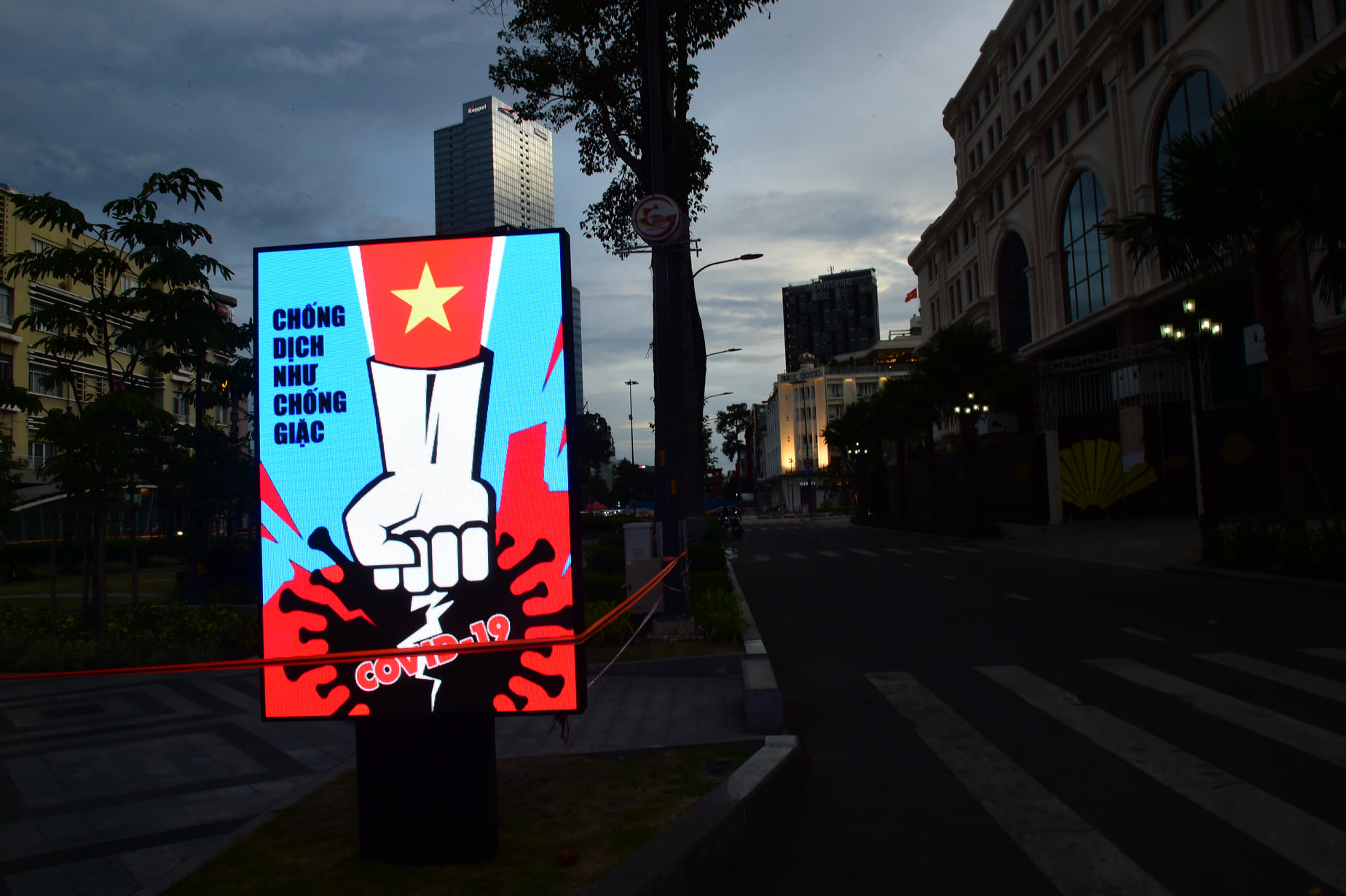 Mai Nguyen, a 27-year-old English teacher, transferred money not once, but thrice, into Vietnam’s COVID-19 vaccination fund, through which the Southeast Asian country has been collecting donations in an all-out campaign to speed up inoculation amid its most severe outbreak to date.

My Le lives halfway across the world in Rotterdam, but moved funds from her bank account in Vietnam. “Seeing that the Netherlands’ government rolled out vaccination for its people pretty soon, while Vietnam struggled to find funds and sources for the vaccine, I would like to contribute a little bit to push the speed of the jabs,” said My, who works in an investment consulting firm.

Like Mai and My, Minh Nguyen, who freelances for a gaming company, also donated to the national fund that has collected 378.70 million US dollars (8.63 trillion Vietnamese dong) from 521,583 individuals, companies and other contributors as of 20 Aug.

“Each person only needs to donate the cost of one jab,” explained the 25-year-old native of southern Ho Chi Minh City, the country’s commercial hub that has been accounting for the most number of daily COVID-19 cases. “Eventually, we can manage to have enough money for millions of vaccine doses,” he said.

Donations collected over the last three months account for 34.5% of the amount of 25.2 trillion dong (1.1 million dollars) that the fund, which started in May, aims to raise.

A big chunk of the rest of the contributions comes from the government, leaving just a little more to raise to meet the goal of the Vietnam Fund for Vaccination Prevention of Coronavirus Disease 2019. Together, individual and other contributions and state funds make up 22.63 trillion dong (993.46 million dollars) – or about 90% of the fundraising target.

The government says the country of 97 million people needs a collective effort, involving the public, since it lacks resources to get more access, quicker, to vaccines. It aims to inoculate 70 to 80% of its people by early 2022, an effort that would need 150 million doses. The 25.2 trillion dong (1.1 million dollars) cost for this, estimated by the Ministry of Finance, is reflected in the fundraising target of the vaccination fund.

Vietnam is due to receive 38 million vaccine doses through the COVAX vaccine mechanism, which means it has to source the remaining 112 million elsewhere.

More than 200 local and foreign business outfits accounted for some 90% of total donations from individuals and other groups to Vietnam’s vaccination fund.

TRYING TO CATCH UP

A country that had previously managed outbreaks better than many other nations, Vietnam is behind its Southeast Asian neighbours in vaccination. As of 18 Aug, 1.61% of its population has been fully vaccinated, and 13.15% have had at least one dose, according to the One World in Data tracker. The percentage of fully vaccinated people is 45.32% in Cambodia, 21.22% in Laos, 10.85% and 7.89% in Thailand.

Vietnam started mass vaccination on July 10, a bit later than nearby countries, at a time when the more transmissible Delta variant was igniting surges in Indonesia, Thailand, Malaysia.

Contributors to Vietnam’s vaccine fund have been a wide mix of people and groups, and include local business conglomerates as well as foreign ones like Samsung (40 billion dong or 1.75 million dollars) and Toyota (10 billion dong or 439,000 dollars).

Some groups, like the company that Minh Nguyen does some work for as well as his family’s own firm, do fundraising calls in their own circles to help get more contributors in. Others, like the teacher Mai Nguyen, says she feels lucky to still have a job in these times and wants to “help vulnerable people get vaccinated like I have.”

As it did in the first COVID-19 wave in 2020, when it flooded digital channels to urge people to take part in a war against the pandemic by heeding public health measures, Vietnam’s government has been using digital means to enlist the public’s financial support.

Mobile phone users in Vietnam received mass text messages from the government urging them to take part in the vaccination fundraising drive. “Those who have less contribute less, those who have more contribute more”, the messages said, relaying the code for transferring money via smart phones (type ‘COVID NK’, where ’N’ is the funds for donation and ‘K’ is thousands of dong).

Donations can also be made through bank transfers, or through the fund website.

In Decision No.779/QD-TTg creating the fund on 26 May, Vietnam’s Prime Minister Pham Minh Chinh said it will be used for “activities of purchasing, importing, researching and producing vaccines in the country and using COVID-19 vaccines for people.”

“It is reasonable and necessary for the government of Vietnam, a developing country with limited budget, to mobilise public donations for the purchase, import, research and production of vaccines,” said Thai-Ha Le, research director and senior faculty in public policy and management at the Ho Chi Minh City-based Fulbright University.

This is so given the context of a country that has an inadequate budget, limited access to vaccines and slow inoculation pace, as well as insufficient resources in personnel, science and health, she said. Le says that Vietnam’s achievement of its vaccination goal was challenging, even impossible, if vaccine purchases depended only on the state budget.

Not many countries have been reported to be passing the hat in Vietnam’s way to pool funds together for vaccination. Apart from the COVAX facility, the country gets vaccines through purchases and donations from Russia, China, Japan and the United States.

A review of the vaccine fund contributions shows that more than 200 local and foreign business outfits accounted for some 90% of the total donations thus far.

The banking sector in Vietnam has been a major contributor, with 21 banks giving almost 700 billion dong (30.7 million dollars) at the fund’s launch event on 5 Jun. A representative of the local VPBank said its 60-billion-dong donation (2.6 million dollars) was to help the country “quickly control the pandemic and bring life back to normal”.

It is logical for private businesses, including foreign ones, to be major contributors as they would benefit from the economy’s reopening, Le says, adding that they see themselves as having a longer-term stake in Vietnam.

While it is crucial to the vaccination effort, funding is far from the only challenge in getting inoculation to the point where it slows transmissions. Nearly 99% of Vietnam’s cumulative COVID-19 cases have been reported only since April, when the current surge set in.

Vietnam reported a record 10,657 cases on 20 Aug, reflecting trends that are a far cry from just over 100 cases a day in May and single-digit additions before that. Its case fatality rate these days, on a 7-day rolling average basis, is 4.19% (20 Aug), or more than thrice Thailand’s 1.18%. Indonesia, the worst hit in Southeast Asia in recent months, has a 4% case fatality rate.

Starting 23 Aug, residents of Ho Chi Minh City, where restrictions on public mobility are in place till mid-September, have been instructed to stay at home as part of stepped-up restrictions.

More than 2,300 medical workers have been infected with COVID-19 in Vietnam, including 900 in Ho Chi Minh City, news reports say. Over 12,000 doctors and nurses from other regions have come south, and 7,000 of these went to Ho Chi Minh City.

The city has mobilised all the resources of the private and public medical community, and recruited retired doctors as well as medical students, confirms a local doctor who handles COVID-19 cases.

“But the healthcare system is still under pressure. There are cases that one family member got COVID-19, leading to the whole family catching the virus,” she said. “It (vaccine supply) must be quick.”