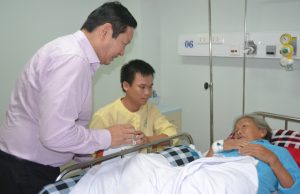 HO CHI MINH CITY, Vietnam, May 12 (Reporting ASEAN) —  After attending the inauguration of the FPT Complex in central Da Nang city last April, Truong Gia Binh, the FPT company founder and chairman, visited the Da Nang Cancer Hospital and presented patients with gifts and medicines worth around 20,000 US dollars.

The biggest cancer facility in Vietnam’s central region, the first non-profit hospital in this Southeast Asian country, was not just any hospital for Binh. The Vietnamese multinational firm FPT (or Corporation for Financing and Promoting Technology) is among the biggest listed companies in the country. It financed the medical facility’s information technology system to the tune of 10 million dollars in 2014 and then another fund infusion of 2 million dollars.

These efforts show how FPT is in a class of its own when it comes to Corporate Social Responsibility (CSR), which remains a new concept in Vietnam’s business community since its introduction about a decade ago and is implemented more by bigger companies than by smaller enterprises.

FPT has been practicing CSR since it integrated such initiatives into its development strategy in 2010. The 5.9-hectare FPT Complex, the largest such IT service centre in central Vietnam, has been recognised for Excellence in Design for Greater Efficiencies by Vietnam’s Construction Ministry and the World Bank for achieving a 20-percent savings in the company’s energy, water and use of materials.

FPT, whose core businesses are technology, telecommunications, technology product distribution and retail, as well as education, has some 27,000 staff in 19 countries and territories. In 2015, it generated revenue amounting to 126 million dollars.

The company is now at a stage where it is creating shared value (CSV), a concept coined by Harvard University’s Michael E Porter and Mark R Krame that is premised on the belief that a company’s success and the well-being of the community where it operates are mutually dependent, says Truong Thi Thanh Thanh, Binh’s elder sister and FPT’s social responsibility director.

For big companies like FPT, the pursuit of CSR includes “investing in education and the young generation means investing in the company’s future”, she says.

For instance, the company founded the FPT Young Talent Centre and Trí Tuệ Việt Nam, a contest that seeks out young and innovative talents in the technology field as well as develops human resources for the company. In 2006, the firm founded FPT University to focus on vocational training. Thanh says 98 percent of its students, totalling 17,900 at present, get employed six months after graduation.

Not yet a norm

But CSR is far from a generally accepted or practiced norm in Vietnam. More than 93 percent of the country’s over 500,000 businesses are small and medium-sized enterprises that have fewer than 30 staff and registered capital of 480,000 dollars.

“CSR has not become a norm yet, and only exists in big corporations with international strategy and clients,” says Dau Anh Tuan, director of the legal department at the Vietnam Chamber of Commerce and Industry (VCCI).

Among these bigger corporations are Thành Thành Công (TTC), a family-owned and diversified corporation with more than 10,000 staff and 21 affiliate companies. With one of its four core businesses in the sugarcane industry, the company spent 4.4 million dollars in CSR activities in 2015. This amount included 400,000 dollars for charitable activities, and 4 million dollar package to help more than 10,000 sugarcane farmers achieve higher- and better-quality yields, according to TTC’s communications department.

Like FPT, TTC sees CSR as socially responsible investment, where it makes business socially inclusive by providing underprivileged members of the community with means, tools and knowhow, and then including them in the supply chain.

But “for the majority of privately owned SMEs in Vietnam, their priority is surviving and sustaining their business. Thus, CSR is not included in their operations,” Tuan of VCCI says.

The concept of CSR was introduced in Vietnam as a charity-based engagement. While there is yet no data indicating the total amount of charitable activities across enterprises, these are believed to be increasing.

In a 2014 study, ‘Corporate Philanthropy and Corporate Perceptions of Local NGOs in Vietnam’, authors Dang Hoang Giang and Pham Minh Tri concluded that corporate philanthropy is generally considered to be a type of CSR activity in the country. Among more than 500 companies covered by the study, around three-quarters had been engaged in some form of giving over the last 12 months, with cash donations totalling 4.5 million dollars, in-kind contributions valued at 560,000 dollars and employees devoting 19,500 hours to volunteer activities.

Sponsored by The Asia Foundation together with the Centre for Community Support Development Studies and VCCI, the study also found business size to be a key driving factor for philanthropy. The biggest businesses were the biggest givers, it showed. Some 96 percent of companies with more than 500 employees were engaged in charitable giving, as against only 46 percent of businesses with 10 staff or less.

The findings are cause for optimism, says Filip Graovac, Vietnam deputy country representative of The Asia Foundation. He believes the business community will convert to CSR in the future, but concedes that the proper understanding of CSR among businesses, particularly SMEs, remains limited at present.

“They still have a tendency to see CSR in terms of philanthropy or charity, doing some giving while still continuing harmful practices in terms of either the environment or society, or both,” he says.

Time to go beyond the basics

Dana Doan, founder and strategic advisor of the Ho Chi Minh City-based LIN Centre for Community Development, defines CSR as being about doing no harm to people and the planet while making a profit. LIN is an NGO that supports local non-profits that improve access to opportunities for disadvantaged people and enhance the quality of life in this southern city. It has been providing advice, developing and disseminating resources and promoting the sharing of experiences among corporate and institutional donors.

She believes that CSR needs to move beyond the basics and that companies must focus more on creating shared value.

Doan says that this is bound to happen sooner than later, given mounting consumer pressure in Vietnam, as indicated in studies by leading consumer market research companies such as Cimigo and Nielsen, and increasing demands by the millennial generation to make a positive contribution to society.

“Most Vietnamese companies today are wavering between altruistic CSR and strategic CSR. Only a small number are thinking about sustainability,” she adds.

The Vietnam Office for Business Sustainable Development (VBCSD), an organisation under the VCCI umbrella, has conducted CSR training and workshops for what it says are “thousands of enterprises in Vietnam”. After giving out the CSR Award five times since 2005, VBCSD is conducting a programme that ranks sustainable businesses this year, which it hopes will promote CSR in the country.

Nguyen Quang Vinh, general secretary of VBCSD, says CSR in Vietnam used to be ‘nice to have’ in a checklist. “Today, CSR has become a ‘must-have’,” he explains. Although big companies have good understanding and implementation of CSR, many SMEs still equate CSR with charity or see it as a tool for burnishing the corporate brand. Others think CSR is solely for big companies.

“It should be understood that CSR implementation does not depend on business scale, but on an understanding of the business,” he says. “SMEs can still practice CSR within (the limits of) their resources.”

Still, there is yet no strong legal or policy measure to encourage or push businesses to implement a comprehensive CSR policy in the country.

Looking to the future, Graovac of The Asia Foundation says that regulatory changes -– mostly related to labour and environment and likely to impact CSR practices among businesses – will take place as part of the Trans-Pacific Partnership (TPP). The TPP is a trade agreement among 12 Asia-Pacific countries, including four member countries of the Association of Southeast Asian Nations (ASEAN), namely Brunei, Malaysia, Singapore and Vietnam.

But ASEAN integration will also put increased importance on the private sector, especially in its role in achieving sustainable growth, he says, so CSR has a natural role to play in this as well.

“The integration into regional and international economies will have a positive influence on both the government and businesses in promoting policies to facilitate and encourage compliance, and more than just simple compliance, with required standards and principles that will in return ‘force’ companies to seriously think about the issues at hand and promote a need to have the right CSR policy in place,” Graovac explains.

Doan of LIN wants to see companies go a step further: “We need to talk more about CSV and less about CSR. When we talk about CSV, it is easier to get companies to understand that we need to partner together to achieve positive community development.” (END/Reporting ASEAN – Edited by T Bacalla and J Son)

*This story is part of the feature series on ‘CSR in the ASEAN Community’ for the Reporting ASEAN: 2015 and Beyond programme.