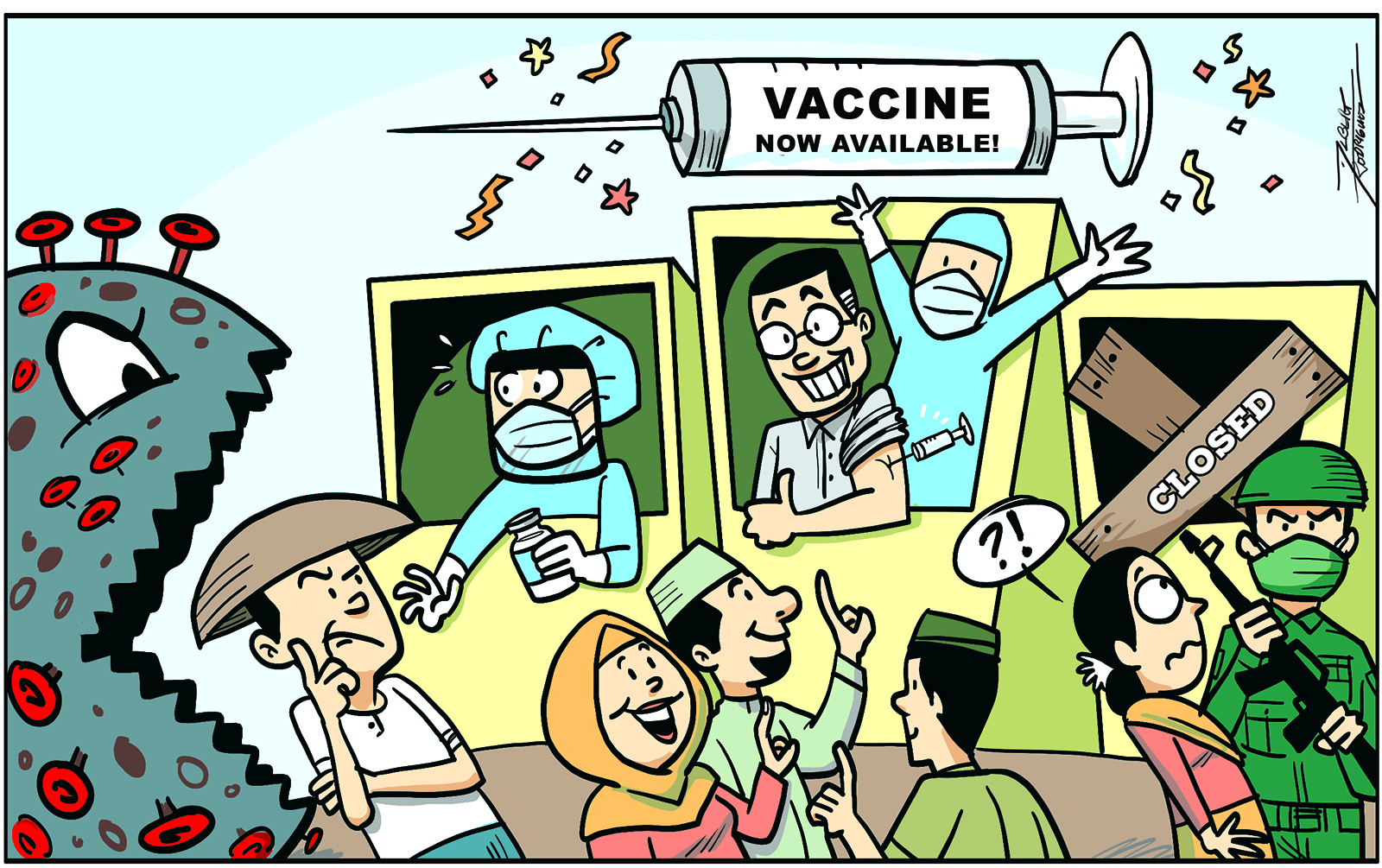 “So which wave of COVID-19 are you in?” is a question Southeast Asians ask of one another these days. A year after the lockdowns that their countries went into, many of them are, well, back in them again, even as vaccinations are underway in all countries in the region.

Cambodia and Timor Leste reported their first pandemic deaths in March and April. Thailand and the Philippines are seeing their highest-ever daily cases since the pandemic started. The ongoing outbreaks have driven home the point that it is no clear exit corridor from the pandemic.

Just as Southeast Asia tries to catch up in the vaccination race – the last country, Timor Leste, started on Apr 7 – it faces a confluence of issues like various fronts in a battle: the efficiency of the vaccination process, more infectious variants that put a strain on health systems, as well as fatigue of COVID-19 restrictions and in some cases, of their governments’ performance too.

“It appears to me COVID-19 will not disappear any time soon, not even next year,” said Ratna Fitriani, who runs an online business in Indonesia. “My guess is the pandemic will still be around for the next five years.”

“We are just praying to see any progress at this point,” Filipino consultancy manager Fredrick Rara said of his country’s second outbreak. The nation of 109 million people reported over 15,298 cases on Apr 2 and is now 13th globally in case numbers over the last 7 days.

Only 5% of 3,000 adult respondents from six Southeast Asian countries say they are now in stage 6 of the “COVID-19 sentiment phase” – “I feel the pandemic is behind me and I am moving on with my life” – used by the market research firm Ipsos in its February 2021 survey. The online survey, whose results were released in April, was done in Indonesia, Malaysia, Philippines, Singapore, Thailand and Vietnam.

This percentage, during what Ipsos calls Southeast Asia’s third wave, has not changed since the second wave in September 2020. But 40% of Southeast Asians, the highest since May 2020, say they have now adapted to restrictions and new routines.

People who see their countries doing better in pandemic management and/or vaccination, such as Singapore and Vietnam, appear to be happier with their governments and more positive about the future, a review of several global dashboards shows.

Vietnam has the highest percentage, at 91%, of people who find its government to be handling the pandemic well, among five Asean countries tracked by the YouGov public opinion company as of mid-March. The figure is 88% in Singapore, 72% in Malaysia, 69% in Indonesia and the lowest at 58% in the Philippines.

Countries are using various vaccine brands, proceeding at different paces toward herd-immunity calculations of from 60% and above.

While Southeast Asians’ vaccine willingness generally remains high, they have varied views. Some are extreme doubters, some say the benefits outweigh the risks, others want to choose the jab they get, and still others are rushing to get vaccinated.

Among seven Southeast Asian countries tracked by YouGov, the share of population willing to get a vaccine ranged from 50% (the Philippines) to 85% (Vietnam). These views have not changed much since December. But Thais’ level of willingness has been edging down from over 80% in January to 60%, the lowest so far, as of Mar 14, though its pandemic management and low death numbers earned praises over the past year.

“I have some sort of anxiety too (about safety). But whatever, I will get vaccinated when my turn arrives. At least, I think, it can partly protect me,” said Mao Makara, a security guard in Phnom Penh. “As an Indonesian saying goes, ‘get ready with an umbrella before the rain comes’, said Yustinus Budiwanto, a 52-year-old resident of Bandung, Indonesia. “I want my immunity strong enough to fight the virus if I contract it.”

While some vaccines have lower efficacy, “getting vaccinated with at least 50% is way better than not having any at all”, explained Filipino nurse Sandra Jose, who prefers the Pfizer or Moderna vaccines. A vaccine with 50% efficacy is a minimum, which should give at least a 50% reduction in COVID-19 risk.

Only 5% of respondents from Southeast Asian countries say they “feel the pandemic is behind me and I am moving on with my life”, in a February 2021 survey by the market research firm Ipsos.

Just as there are various brands of the same drug, vaccines have properties that make them a better fit for various groups. “One of the biggest challenges for healthcare workers. . . is fear and lack of vaccine confidence,” conceded Jose, who works at Saint Luke’s Medical Center. “Remember that the best vaccine is the one available right now.”

“We tend to have negative mindset toward Chinese products. It can be a small factor that makes me more reluctant,” said Seng Simouy, who works with a non-government group in Phnom Penh. But she will get vaccinated as “I believe that scientists don’t want to kill people.”

Thus far, governments have been using tools such as YouTube clips, celebrity endorsements and hashtags like #iGotShot in Singapore to push vaccine confidence.

The region has been following reports about undesirable, though rare, effects such as blood clotting from two vaccine brands, Astra Zeneca and Johnson and Johnson.

How do Southeast Asians see vaccination coming along? An average of 62% of respondents in six Asean countries believe that over half of their populations will have been vaccinated this year, the Ipsos survey results show.

Singapore has the most respondents (68%) who say they believe 50% of the population will get vaccinated in 2021. But just half of Filipinos, who had poor satisfaction ratings of its government and lowest vaccine willingness in the YouGov tracker, think the same. This was the lowest percentage among the six countries in the Ipsos set.

The highest percentages of those saying their countries would “never” reach 50% vaccination are in Thailand (21%), and the Philippines (14%). (But 60% percent of Thai respondents think majority would get vaccinated in 2021.)

Meantime, Cambodia’s and Thailand’s third outbreaks, both driven by the UK variant B117, have led to the cancelling of traditional new year celebrations in mid-April.

The goal in Cambodia, whose first COVID-19 death was on Mar 11, is to avert an uncontrolled outbreak. “Unless we can stop the outbreak, Cambodia’s health system is at high risk of being overwhelmed, which would have disastrous consequences,” WHO Representative to Cambodia Li Ailan said. Prime Minister Hun Sen has made vaccination mandatory for civil servants, and a lockdown started in Phnom Penh on Apr 15.

Thailand’s daily COVID-19 cases exceeded 1,700 on Apr 18. The government has barred gatherings beyond 50 people and shuttered schools in ‘red-zone’ areas for two weeks.

In Malaysia, officials warned of a fourth outbreak amid concern about bazaars during Ramadan, which started in mid-April. Indonesian Muslims have fewer restrictions during Ramadan – the country’s new daily cases have been falling sharply from nearly 15,000 in January to just over 5,000 on Apr 17.

Since the Feb 1 coup, Myanmar’s reported COVID-19 figures are a question mark given many hospitals’ shutdown in the civil disobedience strike.

The Our World in Data dashboard, which uses official data, showed fully vaccinated people in Myanmar at 0.07% of its 54.4 million people as of Mar 31. From Feb 3 to Apr 12, its daily reported cases fell from 573 to 2. On Apr 1, the military-controlled ‘Global New Light of Myanmar’ saidmore than 1 million people had received a first vaccine dose and 40,000, also the second.

FAR FROM SHORT, OR SIMPLE

Herd immunity is not a one-time goal, as it has to hold over the longer term assuming that vaccines are reducing transmission and illness severity. While they are not aimed at totally eradicating COVID-19, vaccines are meant to cut out-of-control transmission. Vaccination does not mean public restrictions can be eased quickly too.

Many are resigned to the fact that COVID-19 is a longer-term situation rather than a passing storm, even as WHO says the pandemic is now “growing exponentially” across the globe.

“I do not see a future out of COVID in the Philippines,” teacher Aaron Philip dela Cruz said. “Perhaps in five years there will be better control of the virus. But I believe everything will be in shambles by then, particularly the economy and the state of the poor.”

Said Yustinus: “I have no idea when the pandemic will disappear, but I think we have to learn with it.”

*This is part of Reporting ASEAN’s ‘Lens Southeast Asia’ series, which is in collaboration with the Foreign Press Center Japan-Sasakawa Peace Foundation.