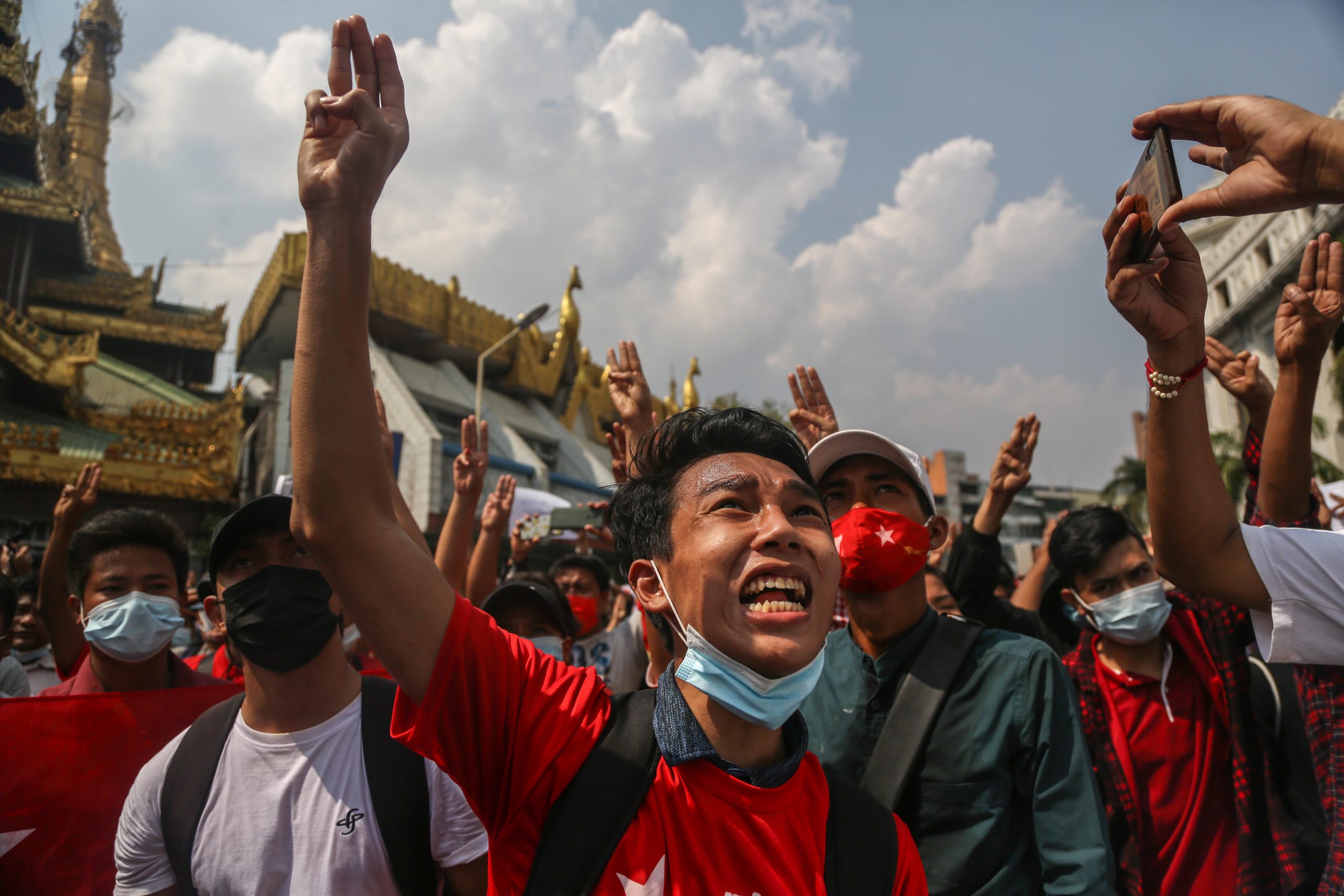 Asean hasn’t been gaining fans from its handling of the Myanmar military’s coup. But if it is able to craft a new template, the grouping may still count as the best pragmatic bet for getting a conversation going with that country’s men in uniform in order to, first, stop the brutal crackdown on its people.

If the junta were an armed group of hostage takers – some might find that an apt description – Asean is being looked to as a negotiator to open communication lines to the hostage takers.

This may be an unpleasant role, but a necessary one in the wake of the Feb 1 military coup.

By now, just about every country, from China and Japan to the United States to the European Union, as well as the United Nations, has said they are looking to work with Asean as an actor in the Myanmar equation. As of Mar 10, more than 60 people have been killed in the military junta’s crackdown on ongoing protests and 2,008 arrested, says the Assistance Association for Political Prisoners Burma group.

The question ‘what can Asean do?’ can be broken down into these: What might it tap into from its ‘constructive engagement’ with Myanmar decades ago, or its having been a non-threatening bridge to the outside world after the Nargis disaster in 2008? Is there a lesson from how Asean has been able to send humanitarian aid to Rakhine?

These have been Asean’s way of working, often under the radar. It has had a relationship with Myanmar from the time the military running the country. Over the last decade too, Southeast Asian – and East Asian – countries have built economic links with Myanmar, so that Singapore is its biggest source of foreign investments and Japan, its biggest aid donor.

How are these engagements relevant today? The crisis challenges Asean to turn its not-so-nimble nature into a tool for negotiation, even realpolitik, without wasting time.

While Asean “emphasises the importance of listening”, it needs to be clear to Myanmar’s military about its expectations and stress that communication does not confer legitimacy of any sort, Indonesia’s former foreign minister Marty Natalegawa told Al Jazeera, using the word “junta”. Unlike before, Myanmar today is an insider to Asean – a connection that Western governments do not have.

Indonesian Foreign Minister Retno Marsudi says the country is in touch with the military and the elected legislators in the Committee Representing Pyidaungsu Hluttaw. Indonesia and Singapore have spoken out against the violent crackdowns and killings of peaceful protesters, and called for releasing Myanmar’s elected leaders.

At the UN General Assembly’s informal meeting in February, other Asean countries expressed concern that varied in specifics, nuance and some language.

Among East Asian countries, Japan’s ambassador to Myanmar Ichiro Maruyama met the military’s foreign minister, U Wanna Maung Lwin, on Mar 8 and conveyed Tokyo’s call for a stop to the violence against civilians and the release of all detainees.

“China is … willing to contact and communicate with all parties on the basis of respecting Myanmar’s sovereignty and the will of the people, so as to play a constructive role in easing tensions,” Foreign Minister Wang Yi said on Mar 7. China’s image problem – many in Myanmar believe that China was behind the coup – has made it harder for it to be heard.

Could Asean, asserting its centrality, use its being ‘friend to all, enemy of none’ to craft a coalition that mixes the western approach of targetted sanctions with its style of dialogue?

“The present crisis cannot be overcome by each side put into a rather extreme situation, making it a zero-sum game. At the end of the day, negotiation is the only way out,” Soe Myint Aung of the Yangon Centre for Independent Research told a discussion by Singapore’s ‘Straits Times’. “Many people in Myanmar see this as a struggle between good and evil, but we should still keep some grey areas open.”

“It’s difficult, it’s challenging but every step towards getting a breakthrough starts with mediation,” agreed Moe Thuzar of the Institute of Southeast Asian Studies in Singapore. “We have a divided society, where polarisations can either cause those divisions to go deeper or, through mediation and bringing people to the table, you can maybe try to minimise the strong feelings of radicalisation.”

Moe Thuzar suggested “creative” options such as ASEAN advising the UN in a “consultative mechanism” of countries, or using a ’friends of the ASEAN secretary-general’ tack. Soe Myint Aung says Asean could name a special envoy for Myanmar not just to talk to the military, but create space to host a dialogue with elected civilian leaders. Bring in countries that are past and future Asean chairs, Moe Thuzar adds, as this will be a long-term project of building structures and habits toward civilian rule. “It’s not an instant gratification moment.”

Could Asean change with the times, update its worldview with its constituents’ expectations about ‘doing the right thing’ and use this to build consensus?

The Myanmar crisis has put the spotlight on how diplomacy must show results on the ground, going far beyond negotiating the wording of statements.

The art of diplomacy can allow parties to talk without formally recognising each other. Meetings can be non-meetings and non-papers circulated to allow discussion of sensitive topics. Asean ways allow ideas to be tested in non-official tracks such as think tanks. Diplomacy can unfold away from the public glare.

Natalegawa said he hopes there is “already a script” for Asean’s handling of the crisis. But Singapore’s Prime Minister Lee Hsien Loong has said that ASEAN and outsiders had “zero influence” on Myanmar in the past.

Watched online by many in between nightly internet shutdowns, the Myanmar uprising shows that the region is quite different from even a decade ago. Where diplomacy plays out in more quiet ways, today’s environment and digital habits pose a challenge in that very little is considered said or done until it is posted online or said in public spaces.

The Myanmar public, in fact, has already become part of Asean’s direct constituency, whose views it needs to factor in, not least in explaining why a conversation needs to be held with coupmakers who are without legitimacy. Regional is local, and local is regional.

This was evident in the backlash Indonesia got after a Reuters report said that Retno was to ask the military to keep to its initial promise to hold a new election within a year. Asean governments got a clear message about what is unacceptable at a time when young people know they are in a connected global community.

As protesters see friends and kin beaten, arrested or killed, it becomes harder to explain to them that in Asean terms, its two statements have gone further than before by telling Myanmar, in diplomatese, to adhere to its legal commitment under the Aseancharter to the rule of law, constitutional government and fundamental freedoms.

Could Asean change with the times, update its worldview with its constituents’ expectations about ‘doing the right thing’ and use this to build consensus? Citizens in the region’s less than democratic settings find the brutality in Myanmar appalling too. This is a very low bar when reputational damage is real, and rising, with any sign of acceptance of the junta.

These days, placards in Myanmar seek ‘R2P’ or the ‘right to protect’ action under a UN intervention tool meant to prevent mass murders such as those in Rwanda and the former Yugoslavia. But many have said this points to false hopes and disappointment.

In Southeast Asia and elsewhere, the disapproval of deplorable behaviour in their midst, can, and has, lasted for many years.

Indonesia dealt with nearly three decades of criticism of its occupation of East Timor, which became independent in 2002 after it – not outsiders – decided to hold a referendum. The Khmer Rouge killed more than 1.5 million Cambodians from 1975 to 1979. Their hostility toward Vietnam after it invaded Cambodia and overthrew the Khmer Rouge led Asean, the United States and China to back the genocidal group’s occupancy of Cambodia’s UN seat until the eighties.

These are from the past, but provide a reality check that legal or moral legitimacy do not always shape international relations or realities.

Diplomats like to call Asean a family whose members sit at the same table despite disagreements. Indeed so, but as in real life, family ties can be the most toxic relationships of all.