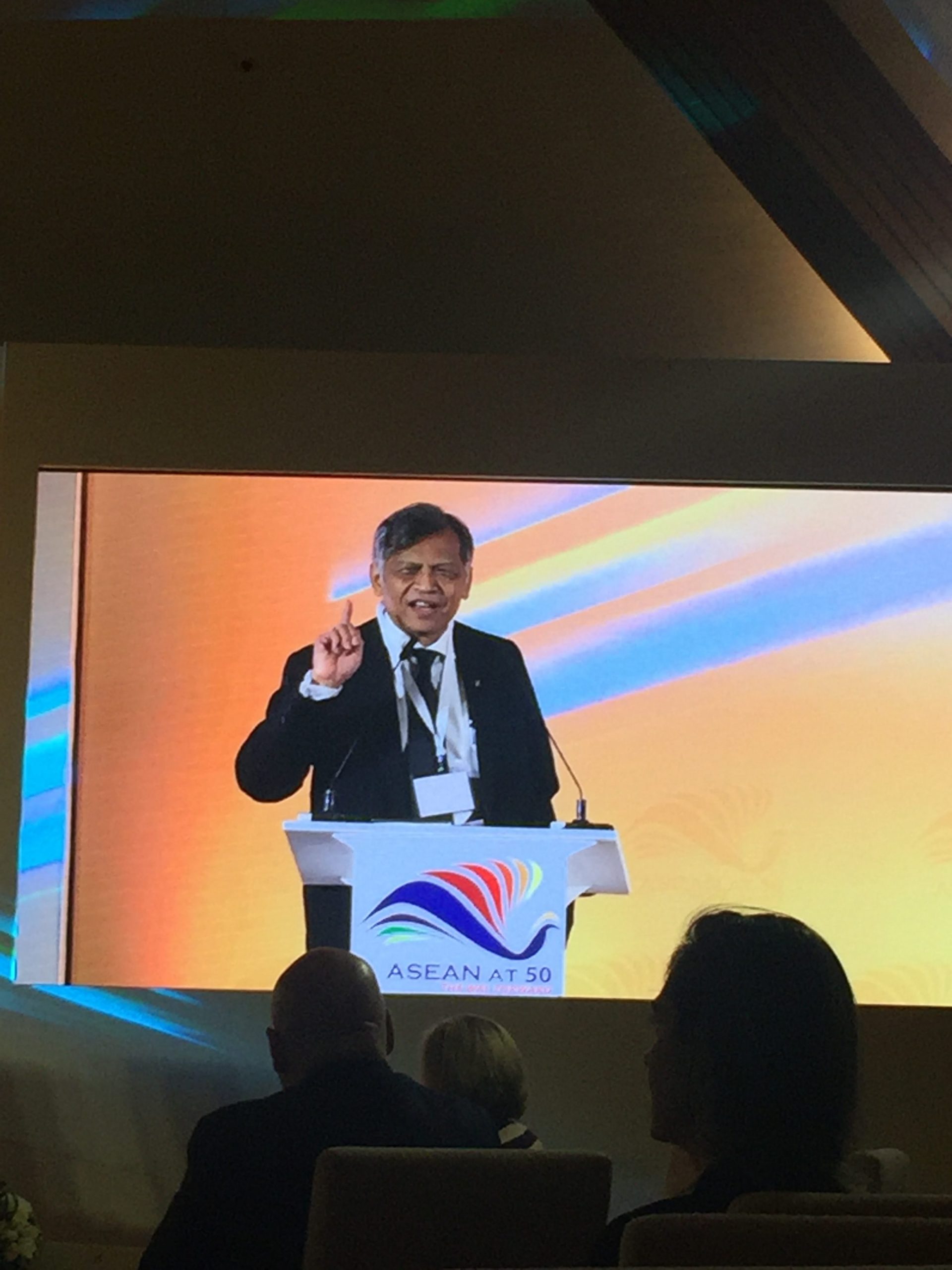 Unsettled by the uncertain security environment around it, ASEAN should free itself from the old confines of navigating between the big powers and build its muscle as a middle power – one that confidently and collectively holds its own against undue external pressures.

This prescription for ASEAN in the years ahead was put forth by several foreign policy experts, including former foreign and other ministers from inside and outside ASEAN, at the conference ‘ASEAN at 50: The Way Forward’, which ended in Manila on Aug. 4.

They said it was time for ASEAN to break away from being forced to choose between different powers or using them as points of reference, and to set the terms of a regional architecture bound by deeper integration in political and security, as well as economic and trade, terms.

“If ASEAN could better harness its collective middle-power energy and capacity it could be a more influential and effective regional security player than it now is, in particular in pushing back in the South China Sea against China’s increasingly assertive encroachment: the united front of middle powers might be more effective in resisting this than relying on the United States to do the job for us,” former Australian foreign minister Gareth Evans said.

“ASEAN should stress that it is nobody’s backyard or exclusive preserve. Failure to do so would severely narrow ASEAN’s options and make it over-dependent on a single player,” former Philippine foreign secretary Albert del Rosario said.

“Our region needs to define its own leadership. To do otherwise is to cede the initiative to an outside power,” Del Rosario told the conference, organized by the Carlos P Romulo Foundation with the ASEAN Institutes for Strategic and International Studies and the Stratbase ADR Institute. Calling on ASEAN to keep a “principled neutrality”, he proposed that its three most populous states – Indonesia, the Philippines and Vietnam – to consider offering this leadership in shaping ASEAN as a middle power.

ASEAN and Australia should cooperate as middle powers to provide more stability at a time when globalization, economic openness and multilateralism are on the retreat, Evans said. He suggested that Australia become an associate member of ASEAN one day.

Among the mechanisms suggested for ASEAN to show leadership in and remain the anchor of regional stability are the East Asia Summit, ASEAN Regional Forum and ASEAN Defence Ministers’ Meeting-Plus.

He said: “It would be very much in ASEAN’s interest to think of itself more self-consciously as a grouping largely comprised of such powers, who are capable collectively of punching well above their individual weight.”

There are concerns that ASEAN centrality is being undercut and member states divided out of a fear of displeasing China, which is the association’s second largest trading partner after trade within ASEAN itself. Of China’s economic clout, Del Rosario said: “I am concerned that this fact that translated into fear – a fear that stops us from standing up on important issues in case of economic retaliation.”

“A multipolar world now requires ASEAN to tread carefully to maintain its centrality and preserve its unity,” former foreign secretary Roberto Romulo said. “How can ASEAN successfully navigate between competing powers while maintaining its centrality and cohesiveness? Is there scope for collective engagement with like-minded middle powers?”

“We have to be more than just a fulcrum (of regional cooperation). ASEAN has to show its maturity,” said former ASEAN secretary-general and former Thai foreign secretary Surin Pitsuwan.

But to be an effective, credible middle power, ASEAN needs to change old habits that have made it averse to openly discussing difficult or divisive issues, and to pushing itself to hammer out a collective position or solution on these.

Most speakers called ASEAN to state – and stick to – its commitment to a rules-based order, one that even big powers ought to follow.

“ASEAN could perhaps evolve into a more centralized, supranatural entity, capable of formulating and executing foreign policy,” Michael Armacost, former US undersecretary of state, said in video remarks. Collective and effective action is needed “if we are to forestall further efforts by Beijing to turn the South China Sea into a Chinese lake”.

Not a few called for a review of ASEAN’s decision-making by consensus.

“It has often been said that the greatest leveller and best guarantor of peace is the law. Is ASEAN ready to take this next step?” Romulo asked.

ASEAN also needs to take seriously its own economic initiatives designed to ensure an open economy conducive to growth, regardless of a hostile trade environment externally, by speeding up the completion of the Regional Comprehensive Economic Partnership (RCEP) this year, experts pointed out. (END)

(This article first appeared in The Philippine Star spread featuring news and views from the ‘ASEAN at 50: The Way Forward’ conference, held in Makati City, on 3-4 Aug 2017.)