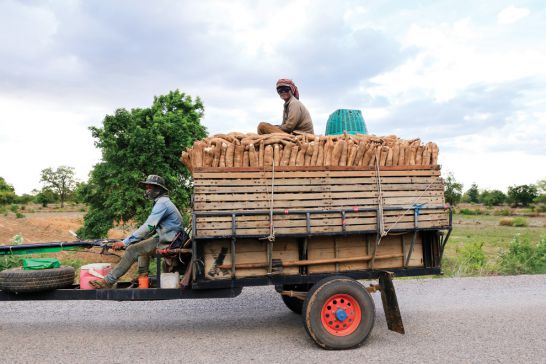 Home » Features » CAMBODIA: The Root of the Problem

PHNOM PENH, Feb 23 (Reporting ASEAN) – Cambodian trader Sam Yin used to sell his dried cassava chips to China, but after a supply glut there sent prices plummeting, he turned his attention to the Thai market. Yet there, too, receding Chinese demand has sent ripples through the market.

Yin, the president of Malai Trading Company in Banteay Meanchey province, said the wholesale market price on cassava chips has shrivelled from 5.8 baht (0.162 cents) per kilo in 2015, to just 5.2 baht (0.15 cents) per kilo now, which has made margins razor thin.

And while traders and factories in Thailand are still ready to buy his cassava, Thai authorities appear to be imposing trade barriers aimed at protecting their country’s half a million cassava-growing households.

Cassava is an important cash crop for Thailand, and as domestic demand is low, the country has turned to become the world’s leading exporter of cassava products.

In Cambodia, where cassava is the second most important agricultural crop after rice, production of the starchy root is also geared for foreign markets, mainly Thailand, China and Vietnam. Lacking processing facilities of their own, Cambodian farmers must sell the dried cassava chips and flour to these markets, where it is processed into food, textiles and paper products.

Cambodia exported 106 million tonnes of cassava during the first 10 months of 2015 with an estimated value of $20 million, according to Ministry of Commerce data.

Yet Thai traders have long relied on Cambodian farmers to produce at least a portion of their export crop. Thai authorities have traditionally used tariffs as a valve to regulate the flow of labour-intensive cassava flour from Cambodia and maintain higher prices for their own farmers.

The ASEAN economic community (AEC), launched late last year, stands to change this dynamic. The new grouping envisions a fully integrated economic bloc of 10 ASEAN member states, with a free flow of capital, goods and labour. Member governments have pledged to abolish tariffs on most products traded within the region, including cassava.

But according to Yin, Thai authorities have replaced tariffs with a raft of non-tariff barriers aimed at stemming the flow of Cambodian-grown cassava across the border by notching up its shipping costs to discourage trade. In recent months, Thai border officials have shown a conspicuous zeal in enforcing weight restrictions on cassava-laden trucks. 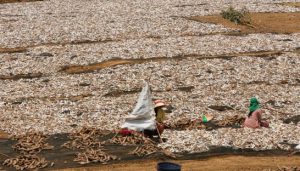 “We usually never had any problems with the weight of our container trucks, but now they’ve started scrutinising it,” he said.

By regulation, trucks in excess of 50 tonnes, including the weight of the vehicle, are barred from entering the country.

“If they find a surplus, they fine us and force us to offload the surplus cargo,” said Yin. “This takes a lot of time and means we have to bring another truck to handle the shipment.”

Yin’s firm now packs its trucks lighter, but Thai border officials have honed in on another obscure regulation, measuring the quality and moisture content of the cassava cargo.

“It’s just a technical excuse to slow the export process because they don’t want our cassava,” he asserted. “They want Thai-grown cassava to retain its price, so have raised these technical barriers to ensure it sells out first [before buying Cambodian product].”

Sok Sa Thim, a provincial commerce department official for Pailin province, said his department is trying to work with Thai authorities to remove these non-tariff barriers.

“Often when our traders ship across the border, Thai officials find minor technical issues, such as claiming our trucks exceed weight limitations … or citing improper packaging standards,” he said. “We are trying to solve these issues gradually through negotiations with our Thai provincial counterparts.”

Thailand’s border control antics may have even caught the attention of Prime Minister Hun Sen, who last month complained about the unfair trade practices of certain unnamed countries.

“They are open for imports, but there are barriers,” he said. “While they can export to us freely without barriers, whenever we export to them there is either this or that barrier, which puts pressure on our farmers by making it unprofitable.”

Moul Sam, an accountant for Pailin-based cassava export firm Chamroeun Chey Company, said local cassava prices have continued to drop on external pressure, and many farmers are now stockpiling their dried cassava in the hope that prices rebound.

“We’re entirely dependent on the foreign market price,” he said. “The price is based on China’s market and demand. Thai demand from us is less because they have their own cassava, which is enough to satisfy their market.”

Mey Kalyan, senior adviser to the Supreme National Economic Council, said non-tariff barriers can be expected as Thailand looks first to secure buyers in China for its own locally produced cassava. He said Cambodia would be better served by working to secure more direct export channels to China.

“Relying on Thailand’s market is not suitable for us because they are a cassava exporter too,” he said. “We are competitors, so why don’t we export directly?”

Kalyan said high-level talks between Cambodia and China have removed the legal barriers of direct trade, but the Kingdom’s poorly developed logistics network remains a challenge. Until Sihanoukville, Cambodia’s main seaport, is able to handle the bulk orders preferred by Chinese ships, local producers will continue to rely on Thai middlemen to deliver their shipments. (END/Reporting ASEAN)