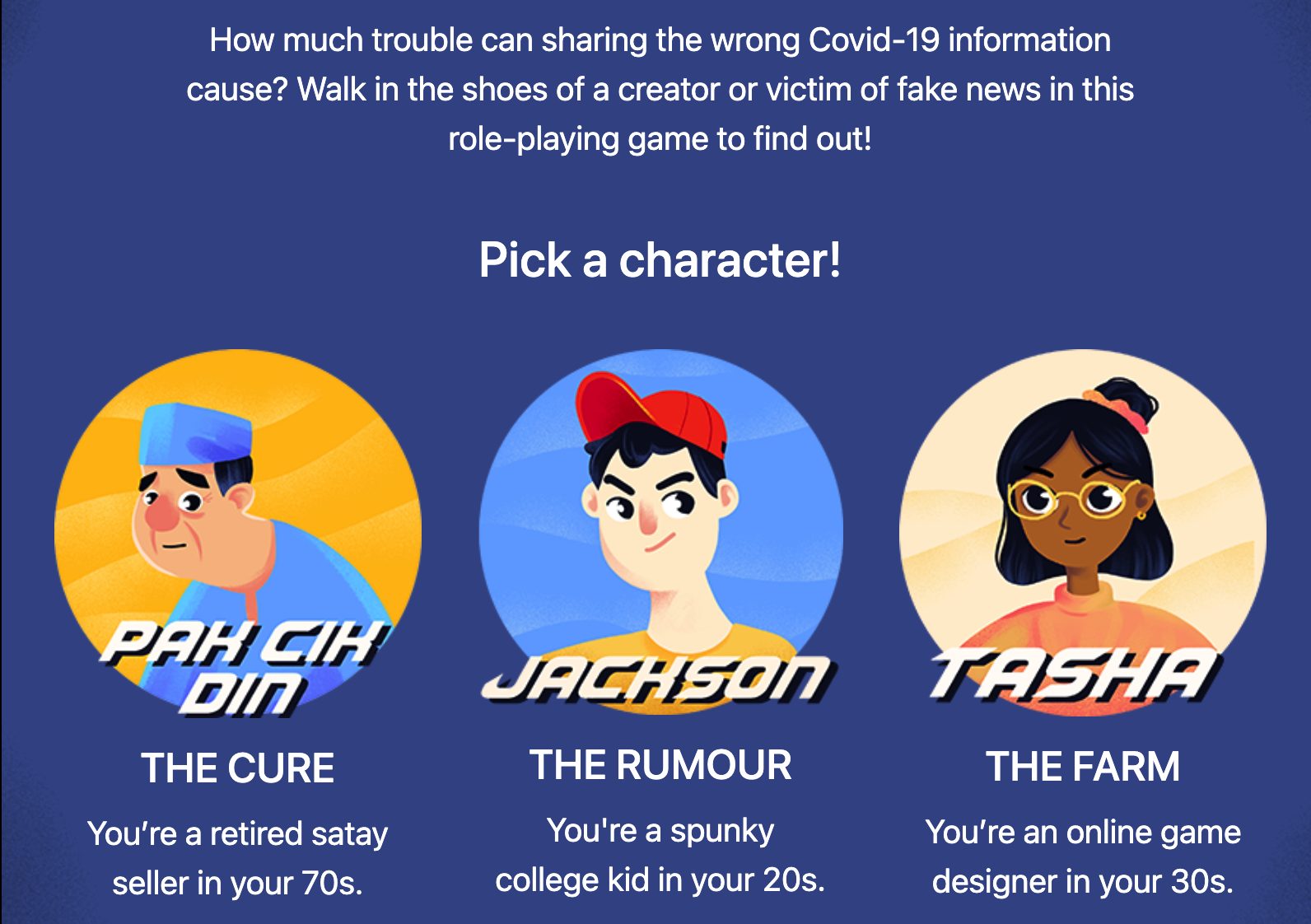 Home » #mediaonmedia » The Name of the (Misinformation) Game? Our Choices

First, you choose the character you want to be: A college kid in his 20s? An online game designer? Hmm, how about a 70-something satay seller?

Once you take on one of these identities, you come across situations, some trickier than others, that involve decisions to make about online information you receive. Do you pass it on, or not? Is it really in the public good to pass on information you’re unsure of, “just in case”? What if you were offered a job that involved creating false content and making it viral? What should you do when you or a family member shows some symptoms that you worry might be COVID-19?

These are some of the “real events” used in the online game ‘Choices I Make’, which was developed by the Malaysia Information Literacy Education (MILE) with the goal of using a fun tool to convey a serious message and have individuals take a pause about their online behaviour.

“We hoped a fun, quick and engaging game that was easily accessible could capture players’ attention and increase content virality, which in turn, would help increase audience exposure to the game and the lessons within,” said Darshini Kandasamy, a Malaysian journalist and editor who co-founded MILE.

The game project gave the group useful lessons, including the fact that many people know the term “fake news” but are much less clear on how to detect this. Good intentions, too, are far from enough to stop the spread of misinformation and disinformation. In this chat with Reporting ASEAN, Darshini makes a pitch for empowering individuals with skills in critical thinking, news and information literacy and even understanding their own biases, so that they do not easily fall into the misinformation trap.

Johanna: What lessons did you and MILE learned from making this game? What did it let you know about people’s behaviour?

Darshini: Creating this game was an interesting process. Aside from learning the technical aspects of putting a game such as this together, the game itself helped to highlight people’s attitude or base assumptions when it came to disinformation, the motivations/causes behind them, how it spreads, as well as possible consequences (including running afoul of the law).

Players also preferred inspirational and happier endings and made choices which they felt would lead in that direction. The reality, of course, is that there are rarely “happy endings” when it comes to the dissemination of disinformation, however unintentional, and this was one of the message/awareness we wanted to relay with the game.

As we had released the game in several widely spoken local languages — Bahasa Malaysia (Malay), English, Chinese and Tamil — we were also able to gauge the share rate of the different language-speaking communities.

Johanna: Did any assumptions you had get proven ‘wrong’ or ‘right’, about people’s behaviour or information/news literacy, and what might these be?’

While many people are aware of the term “fake news”, the game highlighted our general experience in that many people are less clear on nuances and the true extent of what constitutes disinformation and misinformation, and the consequences. It also highlighted a lack of self-awareness as to how our own actions, although good-intentioned, could contribute to the problem.

What was interesting was also gauging players’ relatability to the three main game characters. We tried to represent a wider spectrum of realistic characters and scenarios, and while feedback garnered was generally very positive, inevitably, not everyone was able to relate to all the characters.

Johanna: It seems clear that there will always be misinformation. How important do you think self-awareness/individual capacity and basic skills are in reducing the damage/confusion it causes, including in COVID-19? What is key? Critical thinking, but is this perhaps too ambitious?

Very important. With the expansion of social media, authorities often struggle with regulating and managing disinformation and its spread. They run the risk of stepping on personal freedoms, while laws are subject to being abused. They also struggle to create awareness that spreading unverified news, even with the best of intentions, could have severe consequences.

As such, we should all also arm ourselves with an adequate understanding of what fake news entails, critical thinking, news and information (or media literacy) and basic fact-checking skills and knowledge on how our own biases and behaviours contribute to the problem. This will also keep us safe in the long run and create responsible digital citizens. This is especially necessary now when navigating the chaos, fear and uncertainties surrounding this Covid-19 pandemic.

Johanna: How and why did you decide to try out using a game? At one point, the trend seemed to be toward making everyone a fact-checker, but this clearly isn’t the way….

While fact-checking initiatives are very useful and necessary, fact-checking skills are only one part of the solution in curbing the spread of “fake news”. Malaysia Information Literacy Education (MILE) advocates empowering individuals with critical thinking and media literacy knowledge when dealing with information to serve as initial protection for individuals and to complement fact-checking efforts.

We opted for a game to gauge if gamification could be an effective tool to increase knowledge retention. We also hoped a fun, quick and engaging game that was easily accessible could capture players’ attention and increase content virality, which in turn, would help increase audience exposure to the game and the lessons within.

Johanna: In the game, how did you select/design the situations faced by the players, especially the ones that involved dilemmas?

We crafted the various scenarios around real situations which occurred in Malaysia and around the world as we hoped the realisation of this as people played the brightly designed game would emphasise the gravity of disseminating disinformation and the importance of media literacy.

Johanna: What were the results of the focus group discussions you had after you launched the game? What sort of feedback have you gotten?

The game was very well received. However, based on a focus group conducted, some players requested more storylines, elaborate choices and scenarios, as well as a more diverse range of characters to choose from to increase relatability. We are keen to expand on the game, also to allow for more updated scenarios, including on COVID-19 vaccination and more.

(*This story is part of the #fighttheinfodemic series of Reporting ASEAN, which is supported by the Institute for War and Peace Reporting.)