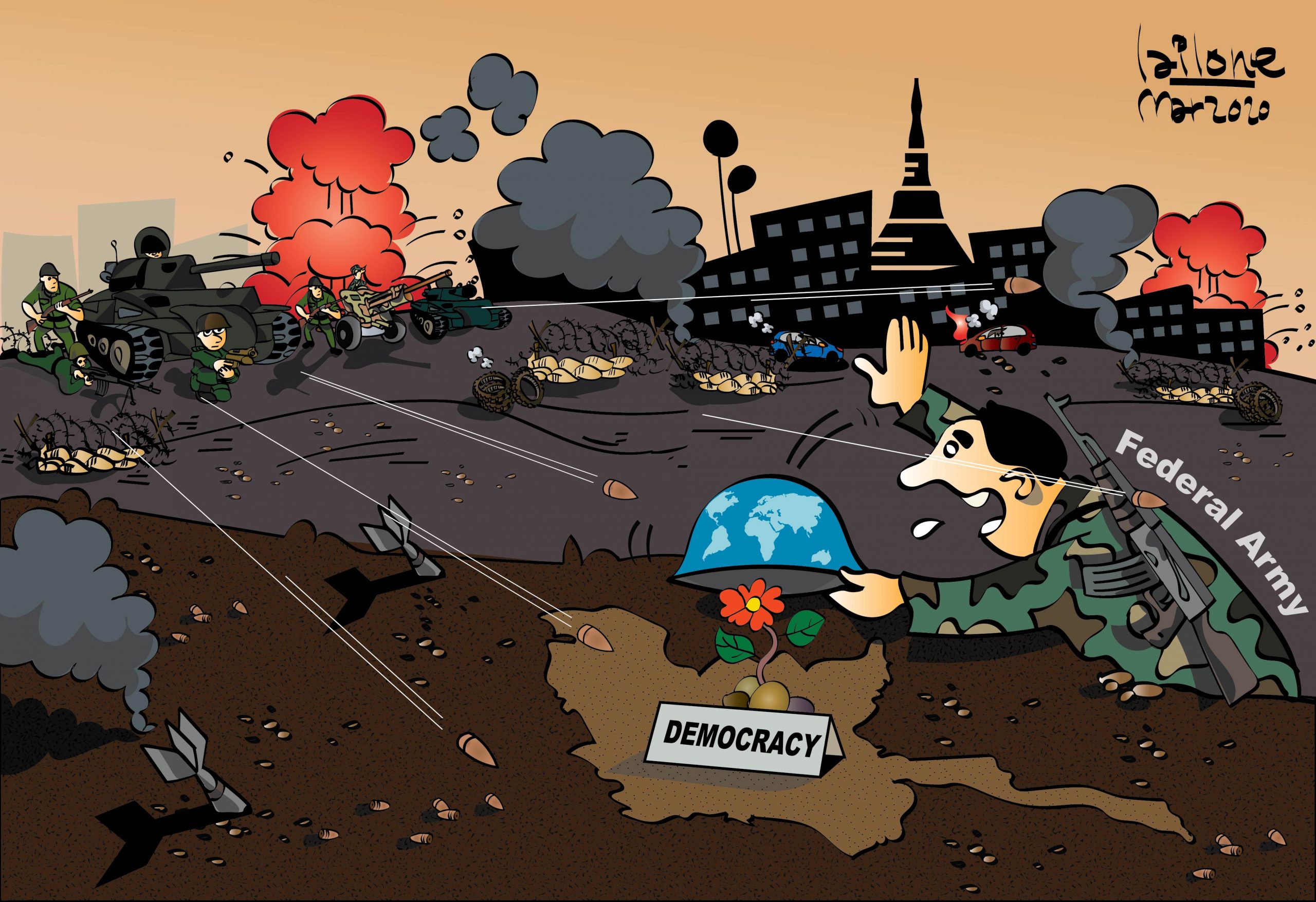 Home » #mediaonmedia » The Myanmar police came for me. My unsuspecting mother offered them tea.

I am a 21-year-old freelance journalist from a town in Shan State, and began my journalism career in late 2018. One day in early February 2021, I was covering and filming a huge protest rally against the Myanmar military coup in my hometown, when armed police and soldiers broke it up violently.

Residents fled, looking for safer locations. I, too, ran for cover and went into a two-storey building nearby where a charity group, which offers free funeral services, has its offices. This group also provides free medical oxygen to patients who need to be transported to the larger general hospitals. I saw three patients in hospital beds when I got to  the upper floor of the building.

Soon enough, the policemen, who were hunting down anti-coup protesters, had forced their way into the building. By the time they reached the upper floor, I had managed, within two minutes, to hide my camera and electronic gadgets, climb onto one hospital bed and pull a blanket over me, pretending to a patient. Fortunately, a staffer with the charity group also told the policemen that I was indeed a patient. I narrowly escaped arrest.

In my life, I have never encountered the deafening gunshots and sound bombs that were all around me that day. I was suffocating from the teargas, and my airways felt like they were on fire. All these I had only seen in action movies. It was an absolutely indescribable moment.

About a month into the Feb 1 coup, the junta’s State Administration Council began to regularly announce lawsuits against journalists under Section 505 (a)  of the Penal Code. These were carried by the military regime’s mouthpieces such as Myanmar Radio and Television (MRTV) or the Myawaddy newspapers, featuring the journalists’ Facebook profile pictures and links.

The military’s targetting of journalists continues. As of 28 May, 87 journalists have been arrested since the coup, and 51 of them remain in detention. The junta has brought various legal charges against at least 22 journalists, most of them under Section 505a, according to data tracked by the Reporting ASEAN series.

Many might assume that it is the more well-known journalists, more than the average freelancers or citizen journalists, who are at higher risk of harassment and arrest by the Myanmar military. In fact, it does not matter: As long as you are a journalist, you are on the military’s radar –- as I am.

This is also because my native Shan State has been a conflict area for decades. It is full of ethnic armed organizations and their several dozens of military battalions. When fighting erupts between these rebel groups and military troops, or when clashes break out among ethnic rebel groups, it is the locals who suffer. Some of them have been abducted by state and non-state combatants who need more ‘recruits’. In short, human rights violations have been a fact of life for my community long before the February coup d’ etat.

Reporting from my state, home to many hilly regions, is very different from reporting in urban areas. After the regime imposed a nationwide internet shutdown in February, I became unable to send video files or even text messages to my newsroom in Yangon.

But I remained an enthusiastic journalist despite the uncertainties about financial income and security at work. I was also aware that I have a lot more to learn and experience in my reporting. I have little knowledge about the safety issues related to news work and have attended only one week-long journalism course so far, organised by a local media organization. But I try my best, using what skills I have.

As a low-profile journalist from a remote area in Shan State, I realised that I am more vulnerable in the military’s crackdown than the experienced journalists in big cities like Mandalay or Yangon.

As it is, there are very few freelance journalists in my town, which is not usually seen as a place when big news happens.

But more than 10,000 of its residents joined the general strike or the Burmese Spring Revolution for days on end. The military brutally dispersed these protests  – shooting live rounds at random, firing teargas. I filed timely reports in that horrific and chaotic situation, but some of them were not aired or published in the website of the news outlet I contribute to. My seniors did not tell me why, but I could not help feeling neglected after having reported amid bullets and teargas.

Meantime, I was no longer secure in my hometown. The regime’s oppressive yes men – the police  – came for me in my home in late February. My mother did not realise the purpose of their ‘visit’ and welcomed them with traditional tea.

Amid the daily reports of arrests by security forces, I fled to a neighbouring town for one week. To be honest, moving around like that was far from easy when one has limited cash. I found myself wishing that more media houses could provide some support for those of us who need to move to safer places.

Many might assume that it is the more well-known journalists, more than the average freelancers or citizen journalists, who are at higher risk of harassment and arrest by the Myanmar military. In fact, it does not matter: As long as you are a journalist, you are on the military’s radar.

I returned to my hometown after some days, but could no longer sleep soundly at night. After all, at that point 14 unarmed civilians had been shot dead since the coup. I have just a few friends as I am an introvert, but was lucky that some activists provided me with a place to stay for a while.

In March, the military junta revoked the publishing licenses of five media houses, namely Myanmar Now, Mizzima, Democratic Voice of Burma, 7 Day News and Khit Thit Media. One among these is the media house I report for. During this time, many staff reporters and editors had been abruptly dismissed or laid. Many freelancers like me lost contact with the seniors with whom we discussed stories.

After the military shut down mobile internet services in early April, I had to fully rely on WiFi services in tea shops – places where the police can easily enter, do inspections and make arrests. On top of my already tight financial situation, I was having to spend 2,000 kyat (1.27 US dollars) each time I sat in teashops to use their WiFi. My editor said the news outlet would shoulder internet expenses of 50,000 kyat (almost 32 dollars) per month, but I have yet to receive this after three months.

I was also feeling quite depressed after seeing that the news desk had not run my reports, but used a story on the same incidents based on viral Facebook photos. It was fair that I get mad about this, I felt. Looking back, I believe that there should be better professional procedures in dealing with freelancers, even though we are not full-time staff.

These are not the only challenges that come with working as freelance journalists, or as citizen reporters. Many news organisations do not provide media identification cards to reporters, let alone have ready protection mechanisms for their journalists in dangerous situations.

This lack of safety-related support made me feel somewhat hopeless, and in despair, about my role as a journalist and my future as one. In the last week of March, I stopped working for a week. But soon, I began to be uncomfortable with staying away from the news, especially after seeing what to me were flaws in the conflicting news reports about the anti-coup events in my town.

I worried that outsiders could easily think that the deaths from local protests were an exaggeration, or even ‘fake news’. They would have no idea about the injustices and lawless actions of the military regime in my town, I reflected.

My own people, I thought, need someone like me, who is a local, to expose the military’s wrongdoings. For this reason, I have decided to drop my retirement plan. I am determined to carry on journalistic work – as long as I do not get arrested by the police or soldiers.

*Han Kha-yar is a female university student majoring in English, whose studies have been interrupted by the February 2021 coup in Myanmar.