JAKARTA, Dec 20 (Reporting ASEAN) – ASEAN’s commitment to pushing women’s empowerment and addressing violence against women is supposed to be reflected in the creation and functioning of its ASEAN Commission on Women and Children (ACWC), which is now all of seven years old. But one wonders how it can address gender issues – or how ASEAN can genuinely include a gender-informed approach across its work – without having gender-disaggregated data and statistics.

When looking for relevant data to use in reporting on gender and women in the region, comprehensive data in ASEAN’s database – a collation of statistics from the 10 ASEAN – are lacking. Many regional and international organizations have been gathering or presenting data with information for men and women at the very basic level, but ASEAN apparently lags behind this standard.

In an interview, the Indonesian representative to the ACWC, Lily Purba, said the commission is yet to collect gender-disaggregated data. “It’s in our plan to collect data on gender,” said Purba, who ended her term as the commission’s chairwoman in September.

The section in the ASEAN Economic Community Department of the Jakarta-based ASEAN secretariat that collects data and statistics is called the ASEAN Statistics Division (ASEANstats). But the only available data are on trade, economics and tourism.

“ASEANstats is currently focusing more on economic indicators, especially on trade, investment and macro-economic indicators,” a staffer from ASEANstats said in an email correspondence with Reporting ASEAN, responding to questions about gender-specific data. The staffer added that the division does not collect much gender-disaggregated data from ASEAN member states, “except for data on population, some educational and employment indicators.”

Producing gender-related data also means collecting and analyzing data that address specific issues that may affect women more than men, and incorporating a gender dimension into data collection processes so that the experience of all genders are properly captured and gender biases are avoided.

Most of ASEAN’s statistics relate to trade, investment and tourism, and media inquiries about other figures can take some time to get responses.

The ASEANstats division collects data officially from the national statistics agency of each member state, and its website provides complete figures on trade and investment between ASEAN countries and their partners. The information is also readily available and downloadable to users. Nevertheless, trying to request specific data, especially on gender, through their website, does not work too well and at the very least, takes a long time, as the site only has economic factors and trade figures.

For now, those searching for gender-related data or statistics broken down by sex, must search through each member state’s database. Some countries’ statistics are easier to find than others. Data in the Philippines is collected by the Philippine Commission on Women, which was established in 1975. In Indonesia, the National Commission for the Elimination of Violence against Women (Komnas Perempuan) and the Ministry of Women Empowerment and Child Protection collect data annually.

Other than data issued by government, gender-disaggregated data are also obtainable through agencies that collect global or regional data such as UN Women, the World Bank or the Asian Development Bank. These usually cover several important topics on gender issues, such as violence against women or the inequality index in different countries. 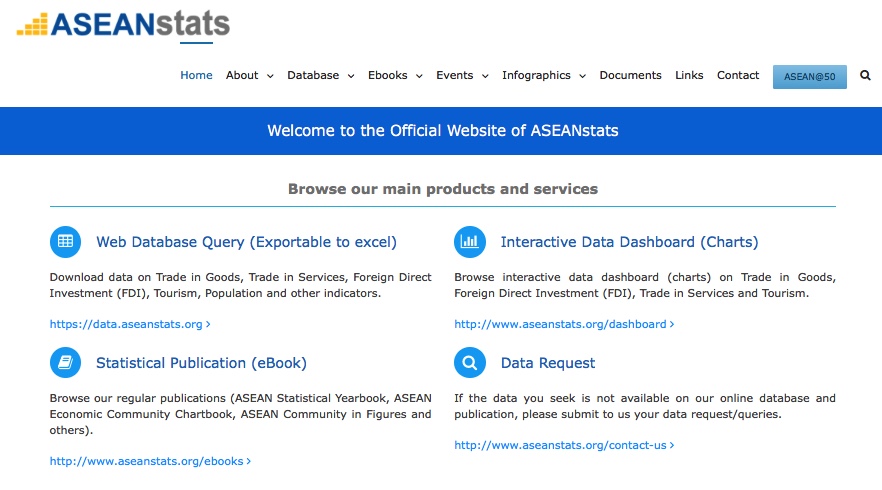 The ASEAN Statistical Report on Sustainable Development Goals (SDGs) in 2017 includes the goal relating to the promotion of gender equality and the empowerment of women. It has complete data, for instance, on the ratio of girls and boys relative to education from the primary to the university levels. Moreover, it shows the number of women in the Parliaments of each member state, a standard indicator of women’s empowerment across the globe.

Lakhsmi Puri, deputy executive director of UN Women, has argued that gender specific data is important to achieve the goal on gender equality. She believes that solid disaggregated data and efforts to put that information into effective use are crucial.

“The absence of data impedes transparency and accountability. Even where there are the best of intentions, the absence of data makes evidence-based policy-making very difficult and restricts how effectively we can advocate for change. And when we cannot advocate for change, it is more difficult to mobilize the resources needed to finance the development outcomes we would like to see,” she was quoted as saying at the November launch of the Global Women’s Leadership Initiative Index in New York.

Definitely, ASEAN member states need to provide more comprehensive data, says Jose Tavares, director-general for ASEAN Cooperation at Indonesia’s Ministry of Foreign Affairs. “In ASEAN, we don’t have complete data that is available yet. I hope with more regional instruments, data will be more open,” he said in a phone interview.

Data collection on gender-related issues is important to assess current challenges as well as progress in gender mainstreaming in all member states. The ACWC is working on data collection for specific issues, such as violence against women, in order to help address this in all 10 ASEAN countries, Purba explained. “ACWC is working with the governments, CSOs and experts on gender to address issues and challenges concerning women more effectively,” she said.

(*This is part of a three-article set of features for the Regional Reporting Fellowship program of the Southeast Asian Press Alliance for 2017.)

To read the main article: https://www.reportingasean.net/can-regional-body-like-asean-eliminate-violence-women/