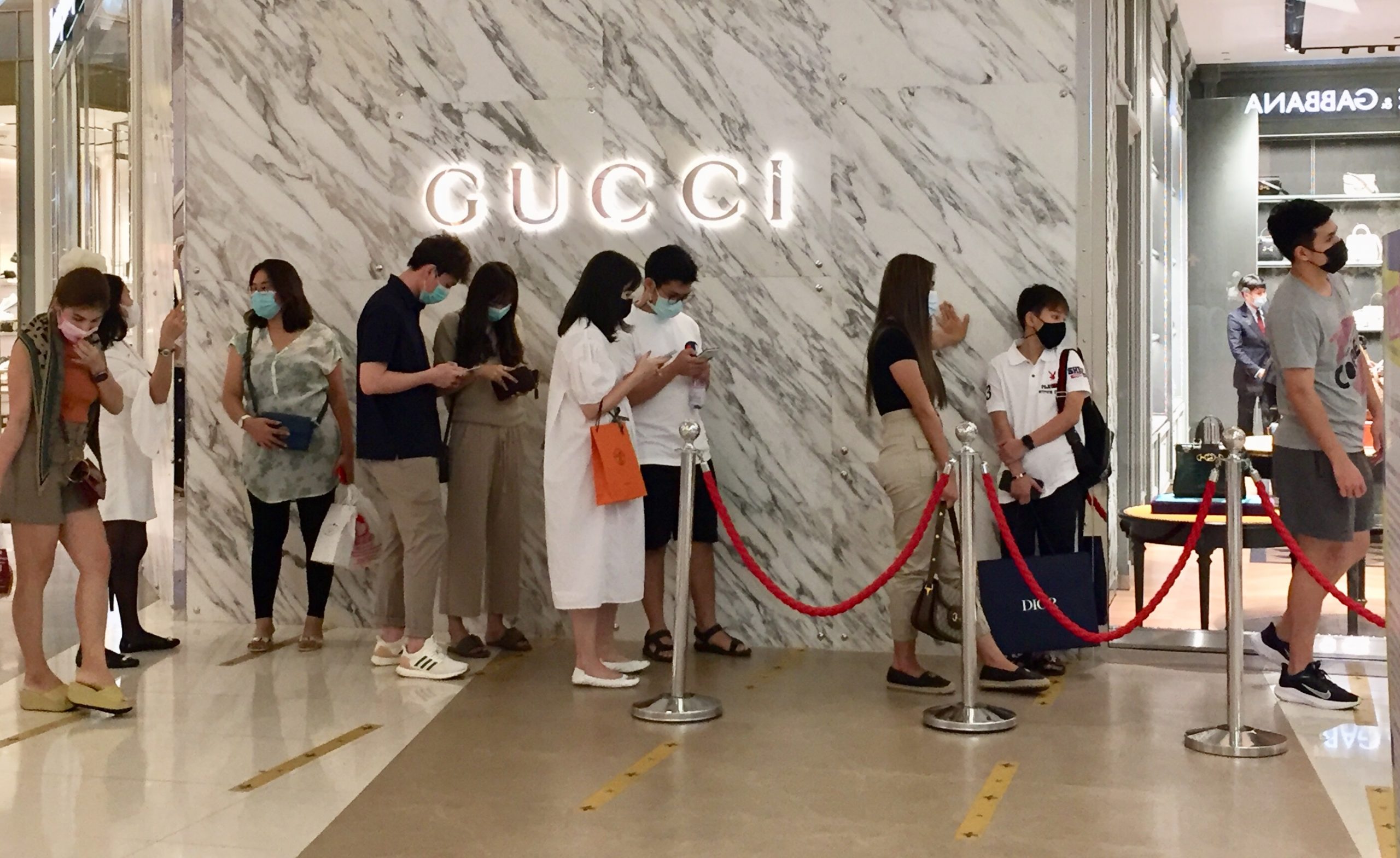 BANGKOK – Thailand finds itself in a pressure cooker these days, dealing with pre-COVID-19 economic weaknesses, the lack of longer-term responses to the economic and social crises from the pandemic, and uncertainty about how much longer people can hold on before falling into poverty, losing jobs or closing small businesses.

This is the picture of Thai society that emerged from a recent World Bank discussion on vulnerable populations in this middle-income country, one whose success in managing COVID-19 is well-known globally.

Less known, though, are Thailand’s pre-existing conditions that have weakened its immunity against shocks such as the pandemic, and threatens to reverse major development gains in a country whose poverty rate fell from 65.2% in 1988 to 6.2% in 2019.

Among these pre-COVID-19 conditions are high levels of household debt on top of savings rates that have been falling since 2007, the large number of people dependent on welfare cards and disturbing indicators on children’s well-being.

Since the welfare card scheme of cash transfers began in 2017, its coverage has grown to cover 71.5% of the poorest one-fifth of Thais as of 2019, World Bank data showed. Even before the pandemic, 35% of the heads of poor households were out of the labour force.

From 2015 to 2019, the percentage of children with stunting (13%), wasting (8%) as well as overweight (9%), had been inching up, going by UNICEF data. A total of 18% of upper secondary-aged children were out of school. Only 57% have basic reading skills and 51% basic numeracy skills, data from the United Nations Children’s Fund show.

These chronic weaknesses have been around for the past five years or earlier, a period marked by economic and political changes and crises, including coups.

Analysts have a shared prescription at this point: Thailand should unleash on the ailing economy the same systems approach it has used to control COVID-19 infections.

“COVID has caused problems for Thailand, but Thailand’s economic problems preceded COVID. It’s been the laggard in the region, and it’s very much stuck in a middle-income trap,” Patrick John Barron, World Bank adviser on fragility, conflict and violence, said at the Oct 27 discussion on vulnerable groups during COVID-19. “That suggests much larger structural issues in the country that need to be addressed.”

Development analysts have a shared prescription at this point: Thailand should unleash on the ailing economy the same systems approach it has used to control COVID-19 infections.

“We are probably falling victim to our own (disease control) success story,” said Somchai Jitsuchon, research director for inclusive development at the Thailand Development Research Institute. “We probably moved too close to the health issue, we should somehow move closer to the economic concerns as well,” he said.

That the Thai government listened to public health experts is not in any doubt. But Somchai says the government needs to have a long-term economic plan since COVID-19 will stay for some time – and get a local public that is strongly against opening borders to buy into the idea of easing up on this to give the economy breathing room. “Now it is time to find a balance, how we should open, how much we should open,” he explained.

Already, Somchai said, Thailand’s income inequality is rising. The graph he used at the World Bank event showed projections of its Gini coefficient, a measure of income distribution that was 36.4 in 2018, exceeding 50 in 2020.

“Overall income levels had a shock and they’re mostly not recovering (after the end of lockdown in May). In some cases, they’re getting worse,” Thomas Parks,  Asia Foundation chief for Thailand, said, citing results of a survey of micro, small and medium enterprises (MSMEs)  in manufacturing and tourism in June and September.

Only 8% of workers reported improvement in incomes since May. From March to May, individual incomes fell by 47% and those of informal workers – which make up over half of workers – dropped by 63%.

Twenty-three percent of tourism MSMEs and 21% of small-scale manufacturers surveyed by the Asia Foundation in June “have likely closed for good, or are on the verge of closing in September,” Parks added.

Surveys by UNICEF in April to May confirm similar trends, including 90% of respondents reporting a fall in household income. UNICEF specialist Tomoo Okubo added that 88% of households are in debt, and over a third reported having a lesser amount of food in each meal compared to pre-pandemic times.

What has worked in East Asia has been huge public spending to inject activity into economies at a scale that only states can do at this time, says World Bank country manager for Thailand Birgit Hansl. “It is something we would strongly advise the government to think about,” she said.

Thailand’s unprecedented pandemic relief package totals 2.2 billion baht. That makes up 12.9% of GDP, which the World Bank says is among the biggest in Southeast Asia.

But analysts identified problems such as people left out of the cash handouts for informal workers that ended in June, slow fund disbursement and banks’ lukewarm reaction to the soft-loan package.

Mechanisms like the 400 billion baht fund for economic revival are hobbled by a mismatch between the fund’s aims and proposals sent in by state agencies, Somchai said. Seventy to 80% of proposals “have nothing to do” (with restructuring).”

“The Thai government is still stuck with the idea of trying to solve day-to-day, short-term issues. They focus more on mitigation,” said Somchai. “There are many sectors that cannot be revived, cannot come back. (But) there’s nothing on the table yet” as a medium and long-term economic roadmap, he added. Officials managing the health situation and the economy do not talk enough to each other,  he said.

As important as an economic plan is public acceptance of it, a crucial factor in Thailand’s health response. Nearly a year since Thailand’s first COVID-19 case, public sentiment is “inclined too much to the so-called zero domestic transmission,” Somchai said.

“The Thai economy is going to have to open up at some point. There will be more resistance against the state if the economy continues to do poorly,” said Patrick John Barron, World Bank adviser on fragility, conflict and violence World Bank.

Somchai suggests that the government step up tracking and testing capacity and allot funds to get vaccines in the future. Then, he says, it can assure Thais that there is a solid, safer system in place that allows more economic activity and open borders.

There are other worrisome poverty trends. Poverty rates in Thailand’s poorest provinces, all located near its borders, are 49.1% in Mae Hong Son and 39.3 in Pattani. NESDC figures show. As of 2018, “most provinces had poverty rates that were higher than 2014,” said World Bank senior economist Nadia Belhaj Hassine Belghith.

She adds that the decline in national poverty figures in 2017 and 2018 was actually not due to better wage incomes, but to income from state welfare assistance. From 2015 to 2017, poverty reduction reversed as market incomes fell, but “social assistance income buffers households”, she said.

This means that Thailand’s 6.2% poverty rate for 2019 would have been higher without welfare support, Belghith explains. (She said  7.2% of the richest 20% of the population are on the welfare list too, reflecting “targeting problems” ).

Thailand’s achievements in cutting poverty the rate thus “remain very fragile”, Belghith said. They rely on “public assistance rather than dynamic changes in terms of the economy”, she added, stressing that Thailand’s widening fiscal deficit (negative 2.3% in 2019 and seen to reach negative 4.1% this year) “questions the sustainability of the social assistance programmes”.

“Yes, it is about balancing (health and economy), but it’s also about prioritisation,” said Hansl, “and perhaps doing things a bit differently than in the past decades that worked very well in the past decades, but might not work at this time”.

(*Johanna Son, who has followed regional issues for more three decades, is editor/founder of the Reporting ASEAN series.)

This analysis was also published by the Bangkok Post here.