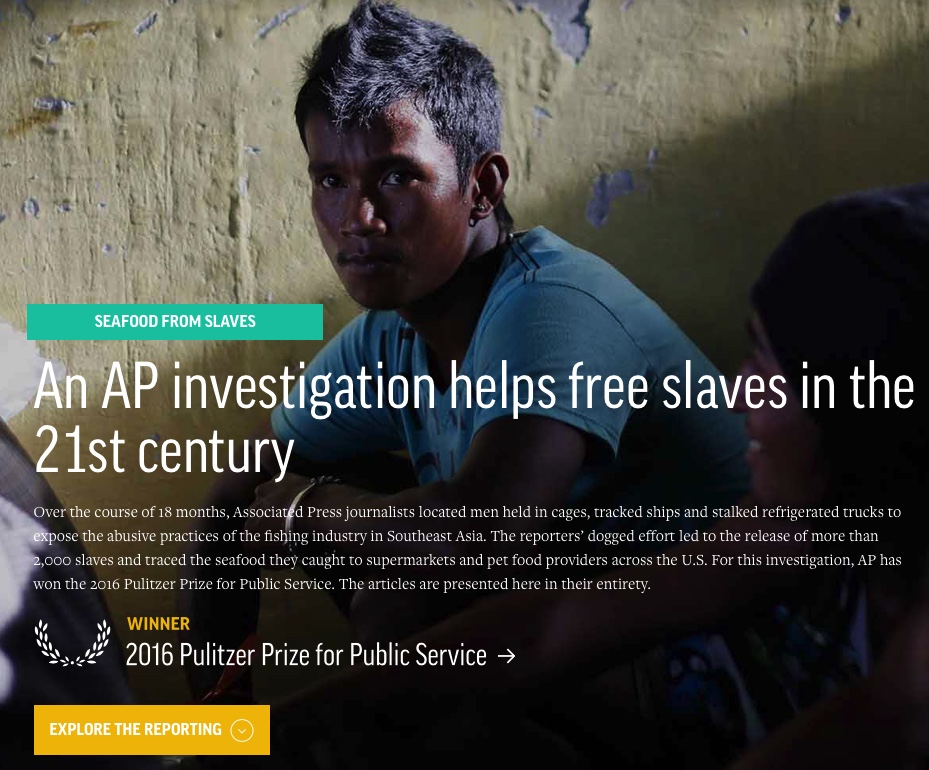 BANGKOK, Mar 11 (Reporting ASEAN) – The larger, long-term impact of efforts to clean up atrocious labor practices in Thailand’s commercial fishing industry may well go far beyond the country, or just employers and workers – to the larger Southeast Asia and to consumers of seafood products overseas.

Thus far, a new report by the International Labour Organization (ILO) from a survey of labor conditions of fishers and seafood workers in Thailand showed improvements and “a mix of progress” over the four-year period till 2017, although violations of labor and human rights persist.

Reports of these abuses have dealt Thailand a black eye, bringing bad news to its exports amid calls to boycott “slave-made products”, as well as a major foreign policy challenge.

International pressure – in addition to advocacy campaigns and media coverage that included a Pulitzer Prize-winning news series on slavery in the fishing and seafood processing industry in 2015 – has been pushing Thailand to do more in strengthening labor law enforcement and standards, and in curbing illegal and unsustainable fishing practices.

“I think probably the biggest factor has been the European Union’s yellow card,” said Jason Judd, ILO senior technical officer who co-wrote the baseline study of the organization’s Ship to Shore Rights Project, which was funded by the EU. “That has helped to hold everyone’s attention to the problem,” he said in an interview at the Mar. 8 launch of the report.

In 2015, the EU gave Thailand, the world’s fourth largest exporter of seafood with exports worth 6.6 billion US dollars a year, a yellow card for failing to do enough to address illegal, unreported and unregulated (IUU) fishing. Under its IUU policies, the EU may give seafood exporting countries a red card and impose a ban on their fisheries products.

This action put the spotlight on Thailand’s fisheries industry not only for illegal and unsustainable fishing, but its violations of labour rights. These range from lack of written contracts, violation of minimum wage laws, withholding of wages and deductions in wages, deception, and steep recruitment fees, which are discussed in the ILO report.

“Everyone is entitled to the same as rights as human beings,” Thai labor official Jarin Jakkaphak said.

Since the yellow card was handed down, Thailand has undertaken a mix of laws and measures to address the EU’s concerns and stave off a full trade ban. It has promised to ratify ILO conventions against the use of forced labor, and confirming unionization and collective bargaining rights.

Major reforms in Thailand’s fishing industry practices – setting up inspection and enforcement mechanisms – would be a step toward in putting in place a norm that could be exported to other countries for them to follow as well, Judd said.

“We’re looking for change all the way along the supply chain, and in seafood it’s very long. There are seven to eight steps between the boat and the plant,” he pointed out.

“Also watching closely are governments in the region as they attempt to take the measure of labor practices in their own fishing industries and build labor law enforcement regimes,” said the executive summary of the ILO report.

CONSUMERS AND BUYERS TOO

“Pressure from the buyers also helps,” Judd said. Big global seafood buyers are already spending more time to see all aspects of the supply chain in Thailand. “The next step for them is to know what is happening in terms of labor practices all along the supply chain,” he added.

“The reactions and results of labor reform in Thailand are also of interest to Cambodia and Myanmar – home to the vast majority of these workers – and to buyers of Thai seafood, such as Walmart, Costco, Tesco, Coles, Simplot, Migros, Mars and Nestle” the report’s executive summary said.

“Buyers worry chiefly about what’s happening in their own supply chain,” Judd said. “So we hope that buyers will insist, press the government to make these changes industry-wide rather than focus exclusively on the practices in their supply chain.”

“What we want, the ILO wants and the employers want is a level playing field, he said. “So if we’re going to have new rules, let’s make sure they’re applied fairly, consistently.”

“Consumers’ attitudes have changed,” Jarin said, adding that it was now usual for scrutiny to cover all parts of the supply chain.

He added that it was important for migrant workers to know their rights, and that this was a key part of the Thai government’s work.

The ILO report presents findings from a 2017 survey of 434 workers, nearly 95 percent of who were from Myanmar and Cambodia, in five zones where commercial fishing boats dock and seafood processing is concentrated across 11 provinces of Thailand. Survey questions addressed working conditions ranging from recruitment, wages, hours of work, safety and health, complaint mechanisms, living conditions, forced labor and legal compliance levels.

It documented progress in fewer reports of physical violence, less than 1 percent of workers in the fishing and seafood industry being under 18 years of age, more fishers reporting having written contracts and higher average real monthly wages.

The average monthly gross wage among respondent fishers and seafood workers has risen to 9,590 baht (309 dollars). At the same time, among fishers for instance, “there has been a doubling of wage withholding” – an ILO indicator of forced labor – to 24 percent in the last four years, as well as an increase in the number of fishers who reported deductions from their wages.

After average deductions, the average monthly figure fell to 6,600 baht (213 dollars), or below the legal minimum wage of some 9,000 baht (290 dollars) in 2017. (A total of 53 percent of respondents from the fishers and seafood workers reported some form of wage deductions.)

The ILO recommended strengthening laws relating to work in the commercial fishing and seafood sector, setting clear law enforcement targets for labor inspectors, rewarding good labor practices by seafood buyers, and expanding worker education campaigns. “The gap between these findings and the Government’s measure of violations – less than 2 percent of the vessels and factories inspected in 2016 were cited for violations – are easily visible,” the report said.

Jarin said the Thai government now requires employers to pay wages through ATM cards to address problems about wages. Improving rights protection and working conditions in the fishing industry is a top government priority, he added.

In 2017, Thailand ratified ILO Convention No. 111 on the discrimination of persons in employment.

Jarin confirmed that the labor ministry is drafting a “forced labour suppression and prevention act” to implement ILO Convention No. 29 against the use of forced labor, and that Thailand is committed to ratifying this in 2018.

The Thai government is also committed to ratifying Convention 188, which sets international standards on work in the fishing sector, Jarin said.

He said he was “confident” that the laws Thailand is putting in place would guarantee the rights of workers in the fisheries industry “under human rights principles”, and “improve the country’s image in this regard”.

At the same time, he said international standards must consider the varying “social context” across countries. “So it is not easy to draft a law that will make everyone happy,” he said.

Judd added that the Thai government has also committed to ratify Convention 98, on workers’ right to organize and collective bargaining. Ratifying this, along with Convention 87 on freedom of association and protection of the right to organize, has been part of rights advocates’ campaign.

Under Thai law, migrant workers are not allowed to form or lead their own unions and can join only Thai-led unions.

A representative of the Thai Tuna Industry Association (TTIA), Attapan Masrungson, assured that employers recognize that migrant workers are entitled to their rights. “If you’re talking about the workers in the industry, the seafood business, the rights of the migrant workers are equal to the Thai workers’. We use the same standards,” said Attapan, TTIA secretary-general.

Since Thailand has not yet ratified the two conventions, the TTIA has been encouraging migrant workers to use its welfare committee to raise their concerns about work issues.

“So, don’t worry,” she said. ‘Talking about the (migrant workers’) value in the industry, (it is) equal.” 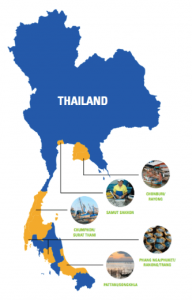 Yellow zones show the areas where the ILO study was carried out.

The data in the ILO report shows that irregular migrants continue to make up a good part of the workers in the Thai fishing industry. Nearly two-thirds, or 65 percent, of the migrant worker respondents had a ‘pink card’, a form of identification given by the Thai government as part of its attempts to register migrant workers – totalling some 3.7 million – after 2014.

Only a third of respondents had “regular migrant status” via the national verification process, an agreement between governments or had a passport and visa only, the ILO study said. “The migrant workers were asked if they had ever had irregular status in their time in Thailand; 43 percent said yes and on average, they had such status for a year,” the same report said.

Jun. 30 is the deadline for migrant workers to complete the nationality verification process and legalize their stay in Thailand. The law on migrant workers takes after June, folllowing its postponement in 2017 after huge numbers of migrant workers from Cambodia, Laos and Myanmar returned home amid fears about this law.

At a Mar. 6 visit to Samut Sakhon province, a hub for the fishing and seafood industry, Thai Prime Minister Prayut Chan-ocha was quoted as expressing impatience with the slow progress of the registration process, which includes the use of retina-scanning machines. Migrant workers who fail to register on time would have to be arrested, ‘The Nation’ newspaper reported him as saying.

The three-year ILO project’s final conclusions will come in 2019, when it does another study on working conditions in the commercial fishing industry.