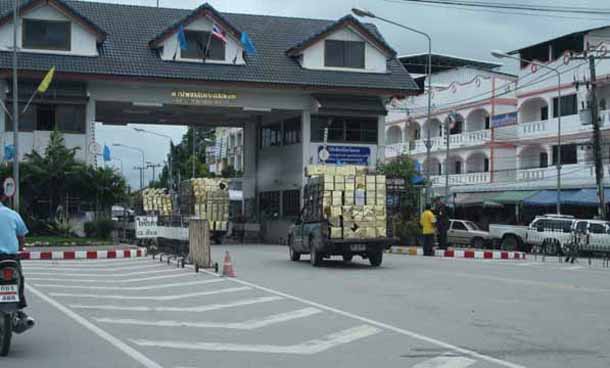 RANGOON, Jan 11 (Reporting ASEAN) — On the heels of the launch of the ASEAN Economic Community in January, Burma and neighboring Thailand are making plans for a multi-billion dollar trade boost next year.

Thailand is second only to China as Burma’s largest trading partner, and both countries are hopeful that they can make strides toward growing total trade volume by billions of dollars in the year ahead. The Bangkok Post reported on Thursday that the two Asean nations will hash out ways to increase their bilateral trade volume in 2017 to US$10-12 billion at a joint trade commission meeting in Naypyidaw on Jan. 14.

Myint Cho, director of the Ministry of Commerce, said there were several avenues Burma and Thailand could take to enhance trade, including through tackling smuggling and easing some restrictions.

“If we can turn smuggling routes into a form of legal trade, that would benefit both countries. There’s still illegal trading going on, and what we need to do in order to increase our trade volume is to have a mutual discussion of the issue,” he said.

Myawaddy in Karen State is the largest of five official checkpoints for overland trade between Burma and Thailand. Some 150 to 200 trucks cross through the border station from Thailand each day.

He added that another way for Burma and Thailand to reach their trading goals would be for Burma to consider a re-export system, since trade across the Sino-Burmese border is considered illegal in China, while products from Thailand have relatively easy access.

“Relaxing some restrictions so that we can re-export Thai products to China’s Yunnan province would perhaps be one of the most strategic mechanisms to facilitate trade.”

In the meantime, rampant smuggling will only hold up trading ambitions.

“Data from Thailand’s end is always higher than data from Burma because smuggled goods are still going through borders. We need to take care of this,” Maung Maung Lay, vice chairman of the Union of Myanmar Federation of Chambers of Commerce and Industry (UMFCCI), told The Irrawaddy.

For instance, according to figures from Burma, the total value of imports that passed through Mae Sot into Myawaddy between April and late November of 2015 reached over $400 million, up from $198 million over the same period in 2014. By contrast, data from The Bangkok Post showed that for the first 10 months of 2015, bilateral trade totaled $6.58 billion.

“Products from Thailand are superior to products from other countries in the region. And given that Burma borders Thailand, I believe that we’ll see a boost in our country’s trade volume, as long as we approach the situation strategically,” Maung Maung Lay said. (END/Reporting ASEAN)

*This story was produced for the ‘Making AEC Work: Digging out Non-Tariff Barriers’ series of the ‘Reporting ASEAN: 2015 and Beyond’ programme. The ‘Making AEC Work’ series of IPS Asia-Pacific is in partnership with The Asia Foundation. A version of this story was first published in ‘The Irrawaddy’: http://www.irrawaddy.com/business/thailand-and-burma-set-sights-on-boosting-bilateral-trade.html