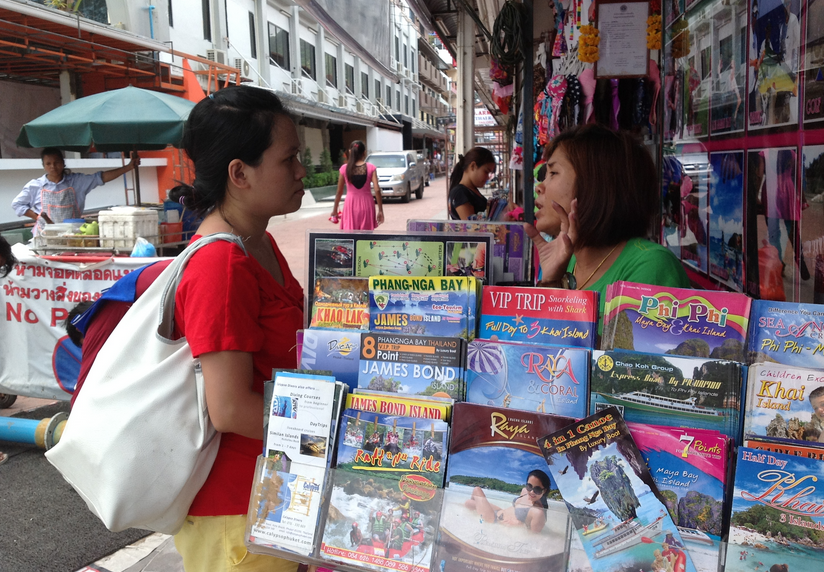 By Thanh Le, The Saigon Entrepreneur*

In her five years in the tourism business in Phuket, she has witnessed an ever-growing number of tourists continuing to flock here to one of Thailand’s most famous tourist spots. But the irony behind this success is not lost on her: while she has been earning more money from tourism, it has been putting pressure on the environment in Phuket, southern Thailand.

This fact, painful to Pinporn, is by no means obvious only to her. The tourism managers of South-east Asian countries are well aware of the dilemma that comes with pushing tourism as an income earner – their mission being how to protect and manage the natural beauty of their tourist areas while the wave of tourists, drawn by this beauty, increase year on year, and take a toll on the very environment that draws foreign visitors.

A Wish for Fewer Tourists?

The number of tourists coming to South-east Asia over the past 20 years has grown by an average of 10 percent annually. From 40 million in 2001, the number of visitors in the region reached 81.2 million in 2011. Of this number, tourists from ASEAN countries accounted for 46.5 percent. Those from other Asian countries accounted for 27.6 percent; and from Europe, America and Australia, about 21 percent. The strong development of the tourism industry has made a significant contribution to the region’s economies. In 2010, revenues from the tourism sector of ASEAN countries reached 62.5 billion U.S. dollars, an increase of nearly 10 billion dollars over that of 2009.

The growth and development of tourism contributes to South-east Asian countries’ progress in reducing poverty. The tourism industry also creates jobs for local people and provides support to local authorities in improving education and addressing social problems. It is by no means an insignificant contributor to South-east Asian economies. In the case of Thailand, travel and tourism is expected to account for 16.3 percent of Gross Domestic Product (GDP) in 2012, and to create nearly 4.5 million direct and indirect jobs, according to a report by the World Travel and Tourism Council, In total, these account for 11.4 percent of the total employment in the country.

In Vietnam, tourism already accounts for 4.3 percent of GDP and 3.7 percent of all jobs – numbers which are expected to rise to almost double the global average over the next 10 years.

However, there are two sides to one coin and tourism development has its minus points, too. Together with the inflow of money comes risks such as greater pollution, devastated landscapes and changes in local culture. The pristine beaches, virgin forests and windy passes in South-east Asian countries have the footprints of investors, travel agencies and travelers all over them. Resorts and hotels are sprouting up, from the beaches to the foot of the mountains and on hills, thus triggering problems such as deforestation and waste.

Indeed, many of those who work in tourism, like Pinporn Teerarak, smile and greet tourists in a friendly manner. Only when they sit down, all alone, do they feel bad when they acknowledge that the environment is being damaged. Sitting on a shop looking out to the Patong beach, Pinporn dreams of Phang Nga Bay, her hometown, which she feels is lucky for its having fewer tourists and thus being more able to maintain its pristine look.

“After graduating from university in Bangkok, I came to Phuket just to help my sister do her business, explained Pinporn. “But then I saw I can earn money here because tourists are eager to pay for tours and travelling in Phuket. The number of tourists coming here has increased year by year, even after the (2004) tsunami natural disaster,” she said.

“Phuket changed dramatically during the last five years I have been here. It is now more crowded and more dirty. Come to my hometown in Phang Nga Bay, you will see the difference,” she told this reporter.

The balancing act that tourism development requires has had many tourism managers in South east Asia think of ways to manage it, including through a limit-tourists strategy.

In Thailand for instance, Nalikatibhag Sangsnit, director-general of The Designated Areas for Sustainable Tourism Administration (DASTA), a public organisation, has been quoted by local media as stressing that the country should not keep focusing on tourist numbers. Instead, it should think of how to get these tourists to stay longer and spend more. The hidden cost of rising tourist numbers is environmental damage, he told a DASTA-organised conference called ‘Final Call: Stepping Stone to Sustainable Tourism in Thailand’ in March 2012. 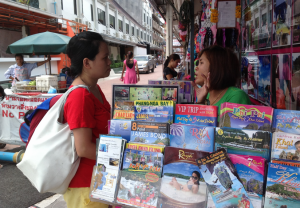 Thai tour planner Pinporn Teerarak acknowledges that tourism, which is how she makes a livelihood, also takes a toll on the environment.

At the same time, taking this approach is unlikely to result in a reduction in the number of tourists, as can be seen in Singapore’s experience. Prices for travel services and tourism in Singapore are quite expensive compared to other South-east Asian countries. For example, 100 Singapore dollars will get you a 10-sq metre room in Chinatown, but the same amount of money can get you a room at a 4-star resort in Thailand.

But despite its more expensive rates, Singapore continues to see more visitors coming. Its number of visitors increased in 2011 by 14 percent from the previous year, making the city-state rank fourth in terms of foreign visitors in the region.

One fact unlikely to change is that the demand for travel will continue to increase, not decrease. After all, the improvement of living standards has allowed people more opportunities to explore the world and improve their understanding of their surroundings.

Green tourism is one of the keys to sustainable tourism development, says Chutathip Chareonlarp, managing director of the Representative Office of Tourism Authority of Thailand in Vietnam. “It is not easy at all to make all the tourist stakeholders understand and follow green tourism patterns. It is such a long and challenging process, but it is worth a try,” she added. “I have worked in the tourism industry for more than twenty years and was trained in doing green tourism a long time ago. But just recently, I see there is a vast change in people’s knowledge about green tourism.”

Green tourism, ecotourism, sustainable tourism, and responsible tourism – all of these are just different names, but are similar to one another in referring to a kind of travel that does not have negative impacts on the natural environment and local cultures.

Making full use of the advantage provided by their seas and mountains, many South-east Asian countries are already offering green tourism products, including sightseeing opportunities and visits to areas of conservation, bird watching, home stay with locals, biking, tree planting, diving to look at coral and fish, enjoying trees and flowers, forest and exploration and waterfall climbing. Through such tours, tourists are encouraged to mingle with nature, and help to improve the lives of local people without causing too much harm to the environment.

Thailand is a leading country in the region when it comes to the idea of green tourism. In May 2012, Thailand was awarded with a prize from Pacific Asia Travel Association (PATA) for its 7 Green Tourism campaign. During this campaign, the Tourism Authority of Thailand has raised the awareness and understanding of green tourism by different stakeholders in the industry –from travel agencies, hotels, restaurants, recreation facilities to tourists. According to Ms Chutathip, the Thais have been developing its green tourism activities for a long time and this year’s award is the result of the combined efforts of the country’s tourism industry.

The Can Gio mangrove forest is a world-class biological reserve, but seems to interest few local tourists.

But doing green tourism is not just about offering more sustainable tourism products, but also the creation of more green to improve the liveability of one’s surroundings. Singapore stands out for its efforts to be greener. The city-state does not have a lot of natural resources, but it has created greenness by planting trees, even artificial tree. Its Garden by the Bay has created “super trees” of 22-50 metres tall, with the ability to synthesise solar energy, receive rainwater and filter the air, and photovoltaic systems to convert sunlight into electrical energy. Inaugurated in June 2012, this garden is expected to receive 5 million visitors each year.

In the long term

Tourism managers may think of many ways to apply sustainable tourism. But for it to be truly sustainable, it is the travelers, first and foremost, that should have knowledge and recognition of the value of nature.

Currently, tourists from Western countries who appear to be more aware of green tourism account for just about 20 percent of tourists in South-east Asia. Tourists from the region account for about half of visitors to ASEAN countries, but many often limited understanding, of interest in, what makes for green tourism.

This reporter’s experience during a field trip to Vam Sat Forest, a world biosphere reserve some 30 kilometres from the southern Vietnamese city of Ho Chi Minh City, provides a glimpse of this. On this trip, only Japanese and Australian tourists seemed to be really interested in watching the bird garden and river. In contrast, Vietnamese tourists kept yawning in boredom. A group of tourists even took along a bottle of wine and was busy drinking it, while waiting for their children who were watching the bats. “What a boring place. There is nothing to see. I came here because this is a trip organized by my company and everyone has to participate,” said Minh Nguyen, a Vietnamese tourist. “I would never come back in the future”. He is one of many local tourists who associate tourism with spending money for travelling, fun and eating, instead of enjoying nature and preserving its beauty.

“In achieving this vision, there are several measures, including the development of ASEAN tourism standards for green hotels, spa services, public toilets, home stay and, recently, we added the ‘clean city tourism standard’, ” Eddy Krismeidi Soemawilaga of the infrastructure division of the Jakarta-based ASEAN Secretariat said in an email interview. “Through the establishment of these standards, those tourism establishments and destinations could follow certain agreed criteria and requirements at the regional level.”

However, he also explained that the implementation of those criteria are not must-do measures but are based on the principle of each member country’s willingness. Soemawilaga said: “All those standards that would support the sustainable tourism in the region are voluntary. There will be no obligation to strictly follow related standards.”

When it comes to setting standards and following them, it seems that the ball is in the hands of each ASEAN country. But ASEAN-set guidelines will hopefully come with training programmes to help South-east Asian meet the region’s sustainable tourism criteria in the future.

*This report was carried out under the IPS Asia-Pacific reporting series ‘Reporting Development in ASEAN’, supported by the International Development Research Centre.

The original Vietnamese version of this article can also be read at: