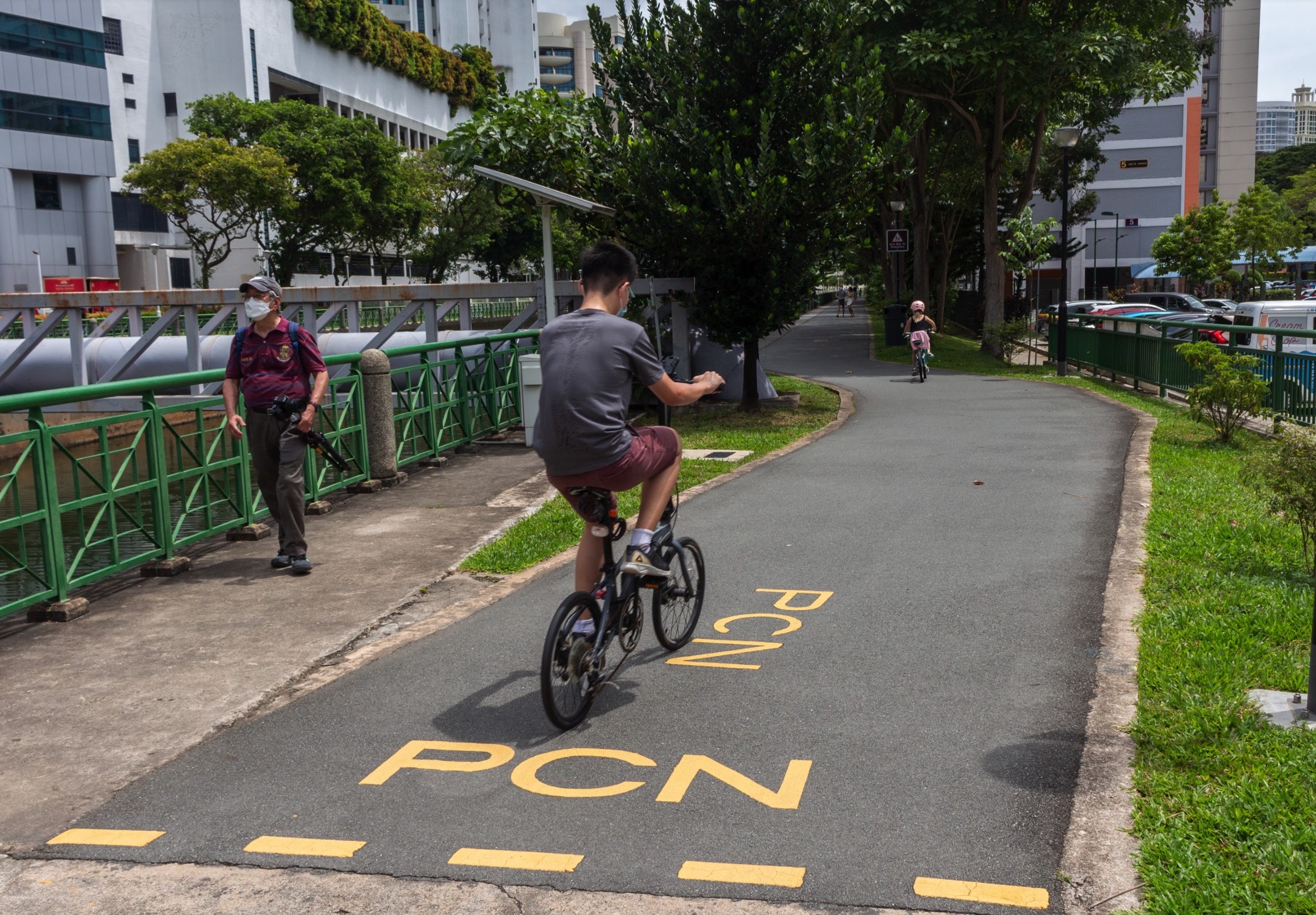 Home » Features » Singapore: Will the Cycling Fad Outlive the Pandemic?

Read the first article in the ‘Greening the Garden City’ set here.

“I guess I was paranoid (about COVID-19), so it felt a bit dangerous to be in the gym or a public pool. So I was doing more outdoorsy kind of activities, like cycling,” said Sophie Wong, an executive who works in public outreach.

She was far from alone in rediscovering the outdoors during the nearly two months that Singapore spent under a strict pandemic lockdown, which began in April 2020. As the country of 5.45 million people ground to a halt, one activity enjoyed a curious uptick – cycling.

“I think it’s because you can’t go to the places that you used to go to,” Wong said. “Singapore used to be a place where malls are all the rage, right – everyone goes to the shopping mall to spend their time.”

Cycling, thus, was a natural remedy for lockdown-induced cabin fever. “The only way people could get respite from staying home all the time was to go out and exercise,” Wong explained. Lockdown rules, in what was dubbed the ‘circuit breaker’, had barred all but a handful of out-of-home activities. “Strenuous exercise” was one of the few legally permissible reasons to leave home, and the only activity that could be done without masks.

Singapore is not back to business-as-usual these days, but there is a semblance of relative normalcy. People can leave home for social gatherings, not just exercise. Public activities and interactions have resumed with safe-distancing measures.

While it is too early to tell whether it will become more than a pandemic-era fad, cycling  has clearly become much more popular, whether as a means of transport or for exercise. The use of shared bicycles has picked up noticeably, and so have bicycle purchases.

This trend has been made easier by Singapore’s cycling infrastructure. Bike-sharing systems, bike lanes and integrated transport systems and parks have been in place before the pandemic.

“I [can] get to places very quickly on my bike, without having to go on public transport,” a commuter says.

My Bike Shop is among the stores that saw a rush for bicycles in 2020. “We have always had steady demand for folding bikes and cycling needs … [and] the demand continued [after lockdown] as cycling was a good outlet as travel was restricted,” a spokesperson said.

Wong purchased a mid-range foldable model from My Bike Shop in March, having gotten into cycling through the shared bicycles available across the city-state. “Around my house were all these [shared bicycles], so it seemed like a good activity to do,” she recalled.

The Bluetooth-enabled dockless bicycles, which cost one Singapore dollar (70 US cents) for a 30-minute ride, debuted in Singapore in 2017. The city-state has a fleet of 40,000 shared bicycles, managed by two operators.

Bicycle-sharing’s appeal lies in its seeming ability to reconcile environmental concerns and a host of urban needs. It can alleviate automobile saturation by maximising the number of trips each vehicle makes – making idle bicycles (or cars) parked in homes and on streets redundant through a healthy circulation of users and vehicles.

Apart from being emissions-free, bicycle-sharing has been touted as an effective “last-mile” solution when integrated with an existing public transport system.

While declining to reveal ridership data, a spokesperson from SG Bike, which operates 25,000 shared bicycles, noted that the company “continuously sees growing demand in terms of trips and users” even amidst the pandemic, and that ridership has expanded across both recreational and commuter markets.

Singapore’s Land Transport Authority also reiterated in July 2020 the importance of bike-sharing in the country’s goal of becoming a “car-lite society”.

Meantime, retailers say that there continues to be increased demand for privately owned bicycles, almost all of which are imported. However, the same forces that catalysed demand have also squeezed supply.

My Bike Shop reported “major delays” of two to three months and price jumps of at least 15% due to disruptions in global supply chains during the pandemic. “Lead times for some of the brands and desirable models are averaging between six to 10 months,” the retailer added.

“Actually, cycling has a very low barrier to entry – you can now just order a bike from Lazada, and it’ll come in a few days and for less than one hundred (Singapore) dollars (74 US dollars),” said Wong.

Today, Wong cycles at least twice a week, usually to a park 2.5 kilometres from her home. From there, she accesses routes leading to the city centre or the northeast coast of Singapore. “It’s very convenient because we have all the tracks and trails available for bikes.”

These trails make up Singapore’s Park Connector Network, corridors that link parks with other green spaces across the city, which is less than half the size of Bangkok and only slightly larger than Jakarta.

The popularity of these corridors, which stretch for more than 300 km islandwide, surged during the pandemic. “The National Parks Board (NParks) has seen a significant increase in the usage across our nature reserves, gardens, parks, and park connectors since the start of the COVID-19 pandemic,” said Kartini Omar, group director for parks development at NParks.

A survey by NParks, conducted from January to March 2021, revealed that park usage among its 1,500 respondents had increased to 82% in 2020 from 77% in 2017. In a statement on the Singapore launch of its Maps cycling navigation feature – its first in Southeast Asia – Google noted a “huge spike” in searches for cycling routes in the country. Such searches jumped 75% from 2020 and 400% from 2019, it reported.

“I think we have done very well in connecting a lot of places – not just between green spaces, but between other places like shopping areas,” Wong said. “I [can] get to places very quickly on my bike, without having to go on public transport.”

The development of Singapore’s cycling infrastructure has been in the works for almost a decade.

Plans to develop neighbourhoods like Ang Mo Kio and Tampines into “model walking and cycling towns”, for instance, were first unveiled in 2014 and 2017 respectively. A 2013 target to construct 700 km of cycling paths by 2030 was boosted to 1,320 km by 2030 as part of a 1-billion Singapore dollar (738 million US dollar) Islandwide Cycling Network Programme, announced in March 2020. A target to extend the Park Corridor Network by 160 km was also announced that month. Both the 1,320-km and 160-km targets were later incorporated into the Green Plan 2030.

But the pandemic’s impact has thrown up some roadblocks to these plans.

Singapore’s construction sector, heavily dependent on migrant labour, has been battling acute labour shortages under the strict border controls owing to the pandemic. Supply chain disruptions have seen the cost of raw materials skyrocket. COVID-19 “has caused some park development projects to be delayed,” said Kartini.

While there is political will to develop Singapore into a greener bike-friendly city, there are  also realities of nature to consider. Its tropical weather and heavy rainfall (it rains almost 200 days a year) limit the practicality of cycling as a day-to-day means of transport, though commuters like Wong manage the humid 30°C weather thanks to shower facilities at their workplaces.

Cycling can thus be a complement rather than an alternative to the rail and bus network, as envisioned under Singapore’s ‘Walk Cycle Ride’ plan. Since 2017, commuters have been allowed to bring foldable bicycles on trains and buses, to enhance first and last-mile connectivity.

“Having [such] incentives would definitely encourage some people to pick cycling up as a travel option,” said Wong. “[But] there’s this whole idea of convenience as well. You know, just using public transport is so much more convenient than lugging your bicycle onto the bus, or driving might be even more convenient. That’s a big factor at the end of the day.”