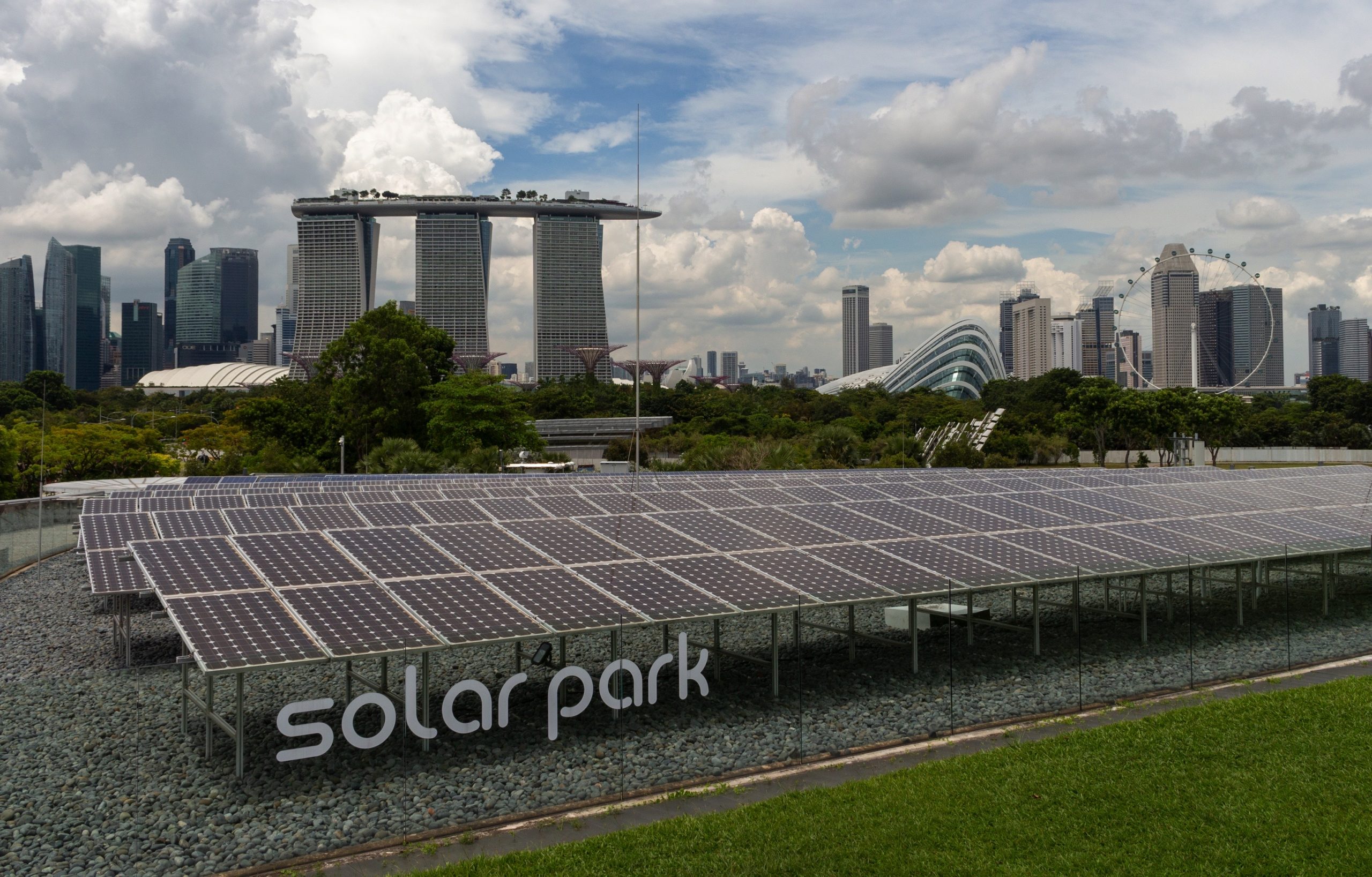 Below is the last of four articles in the ‘Greening the Garden City’ story set. Read the first , second and third articles.

More than a few eyebrows were raised when Singapore’s trade minister warned that the country’s“transition to renewable energy, including imported electricity may not mean cheaper electricity.”

The remarks were made by Minister for Trade and Industry Gan Kim Yong at the 14th Singapore International Energy Week in October 2021 , amid a month of volatility in the electricity market.

A “perfect storm” of factors – a surge in spot liquefied natural gas (LNG) prices in the global market, a dip in supply of piped natural gas, and increased domestic demand for electricity – had upended the country’s wholesale electricity market. It shuttered five electricity retailers, all within the first three weeks of October.

“I felt lucky that I had chosen the ‘right’ [electricity] provider, and that I had discounted rates,” said Soh Cheong Jun, who had signed a fixed-price plan with an unaffected electricity retailer about six months before the sudden closures. “But as a consumer I feel worried because after all, after my contract ends, I’ll have to start paying those kinds of prices.”

In Singapore, consumers can choose from a range of electricity retailers and price plans, which can range from 25 to 30 Singapore cents (19 to 22 US cents) per kWh.

Having these options is a result of the liberalisation of the city-state’s electricity market from as early as 1995 – a step that Singapore was the first country in Asia to take. It expanded its Open Electricity Market scheme islandwide in 2018, enabling retailers to purchase electricity in bulk from the wholesale market and resell it to consumers in an open retail market.

For some consumers like Soh, the recent instability of the electricity market has pushed to the back burner any talk of an energy transition away from fossil fuels, towards using more renewable or low-carbon alternatives.

There is, at the end of the day, only so much an individual can care about beyond the near-term if basic costs of living are unsustainable, he said. “I try to switch off things [at home] when I can, so I have already done my part. I feel like there’s very little else I can do,” said Soh, a banking professional.

Any transition towards a sustainably powered Singapore, a city-state of 5.45 million people, will thus entail a delicate balance between affordability, reliability, and sustainability – an “energy trilemma” that, the government has warned, is unlikely to result in the fulfilment of all three considerations.

Singapore generates 95% of its power from natural gas, a fossil fuel that burns fewer greenhouse gases than coal or petroleum products. It is either piped from neighbouring Indonesia and Malaysia or shipped from other markets as LNG. The remaining 5%  of the power mix is generated from coal (1.2%), petroleum products such as diesel and fuel oil (0.6%), and waste, biomass and solar sources (3.2%), going by government figures.

“The basic and biggest difference [between Singapore and the rest of Southeast Asia] is that we do not have any natural resources ourselves,” said Christopher Len, senior research fellow at the National University of Singapore’s Energy Studies Institute. In contrast with Indonesia and Malaysia’s offshore oil and gas fields as well as Laos’ hydropower resources, Singapore is “totally 100% dependent on our external environment,” he said. “So that has come to shape our energy strategy as well.”

Singapore’s cloud cover and humidity limit the intensity of solar radiation, while the lack of wide, open land in the 729-square-kilometre city-state precludes the construction of large-scale solar farms.

The appeal of solar power in Singapore goes beyond its green credentials.

Besides being a technologically mature means of sustainable energy, solar also offers the city-state the attractive opportunity to produce its own energy – and even a potential buffer from the vicissitudes of the international energy market.

This is especially so given the lack of other domestically generated sources of renewable energy. Low wind speeds and weak tides limit the viability of wind and tidal power, while the country’s geothermal potential is in its early stages of exploration.

The government announced in 2019 plans to increase the country’s solar energy deployment by five-fold to at least a two-gigawatt peak by 2030 – or enough to power some 350,000 households for a year. This target was also incorporated into the country’s Green Plan 2030.

Solar, however, is not without its limitations.

Singapore’s cloud cover and humidity limit the intensity of solar radiation, while the lack of wide, open land in the 729-square-kilometre city-state precludes the construction of large-scale solar farms.

“Singapore takes a technology-oriented approach [to energy] since it is limited in space. It is limited in natural resources. It actually puts more work on technology and innovations,” said Mary Ann Quirapas-Franco, research fellow at the Energy Studies Institute.

“While the other Southeast Asian countries, because they have space, they have natural resources, the mindset really is installed capacity,” added Quirapas-Franco, referring to the construction of large-scale infrastructure to build power capacity.

While little can be done about Singapore’s cloud cover and humidity, the country has found innovative workarounds for its space constraints.

Given the impracticality of setting up sweeping solar farms like those in countries like Australia, which is set to build the world’s largest solar farm in its vast northern outback, multi-agency governmental initiative SolarNova has been focusing on constructing rooftop solar photovoltaic (PV) systems across Singapore’s highly urbanised landscape since 2014.

A government-commissioned solar roadmap has also highlighted the potential to build vertical PV systems on building facades, integrate PV systems into existing noise barriers along the island’s rail network, and even construct over-arching PV systems across existing roads and flood canals. A 60-hectare solar farm on an offshore landfill is also being considered.

Efforts to maximise space for PV systems have not been restricted to physical land.

Two large-scale floating solar farms were unveiled in 2021 – one the size of seven football fields in the open sea off Singapore’s northern coast, and another the size of 45 football fields in an inland reservoir in the west of the country. The latter, which has a 60-megawatt peak capacity, powers five local water treatment plants, making Singapore one of the few countries in the world with a 100% green waterworks system. Two more inland floating farms are in the works.

In spite of these advances, it is unlikely that solar will displace natural gas any time soon.

The solar roadmap concluded that even in an “accelerated” scenario with increased PV adoption and the availability of high-efficiency technologies, solar will at best meet only 7.4% of Singapore’s total electricity demand by 2050.

Retail prices for solar energy have also yet to stabilise at an economically competitive point for consumers.

Consumers like Soh are hesitant to sign up given the novelty of such plans: “I can’t see or know whether [the electricity]really comes from that [solar] source…. I can’t justify it.”

“The import of electricity or our growing emphasis on renewables, in a way, has never been to 100% replace natural gas, because it’s impossible,” said Len. Singapore aims to import up to 30% of its electricity demand from lower-carbon sources in the region by 2035.

Imported natural gas, a non-renewable energy source that many countries see as a bridge fuel in cutting dependence on fossil fuels, will thus continue to play a key role in underwriting Singapore’s energy security – at least for the foreseeable future, Len added. “Whether we want it or not, we are interconnected with the global energy market.”