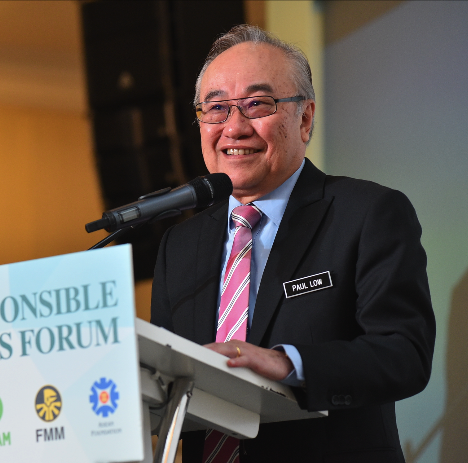 KUALA LUMPUR, Nov 6 – There was no shortage of discussion about bribery, corruption and what weapons to fight them with in the world of business and government, ranging from forming local networks to using international instruments, all to encourage responsible, ethical business as norms of doing business in the Association of Southeast Asian Nations (ASEAN) region.

There was even an offer that made the headlines when the embattled Malaysian government, whose prime minister is under investigation for corruption and the target of calls for him to resign, offered to be a “test bed” for corporate social responsibility in ASEAN at a recent conference here. 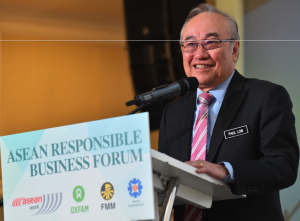 “As I am in government, I am prepared to commit Malaysia to be a test bed for CSR,” Sen. Paul Low, minister for governance and integrity in the Malaysian Prime Minister’s Department, told the ASEAN Responsible Business Forum held here on Oct. 26-29 with some 250 participants from governments, civil society, trade unions, academe, ASEAN member states, and companies. The conference was organised by the Singapore-based ASEAN CSR Network, with the ASEAN Foundation, Oxfam and the Federation of Malaysian Manufacturers.

The statement from Low, the conference guest of honour, came amid a raging scandal and public anger and street protests over accusations that Prime Minister Najib Razak received 681 million US dollars into his personal account from companies linked to 1 Malaysia Development Bhd (1MDB), a state investment fund that he manages.

Malaysia’s central bank, anti-corruption officials, the Federal Bureau of Investigation and a US federal grand jury, as well as the Hong Kong and Singapore governments, are investigating Najib and persons close to him in an international corruption probe linked to the purchase of properties in the United States. Swiss authorities have also frozen millions of dollars in bank accounts linked to 1IMDB.

Najib has denied the accusations, and has fired Cabinet ministers who questioned him and cracked down on the media. The government has banned protests by Bersih (which means ‘clean’ in Malay), a movement formed in 2007 to push for fairer elections. The powerful sultans in the country’s nine states have also broken their silence and their non-political stance to call for a swift investigation into 1MBD.

Low added that the Malaysian government is “hopeful in bringing about change and a cleaner business environment” through CSR not only in Malaysia but in ASEAN. He cited the establishment of the Business Integrity Alliance, a pipeline project that will bring tools and best practices to enterprises.

“Malaysia is in the ASEAN, and being part of the region that wants to help other member states, the key is to gather collective action to implement what must be implemented. Weak governance fuels corruption, and you cannot resolve corruption unless society is also willing to commit itself to it,” Low said in his speech.

He said his country aims to create an “integrity movement” and will implement the anti-bribery management system International Standard Organization (ISO) 37001, once it is finalised. An anti-corruption coalition is working in the construction sector and will eventually be replicated in sectors such as medical devices, pharmaceuticals, among others.

But how effective can standards and rules be was also debated, amid discussion that the values of responsible business included integrity and ethics at the individual level as well, linked to education, and governance, among others.

Several pointed out that problems with corruption are by no means limited to developing economies or small companies.

Most big corruption cases involve “government and the private sector on both sides of the equation – government on the demand side and the private sector on the supply side,” said Jose Cortez, executive director of Integrity Initiative, a private-led effort to promote good governance, transparent business transactions and implement strict integrity standards in the Philippines.

Jermyn Brooks, chair of business advisory board of Transparency International, said “prison and blacklisting” have been tested to help stave off corruption, and governments and the private sector that experience these have learned not to conduct business “in the dark and under the table.”

One workshop at the conference cited the bribery scandals involving Siemens, Europe’s largest engineering company, which, from the mid-1990s until 2006, was found guilty in multi-country investigations of having paid kickbacks and bribes to win contracts from Iraq’s government in the United Nations oil-for-food programme, for projects including the commuter rail system in Venezuela, mobile phone networks in Bangladesh, power plants in Israel and traffic control systems in Russia.

The biggest case involved bribery of up to 100 million euros between Siemens and Greek government officials to allow the German firm to win contracts for the 2004 Summer Olympic Games in Athens. The investigations resulted in Siemens AG pleading guilty to violating US anti-corruption laws and having to pay up to 1.6 billion euros in settlements and penalties.

The Siemens case showed the world the commonness of bribery and its being part of the standard operating procedure in doing business worldwide, be they companies as large as Siemens or small enterprises in communities, stressed Francesco Checchi, regional anti-corruption adviser for Southeast Asia and the Pacific of the UN Office on Drugs and Crime (UNODC).

“That bribery, corruption and cheating is as common as our efforts to prevent them and totally do away with the practice is what brings us to always say that integrity has no borders – and the call for it is difficult,” he said.

But the Siemens case, he added, helped hasten deliberations on the United Nations Convention against Corruption (UNCAC), an international instrument against corruption that entered into force in 2005. He added that Siemens, which shouldered the biggest financial penalties for corruption, continues to pay for what it did because it was required to establish worldwide projects on corporate reform.

Paul Rennie, British Deputy High Commissioner to Malaysia, cited as another example of an anti-corruption mechanism Britain’s Bribery Act of 2010, which is one of the toughest international regulations in the world to prevent bribery in international operations. It replaced similar previous laws with the crimes of bribery, being bribed, the bribery of foreign public officials, and the failure of a commercial organisation to prevent bribery on its behalf.

“Many lost their businesses when the Act came out, but others gained reputational benefits, painfully and slowly. This means you can’t cheat and make shortcuts forever because you have a reputation to uphold before your employees, partners and investors,” he said. “Reducing bribery reduces corruption.”

Said Hew Chooi Yoke, senior executive director of PricewaterhouseCoopers Malaysia: “It is important for the world now to learn and implement policies that create a culture of integrity in business.”  (END/RA-IPSAP/DGM/JS)

(*This story is part of series of articles focusing on CSR and responsible business issues in ASEAN, and part of the larger Reporting ASEAN: 2015 and Beyond series.)