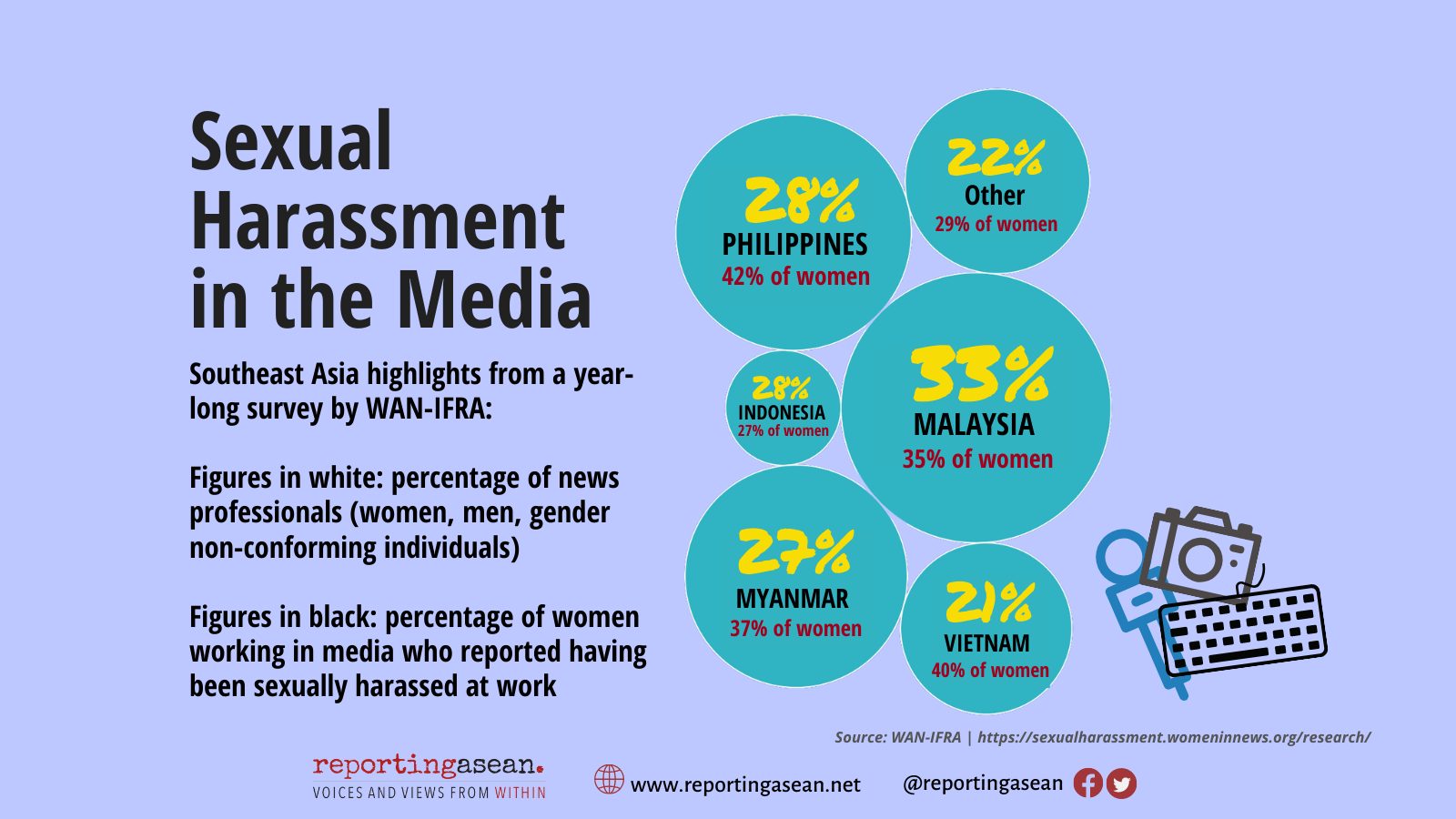 Just over 84% of news executives in Southeast Asia believe that sexual harassment is not a problem in the industry. Yet one in five media professionals in the region say they have experienced sexual harassment in their work settings — and less than one in six cases are reported to management.

These, along with the fact that women are much more likely than men to experience verbal or physical forms of sexual harassment, are among the takeaways from a year-long survey conducted by the World Association of Newspapers (WAN-IFRA), the trade organization for news publishers, along with the City University of London.

The survey sheds light into a problem that we know exists but do not always know the details of, including how sexual harassment is understood, reported, and whether and how, newsrooms, address it. Survey findings, from data gathered from September 2020 and November 2021, were released in January.

The 494 respondents from Southeast Asia (54.4% women, 44.7% men and .8% gender non-conforming persons) made up nearly a fourth of the 2,005 survey respondents across 20 countries in five regions of the world.

WAN-IFRA calls it “the largest (study) of its kind” that focuses on sexual harassment in newsrooms.

Findings from the Southeast Asian countries of Indonesia, Malaysia, Myanmar, the Philippines and Vietnam point to the challenges that lie in what WAN-IFRA’s Women in Media programme calls “significant underreporting that allows sexual harassment to persist in media organisations”.

“The way media organisations are managed is, generally, influenced by a belief that employees know how to behave,” said WAN-IFRA’s analysis of the survey results. “However, the reality is that sexual harassment remains quite prevalent – particularly for women – and often goes unreported. With less than one in six cases being reported to management, a culture of silence and fear persists.”

“This is a significant perception gap,” the same summary said, referring to the contrast between news executives’ view that sexual harassment is no longer a problem in the industry and the fact that one in three women report having faced sexual harassment at work.

Although 21% of media professionals of different genders say they have faced sexual harassment at work, 84.1% of Southeast Asian media executives who were interviewed believe that it is no longer a problem in the news industry.

Almost one in five among the interviewed executives (10 women, 9 men) have in fact been the target of harassment – and none of the managers had reported the issue.

At the same time, more than half of the 85 executives in the global survey called for more training on what constitutes sexual harassment and how to respond.

As big an issue as sexual harassment itself is whether, and how newsrooms view and handle it. Gender and rights issues are typical news topics that many media houses follow, which then raises the question of how they integrate these issues into their organisational and professional norms.

“Underreporting of sexual harassment is endemic at both the employee and executive level,” WAN-IFRA pointed out its summary for Southeast Asia.

“It seems that a certain amount of sleaziness is expected from government ministers in Malaysia,” one reporter-respondent said in the survey. “The one who asked me for my phone number and made me feel so uncomfortable that I hid in the closet until he and his entourage had left was notorious.”

Among Southeast Asian women, men and those who identified as gender non-conforming and had experienced sexual harassment, 16.3% said they reported the incident and 56% said action had been taken on their cases. A total of 41.1% said the perpetrator was “warned”, followed by 22% who said “I was provided support.”

An average of 79.2% of women respondents in the region said they never reported the sexual harassment they went through.

Moreover, global respondents “overwhelmingly said no” when asked if they have a sexual harassment policy, Molly Chimhanda, senior manager in WAN-IFRA’s Women in News, said in replies to emailed questions.

She added that 45% of respondents said they had not heard of such a policy in their media office, and that 19% said they had heard of one but had not gotten any training on this.

Perhaps the big hindrance to reporting lies in the fact that on average, it was “fellow employees” who harassed women in 33.8% of cases in the region, but 18.1% of the time they were members of higher management and in 12.4% of cases, direct supervisors, the WAN-IFRA brief added.

News sources were cited by 17.7% of Southeast Asian news professionals as perpetrators. “It seems that a certain amount of sleaziness is expected from government ministers in Malaysia,” one reporter-respondent from the region said, in a sample response provided by WAN-IFRA to Reporting ASEAN. “The one who asked me for my phone number and made me feel so uncomfortable that I hid in the closet until he and his entourage had left was notorious.”

In the survey, the highest percentage of women respondents identifying news sources as their harassers came from the Philippines (29.5%).

Out of 11 reasons they were asked to choose from, on why they did not report sexual harassment incidents, 16.3% of women professionals from Southeast Asian media selected “no evidence”, followed by 15.4% who “didn’t want to be labelled” and 12.8% who selected the reply “afraid I wouldn’t be believed”. Twelve percent said there were “no reporting mechanisms” available, and 10.2% said they “didn’t how to report.”

“Most of the victims decide to keep their experiences to themselves,” said another response from a reporter that was shared by WAN-IFRA. “They are too embarrassed to share details about sexual harassment with management.”

Filipino respondents’ views differed somewhat from other countries’, with 20.7% of women saying they did not report the incident because it “was not a big deal.”

A total of 83.4% of Myanmar women respondents said action has been taken on the cases they reported to news executives. Only 16.7% said action was “never” taken compared, to the highest prevalence in Southeast Asia of 62.5% in the Philippines.

Chimhanda said the Myanmar figure on action taken on sexual harassment cases could be coincidental or due to the particular situations of the respondents and their offices, but “what remains glaring is that the action taken remains as a warning”. She added: “This was consistent across 5 regions: an inadequate response rate on behalf of organisations upon receiving a complaint.”

The data around various aspects of the sexual harassment issue stand out even more against the backdrop that although Southeast Asia had the lowest prevalence of sexual harassment (21%) among five regions in the global data set, women there were more likely than men to experience harassment in news work.

“Despite having the lowest prevalence, the likelihood of women experiencing verbal/physical harassment was higher (in Southeast Asia),” said Chimhanda.

The difference between the percentages of women and men in the news industry who experienced harassment averaged 29.62 percentage points, the biggest gap being in the Philippines (42.1%) and the smallest at 18.7% in Malaysia.

“This research has provided evidence of the need for media organisations to recognise the extent of sexual harassment and put in plans steps to provide a safer working environment,” the WAN-IFRA summary said.

WAN-IFRA defines sexual harassment as “unwanted and offensive behaviour of a sexual nature that violates a person’s dignity and makes them feel degraded, humiliated, intimidated or threatened.”