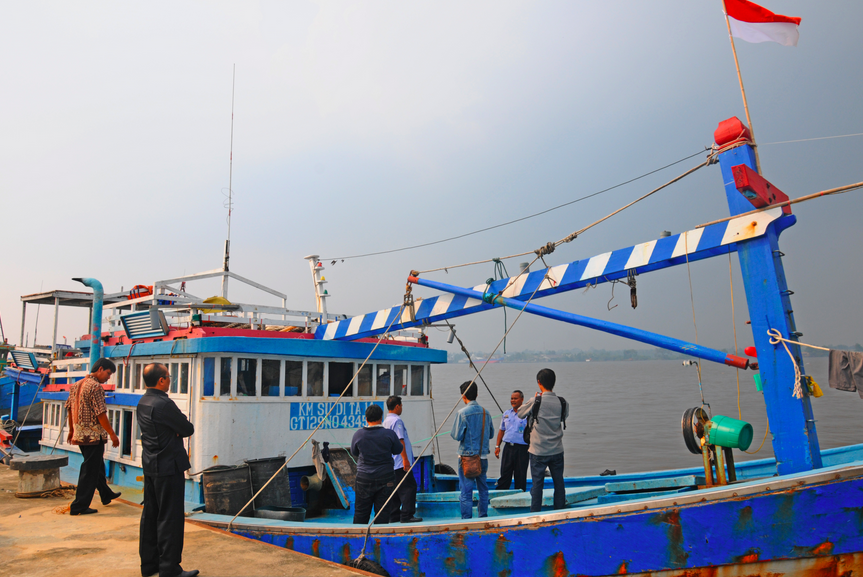 Fisherman say they need to go farther out to try for better catch. Photo: Heriyanto

SUNGAI KAKAP, West Kalimantan, Indonesia, Nov 26 (IPS Asia-Pacific) – Morning, approximately three o’clock. Dozens of boats are docked at Sungai Kakap, Kubu Raya District, West Kalimantan province. The dock is beginning to buzz with activity. A boat is unloading its catch. One by one, large fish are removed from the storage in the vessel’s hull and hauled into a shed close to the boat.

Thamrin, one of the boat’s crew, is visibly getting tired lifting one big fish after another. In the shed, the fish are stacked and drenched with water. “This is a month’s catch,” says Thamrin as he drags a stingray.

Boats that are about 16 metres long and four metres wide have a crew of two. That is the case with the boat Harapan Jaya, which has Rusli at the helm and Thamrin as the other crewmember. They have just spent a month in the Natuna Sea at the Riau Islands. Rusli says that in the past, it was easy to have a decent catch in nearby areas. But the fish in their old spots have been declining in number, and they have had to look for new places to fish. One of their fairly new favourite spots is in the Natuna Sea. “The location is quite far,” says Rusli. “Natuna Sea from Pontianak takes three days.”

The distance means they cannot go back to Pontianak until they have a sufficient catch. “We’re also factoring in the fuel cost,” Rusli says. “If we cannot catch a lot of fish, we will have to take a loss.”

And so they stay out at sea for a month each time. Whenever it gets too boring, they visit a nearby island for two or three days. While there, they try to find ice cubes they will use to preserve the fish. With their catch bound to be stored for quite a while before they head home, they need to keep it from spoiling.

“This is the fisher’s world,” says Thamrin. “We go out to sea for a month. We get paid and bring home the money. But it’s soon exhausted, so we set sail again.”

It’s an experience shared by many other Indonesian fishers. Muhammad Riza Damanik, executive director of the People’s Coalition for Fisheries Justice (KIARA) that works on issues concerning fishers and people living in coastal areas and small islands, says that when talking about Indonesian waters, two things usually come up: safety and prosperity. Yet while the latter is possible with the bountiful resources of the country’s seas and a continuous demand for fish in both domestic and foreign markets, it seems out of reach for many of the country’s fishers. In fact, far too many of them are poor, and Riza says this is evident from the fact that most of the people on the coast are impoverished. Of the 16.42 million Indonesians living in coastal areas, 32 percent fall below the poverty line.

Sadri, chief of the Fishing Technology Studies Programme at State Politeknik of Pontianak, confirms that fishers in West Kalimantan fall under the middle to lower economic levels. And those who are poor are usually unable to get out of their financial rut.

Sadri says many fishers remain poor because they still use traditional boats and they are forced to compete with illegal fishers from countries such as Thailand and Vietnam who use larger, modern vessels. “Their ships use better technology so our fishers often lose against them,” says Sadri.

Of course there are also big boats available locally. But Sadri says local fishers usually do not get these because of the cost. “To operate such boats would take quite a bit of fuel,” he says. “Usually fishers do not have enough money so they borrow from investors.”

Sometimes even those who have big boats find themselves lacking money to set sail. “In fact there are some boats that were sold,” Sadri says. “Or the engine was sold.”

Yet even out there, fishing boat owner Lee Siang says the average catch nowadays is much smaller than what it was a dozen years ago. He says it’s because local fishing boats usually lose fish to the larger, better-equipped vessels of illegal fishers from other countries.

To make matters worse, many of these illegal fishers pose a threat to the fish stock in the high seas. According to Yudi Gusworo of the Marine Resources and Fisheries (PSDKP), many of the illegal fishers use bottom trawlers that damage coral reefs and destroy many other things in their way, including fish.

That spells even more trouble for Indonesian fishers, who are already hard-pressed in dealing with higher expenditures as they sail farther from shore. Big overheads cut into profits. Diesel fuel alone already takes a huge chunk of a fishing boat’s budget – that is, if there is any available. Says Lee Siang: “It’s hard to find diesel fuel. Fishers complain a lot. The government does not provide enough fuel. If there is no diesel fuel, we cannot set sail.”

Here’s another reason why local fishers remain poor: Because many local fishers do not have enough cash in order to go out to sea, they turn to either loan sharks or ‘investors’ to whom they are bound to sell their catch. The price they get then for their fish may not reflect its real value because it is the ‘investor’ who determines this. The set-up affects the ability of even those who have no debt to get the price they want for their fish because it has become a buyer’s market. The situation has become so bad most fish auctions no longer take place, such the one that used to be held at a hall by Sungai Rengas.

But Rusli and Thamrin are still too busy with their latest haul to think about this. Indeed, it’s hardly the end of the line yet for their catch. Because the fish had been kept in storage for some time, they now have to be cleaned as soon as possible, cut into small pieces, and then put in salted water. After that bath, the cut pieces will be dried for three days. Since it was no longer fresh, the fish will be made into salted fish.

Although Rusli and Thamlin had difficulties out on sea, the waves had not been too high so they could spread the net safely. They had been after two types of fish: sharks and stingrays. The biggest among the sharks weighed as much as 31 kilogrammes, the stingrays 30 kilogrammes. They caught a total of two tonnes of sharks and stingrays, and that makes for quite a decent month’s catch these days.