Home » Features » Reintegration: the Forgotten Side of Migration in ASEAN 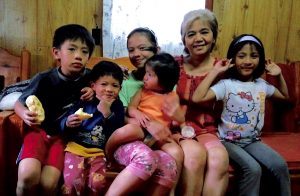 Marilyn with her grandchildren in Baguio City. Photo: Tess Bacalla

MANILA, Apr 29 (Reporting ASEAN) — Marilyn Sakiwat, 55, looked forward to coming home to the Philippines for good after years of working overseas, making up for lost time with her now grown-up children, and becoming a productive member of her community.

This, after 26 years of toiling away in Hong Kong, hundreds of miles away from her simple home in the northern Philippine city of Baguio City, one that she now shares with two of her five children, both married, and grandchildren.

But barely two months after returning to the Philippines in December 2015, anxiety began to grip Sakiwat. Her meagre savings were running out and there was no stable means of livelihood in sight despite her efforts to earn money from cultivating mushrooms.

Like many migrant workers, she came home with new, enhanced skills that were honed in the offshore homes where she had served as a domestic worker.

She had hoped to set up a small business using her new culinary skill — making pasta — after returning to her home country. Yet she lacks the resources to buy the needed equipment and get started on her entrepreneurial venture, she said with uncertainty in her voice.

Sakiwat’s case is far from uncommon among returning migrant workers in labour-sending countries like the Philippines, about 10 percent of whose 100 million people live or work overseas. Armed with new skills, they struggle to apply these back in their home countries but are challenged by lack of capital and access to other resources, and the absence of sustainable reintegration policies and programmes that could enable them to put their skills to profitable use.

“The biggest problem with reintegration of migrants in ASEAN is that governments don’t really understand what’s involved, and primarily think that such programs are all about finding a way to steer workers’ remittances towards government priorities and programmes,” Phil Robertson, deputy director of the Asia division of Human Rights Watch, said in an email interview.

In this sense, they can be “social and economic change agents in their communities if systematic policies and procedures are in place at the national level to ensure their successful reintegration into purposeful employment or self-employment,” added a concept note by the two UN agencies.

The joint concept note was prepared by the ILO and UN Women for an October 2014 workshop on social and economic reintegration of returning women migrants, organised by the Canada-funded Tripartite Action for the Protection and Promotion of the Rights of Migrant Workers in ASEAN Region (ASEAN TRIANGLE Project).

Often, the focus on migration in South-east Asia is on labour exports, specifically the departure and deployment process, the challenges of protecting migrant workers overseas, and their remittances to their home countries. Governments pay much less attention to their nationals after they go back home, and national and regional policies for their successful reintegration are conspicuously missing.

Yet ASEAN is in the process of deepening integration among its member countries. Launched in December 2015, the ASEAN Community aims to bring ASEAN countries and societies closer in economic, socio-cultural and political terms.

But it has done little to address unskilled and low-skilled migration that makes up the bulk of migration for work in this region of 620 million people, according to the Asian Development Bank.

In 2007, ASEAN leaders made a commitment to protect and promote the rights of the migrant workforce, but they have yet to put in place the laws to implement this given the political sensitivity of the issue among labour-sending ASEAN countries.

Of the three phases of the migration cycle – pre-departure, in-country and reintegration – it is the last one that is the least developed, said the Manila-based Centre for Migrant Advocacy. This is true both of labour-sending and -receiving states such as the Philippines, Indonesia and most Mekong countries on one side, and Singapore and Malaysia on the other.

“In many countries of origin and destination, return and reintegration is that part of the migration cycle that is not often subject to policy or programmatic interventions,” said the ILO-UN Women concept note.

Discussions of reintegration in ASEAN are often confined to issues of trafficking, said Reiko Harima, regional director of the Hongkong-based Mekong Migrant Network, which has engaged with the regional association on migrant workers’ issues.

It does not help that since ASEAN leaders signed the ASEAN Declaration on the Protection and Promotion of the Rights of Migrant Workers in 2007, the legally binding instrument that would give flesh to its provisions remains a mere aspiration. One such provision involves the reintegration of migrant labour.

This lack of progress reflects ASEAN’s inability to address the issue of unskilled, low and medium-skilled migrants. In fact, the ASEAN Community, specifically its economic pillar called the ASEAN Economic Community, excludes migrant workers from its blueprints to turn ASEAN into a single market and production base. It eases the migration of eight types of skilled professionals, such as doctors, but is silent on unskilled and lower-skilled workers.

The Philippines has the most developed policy and programmes for returning migrant workers among ASEAN countries, said Robertson. This is because its labour exports started in 1974, when workers began getting jobs abroad to escape hard times at home.

But how well the Philippines’ reintegration programmes have worked is unclear. The Centre for Migrant Advocacy says there is a need to expand them and ensure the inclusion of all migrant workers, regardless of skills.

A 2012 study by the ILO, titled ‘The Philippines and Return Migration: Rapid appraisal of the Return and Reintegration Policies and Service Delivery’, confirms this assessment: “(R)eturning workers have been of less concern to the (Philippine) Government over the years. For the longest time, the Philippine reintegration services were the weakest component in the Government’s overseas employment programme.”

In the Mekong region, “Laos, Cambodia, Vietnam and Myanmar have done little or nothing for their migrant workers, and do little for them when they are overseas or when they return,” said Robertson.

For instance, many returned Cambodian migrant workers who suffered sexual and physical abuse in Malaysia, a major migrant destination, find themselves in difficult situations but get little support from the government or their communities.

“News reports have found some of these women shackled inside the house by their families to stop the women from destructive behaviour arising from untreated trauma they faced in Malaysia,” Robertson explained. Other returning migrants, like those in Laos and Vietnam, become targets of corrupt officials, he added.

Among Mekong countries, said Harima, even more important than the provision of reintegration services is the formulation and enforcement of sound, effective policies that boost economic growth and create jobs in order to draw overseas workers back home.

Harima recounted that some 220,000 migrant labourers from countries like Cambodia fled Thailand in the wake of the 2014 coup d’état, only to leave again two weeks later, when the political situation in their host country had stabilised. Eager to resume work in Thailand, they were wiling to endure exploitative conditions given the dire economic situation back home.

Still and all, a line must be drawn between voluntary and forced migration that arises from the lack of viable livelihoods at home. This highlights the need for migration policies and programmes, within countries and across the region, that facilitate the effective return and reintegration of migrant workers.

But although ASEAN could address cross-border migration issues, if it had more political will to do so, it has had “very, very little or limited impact on migration,” let alone reintegration, Harima said.

Likewise, while the ASEAN declaration on migrant workers puts the responsibility for ensuring the well-being of returning migrant workers squarely at the doorstep of labour-sending countries, labour and rights advocates say that labour-exporting countries have a role to play as well.

The ASEAN declaration itself says that states must “set up policies and procedures to facilitate aspects of migration of workers, including recruitment, preparation for deployment overseas and protection of the migrant workers when abroad as well as repatriation and reintegration to the countries of origin. ASEAN states committed to “facilitate access to resources and remedies through information, training and education …” to prepare migrant labour for their return to their countries of origin.

“But there is as yet no progress in developing ASEAN (regionwide) guidelines on effective return and reintegration agreements among the ASEAN members,” noted ‘Asia on the Move: The Role of Regional Migration and the Role of Civil Society’, a book published by the Japan Centre for International Exchange in 2015.

Jolovan Wham, executive director of the Humanitarian Organisation for Migration Economics (HOME), a non-government organisation assisting vulnerable foreign migrant workers in Singapore, does not believe destination countries such as his city-state are interested, let alone concerned about, reintegration.

He said it would not be surprising if the Singapore government asks: What is the Philippine government, or other labour-sending countries, doing about it? If they are not doing enough, why should we even be concerned?

Most labour-receiving countries act as if all their responsibilities for a migrant worker end the minute the person leaves the country, said Robertson of Human Rights Watch. “When labour-sending states are doing very little to help reintegrate their own citizens who have come back from working overseas, it becomes quite hard to argue that labour-receiving states should do that work,” said Robertson.

Each ASEAN member state is “on a different trajectory politically and economically”, Wham explained, so it is hard to see a regional response emerging on touchy issue of migration. “So it makes more sense to pursue bilateral arrangements,” he said.

But even these do not hold out much hope. The ASEAN People’s Forum, comprising civil society groups in the region, has noted “the power imbalances in negotiating bilateral agreement between sending and receiving countries.” 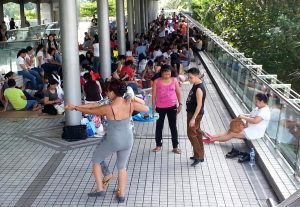 Domestic workers on their day off at the Central Elevated Walkway in Hong Kong. Photo: Tess Bacalla

The ILO and UN Women are pushing for a two-pronged approach to migration policy — one where countries of origin (like the Philippines, Indonesia, Cambodia, Laos and Myanmar) and destination states (such as Malaysia and Singapore) work together to find solutions.

The two UN organisations have jointly recommended that countries of origin and destination develop programmes on-site to “support women and men migrant workers towards their return and reintegration”.

Their 2014 ASEAN TRIANGLE-organised workshop, held in Nepal, recommended that on-site support services include the provision of multilingual information and materials, including seminars, both post-arrival and pre-return, on preparations for livelihood or business strategy development and financial literacy.

It proposed the creation of a migrant worker database listing the skills that workers acquired overseas, to prepare them for local employment or further overseas employment.

But there are few signs that ASEAN will focus anytime soon on returning migrant workers, since it has been averse to addressing labour issues beyond those of skilled professionals.

Already, it has been seven years since the Task Force on ASEAN Migrant Workers, which comprised civil society groups, submitted to the ASEAN Secretariat a draft ASEAN framework instrument on the protection and promotion of migrant workers’ rights. The draft calls on ASEAN governments “to develop a coherent policy framework on socio-economic reintegration” of workers, and ensure that development policies “truly reflect the interests of returning workers”.

Said Robertson: “What ASEAN and its member states should be discussing is what sort of services returning migrants truly need, and how to ensure support for children and elder family members left behind while the migrant is away overseas, earning money.” (END/Reporting ASEAN)