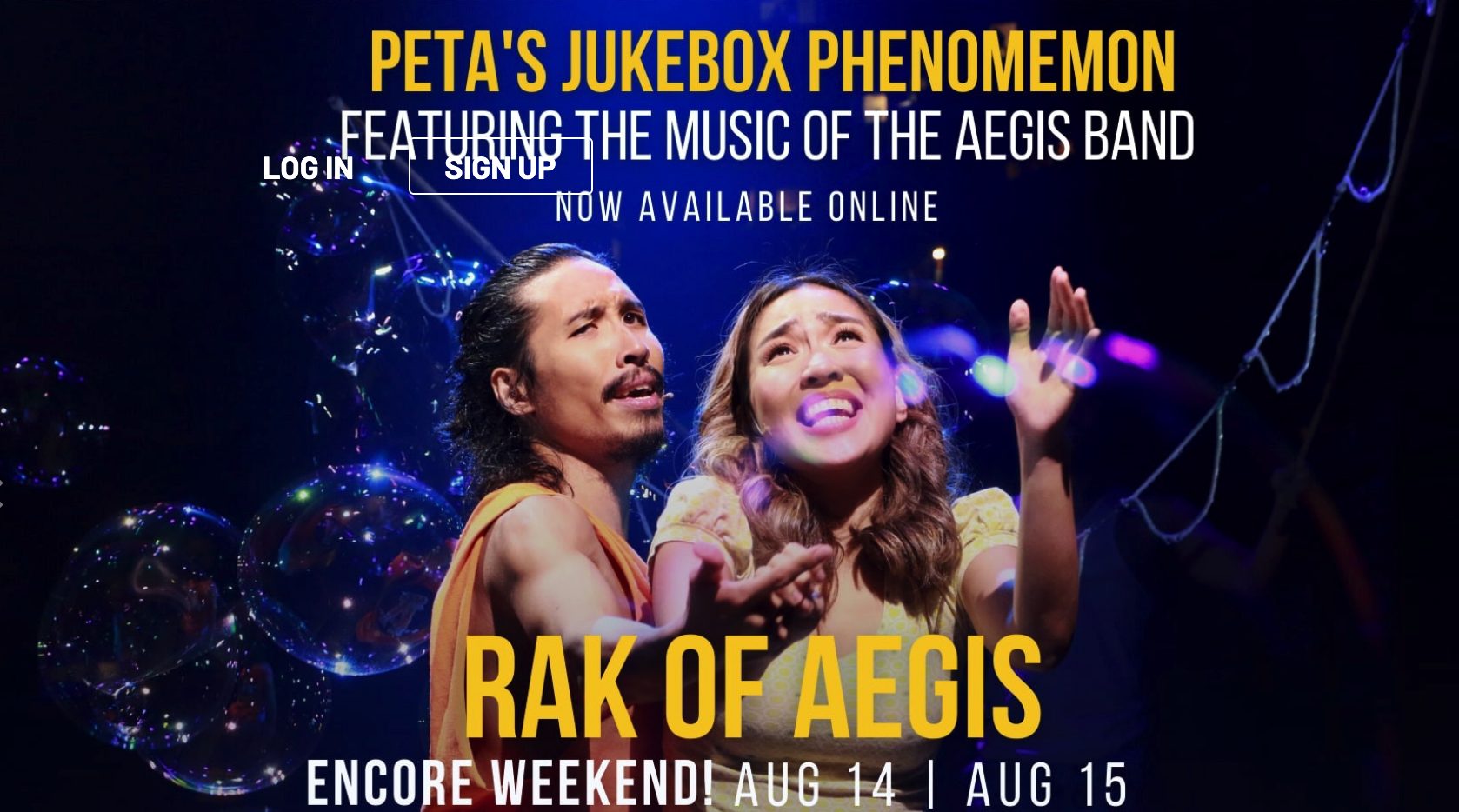 “Na-last song syndrome ako!’ (I came down with the last song syndrome!) I laughed to my friend Lea, an artist with the Philippine Educational Theatre Association (PETA), after watching the musical ‘Rak of Aegis’ online. Its theme song wafted around me for two whole days – ‘Eto akoooo, basang basa sa ulan, walang masisilungan, walang malalapitan. . .’  (Here I am, soaked in the rain, no shelter to run to, no one to turn to.)

But this signature song by the Filipino rock band Aegis – which ties together woe, rediscovery of self and resilience – was far from the only thing that stayed with me from the hit PETA musical after I watched it on Aug 7.

Various parts of the script jumped out at me, acquiring new meanings that formed new layers over the musical’s original storyline – how the stinking, unyielding flood around the poor community called Venizia disrupted the lives and livelihood, health, human rights, relationships of its residents, and how decency and inner fortitude led them out of this, well, muck.

But it was another kind of muck that Venizia’s floods had my thoughts immersed in: COVID-19 and the question of how we human beings are going to live from hereon. Here are four takeaways from the 2021 online run of ‘Rak of Aegis’:

1 The musical’s flood setting can be seen as a symbol for COVID-19 and other challenges we find ourselves mired in.

The flood around Barangay Venizia felt like a symbol for the deluge of ills popping up in our midst.

At the top of the list is COVID-19, but also climate change and plastics pollution, all of which are the impact of human activity – and how human beings live like the planet exists for them to conquer, instead of co-habitating in it with other living things. Like the flood around Venizia, COVID-19 and other ills exempt no one.

2 Time is running out.

When Kiel (played by ‘Miss Saigon’ veteran Robert Seña) pressed his neighbours in Venizia to think about when they were going to take action to get the floodwaters around them drained so they could get their home environment back, it sounded almost like a loaded query about the state of our out-of-whack planet today. Are we going to wait till we’re all sick before we do something? he wanted to know.

That question brought today’s headlines to mind – wildfires in North America and Europe, record floods in Germany, the continuing retreat of glaciers and rise in sea levels. In its latest climate report on Aug 9, the United Nations’ Intergovernmental Panel (IPCC) says

the Earth is warmer than it has been in 125,000 years due to human activity and that rapid, major action is needed to ease some of the effects of global warming already underway.

The floods as the musical’s setting provide context that is worth pressing the ‘rewind button for. The year 2014, when ‘Rak of Aegis’ first opened, was not long after Typhoon Haiyan, one of the strongest tropical cyclones ever recorded with winds of over 313 kilometers per hour, roared through the Philippines in November 2013. Some 6,300 people died.

So, yes, continuous rain or storm warnings make Filipinos jittery, because floods mean destruction and death. Looking back, Haiyan seems to have been a sample of extreme weather events we have been seeing more of.

It was another kind of muck that the floods in the Venizia community, which is the hit musical’s setting, immersed my thoughts in: COVID-19 and the question of how we human beings are going to live from hereon.

3 The worst situations can bring out the best, or the worst in us, or both.

The flooded Venizia community found itself debating tough questions: Can we find a solution to our problem by profiting from this disaster around us? Can we use our misery as capital? Do we really have a choice? Residents later figure out that going low does not take them anywhere, but that taking the high road itself becomes the path to survival and more.

Uncomfortable questions have also been thrown up by the COVID-19 upheaval. Countries closed borders, rich nations have taken most of the vaccines. But we have also seen examples of compassion, kindness and sharing, many times over.

4 The show oozes with that Filipino touch, whether in jokes, cheesy romantic twists – or songs that draw from a seemingly bottomless well of torment and tragedy, as well as their flip side, hope and humour. But while it is enduringly Pinoy, it is also so, so universal.

There were also puns galore, starting with the name ‘Venizia’ – a nod to Venice and its scenic canals. (Even that has changed, because Venice saw record floods in 2019 that its mayor attributed to climate change.)

And in case you were wondering, the title ‘Rak of Aegis’ is a play on ‘Rock of Ages’, the Broadway jukebox musical.‘Rak of Aegis’ adapts and uses Aegis’ songs and karaoke hits.

But explaining the Pinoy markers through the 2.5-hour musical may need some cultural translation – why it’s a basketball team (and not soccer) that shows up, and why the lead character is – how can it be anything else – a belter who dreams of her YouTube clip becoming viral and being flown to the United States by television host Ellen DeGeneres. Fantasy? Think again, because this story has happened to Filipino talents before.

*Johanna Son is the Bangkok-based founder/editor of the Reporting ASEAN series. Watching ‘Rak of Aegis’ brought her home to the Philippines — for a few hours, despite the pandemic.