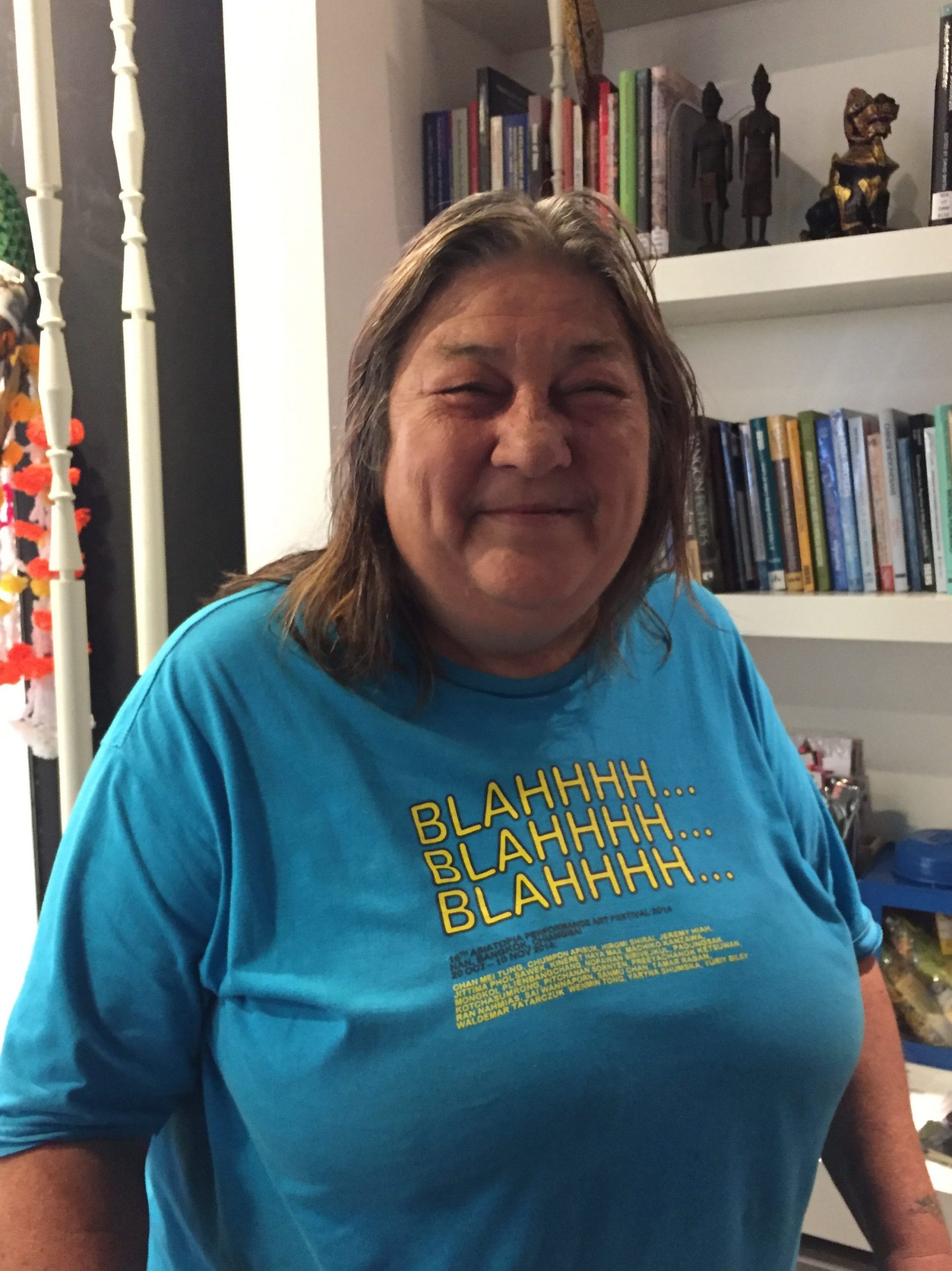 “Of course you don’t lose your human rights because you take a dollar for sex,” says Liz Hilton of Empower Foundation, a Bangkok-based organization that works with sex workers.

But making people and  governments understand this continues to be “the fight”, she explains, adding that many sex workers in Southeast Asia continue to be rounded up in raids, jailed, shamed or punished in other ways. 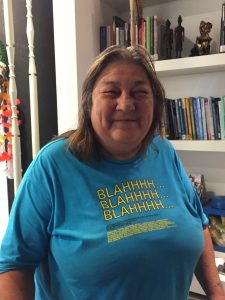 On its 32nd year this year, Empower was among the three recipients of awards as women human rights defenders given by the National Human Rights Commission of Thailand for International Women’s Day, 8 Mar. 2018.

In this chat with Reporting ASEAN’s founder/editor Johanna Son a day before the awarding ceremony in the Thai capital, Hilton discusses – with a generous touch of joviality at times and irony at others but all in total seriousness – how Southeast Asian societies stick to duality in dealing with sex work: shutting one eye when convenient, or condemning it during the day but accepting it during the night.

In ASEAN, sex work remains illegal in all except one country, Singapore. Since 2012, given greater integration within ASEAN, Empower has been working with sex workers’ groups in nine member countries (except Brunei), plus Timor-Leste. These groups have also taken part in the people’s forums around ASEAN meetings, and followed ASEAN discussions on migrant workers, trafficking, and human rights. They have also held a sex workers’ summit called ‘Sex Workers of ASEAN Summit’ or SW-ASEAN.

“I think most societies everywhere have two faces when it comes to women and sex,” says Hilton, who is from Australia and has been with Empower for 26 years.

Reporting ASEAN: How would you characterize being a sex worker in an ASEAN country these days?

Hilton: Really, if you ask any sex worker in ASEAN or the rest of the world, what are the two biggest issues the sex workers face, they will all answer the same – the police and stigma. These are the two big issues.

Reporting ASEAN: If women are choosing to go into this, how can they be empowered as such, given that sex work is not even recognized as work?

Reporting ASEAN: But this is not a norm – yet?

Reporting ASEAN: Is there something particular about a society in ASEAN when it comes to understanding, at the very least, the rights aspect of sex work?

Hilton: What I think is for women in ASEAN, what is different is the women’s responsibility to provide for the family in ASEAN, especially Mekong countries – Vietnam, Laos, Burma, Thailand, Cambodia. The eldest unattached daughter has a responsibility to look after the other siblings, her parents. . . . I don’t know in comparison with other places, but I think in the daytime, no one can accept sex work, but in the nighttime when all the politicians come around, everyone accepts this! Government workers, police, all these people are good customers across ASEAN.

Reporting ASEAN: Why is that?

Hilton: Why do they do that? I think you have to interview them, I don’t know (laughs). I know what it means for women who’re doing sex work. It means they are expected to work to provide for their families, they’re expected to do a good job to look after their customers, but at the same time they’re not accepted and made invisible – and punished. I think most societies everywhere have two faces when it comes to women and sex.

Hilton: It’s very funny across our region. You have the whole fruit salad – we have (laws that make sex work) illegal, we have legal and then we have not illegal, but against religious law.

Singapore is the only country in ASEAN that has a legalized system. So that doesn’t mean that women are in control of their own work. It doesn’t mean good conditions. It means that the government controls the sex work. So you have to register; there are many rules that you have to do. (In) Thailand, Burma, Cambodia, Laos, it’s illegal; it’s criminalized. Legal in Singapore, illegal in five countries. Our friends in Malaysia – actually there is no law specifically about prostitution, but it’s illegal under the religious laws to be having sex with someone you’re not married to. In the Philippines, it’s illegal. Across the world, it’s 116 countries where it is illegal. 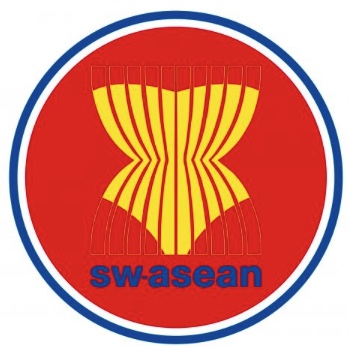 Logo of the Sex Workers of ASEAN summit in 2012, attributed to Empower

Reporting ASEAN: In Empower’s work in ASEAN countries as a unit, what are your goals?

Hilton: Empower is now 32 years old; that’s a long time, no? Nobody meant to start anything; it was just a group of women getting together, as we do. The goal is really for women to be able to work safely and fairly, in whatever work they do, including whether that is prostitution or not, in the home or not, across the board. If you ask the women what do you want, women will say ‘we want to be able to look after our families and we want acceptance by society, and have a better life’. We’ve broken that down to mean, over the years, they need to stop being treated as criminals; there is no need for criminal laws. They need to be protected under the labor law framework.

Most of the time in Thailand, most of the time and most of the work is done in a registered entertainment place. So your dancing, your playing snooker, your mixing drinks, your giving massage – these are not illegal things and not done in an illegal place. So why aren’t the workers protected by the labor law? Everybody’s so worried about the five minutes they are having sex, they forget about the seven hours they’re not having sex. . .

And in ASEAN, people have been moving across borders many years ago. . . they are moving a lot, so we want to the same rights and protection for migrant sex workers as would apply to the local sex workers. So they also need to be not criminal. They also need labor protection.

Reporting ASEAN: That’s probably harder, no? There is this talk of the ASEAN Community as one community, so where does this figure in issues related to sex work?

Hilton: I think that (one community) just meant the governments; I think we got it wrong. . . .

Hilton: And I don’t know why it has to be so hard. Nobody would cross if there was no work and if there is work, what’s the problem if people cross? The people doing bad things, they don’t have any problems crossing; they fly first class. They don’t even see the border.

Reporting ASEAN: The concept of ‘rights’ and attaching that to sex work – how much progress has been made in terms of the acceptance of these rights?

Hilton: I think, a lot. You say attaching rights to sex work, no? We’re attaching humanity to sex workers, saying these people are human. They’re mothers like us. So, of course you don’t lose your human rights because you take a dollar for sex. It wouldn’t make any sense, so of course you still have all your rights.

We don’t say rights to do sex work. There is no human right to do sex work, any more than there is a human right to be a journalist. But we say that you have to the right to be safe, to be treated with dignity and be respected under the law as an equal. We went to CEDAW (Commission on the Elimination of All Forms of Discrimination) last year and CEDAW gave us the recommendation to Thailand that they should stop criminalizing women, they should stop doing raids, they should put women under the labor law. So yes, the CEDAW committee of experts also agreed that sex workers must have these rights.

Reporting ASEAN: Now you’ve been given the human rights defender award by the National Human Rights Commission of a country where sex work is illegal? Is that an irony or what?

Reporting ASEAN: Have any of the laws around sex work changed in the last 10, 20 years?

Hilton: No. The law in Thailand last changed in 1996. It got better, a little bit better. Before it was three years’ detention and rehabilitation, now it’s a one thousand baht fine, which is not very much, or 30 days. In Vietnam, they’re looking at decriminalization. . . . Burma – they’ve got very old laws and they’re really looking at a whole lot of law reform, but the sex workers have been in Parliament talking about that.

I think there’s an acceptance in ASEAN that we have to do things in a new way – there’s just not an agreement on what the new way should be. Because it’s been criminalized and banned in Thailand since 1960 – 1960 the first time was this was criminalized.

Q: What’s the range of penalties like in ASEAN?

Hilton: Burma still has three to 15 years’ prison (for sex work). I don’t know that anyone’s getting that but people are getting three years. Vietnam – they did have mandatory long-term rehabilitation, three, four years but they closed those centers in 2011, I think. They closed all the centers and said no, we can’t do that. So they’re kind of in limbo. They aren’t sure what penalties to impose because they don’t want the old ones.

Reporting ASEAN: If you look at the 32 years of experience of Empower, Thailand has been kind of different, or ahead, or had more room for this kind of work than other countries. What has Empower’s experience taught it that it can share with other ASEAN countries?

Hilton: I’ve read a lot that people say that prostitution is illegal in Thailand but tolerated. It’s not actually true. It’s manipulated. So when nobody wants to see it, they shut one eye. But when it’s good to announce a crackdown or whatever, they shut the other. So, I think Thailand’s experience (is that) criminalizing sex work fails. It’s a spectacular failure to have any kind of prostitution law.

Reporting ASEAN: That’s the lesson from Thailand’s experience you mean?

Reporting ASEAN: You’re saying so that people don’t feel that they don’t need to get into sex work?

Hilton: Eradicate poverty because it’s the right thing to do. Then you say could we can start with that, and then maybe people won’t do sex work. We don’t know. Of course there are rich people doing sex work, but let’s see. I think the amount of money that our sex workers make for Thailand has never been reciprocated in terms of rights for sex workers and respect.

Reporting ASEAN: What does the award from the Thai human rights commission mean for Empower?

Hilton: For our sex workers, it’s a big statement that yes, it’s true, we do have rights. That sex workers are human beings, they are women with equal rights, and that calling for your rights and standing up for your friends and the rights of your friends, is not a bad thing to do. It’s not wrong. We’re not human wrongs, we’re human rights.