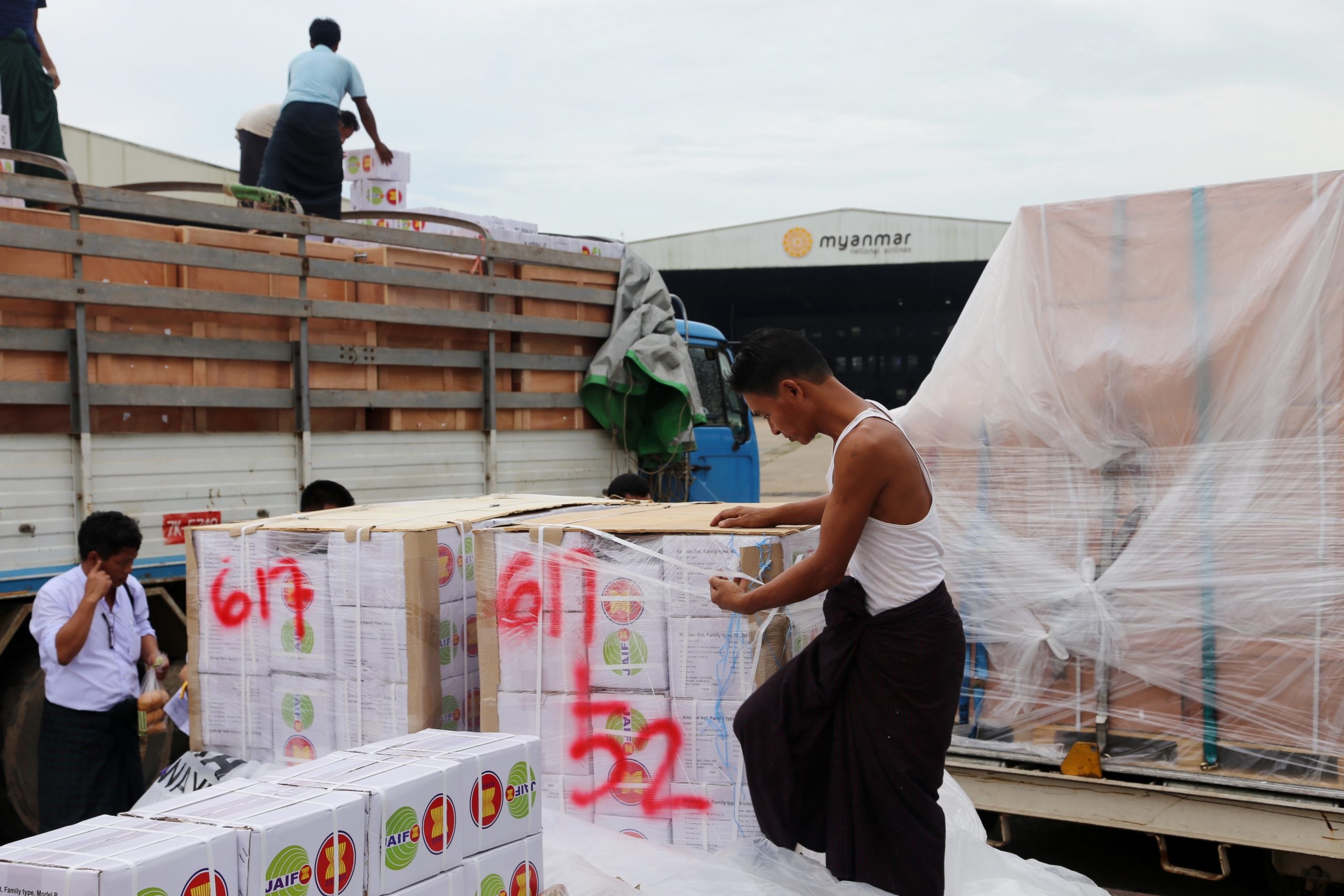 Home » Views and Points » Q &A: Disaster Aid with an ASEAN Touch

That ASEAN has a more nearly seven-year-old disaster assistance center, as well as emergency response teams, is not always known to Southeast Asians. The work of the ASEAN Coordinating Centre for Humanitarian Assistance (AHA Centre) also doesn’t always make the headlines, given that the news often gravitates toward larger and international initiatives such as those of United Nations agencies. But disaster assistance is among the pragmatic areas that ASEAN, for all its limitations, has been able to work on.

The Jakarta-based AHA Centre addresses both natural disasters and increasingly, human-made ones too, as well as supports ASEAN countries in preparedness for, capacity-building and resilience in dealing with them. More recently, it has provided humanitarian and relief assistance in relation to Myanmar’s Rakhine state, including in the wake of the 2017 exodus of mainly Rohingya people, and in the southern Philippine city of Marawi in early 2017. ASEAN teams have been allowed into Rakhine, which is otherwise an off-limits area.

ASEAN’s coordination made possible the entry of international assistance into Myanmar after Cyclone Nargis in 2008 through a mechanism that involved the Myanmar government, ASEAN and the United Nations. This played a major role in cultivating Myanmar’s comfort level with external assistance and in the process, helped nudge Myanmar, coming from decades of isolation, toward more openness. ASEAN’s emergency response team was deployed there for the first time in 2008. 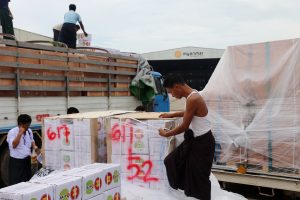 In this brief chat with Reporting ASEAN’s Johanna Son, the AHA Centre, through its communication officer Shintya Kurniawan, discusses its work and the ‘One ASEAN, One Response’ approach to ASEAN-style humanitarian assistance.

Q: How much value in assistance, and volume and type, has the AHA Centre given to Myanmar since 2017 to date, and from which ASEAN country did the resources come from?

AHA Centre: The AHA Centre has provided humanitarian assistance for the displaced population in (Myanmar’s) Rakhine State in two batches. The first batch was mobilized from the Disaster Emergency Logistics System for ASEAN (DELSA) regional stockpile in Subang, Malaysia in October 2017. The worth of relief items mobilized in October is over 440,000 USD, weighing about 80 tons. The DELSA system is a cooperative program between ASEAN and the Government of Japan. Later in December 2017, the AHA Centre also facilitated humanitarian assistance from the Government of Singapore to the displaced communities in Rakhine State. The locally procured items were worth about 75,000 USD.

In total, throughout 2017 the AHA Centre provided and facilitated the provision of ASEAN humanitarian assistance for the displaced population in Rakhine State that is worth about 515,000 USD in the forms of: In October 2017, 580 family tents, 1,200 family kits, 6,000 personal hygiene kits, 1,200 kitchen sets, two units of 16-KVA generators, two aluminium boats with engine and ancillaries, one unit of electricity distribution kit, two units of lighting equipment with generator 5 KVA; and in December 2017, 3,800 kitchen sets.

In addition, the AHA Centre also provided support in January 2018 through the deployment of ASEAN-Emergency Response and Assessment Team (ERAT) members.

Q: Would it be right to say that not all ASEAN countries pass their assistance through the AHA Center – but they can also do so bilaterally?

The AHA Centre also stands ready to assist the affected ASEAN country to facilitate the incoming international humanitarian assistance. We could provide manpower support through the deployment of ASEAN-ERAT members to conduct joint assessments or provide logistic support for the incoming humanitarian assistance. Staff of AHA Centre can also be deployed to the affected country to provide support to the National Disaster Management Organization of the affected country. In addition, we could also mobilize ASEAN relief items through our DELSA system. Every assistance that is provided by or through the AHA Centre is based on the request or approval of the affected Member State.

Since the establishment in November 2011, the AHA Centre has responded to 19 disasters, including earthquakes, floods, 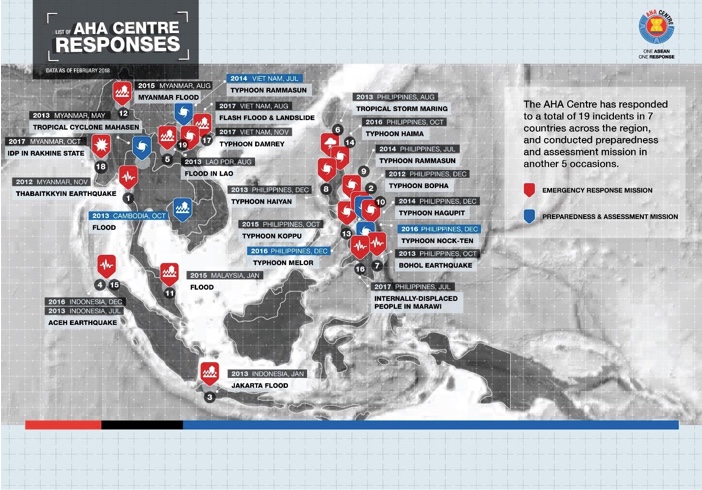 Q: Is it right that its assistance has been for distribution/use inside Rakhine State – AHA’s assistance is not for those who have left and are living in Bangladesh?

AHA Center: That is correct. The guidance given by the ASEAN Member States so far is to provide humanitarian assistance to displaced communities in Rakhine State, without discrimination. However, our assistance can also be allocated for those who may return from Bangladesh.

Q: The AHA Center usually deals with natural disasters, which appears to be its core mandate. How did its involvement happen in the Rakhine crisis and why was this done? Did this policy start with Marawi City?

AHA Center: Yes, although AHA Centre’s main mandate is to respond to humanitarian needs caused by natural disasters, on a case by case basis and based on the guidance of the ASEAN Member States, we provide assistance to the so-called human-inducted disasters. Any other types of disasters that AHA Centre will respond to human-induced disasters will be treated on a case-by-case basis, in close consultation with and with the agreement of the Governing Board of the AHA Centre. Our involvement in Rakhine and Marawi were focused to provide humanitarian assistance for the affected communities and address their urgent needs.

Q: What would make assistance that comes from ASEAN countries and/or through AHA Center – in the Rakhine crisis – different from say non-ASEAN or non-Asian sources?

AHA Centre: The unique characteristic of the assistance provided by the ASEAN community lies in the solidarity that is reflected in the spirit of One ASEAN, One Response. In September 2016, the Heads of State/Government of ASEAN Member States signed the ASEAN Declaration on One ASEAN, One Response: ASEAN Responding to Disasters as One in the Region and Outside the Region.

Q: Why does the AHA Centre have the ‘trust’ (as several AHA statements put it) of the Myanmar government? How was this built? 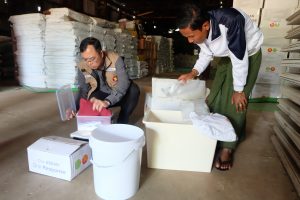 AHA Centre: In the past, AHA Centre has established cooperation with the Government of Myanmar, particularly the Ministry of Social Welfare, Relief, and Resettlement as the focal point, since the early stage. These include the Thabeikkyin Earthquake in November 2012, which was in fact our first response, and floods in August 2015. Second, the assistance is not a one-off approach. It is part of the whole process of developing ASEAN countries’ capability to respond to disasters, help one another, and increase our resilience to address disaster risks in the ASEAN region.

Myanmar is one of the three priority countries (in addition to Indonesia and Philippines) that have been identified under One ASEAN One Response contingency planning as possible hosts of future large-scale natural disasters . . . .

Thereby, the trust has been built through responses to previous disasters in Myanmar, close collaboration with the government through training, exercises, contingency planning, etc. and all these have strengthened our relationship with them and made it easier for AHA Centre to facilitate the humanitarian assistance in Rakhine.