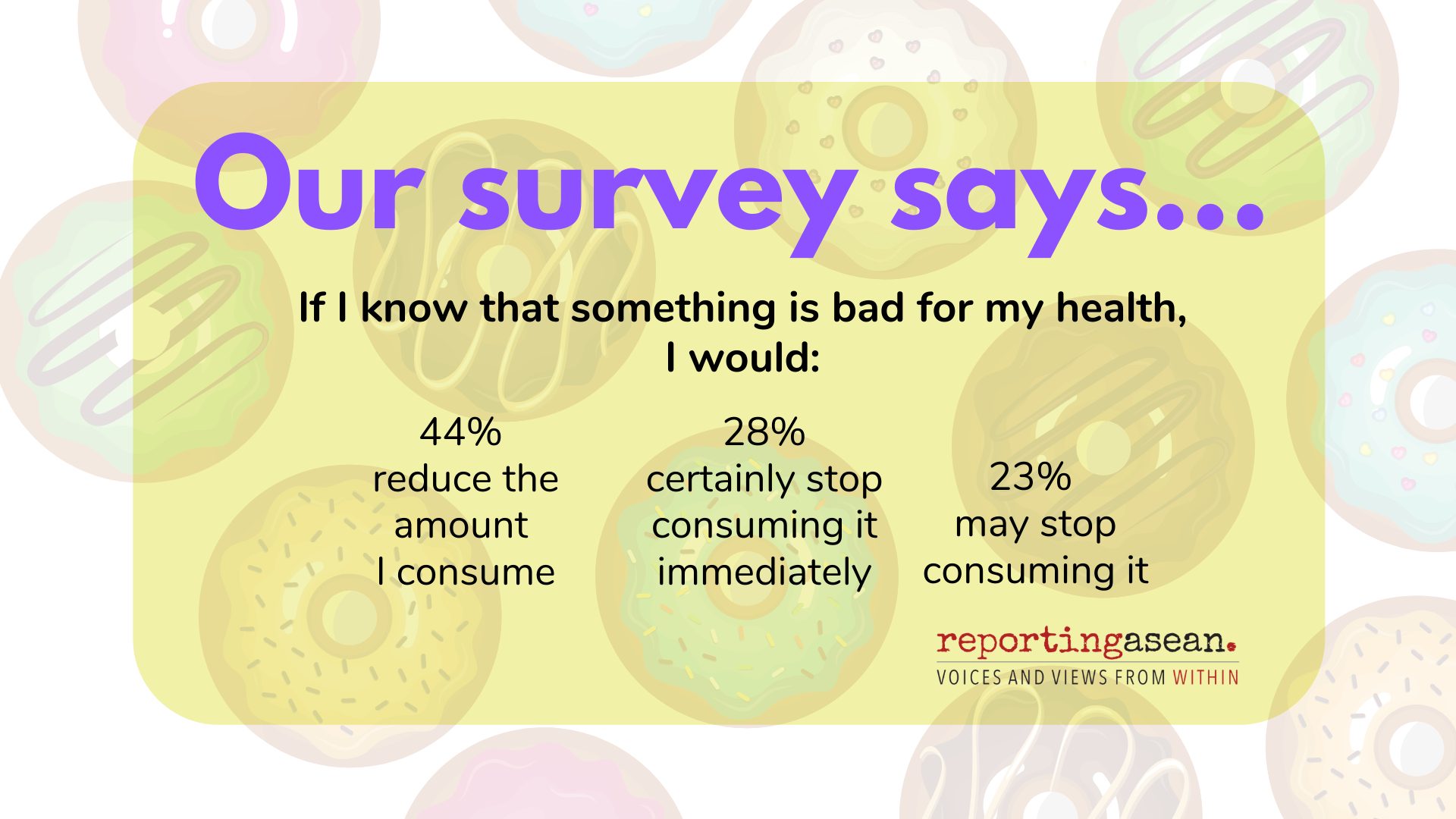 Read the first part of this two-part set here.

Vannaphone Sitthirath had never come across any information about trans fatty acids (TFAs)— until she trawled the internet in July this year, soon after she saw her worrisome blood-test results and elevated blood pressure.

“But the doctor (I saw) did encourage me to change food” and avoid red meat, she said. He advised her to take on a lifestyle change in food, exercise and adequate rest. Since then, she has been posting photos of her changed food choices, which now include more vegetables, to share them with friends through her social media accounts.

Vannaphone had consulted a doctor after the return of what she calls a persistent feeling of having a “heavy head”, which she first felt in mid-2019. That first round, the media professional recalls, came amid an overpacked schedule that had lots of travel, long work days and inadequate sleep — and this was not long after she gave birth to twins in June 2018.

“I hardly did any exercise after I had twins,” she recalled. “I sit too long in front of the computer, and I think others are the same.”

This time, Vannaphone’s checkup showed a blood pressure reading of up to 190/100, and she was put on medication. Her level of triglycerides, a type of fat in the blood, was at 172 mg/dl, a bit over the 150 upper limit of the normal range. “The doctor explained to me that this high level of triglycerides can be the cause of high blood pressure — it is a form of fat that blocks the flow of blood into our heart, that’s why my body works harder to pump the blood, and then (this) causes (high) blood pressure.”

Social media was the most commonly cited source of information about health, including trans fats, judging by the responses (68% of respondents) to a Reporting ASEAN survey.

A diet high in trans fats has been proven to push HDL down, push LDL up and can do the same for triglyceride levels. This, in turn, increases the risk of developing atherosclerosis or hardening of the arteries, which pushes up a person’s risk for heart attack, stroke, and Type 2 diabetes. A healthier lifestyle, including a better diet, can lower triglyceride levels.

The type of trans fats that is the target of the WHO’s REPLACE campaign and the subject of legal and policy measures to remove them from food products, is industrially produced or ‘artificial’ ones. They were introduced to lengthen the shelf life of processed food products, as well as add texture or savoury tastes.

Where they are still in use, driven by the demand for foods that are more convenient for busy lifestyles, industrial trans fats are typically found in refined oils that are used in fried products like donuts or fried chicken. They are used in packaged bakery goods such as pancake mixes and hot chocolate mixes, and biscuits, and are what makes margarine and spreadables creamy.

But the danger to life from industrial trans fats and the fact that they are so harmful as to merit a global campaign to stop their use is not quite common knowledge.

Indeed, Filipino cardiologist Regidor Encabo says it is not typical for him to come across people who are familiar with trans fats in this practice. Often, he says, patients who know about it tend to be nutritionists, dieticians or health buffs. Others can be the those who are worried about their or others’ health, or “have underlying fears and anxieties — probably someone in the family or a friend had a heart attack”, he explained.

In the responses to an online questionnaire that the Reporting ASEAN series conducted on what Southeast Asians’ awareness of industrial trans fats and their sources of information on nutrition, 56% of the 42 respondents from nine countries said that public information about the harm that trans fats causes is “a bit known”, while 21% chose the reply “not known” from a list of five options ranging from “not known” to “widely known”. Five percent said it was “widely known” and 3%, “widespread and everywhere”.

Asked about their personal experiences, 43% of respondents said they were unsure whether they had “at least on one occasion, noticed/seen trans fats as an item in the nutrition level of a food product”. A close 38% said “yes” to this question and 15% said “no”.

The survey results around information habits relating to health and nutrition may shed some light on approaches that are useful in public health.

This could useful especially in campaigns that put the elimination of industrial trans fats, which is far from the only health risk in food, in the wider context of people’s relationship with food and improving their nutrition literacy. Nutrition is different from allopathic medicine, and medical doctors do not automatically have expertise in nutrition.

Do Southeast Asians subscribe to, regularly read or follow a magazine, website, newsletter, magazine, program on health? More than half, or 55% of survey respondents, replied “yes”.

When it comes to information about health, including trans fats, the most commonly chosen source was social media, which was identified by 68% of respondents. Slightly less, or 63%, identified “the news”, such as newspapers, television, radio and websites of news outlets.

Interestingly, only 23% selected “nutritionist/health and wellness coach” as their source of information and the same percentage identified “my doctor/s”.

But when asked to arrange five information sources by their level of trust in them on nutrition issues, the respondents’ top choice was doctors, followed by nutritionist/health and wellness coach, family, and then friends.

For her part, Vannaphone did not stop at what her doctor told her during that brief consultation in July. More research, self-education and her own motivation pushed her to take action on her own well-being, starting with a shift in her perspective on food.

“I believe that if I need different results, I have to change my thoughts and actions. I’m now changing them. I am much happier to have made that decision,” she reflected. “I got three lovely boys (she has an older son apart from twins) and I want to be healthy and have energy to play with them.”

She had been feeling lethargic before she consulted her doctor earlier this, but not any longer. Since starting to do more physical exercise, some running, biking and using a trampoline, Vannaphone says she can already feel the difference. She discovered too that she enjoys doing boxing exercises in the gym. “I punch so hard because I want this out of my body, or least to get back to normal level,” she laughed. “That’s how I feel.”

These days, “I think a lot more before I order food,” Vannaphone said. “I know I can’t completely cut out bad food like butter, cheese, oil or bread (with refined flour), but I do limit them. I eat more vegetables. I want to be super fit and healthy, not rely on medication.”

*Johanna Son is editor/founder of the Reporting ASEAN series.