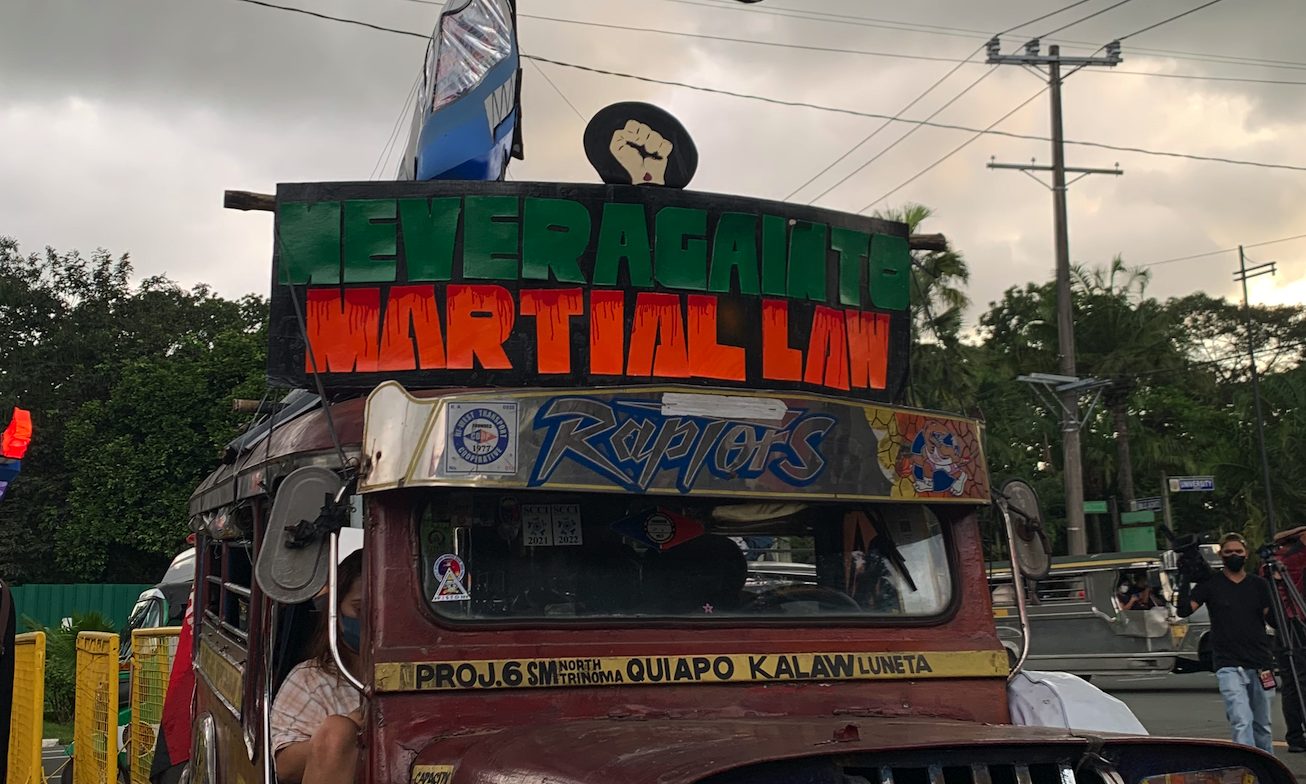 Home » Views and Points » Philippines: We Remember – Martial Law at 50  

“Never again, never forget!” These words echoed through the tree-lined streets of the University of the Philippines (UP), as students chanted them in protests commemorating the 50th anniversary of the declaration of martial law on 21 September.

In gloomy September weather and amid rains that came and went, the students, along with protesters from various civil society and advocacy groups, held up placards and raised their fists to show that they know, and remember, the human and political costs of that period under the dictator Ferdinand Marcos.

“It’s up to us, the youth, to remember,” one student leader called out.

That day in 1972 was the day Marcos – whose son and namesake is now President after willing this year’s presidential election – took over the entire government in response to what he announced was the armed insurrection and rebellion by “lawless elements” who aimed to seize power and overthrow his government.

With his Proclamation No. 1081, (dated 21 September but announced to the public two days later), then President Marcos soon shut down Congress, the independent press and had opposition figures arrested. This marked the start of his authoritarian rule, which ended when he fled into exile during the ‘People Power’ revolt of 1986.

During the official martial-law era of 1972 to 1981, the Marcos regime imprisoned 70,000 people, tortured 34,000. A total of 3,240 people were killed, according to Amnesty International. Ferdinand Marcos’ iron-fisted rule continued after the official end of that era.

Protests like this week’s marches are far from unusual in the premier state university. But it struck me that when it comes to martial law and the Marcos regime, UP has not only been home to rich dissent and debate since it opened its doors  in 1901. The university itself was at the frontlines of Filipinos’ fight against the dictatorship in the 1970s.

As a student, I remember the stories about that time that have been passed on to us.

These include memories of the Diliman Commune of February 1971, when the UP community barricaded the campus to protest armed, violent intrusions by Marcos’ security forces and the suppression of academic freedom. That was a time, we were told, when the university community illustrated solidarity, as what started as protests against an increase in gasoline prices exploded into a much wider action against the government.

My professors told us about the determined resourcefulness of the students and faculty members. Self-igniting molotov cocktails were said to have been produced by the physics department as defensive weapons. Students took over DZUP, the university’s radio station.

Among the places where barricades were set up at the time was University Avenue in UP’s campus in Diliman, Quezon City, where today’s student protesters gathered for this week’s rally. On 21 September, that street was filled with brightly coloured placards and large effigies.

Standing out there in the crowds, I recalled a talk I had with May Rodriguez before the  national election that was held in May 2022. May is the executive director of Bantayog ng mga Bayani (Monument of the Heroes), a memorial and museum that she describes as recognizing “those who acted against the dictatorship, fighting against an abusive system despite the sacrifices they had to make.”

A third-year UP student when martial law was declared, she recalls that people were being arrested for gathering in groups of five or more. This pushed May and her group of fellow activists to use coded communication methods, including using notes that were written in extremely tiny script on onion-skin paper, then folded and hidden in clothing or belongings, to plan meetings and stay in touch.  “We used precautions to avoid detection so we could do what we wanted to do,” she elaborated.

‘Instant rallies’ took place on campus, we heard. Students, we were told, would bang their trays on the canteen tables to the rhythm of a chant that went “Mar-cos, Hit-ler, Dik-ta-dor, Tu-ta! (Marcos, Hitler, Dictator, Lapdog!)”

Slogans resisting the dictatorship were written on strips of masking tape that May and her fellow students stuck on campus walls.

May was eventually imprisoned and tortured. When she arrived at their group’s “secret house,” one day, three men were waiting for her and pulled her inside. They tied her up and blindfolded her, questioning her for hours. They then stripped her and molested her just because they thought she might be hiding a letter somewhere in her body, May recalls. “I could not imagine what would happen to me later on,” she said.

May talked about the immense loss she felt after close friends in the anti-Marcos resistance were tortured and killed. Names she had held dear became desaparecidos or victims of enforced disappearances – a word made well-known by the experience of Latin American countries that were under right-wing dictatorships and military juntas in the seventies.

But May’s parting words resonated with hope that I found so contagious, and I felt something in me shift as soon as our conversation ended. “If only there was a way of giving hope to our young where reform in our system is possible without the bloodshed that comes with a revolution,” she said to me.

In our pre-election conversation, I asked May her thoughts about the possibility of Marcos’ son, Bongbong, winning the election, since the opinion polls had been showing him in the lead. She told me that she was still in denial of the fact that another Marcos term awaits the Philippines.

Now, another Marcos sits as President after Ferdinand Marcos Jr won 58.77% of the vote, earning him the highest voting-elect percentage since the 1986 revolt. Anger arises among many who live with the impacts of dictatorship, because the Marcos family has not been held to full account. During the campaign, the Marcos camp was busy painting a picture of Marcos Sr’s years as years of progress.

Responsibility – that of being holders of the memories of those like May – now falls upon our shoulders. The young must remember, most especially at a time of historical distortion. When the survivors, and our elders, leave us, and we are the ones who must keep, and tell, their stories well. If not us, then who?

(*Aerielle Ulanday is a senior-year journalism student at the University of the Philippines.)