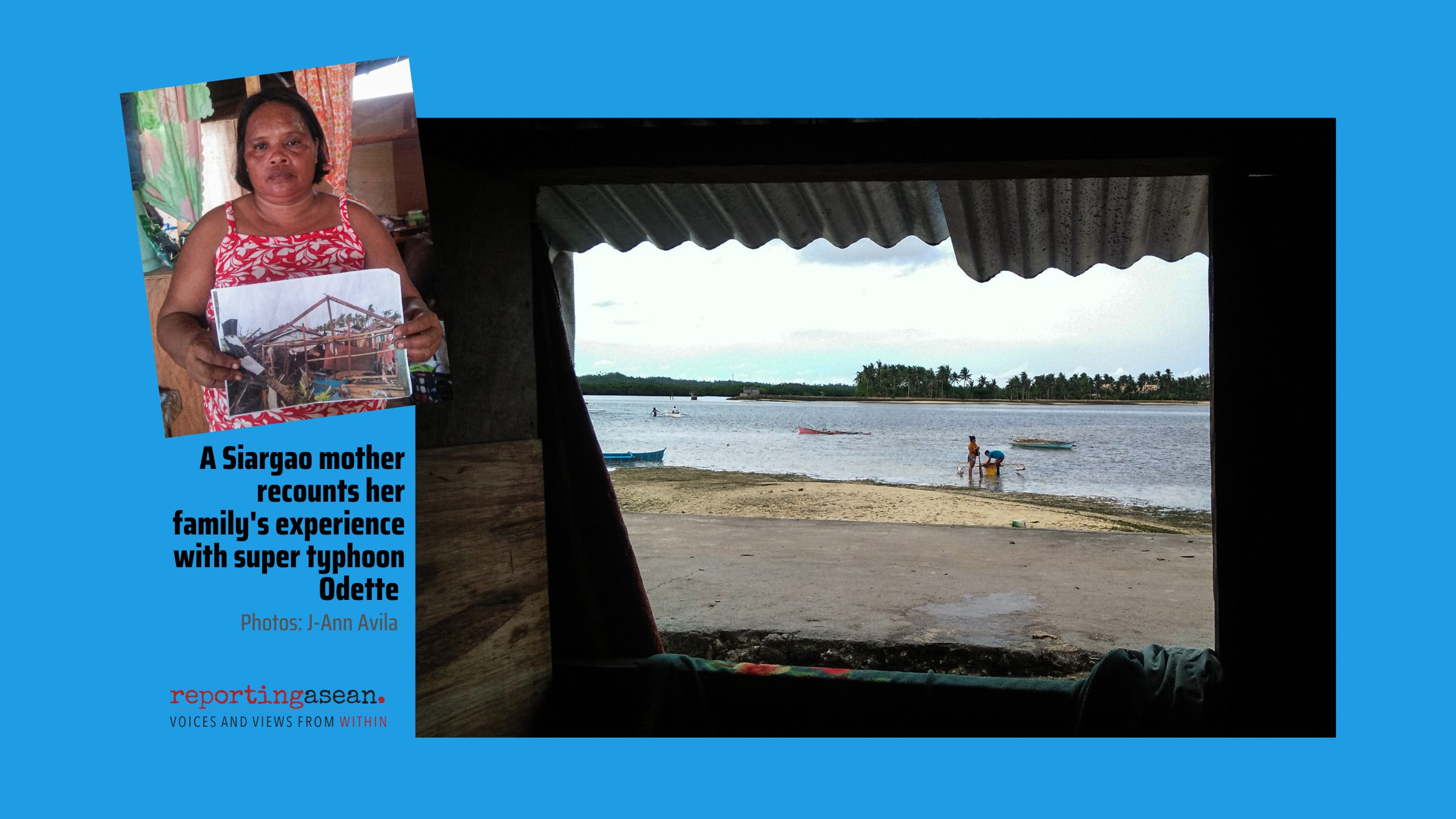 Home » Features » PHILIPPINES: ‘My God, It Was Such A Helpless Situation!’

Julieta Coro lives with 13 members of her extended family beside the seawall here in Dapa, a coastal village in Siargao island.

When super typhoon Odette (international name: Rai) made landfall on 16 December 2021, Julieta, a 46-year-old mother of 11 children, was still using crutches after falling off a motorcycle. One of her teenage daughters was two months pregnant. Her 7-year-old daughter got separated from their family while running – against rising floodwaters and strong gusts of wind – to get to the safer second floor of a building they had evacuated to.

The following is their story, told through anecdotes that Julieta and some among her family shared, along with photos, during two interviews in July and August 2022. Held in the local Surigaonon dialect spoken in this part of Mindanao, southern Philippines, these conversations were so emotional for some family members that they often ended up narrating, in unison, their experiences during the disaster one year ago.

“We were not allowed to stay in our homes anymore,” recalled Julieta. “The police repeatedly roamed around the area until evening. I think they only stopped by dawn.”

This was 15 December 2021, a Wednesday, the day before Odette’s landfall in Siargao. Typhoon warning signal no. 2 had already been raised by the Philippines’ weather agency for the island at 11 o’clock that morning (Odette’s storm signal would reach level 4, one short of the maximum 5, later on). Around 4 pm of that day, the Coro family hustled to prepare to leave home and head for the nearby high school, which was designated an evacuation centre.

One of her eight daughters, 16-year-old Ritchie, was in charge of securing all their birth certificates and bringing these with them. Ritchie kept the documents in a carton box together with some clothes, canned goods and instant-coffee sachets. “Whatever happens, at least we had them secure,” said Julieta Coro. “We kept them all in one place, including our marriage contract (with her husband Rexon).”

But the learning materials that Ritchie, a Grade 10 student, uses for her remote classes were left behind.

Everyone in the ‘boulevard’ (as locals commonly refer to their neighbourhood) heeded the instruction to evacuate ahead of Odette’s arrival. “Only two or three people, the husbands who could really manage on their own, chose to stay,” added Julieta.

When typhoon Odette hit land at 1:30 pm the next day, the Coro family was staying in a classroom at the ground level of the two-storey high school building.

Around 2 pm, Julieta says, the floodwaters outside suddenly started to rise. Along with other evacuees, she and her family headed for higher ground – the school’s second floor. “Sir Jundel, the teacher who was monitoring us, shouted, ‘Run upstairs! Run!’, but the rooms were locked and there were no keys,” she said.

She recalled people yelling in panic, “This is owned by the government anyway, let’s just destroy the door!”

“What screaming (there was)! Everyone was screaming! My God, it was such a helpless situation!” exclaimed Julieta, who tripped as one of her crutches got stuck in a canal hole while she was running toward the stairs.

Maricris Coro, Julieta’s 20-year-old daughter who was then two months pregnant with her second child, almost tripped in the scramble too. Crying in her arms was her 1-year-old son, her first-born. “I was okay. I was still able to run because my stomach was still small. If it was bigger, I would have really struggled because the wind was so strong,” said Maricris.

Julieta’s youngest daughter Jessa, now seven, got separated from the family during the mayhem, and was later found safe in the company of their neighbours.

The two other Coro children – Julieta’s eldest child, 25-year-old Machelle Ann, and 21-year-old daughter Richelle – live with their own families in other towns.

“Strong winds, fallen trees, flying roofs – we saw all of those,” was how Julieta described the view from the second floor.

Peeking through the jalousie windows in the school building’s toilet, which directly faces the sea, Julieta said “it was all just sapa (streams of water)” that they could see in the flooded area around them – with no house or structure in sight.

Julieta’s children were shivering after getting drenched by Odette’s heavy rains, but were able to borrow dry clothes from the 10 families they shared a classroom with.

“My husband and I were the ones (still) soaked until the next morning. But I did not feel the cold anymore,” said Julieta. “My concern that time was towards my children who were all gathered together, safe.”

She and her children stayed in the high school building for five days, living off relief goods and donations.

Meantime, her husband Rexon made initial repairs of the plywood walls and roof, made of galvanized-iron sheets, of their small home. Their hut with less than 30 square metres of space for 14 persons – Julieta and Rexon, their nine children, a son-in-law and two grandchildren – was totally wrecked. Its wooden frame looked like a skeleton after Odette’s powerful wind gusts blew off the roof and tore through the thin walls.

Although the family received a lot of food assistance and other relief goods, they did not receive materials with which to rebuild their house, said Rexon, 48. “Nothing came here, not even a single (piece of) plywood,” he said.

Photo Essay Siargao | ‘It Was Such A Helpless Situation!’

Asked if they tried to seek assistance from the local government, he replied, “We did not ask for help anymore, because even if we did, there were so many of us who needed help.” He added: “The others would really demand, but for us, we just wait to receive assistance.”

Fortunately, only the front part of his pump boat, which Rexon uses for crab fishing, was damaged even if it had been left outside at the height of the typhoon.

After he resumed work and began earning income again, he bought galvanized iron sheets and plywood for the roof and walls of their home. At the time of the August interview, he was still rebuilding their kitchen.

It is clear to Rexon Coro, the family’s sole provider who has been crab fishing for more than 20 years, that the climate has drastically changed and affected his livelihood.

“It was good back then, I had so big catches. But now it just depends on luck,” he said. “It’s hard, I earn just a small amount.”

Whether the Coro family can continue to stay in their home, located within 20 metres of the shoreline, is far from certain. There has been talk of the local government’s earlier calls for the demolition of homes that are too close for comfort to the water.

“The mayor, however, told us that we cannot be asked to leave if we still don’t have a place to transfer to,” explained Julieta. “It would be really tough if we are asked to leave. We have been living here for a long time.”

Aren’t they afraid of living so close to the sea after Odette? “Not so much,” Julieta said. But in the event of another typhoon warning, she continued, “We would immediately leave, we will be the first ones to evacuate.”

Lessons From A Super Typhoon: On Top of COVID-19, Education Got Another Hit From Odette