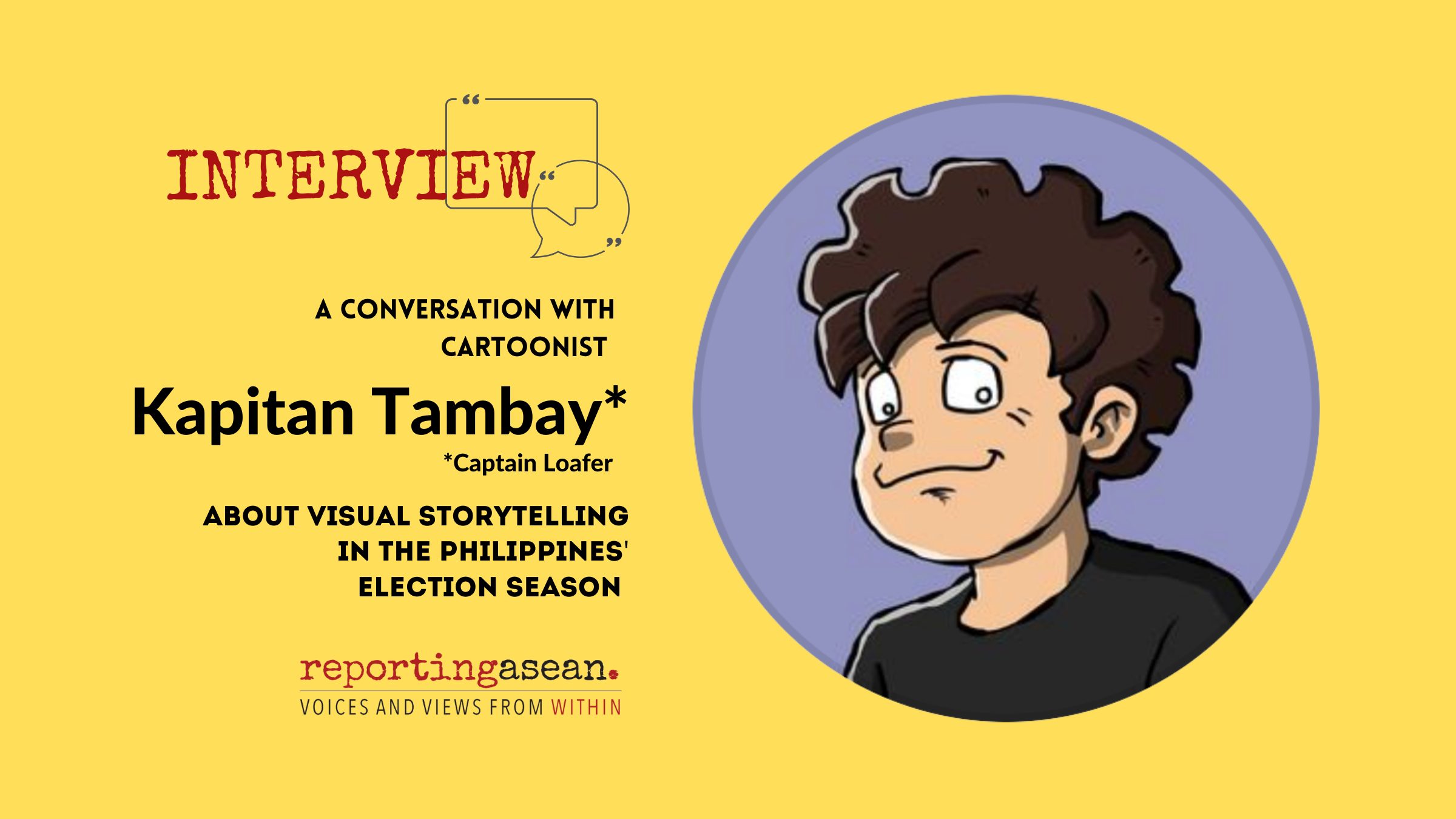 Home » #mediaonmedia » PHILIPPINES: ‘In Comics, You Can Show Instead of Tell’

“I just draw,” says Filipino artist Kapitan Tambay (‘Captain Loafer’), whose funny-but-serious cartoons are among those that have become viral in the intense political season in the Philippines, which goes to the polls to choose a new president on 9 May.

A lot of this intensity plays out in the online universe, through jokes and memes — and in cartoons that Filipinos find both a means of release for their political stress as well as a source of community, ahead of national polls in a polarised environment.

“Most of my works are just personal opinions,” says the 35-year-old visual artist, whose real name is Allan Leycano.  A professional animator before going freelance in 2016, he also does illustrations around other social themes and designs t-shirts that are sold online.

For a loafer, a character that supposedly does nothing much, Kapitan Tambay sees a lot. (‘Tambay’ is Filipino slang derived from the words ‘stand by’, referring to a no-good person, typically male, who hangs around street corners or somewhere in the neighbourhood.)

Some of Leycano’s cartoons show his support for presidential candidate Maria Leonor ‘Leni’ Robredo, through the painting of a wall in pink, which is the campaign colour of the Philippines’ current vice president.

Others target presidential candidate Ferdinand ‘Bongbong’ Marcos, the son and namesake of the former dictator and kleptocrat who ruled the Philippines from 1965 to 1986 and whose estimated ill-gotten wealth has widely been estimated at over 10 billion US dollars.

With voting day around the corner, the presidential race in a field of 10 candidates has now narrowed down to Marcos and Robredo in the country of more than 110 million people.

Reporting ASEAN’s Johanna Son: Where/how do you get ideas for your cartoons, especially in these political times ahead of the election, and how do you decide what to work on?

Kapitan Tambay: Usually, ideas or concepts for my comics come from my personal reactions to current events. I pick one which I think is most interesting and go from there.

I’ve seen some of the viral cartoons lately. How do visuals communicate in a way that text or speeches may not?

A lot can be communicated by visuals alone. In comics, you can show instead of tell certain story points. Character’s facial expressions, body language, poses, tell a lot of what that character may be thinking or reacting about without the use of words.

Do you see yourself as more of a voice or an echo, so to speak?

Kapitan Tambay: Most of my works are just personal opinions. It’s up to the viewers if they would echo those opinions. Some tweet, some post facebook statuses on their walls, me, I just draw. It’s the same.

What sort of reactions have you been getting to your work?

Kapitan Tambay: All sorts, but you have to be careful on what reactions to focus on. Always look for the more critical ones, be it supportive or not. Always look for insights that suggest growth.

How do you make an issue funny because it is a serious matter?

Kapitan Tambay: It depends. Some issues are already funny in itself, you just have to exaggerate a little. Many times you have to be a bit more creative. You have to exaggerate at the same time be rooted on facts. That’s where it gets tricky, and that’s also where you see the difference between a good cartoon and something made carelessly.

How do you/would you describe Filipino humour to a foreigner?

Kapitan Tambay: It depends on the topic. Something universally understood can be humorous to anyone. So I think in order for a foreigner to relate to a certain “joke”, you have to explain the context first. This is why I mainly keep my works as simple as I can. As much as possible, I try and convey a message without having to explain much.