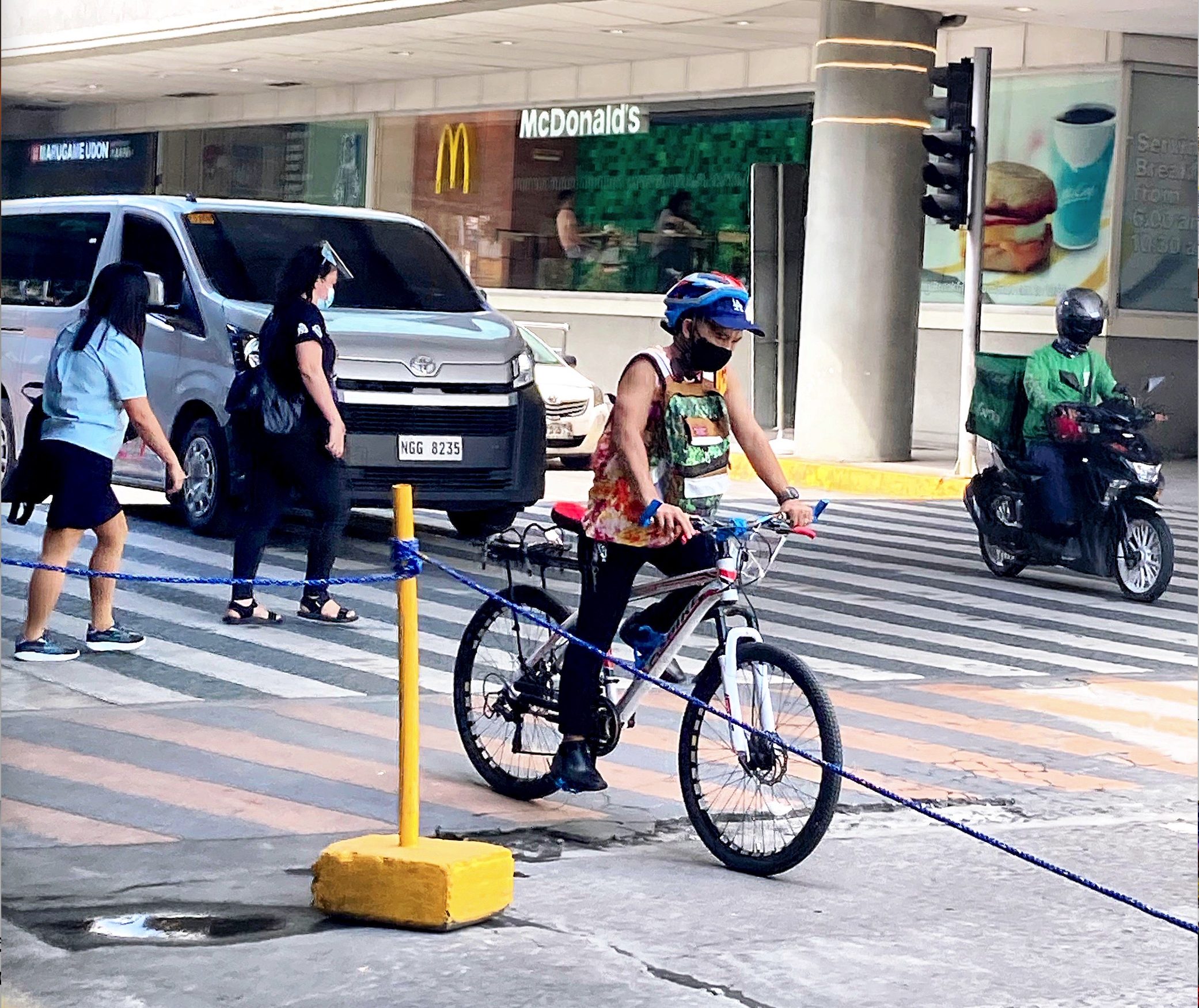 The sight of rows of bright orange plastic bottles laid out as makeshift traffic barriers along the 18-lane Commonwealth Avenue, often called the most dangerous highway in the Philippine capital, did not sit well with the its traffic agency.

This was in June 2020, when group of bikers deemed it necessary to protect an increasing number of commuters who had turned to cycling to navigate the urban spaces of Metro Manila during the strict COVID-19 lockdown. At one point, all modes of public transportation had been shut down as well.

“[Cycling] was the only form of transport allowed, and we didn’t see any movement from any sector to keep the bikers safe on the road,” said Ann Angala, co-founder of the Bikers United Movement (BUM), which pushes for “inclusive mobility and sustainable transport that benefits the ordinary Filipino.”

But what, for the group was badly needed support was a safety hazard in the eyes of the Metro Manila Development Authority (MMDA), the state agency that manages the 16 cities and one municipality that comprise the Philippines’ capital region.

Its officials threatened to sue and fine the BUM for laying out the improvised bike lanes.“[The use of plastic containers] is not safe for bikers because that is not enough to ensure their safety. It is very dangerous,” then MMDA spokesperson Celine Pialago said.

This clash of perceptions around the Philippine capital’s transportation network and its liveability is far from new. But the pandemic has given a sharper, more urgent edge to challenging the view that roads in developing-country megacities exist first for cars, more than for pedestrians and car-less commuters.

Two years into COVID-19, cycling has become much more of a staple alternative to inadequate public transport in Metro Manila, home to more than 14 million people. More people are more aware of cycling, whether as an alternative to or in addition to cars, or as physical exercise, in addition to it being a more climate-friendly mode of transport.

In this survey by the Philippines’ Institute of Labor Studies, 85% of respondents cited health benefits as their reason for cycling, and 82% said they did so in order to get to work. “This was probably triggered by the pandemic and limited transportation due to the imposition of community quarantines,” the survey report said.

The Philippines’ transport department secured in 2020 a 1.3 billion peso budget (38 million US dollars) from the national pandemic response funds to create more than 500 kilometers of bike lanes across the country.

But having more bicycles does not, by itself, make for a long-term solution to the needs of city residents – most of whom do not own cars. Some 88 percent of households here and in the Greater Manila Area do not own their own vehicles, going by a 2015 study by the Japan International Cooperation Agency.

Urban roads need to be more inclusive of people who not have cars, if they are to contribute to a more sustainable type of living. For advocates of better transport, the goal is long-term: to solve not only the shortage of means of public transport amid the health crisis but the decades-old issues of road inequality.

It is not surprising that when the COVID-19 lockdowns brought public transport to a stop, masses of peoplehad to walk or bike for many kilometers in the heat and pollution, to get to work. But Metro Manila’s transportation woes preceded the pandemic.

Overcrowding in transport stops and terminals, and the lack of access to and interconnection between transport modes have been perennial challenges in the Philippines, a country of more than 103 million people.

The capital has three urban railway lines, the oldest of which opened in 1984. Other forms of mass transport are planned for the future. The country’s first subway system, running 36 kilometers, is supposed to be fully operational by 2027.

It is not surprising that when the COVID-19 lockdowns brought public transport to a stop, masses of peoplehad to walk or bike for many kilometers in the heat and pollution, to get to work. But Metro Manila’s transportation woes preceded the pandemic.

In his final State-of-the-Nation Address in July, President Rodrigo Duterte said that his administration, which ends its six-year term in 2022, had “taken away the misery of public commuting.”

But 87% of Filipinos would like bicycles, pedestrians and public transportation to be prioritized over private vehicles, a survey commissioned by the Department of Health in 2020 showed.

“It’s not about waging a war on the road versus motorists. It’s really to establish a cycling culture,” said environmental advocate Yeb Sano, who is also BUM president.

As it is, 69 percent of road users who take public transportation are crammed into only 22% of available road space in Metro Manila, says the study ‘Systemic Shortage in Philippine Public Transportation’  by the Ateneo de Manila University. This is because “car-centric policies” have led to the construction of more expressways, highways, bridges and connector roads  – for private motorists.

“The Philippines, especially Metro Manila, is riddled by bad urban planning. If you don’t incorporate active mobility, walkable cities and breathable cities at the very start, you will get locked in many, many years and decades of bad infrastructure,” said Sano.

CYCLE AT YOUR OWN RISK

Road deaths and accidents are far from unusual too, and these road conditions increase the risks that cyclists face.

The MMDA recorded 337 fatal road crashes in Metro Manila in 2020, 20 percent of which involved collisions with pedestrians. The Philippines has 12.3 road deaths per 100,000 people, World Health Organization figuresshow, or about the same as the 12.2 figure of Indonesia, which has more than twice the Philippines’ population and more than thrice its number of motor vehicles.

Cyclists are more likely to get injured or killed in a road crash than people in motor vehicles, says the Move As One Coalition, which advocates for sustainable mobility. The MMDA recorded 2,606 bicycle-related accidents in 2020, from 1,759 in 2019.

“Safety is the number one concern of any cyclist,” especially women, said urban planner Keisha Mayuga, a consultant for the World Bank who has been cycling since her university years. “Before the pandemic, biking along any main road was really scary because you were not acknowledged on the road.”

Angala says female bikers, who usually take numerous short trips for errands, have to deal not just with issues like the lack of secure parking but catcalls and lewd remarks. “More women will bike if only we are assured of safety,” she pointed out.

Initiatives such as awards and scorecards have also been to set up encourage cities to make their roads more friendly to cyclists and commuters.

The Mobility Awards, launched in October 2020 by the Institute for Climate and Sustainable Cities, recognizes progress in more mobility-friendly cities. Earlier in June, BUM developed a ‘bike lane scorecard’ that lets cyclists rate publicly-funded bike lanes from 1 to 5 (one being the highest).

“Because cyclists are vulnerable road users, the infrastructure has to meet the standards in terms of quality. The standards are very crucial, they have to be consistent and uniform,” said Sano.

A cultural shift is needed away from the view that cyclists and pedestrians are “second-class road users”, Sano says. Making bicycles more affordable would help, he adds. For  Filipinos earning a minimum wage of around 500 pesos (10 dollars), the 3,000 peso (60 dollar) cost of a no-frills bicycle is steep.

For Mayuga, the pandemic presents the Philippine government with an opportunity to craft a masterplan for ‘active transport’, which refers to non-motorized transportation like walking or cycling. A bike-sharing program would allow people to use public bicycles available across the city to get to the nearest train or bus station, she suggests.

A total of 72 percent of Filipino adults with non-home-based jobs say that commuting to work has become harder during the pandemic, results from a fourth-quarter 2020 survey by the independent pollster Social Weather Stations showed. The most common way of getting to work was walking, which was reported by 44% of respondents.

“It’s not just cycling but also walking,” Mayuga said. “A lot of Filipinos walk, but there’s no infrastructure for them. Tying together all forms of transportation is crucial for commuters.”