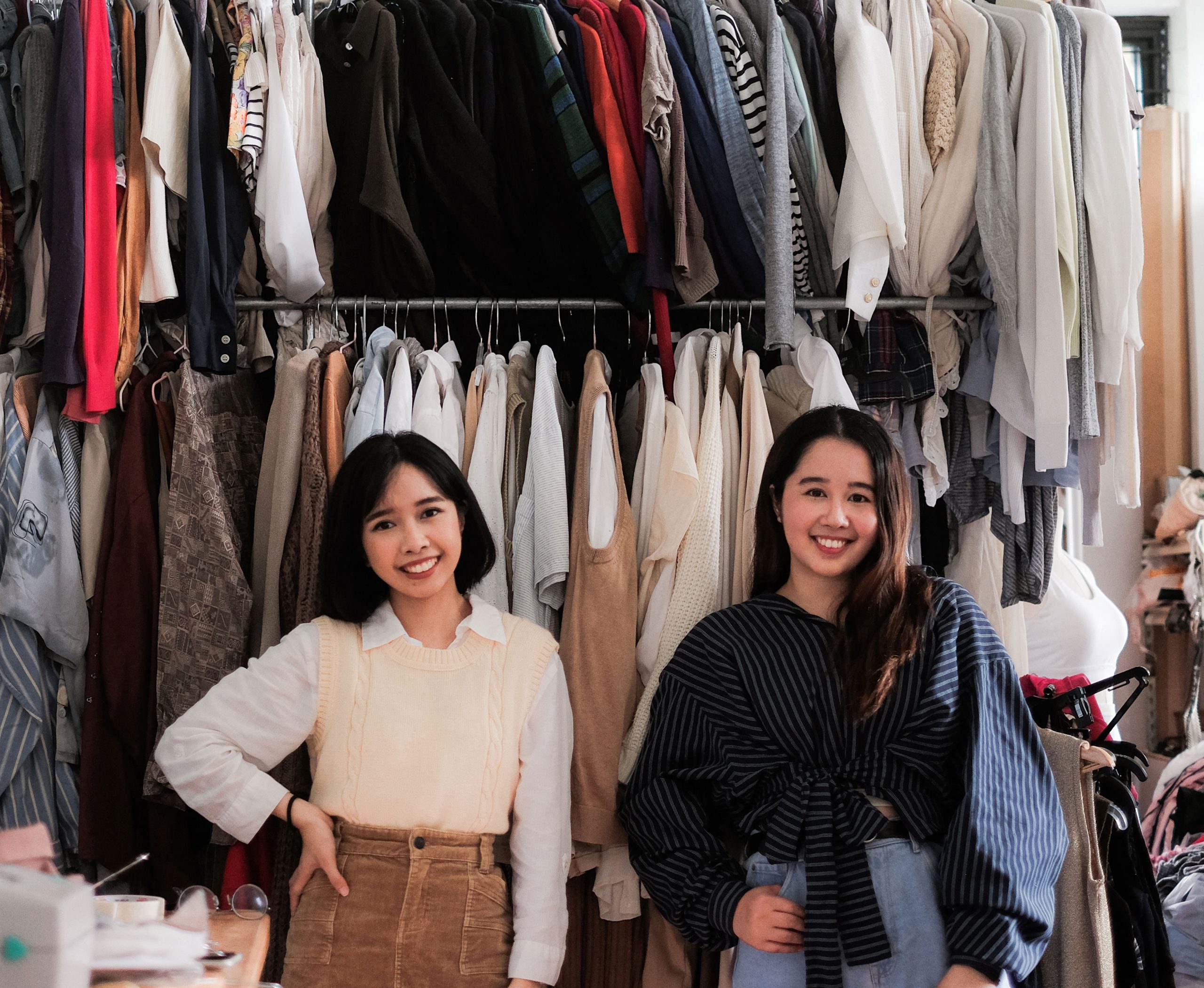 Weddings used to be the bread and butter of Filipino entrepreneurs Joan Alessandra Sibal and her sister Jade – until the COVID-19 pandemic struck.

With social events set aside, Joan took a break from her wedding makeup artistry business. Jade, a fine arts graduate, took a pause from wedding photography.  “When the lockdown was announced [in March 2020], our busy lives were put to a full stop.  All events were cancelled until further notice and [we] felt so hopeless for two months,” said the 30-year-old Joan, two years older than her sister.

But this setback soon threw open an opportunity for the sisters, who used their shared passion for Korean pop culture and ‘ukay’ (secondhand or thrift goods in Filipino) to open an online vintage shop called ‘Kiyowo Vintage’ in May last year.

“We would never have thought of this even in our wildest dreams last year,” said Joan.

The two also saw in this a way to combine their business skills and personal interests with responses to two pandemic-era challenges they saw around them: providing work to women workers and making consumers more aware that they can use individual choices, such as rethinking fast-fashion purchases, to ease the stresses of a planet in distress.

Kiyowo Vintage – ‘kiyowo’ means cute in Korean – has five female employees who handle packing and shipping of items, reworks and customer service. “They are people that we worked with before and were displaced by the pandemic,” Joan explained.

The fact that the shop carries vintage goods goes well with the idea of consumers caring, or wanting to know, about the real environmental cost of the products they use. Vintage clothes stores are, in a way, being marketed as an alternative to fast fashion, or mass-produced clothing that are highly profitable for global brands but are often made by poorly paid workers in developing countries.

“Now that it [the business] has grown to this, it inspires us to strive more to help more unemployed women and also to help the environment at the same time,”  Joan added,

Kiyowo Vintage is among several vintage online shops born during the COVID-19 pandemic, and are owned by women who have turned to these as a new source of livelihood, creative outlet and advocacy of sorts.

The shops’ well-curated collections of secondhand clothes tend to attract shoppers who are conscious not only of costs but of the environment. Some find it a plus to be able to do some shopping when many stores are closed amid restrictions on public mobility, in a way that does not put more strain on the environment, whether in terms of huge amounts of water used to produce cotton, or wasted clothing that ends up in landfills.

Social science professor Neen Sapalo, 27, said she turned to vintage fashion because “the garment industry creates so much waste by making substandard pieces of clothing that cannot be of use long-term.”

“I know how many of the fast fashion brands pay their workers poverty wages and make them work in dire conditions with no benefits or hazard pay whatsoever. So I don’t want to directly support them by buying from their stores,” she said.

For Abby Caranto, a freelance fashion copywriter, buying “curated” secondhand clothes online ca also mean “supporting shops that actually do a bit of good for all,” especially the environment.

The real cost of a single T-shirt goes far beyond its price tag. The usual figure cited for the volume of water used to produce the cotton for one shirt is 2,700 liters, as the World Wildlife Fund said as far back as eight years ago. Up to 10,000 liters of water is required to grow the one kilogramme of cotton needed for a pair of denim jeans, says the United Naitons Framework Convention on Climate Change (UNFCC).

The industry is the second biggest consumer of water globally, producing some 20% of its wastewater and releasing half a million tonnes of synthetic microfibres into seas annually, says the UN Environment Programme (UNEP).

The UNFCC considers the reduction of carbon emissions in the fashion industry key to limiting global warming, since it accounts for 10 percent of global greenhouse gas emissions. There is, in fact, a UN Alliance for Sustainable Fashion in place.

While the fashion industry is valued at $2.4 trillion, it loses some $500 billion of value every year due to the lack of recycling and clothes that are thrown into landfills before ever being sold, UNEP says.

After its seven-year research into sustainable fashion, Sweden’s Mistra Future Fashion project said in a 2019 study: “Some garments will enter the second hand market or change ownership by other means prior to being sent to waste management, but eventually most of these garments will be incinerated.”

In an earlier report, it called efforts to lengthen the lifespan of garments, including through “collaborative consumption scenarios” like secondhand stores and rental services, “an interesting scenario considering that so much clothing is discarded before the end of its technical lifespan, and so much of the fashion industry’s output is directed towards ‘fast fashion”.

A GREENER WAY TO SHOP?

For sellers like Joan Sibal as well as Jevelyn Tumbaga, who own the online store Shop Dahlia based in the northern Philippine province of Pangasinan, converting customers into “slow-fashion” shoppers is a source of validation that they are contributing to more planet-friendly habits.

Fast fashion shortchanges the environment and its consumers with clothing that have“poor quality because they need to sell it cheap”, Sibal explained. “With that, more of these clothing items do not stand the test of time and only end up in landfills in less than a year. If you have tried shopping in vintage shops, you would see the difference of the quality of the textiles used and the craftsmanship that went into creating the items.”

How far can slowing down consumerism in clothes go in making sustainability a stronger social, and personal, good?

Buying vintage fashion may be a more sustainable option for some people while some consumers may prefer other ways, such as buying less, going minimalist or attending clothes-swapping events held in some Southeast Asian cities. But “consumers can only have so much power” in making wider changes across the industry, Caranto says.

“On one end of the spectrum, the pandemic has influenced people to rethink what matters to them, and this, in turn, determines where they would rather spend money or which brands they would support,” she explained. “On the other end, we still have people who have found joys in consumerism – shopping gave them something to look forward to amidst long lockdowns.”

For Sibal, vintage fashion “may not be the best solution to the growing waste that the fashion industry is creating,” but it is definitely helpful.

Tumbaga agrees that the pandemic has influenced the way people’s consumption habits – but not entirely for the better. “E-commerce truly hit its peak in this pandemic. The good thing is, it helped a lot of small businesses and made things accessible for more people. But it also made people impulse buyers, usually of things they don’t need, out of boredom,” she said.

There is a long way ahead in making sustainability a daily habit, Caranto believes.

“Sustainability is a collective effort: for one thing, more laws should be put in place to support sustainable fashion. We can buy vintage, but it wouldn’t stop fashion brands selling something new, or new fashion brands from emerging and selling the exact same things—not to mention the manufacturing wastes that come from these,” she said.

Every action counts, Sibal believes. Choosing slow fashion could mean shopping “with a clear conscience, knowing that what we buy hasn’t contributed to someone else’s suffering and to global warming,” she said.

*This feature is part of Reporting ASEAN’s Sustainability Series, which is supported by the Heinrich Boell Foundation Southeast Asia.