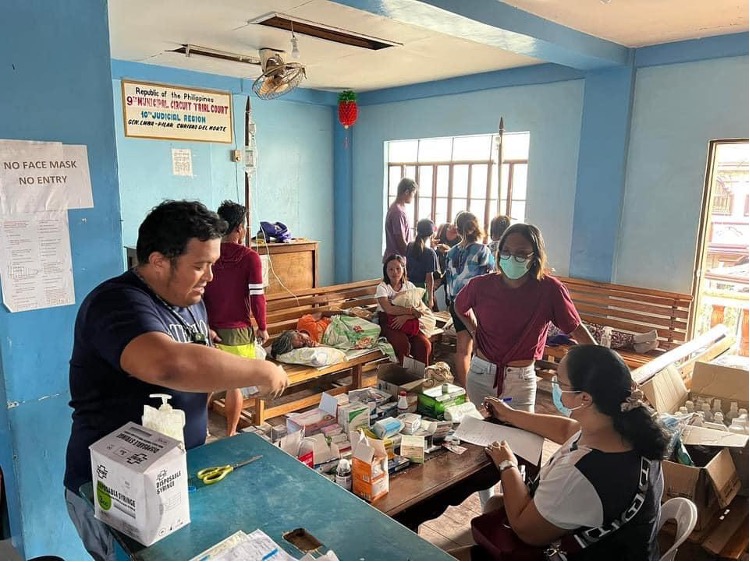 Home » Features » PHILIPPINES: ‘Coordination is How We Solved the Diarrhoea Outbreak In Just One Week’

Pragmatism, volunteerism, quick response time and a dose of luck were all crucial to helping General Luna town in Siargao cope better with the typical health challenges that arise after a disaster like super typhoon Odette.

There was an outbreak of diarrhoea after basic services like water, electricity and transport were disrupted on the island, following landfall by Odette on 16 December 2021. General Luna’s vice mayor Romina Rusillon Sajulga – who is also a nephrologist – says the community managed to address the diarrhoea outbreak in just one week.

In the excerpts from this conversation with Reporting ASEAN’s J-Ann Avila, she shares her recollections about those long days ahead of the one-year anniversary of the disaster.

We had a diarrhoea outbreak, and the district hospital was already overwhelmed. They had around 30-bed capacity there but they were already admitting 120 patients. . . The chief of the district hospital told me there were already many casualties and if we send patients there, they wouldn’t be able to take care of them anymore. So what we did was we converted the municipal building into a makeshift hospital.

Our patients were just lying on the floor, but they were better off [that way] compared to if we brought them to the district hospital that cannot accommodate them anymore. Good thing there were a lot of doctor volunteers—young, idealistic ones—we were really lucky… . So we were admitting 25 to 30 patients, and some of them [had] already collapsed, because the diarrhoea outbreak was really severe.

We did not think of it [the pandemic] anymore. Actually, during the typhoon, our COVID cases were already going down… it was almost zero, nobody was positive. So we forgot about COVID during that time because what we wanted was to survive.

HELP FROM A MEDICAL MISSION

Medicines were arriving because a lot of private groups helped us. We were able to manage the makeshift hospital. After three or four days, the group from Davao Regional Medical Center arrived. They told me, “Doc, we’re going to make a field hospital.” They said they wanted somewhere just near the municipal building. I said, “No, I’ll bring you here (referring to a public resort that had initially been converted into a COVID-19 isolation facility)”.

It’s a good thing we already have beds here… and they were not destroyed. So we just cleaned everything in just a few hours. So all of the patients, with diarrhoea or any problems, were transferred here. The Davao Regional Medical Centre already took over…They had everything. They were amazing; they had complete specialties.

When the Davao Regional Medical Center took over, we went to the barangays (village, or the smallest administrative unit in the Philippines) to have clinics—to complement [the medical response].

The thing is, during a disaster, families think of their health last. What the parents prioritize are really food and shelter. The patients they bring us are only those who are really in bad condition. So when the doctors went to the communities, it was easier to provide patients with early treatment and management.

COLLABORATION BETWEEN PUBLIC AND PRIVATE GROUPS

And then, of course, we conducted IEC (information, education and communication) telling the people what to do, to boil their water. The DOH (Department of Health) also arrived bringing their tubs for water.

Since we no longer had mineral water available because we did not have electricity, private (business) owners lent us their extra generators. They activated the water refilling stations and were the ones who shouldered the cost, including the delivery.

What we did from the LGU [local government unit] was teach them how to connect with the different barangays. We told them to look for the barangay captains. For instance, one barangay will have an assigned pick-up at 7 AM. They will leave their (empty) gallon and then it will be returned with safe, drinking water.

So, if you really want a quick response, it’s really coordination. You have to talk. That’s how we solved the outbreak of diarrhoea in just one week.

Lessons From A Super Typhoon: On Top Of COVID-19, Education Got Another Hit From Odette