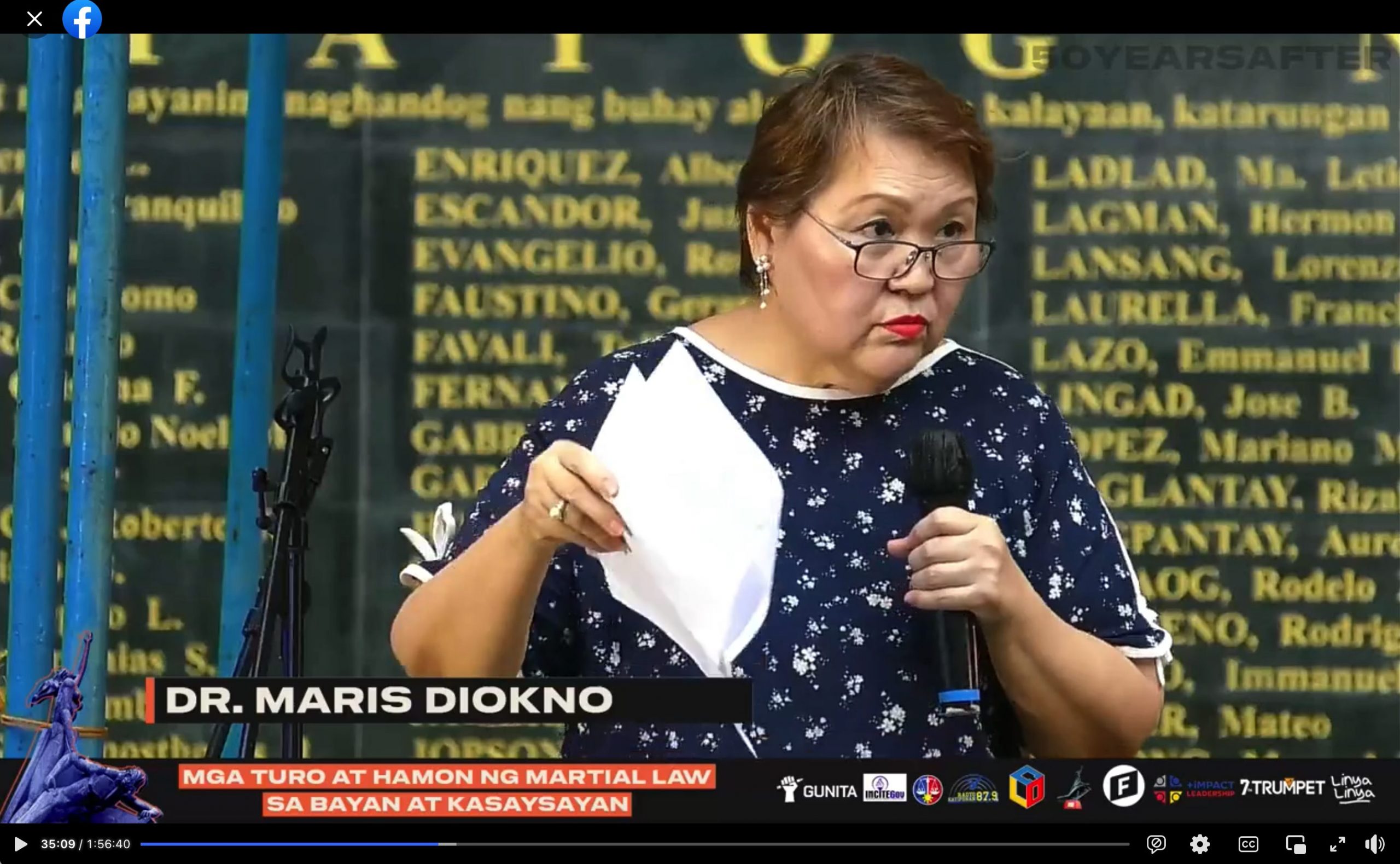 The commemoration of the 50th anniversary of the imposition of martial law comes with a painful paradox.

Not only is the family of the late dictator returned to power – the Pulse Asia surveys early this year show that respondents, including those who live during the period of martial law, and the educated ones, regard martial law favourably.

So anong nangyari itong nakaraang 50 taon mula nung dineklara ang batas militar? (So what happened in the 50 years since martial law was declared?) How can one who was around during martial law think it was good?

General Order Number One, dated September 22, 1972, states, and I quote: “I, Ferdinand E Marcos, President of the Philippines, do hereby proclaim that I shall govern the nation and direct the operation of the entire government, including all its agencies, and instrumentalities.”

The statement is as clear as can be. Martial law was dictatorship and yet, a good number of Filipinos believe this was not so, or that it was good. Bakit? (Why?)

But here’s my question: Is the past real only if you experienced it? Must it be personal to have impact on you? And – is history any less important because it did not affect you, or did not directly affect you, or your family, your friends, or your community? The answer to all these questions is of course ‘no’.

Martial law had several face masks, which the dictatorship wore depending on the audience and purpose. One face mask was ‘smiling’ martial law. This was for a largely international audience, whom the dictator believed would be mollified by “constitutional authoritarianism”, which was built on a constitution of questionable genealogy. Alam ba ninyo yung plebisito para sa 1973 Constitution walang botante, wala. Mga citizens’ assemblies yun. Hindi beripikado ang identidad, sino yung composition ng assembly, kung sila ba ay eligible. Ang pagboboto walang secrecy of the ballot – show of hands, open viva voce. Tapos may mga report din na kung anu-anong tanong ang tinanong sa kanilang sagutin na walang kinalaman sa saligang batas. (Do you know that there were no voters, none, for the plebiscite for the 1973 Constitution. Those were citizens’ assemblies. Their identities, the composition of the assembly were not verified, to see if they were eligible. The voting had no secrecy of the ballot – show of hands, open viva voce. Then, there were also the reports that they were asked a host of questions that had nothing to do the constitution.) Here, the dictator’s closest collaborator proved to be the Supreme Court, whose majority acquiesced in authoritarian decrees and policies.

Martial law’s other face was that of law and order, which was designed to attract the business sector, ordinary citizens worried about crime on the streets and believe it or not, parents who could not control their children. The curfew and mandatory haircuts of long-haired boys became the visual metaphor for discipline, both individual and social. Filipinos could live with these measures because though annoying, they were not hurtful.

But authoritarian rule had yet another mask – that of outright repression, which the dictatorship applied forcefully, but selectively. The dictator railed against oligarchs, a handful of his chosen targets, mind you, and readily seized their companies, installing cronies in their place. This was not a Robin Hood measure, but the dictatorship banked on the lack of public appeal of rich capitalists.

The dictatorship, however, reserved its harshest weapons against a select few – those it tagged as communists and subversive elements, thereby sparing the rest of society, the majority, from illegal arrests, torture and other human rights violations. Playing on the public fear of communism and social disorder, this strategy, to me, was the most successful of the dictatorship’s strategies. It also explains why even those who live during the period remember martial law kindly. The dictator selected his targets, while the rest of the population was safe – as long as they behaved.

The (US) historian Dominick LaCapra classifies social trauma into structural trauma and historical trauma. Structural trauma, he explains, is a trans-historical phenomenon to which everyone is subjected, even though there are no identifiable victims. Because of its structural nature, the trauma is a non-event, a constant, if you will, defying the boundary of time.

The structural state of unfreedom, for example, quickly became evident to my father, (human rights lawyer and anti-Marcos opposition leader) Jose ‘Ka Pepe’ Diokno, after his release from prison in 1974. In a letter to a friend, this is what my father wrote, and I quote: “I have found relatively few changes in the city in the two years I was in prison. In fact, I saw more new buildings in Fort Bonifacio (military camp) and Camp Aguinaldo (armed forces’ headquarters) than in Manila. The city is cleaner – there does seem to be better law and order, but then, cemeteries are also generally clean, quiet and peaceful. Since my release, I have been nagged by the uneasy feeling that my release has really been merely a transfer from a smaller to a larger detention camp. For in both Fort Bonifacio and Manila, the air seems fouled by the same faint odour.”  Yan ang structural trauma. (That is structural trauma.)

Historical trauma, in contrast, is a specific event or series of events that affect particular victims. Take the case of torture and warrantless arrests during martial law, which are examples of historical trauma. These took place in concrete times and locations and harmed specific persons, away from public view. So two things at once happened, were achieved. First, the privatisation of historical trauma made deniability by the regime easy because safehouses and prisons were restricted areas, and the press was controlled. Who knew what happened, except for the victims and their tormentors?

Second, since, according to the dictatorship, only communists, their sympathisers and destabilisers were jailed, the selectivity of martial law victims meant that ordinary peace-loving citizens could expect to remain outside prison, even though in essence, they were not free.

Because the trauma of martial law was both structural and historical, therefore, one could have lived during the period without feeling like a victim – structural trauma – while those against whom the dictatorship unleashed its repressive force bore the brunt of suffering – historical trauma.

The result is what we see today – divided or conflicting social memories between those who experience two kinds of trauma.

But here’s my question: Is the past real only if you experienced it? Must it be personal to have impact on you? And – is history any less important because it did not affect you, or did not directly affect you or your family, your friends, or your community?

The answer to all these questions is of course ‘no’.  I was not around when (Portuguese explorer Ferdinand) Magellan arrived (in the Philippines in 1521, marking the start of Spain’s more than three centuries of colonial rule), but I understand the significance of his expedition. Besides, our history has shown again and again, that our people cannot live in a freedom-less condition for long. Fourteen years of martial rule are certainly shorter than hundreds of years of colonial overlordship.

Our mistake these past 50 years has been one of omission. We failed to appreciate the nature of public memories, of damaging historical events and how these memories are formed. After EDSA (the ‘People Power’ Revolution of 1986 that ousted Marcos), we neglected the history of the period, focused as we were on reconstructing our nation from the ruins of martial law, and confident perhaps that the expulsion of the dictatorial regime was ipso facto proof of its excesses and abuses. We did not share stories about martial law in our textbooks, and in various circles of our social lives and in ways that connect with people of all ages in groups. As false stories about martial law were stealthily creeping around us, we allowed them to take root not just in schools, but in the public imagination.

We are concerned today, and rightly so, about battling against historical revisionism. But we must go beyond the facts and teach historical empathy, which is not a sentiment but an ability, a learned ability, to understand events, historical actors and motives using credible historical evidence. Factual knowledge alone will not connect us with a past. Historical empathy will.

(Dr Maris Diokno is a professor emeritus in history at the University of the Philippines, and former head of the National Historical Commission. This is a transcription of her remarks at the event marking the 50th anniversary of the declaration of martial law in the Philippines, held on 17 September 2022 and organised by the Center for Liberal and Development Studies.)

(Translation of the parts delivered in Filipino, into English, was done by Reporting ASEAN’s Johanna Son.)