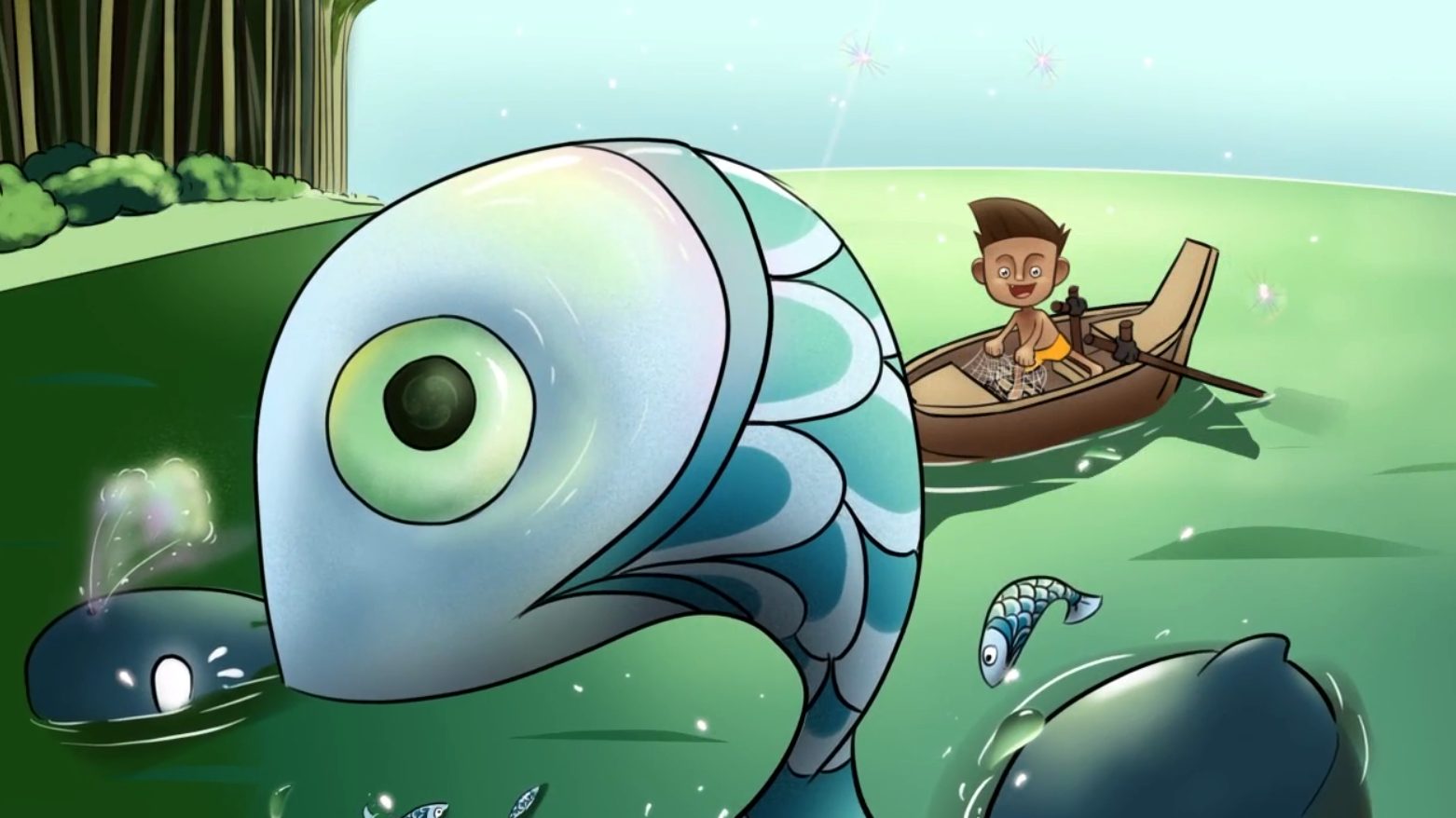 ‘Nược Đua’ is how Vietnamese living in the Mekong Delta used to call out to the dolphins ‘to help them out when they were fishing. That was decades ago, when the Irrawaddy dolphin could still be seen in Vietnam.

‘Nược’ is this dolphin species’ name in Vietnamese. In English, ‘Nược Đua’ would be equivalent to ‘’Go, Nuoc!’, explains its 21-year-old creator Le Chan Thinh, who is a multimedia student at the FPT Arena (Ho Chi Minh City) in Vietnam. His animation (4:30 minutes) won third prize in the digital design category of this year’s FPT Edu Color Up contest, held in March.

When he saw the news in February 2022 about the death of the last Irrawaddy dolphin in Laos, Chan Thinh says it stayed with him – and soon presented itself as an idea to use for his school competition.

“Since I love animals, the news carved deeper into my mind,” he said. He knew little about endangered species in the Mekong region as a young person living in south-central Bien Hoa city, but says going to the nearby Tri An lake helped him imagine the Mekong environment and its rich biodiversity.

The animation aims to urge people to act and preserve the nature and culture they are part of, lest species like the Irrawaddy dolphins, “perish and become a sort of fairy tale,” says Chan Thinh. The dolphins that remain are a delight for tourists and visitors to watch, but among the biggest threats to their survival are gill nets that cause death or injuries.

Below is Reporting ASEAN editor Johanna Son’s chat with Chan Thinh to find out more about his animation. (Coincidentally, this is complementary to a feature story I was working on about the Mekong’s giant species, many of which are endangered. That story, which also discusses recent deaths of Irrawaddy dolphins, is here. – Johanna)

Johanna Son: What made you decide to focus on the Irrawaddy dolphin as a topic?

Chan Thinh: I love animals in general. They’ve always been my inspiration throughout my journey. I remember when I was a kid, I really enjoyed going to the market with my mother so I could spend roughly 2 hours watching the fish people were selling 🙂 I still have numerous animal toy figures in my room at the moment.

How did you give the story a Vietnamese touch?

Chan Thinh: The Irrawaddy dolphins actually lived in Vietnam, too, about 30-40 years ago. They went extinct by the time I knew about them, but their stories remain. However, there is little information about them (mostly interviews and oral stories), so what I did were finding proof that they did exist, and they did play some specific roles in Vietnamese culture and nature. Then I took inspiration from the articles as well as footage taken in Myanmar and Cambodia, where these dolphins are still living and doing nearly similar practices with the indigenous (community).

Finally, I tried to recreate the scene with a Vietnamese touch based on the stories of Vietnamese fishermen interviewed by professional journalists in the past.

You show the deaths of dolphins that had been playing with the Vietnamese youngster in a series of illustrations that look like they were on parchment paper, or an old wall. Was this meant to show events as they appear in history, recounting what happened over time?

Chan Thinh: Yes. I believe that it is best to show the sequence on an old page because it is easy to express the time and space in which these events took place. It has a flow that helps people realise and compare the situation then and now in a short amount of time. I also chose this way because I wanted to shift from a small story to a bigger picture, where you can see its impact on others’ life. The story of these dolphins was not a personal experience for the kid, but it was actually a part of everyone’s life in the Mekong Delta, which emphasized how important they are to us and how cruel our actions were, if we put them and their consequences together on a paper.

The spreading red colour that signified blood would have quite a strong impact on viewers, I would think. What reactions did you get from viewers?

They were surprised when they first saw the joyful dolphins in the river and all the fish swimming in circle. Many people told me that if I didn’t do this animation, they wouldn’t know that these creatures existed. The entire fishing sequence brought about bright and joyful emotions. We watched it together in the contest before I gave a presentation about the film. There were kids who were only 5-12 years old and they seemed to love it. Then the sequence of our bad practices caused the room to be silent. My teacher described her feelings as being tormented, and some of my friends said that they felt bad.

Tell me about your use of colours to change the mood. At the start, the river scene is green – the tree leaves are green and the water’s clear. At about 3:10 in the animation, when the fisher is old, the shade of the whole space becomes red, after the killing/catch of dolphins. What was your thought process like?

Actually, at first, I thought more about colours when I worked with culture and nature.

When I started painting the frames, I thought a lot about the colour of the river. Blue seems to be too typical and unrealistic while yellowish-brown and reddish-brown, like the actual waters in the region, didn’t look so good on film, so I used green, which is also a realistic colour for the river when it’s clear. Green also brings about the feeling of being fresh, energetic, and joyful, not just the feeling about nature, but also about culture.

When we see films and shows about Asian culture in general, we see a whole lot of red and yellow. That seems to become a stereotype palette when it comes to culture. I wanted to make some changes. There were still some bits of yellow from the youngster and the boat, but the main theme is green.

My main goal was to create an intersection of nature and culture (you can see the patterns were also in the trees and water) to ensure that my definition of ‘origin’ (the topic of the competition) is not just culture or nature. It must be both because they are not really separate things, and together, they form our existence, behaviours and visions.

The red part was kept for the later sequence because, in the wheel of colour, red is the direct opposite of green, so the mood it creates may also be completely opposite to what green does. That means the viewers can experience a drop in the mood when they see the shifting between the two sequences. That may explain a bit about why the room got silent when I showed the animation, but that’s just my assumption 🙂 This part was more about the feeling when I draw something. I don’t put too much effort into thinking logically, but rather try to make something that actually affects my emotions 🙂

Have you ever seen an Irrawaddy dolphin, or any dolphin?

I saw some dolphins in the amusement park before, but not Irrawaddy dolphins.