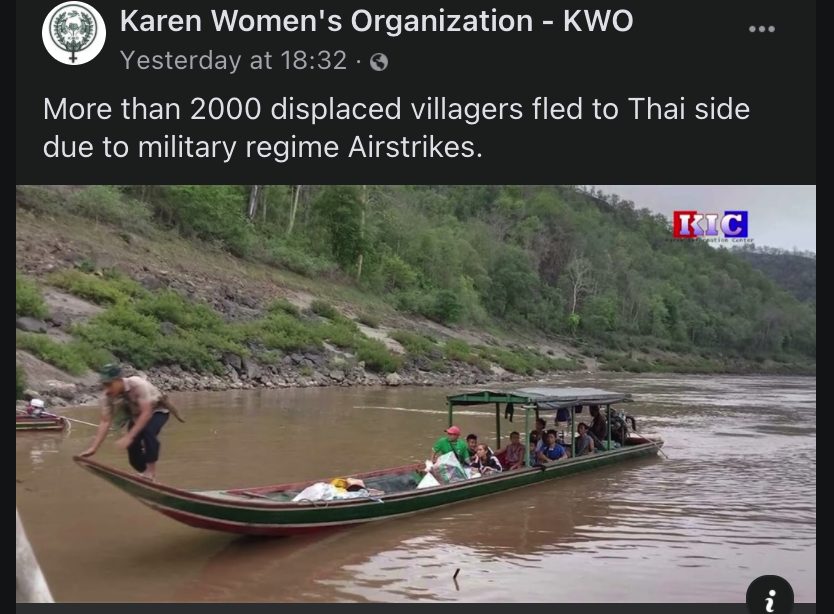 Home » Views and Points » UNHCR: ’No One Chooses To Be A Refugee’

Refugees, people fleeing air strikes by the Myanmar military, and those who are at risk of political persecution, or worse, if they are caught by the junta – they have been the focus of attention in the months since the Feb 1 coup.

This is particularly so in Thailand, which shares a border of over 2,400 km with Myanmar and has hosted nearly 92,000 refugees, most of them of Karen ethnicity, in nine camps for more than three decades.

At least three instances of Karen people having to flee to the Thai side in the wake of the Myanmar military’s shelling have been reported. Many, too, have arrived at Myanmar’s borderlands across parts of Thailand, in search of safer, if temporary and uncertain, refuge, amid the junta’s brutal crackdown on the broad-based opposition to its takeover of power.

“The situation in Myanmar remains volatile, and we have seen increased displacement both within Myanmar and to neighbouring countries,” said Catherine Stubberfield, UNHCR Regional Spokesperson for Asia and the Pacific.

In the chat below, Stubberfield explains that all states, even those that like Thailand, are not signatories to the 1951 Refugee Convention, fall under international law on providing safety to those fleeing conflict. “No one should be sent back to a country where their lives or freedoms may be at risk,” she said.

Four months after the coup, the United Nations High Commissioner for Refugees (UNHCR) says some 12,000 refugees from Myanmar have found their way to their neighbouring nations – 7,000 to Thailand to the east, and from 4,000 to 6,000 to India to the west. Arrivals in India were reported as early as Mar 5 and in Thailand, from Mar 27 onward, it says in a 20 May update on the Myanmar crisis.

These add to the number of those who have been displaced inside Myanmar since the coup, which UNHCR estimates at 61,000.

The number of people displaced by conflict in Myanmar, including from the military’s battles with ethnic armed groups since independence in 1948, was already substantial. Within Myanmar before the coup, 370,000 people were already displaced as of December 2020. Outside the country, there were already 980,000 refugees and asylum seekers in neighbouring Bangladesh, India and Thailand.

“UNHCR has not had access” to the arrivals from Myanmar in Thailand, the UNHCR’s 1 May update said. In its 20 May report, UNHCR said that it, with its humanitarian partners, was “engaging with” the Thai government on response efforts and have set up an inter-sector working group. UNHCR says it has prepared relief items enough for 5,000 households or 16,200 people.

On May 14, news reports quoted Thai Prime Minister Prayut Chan-ocha as saying Thailand will not push back people fleeing violence in Myanmar.

Johanna: UNHCR has urged neighbouring countries not to send back people fleeing Myanmar, saying that the principles and international laws around non-refoulement are “binding” on all states (outside the 1951 Refugee Convention). Could you explain this commitment?

Stubberfield: All countries have an obligation not to remove anyone at risk of persecution or other serious harm if returned to their country of origin. Anyone crossing a border and seeking asylum in another country must be able to access it. Those fleeing for their lives must be given protection and must not be returned to a place where their lives or freedom may be at risk. This is the principle of non-refoulement.

Under customary international law, the principle of non-refoulement is binding on all States, whether or not they are party to the 1951 Convention Relating to the Status of Refugees or other relevant international or regional refugee or human rights law instruments. The principle of non-refoulement applies to all individuals, irrespective of a person’s legal status, including asylum seekers and refugees.

If a state that people are seeking asylum/safety/refuge in is not a signatory to the convention, what is the most that UNHCR can do/take action on, and what can it not do?

UNHCR works with States throughout the world to provide protection and assistance to refugees, asylum-seekers and stateless persons. This includes working with countries that are not party to the 1951 Refugee Convention, and many countries that are hosting large numbers of refugees, including in the Asia-Pacific region.

The primary responsibility for processing asylum claims, including for determining refugee status, rests with States, although UNHCR may conduct refugee status determination procedures under its mandate, and also does so on behalf of, or jointly with the authorities of certain countries.

Is it correct that anyone who gets to Thailand from Myanmar and contacts UNHCR can be sure they can have some form of protection?

States bear the primary responsibility for providing protection to those seeking asylum on their territory. In accordance with our international mandate, UNHCR works with states to ensure that refugees are extended protection and, that the principle of non-refoulement is upheld so that individuals are not sent back to their country of origin where they would be at risk of persecution or other serious harm.

How would UNHCR define what it calls “humane border practices” during COVID-19?

Across the world, we have seen that it is possible to both ensure access to asylum while protecting public health. States can, for example, imposes measures at the border such as health screening, testing, quarantine and self-isolation, in order to manage health risks while also respecting the principle that no one should be returned to a place where their safety or freedom may be at risk. Where COVID-19 related bans or border closures are implemented, such measures must not result in denying refugees an effective opportunity to seek asylum or result in refoulement.

What is UNHCR’s view looking ahead about the numbers of people fleeing Myanmar?

The situation in Myanmar remains volatile, and we have seen increased displacement both within Myanmar and to neighbouring countries.

Gillian Triggs, UNHCR’s Assistant High Commissioner for Protection, (has) released a news comment urging countries across the region to offer refuge and protection to all those seeking safety. . . . It is vital that anyone crossing the border, seeking asylum in another country, is able to access it. No one should be sent back to a country where their lives or freedoms may be at risk.

How does the resettlement option look like? The figures of resettlement from the nine camps for Myanmar’s refugees in Thailand have been falling sharply and the statistic of up to 99% of the world’s refugees not getting resettled seems not too encouraging.

There are an estimated 1.44 million refugees in need globally. Given the low number of resettlement places relative to the overall refugee population, resettlement is therefore only an option for the most limited number of refugees.

In addition to urging states to increase their resettlement quotas, UNHCR is also continuing to advocate for labour and education pathways for refugees to travel to third countries, as well as for increased inclusion of refugees to allow them to contribute to social and economic activities in countries of asylum.

The issue of asylum seekers/refugees from Myanmar has been there for more than three decades. What does this past experience tell us?

No one chooses to be a refugee. When people’s lives and freedoms are at risk, they flee to ensure their survival. It is therefore vital that anyone seeking asylum is able to access it, and that they are able to receive protection and assistance while they are displaced. Myanmar’s neighbours have a long history of providing sanctuary to refugees; in turn, UNHCR stands ready to support all countries in the region to ensure that refugees have the protection they need.

How have you found the response to UNHCR’s calls for donations for the Rohingyas thus far, and does UNHCR see a need to organise a similar campaign after the Myanmar coup?

UNHCR has appreciated the support of the international community, including the general public, to the Rohingya refugee response in Cox’s Bazar, Bangladesh. Any further needs in relation to the situation in Myanmar, and elsewhere in the region, will be communicated as they arise.

(Note: According to the April Myanmar Humanitarian Update by the UN, only 12% of the $276.5 million US dollars needed in this year’s Humanitarian Response Plan has been covered so far, and it thus “remains severely underfunded”.

*Johanna Son is editor/founder of Reporting ASEAN and has followed regional issues for more than three decades.