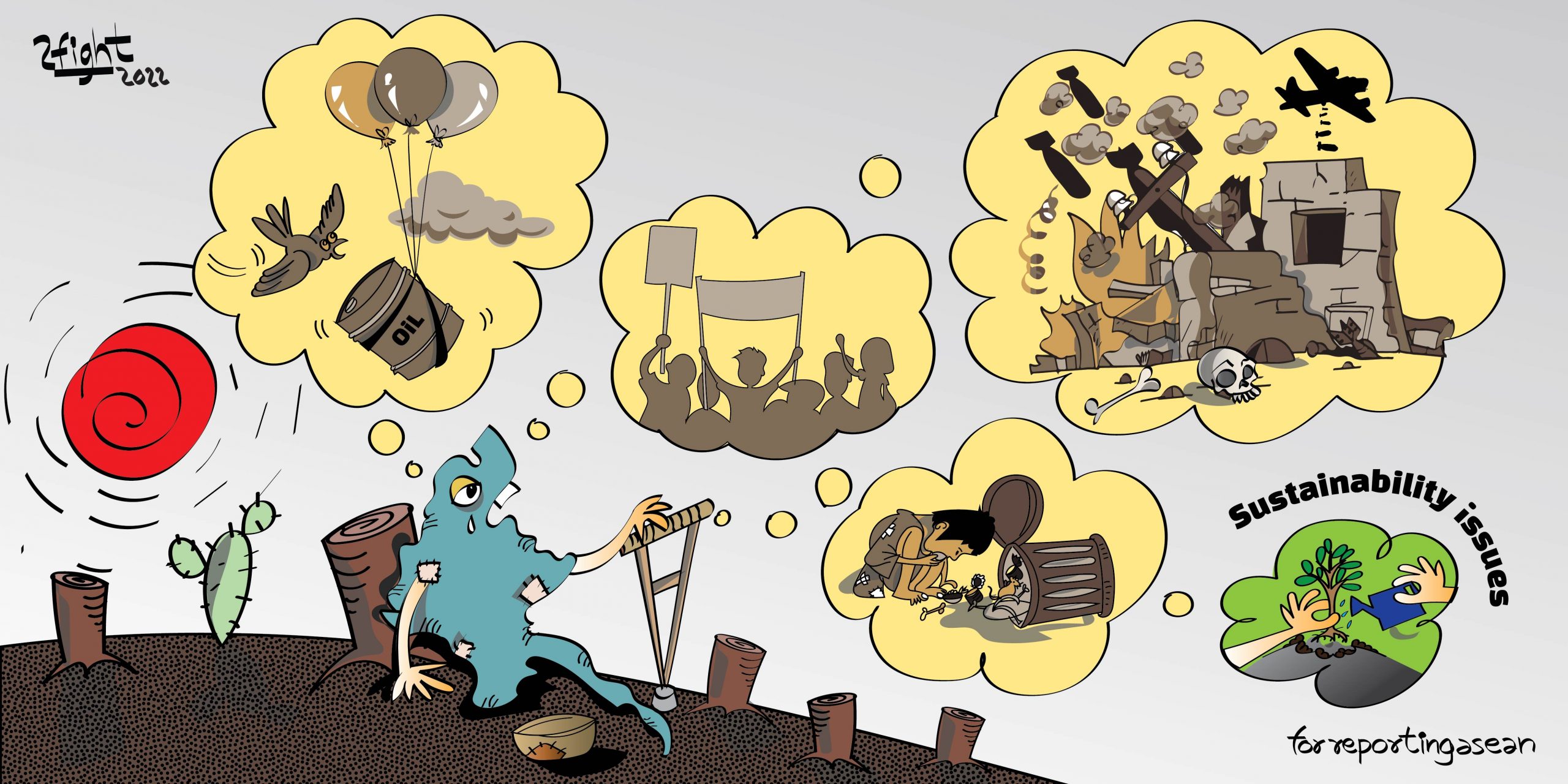 “The military exploit (natural resources) as they like, and we do what we like,” says Myint, who lives in Khamti township in north-western Sagaing region, site of the most number of clashes between the Myanmar military and resistance forces. “Everyone knows that one day there’ll be no more resources and and this will harm the environment. But in these difficulties to find daily income, we have no choice.”

Indeed, talk of sustainability may feel out of sync in this country of over 55 million people, many of whom have been finding it hard to think beyond daily survival since the February 2021 military coup.

For them, life in these precarious times is shaped by mix of armed conflict and its humanitarian toll, a crumbling state, a pandemic, an economic crisis, disasters triggered by extreme weather events – at a time when the world is on edge from the war in Ukraine.

“During a revolution, there are no functions of environmental protection measures in both public and private sector,” said the founder of a respected environment group, who asked not to be named.  There is “no more space” for advocacy groups working in this area given the repressive environment under the military’s State Administrative Council (SAC), he added.

He estimates that since the coup, two-thirds of local and international non-government groups have stopped operations. Apart from safety concerns for staff, receiving funds from overseas has become a headache since it draws the junta’s attention. “It is not easy to pay staff because of the difficult situation around the flow of money,” the senior campaigner said.” Even though foreign countries want to support, they can’t carry (this) out.”

Yet Myanmar is among the ASEAN countries with the highest risk – given its weakest capacity – to deal with the impacts of multiple, simultaneous crises. As early as two months after the coup, the World Food Programme said that up to 90% of national government activity had stopped.

The setting aside of sustainability concerns when it is hobbled by political, humanitarian and health crises poses a “most highest risk” for Myanmar over decades, even after this current military rule, says a senior Myanmar green campaigner.

“The current situation in Myanmar is an infallible example of conflict, climate, and pandemic-induced crisis about to happen,” Adelina Kamal, associate senior fellow at the ASEAN Studies Centre of the ISEAS-Yusof Ishak Institute, and ex-chief of the ASEAN Coordinating Centre for Humanitarian Assistance (AHA Centre), wrote in ‘ASEANFocus’..

Myanmar ranked second after Puerto Rico in the long-term Climate Risk Index, which lists countries most affected by extreme weather events by fatalities and financial damage from 2000 to 2019.

Other indices make similar points. Myanmar ranked lowest (19.2 in a scale of 0 to 100) in the 2022 Environmental Protection Index, which rates progress toward environmental health, ecosystem vitality and mitigating climate change. Its EPI ranking fell by 3.8 points over the last decade.

Myanmar is also the lowest-ranking Southeast Asian country (36.7 score out of 100) in the Notre Dame Global Adaptation Initiative Index, which measures a country’s vulnerability to climate change, as well as its readiness. (Afghanistan’s score is 33.5.)

Countries need to adopt an “anticipatory approach” by weaving multiple crises into their risk planning and responses, the AHA Centre suggests. But the capacity to do this would be “inadequate in a fragile context with failed state structures and political turmoil”, Kamal said – such as Myanmar.

Myanmar, along with Indonesia and the Philippines, are the three ASEAN countries at highest risk from multiple natural hazards from earthquakes to cyclones and floods, says the ASEAN Risk Monitor and Disaster Management Review 2020. But “Myanmar, which has the lowest coping capacity for disasters, has been ranked as the country that is most at risk,” Kamal explained.

In 2021, the AHA Centre recorded an average of four disasters daily, around the clock, in Southeast Asia, a region that Kamal says is called “the ‘supermarket of disasters’ due to the variety and intensity of natural hazards” it faces.

Not least, diseases can break out in conflict and disaster-stricken areas. Weather-related events destroy crops and interrupt harvests, adding to food insecurity from conflict.

“Unusually heavy rains” in mid-March 2022 caused floods that damaged salt farms in Mon state – the second largest salt producer after Rakhine – to the point that this “affected the national supply of salt,” says the World Food Programme’s Myanmar price update for March.

Armed clashes, including the military’s arson attacks, which Data 4 Myanmar says have destroyed more than 11,000 homes, leave people without homes and livelihoods, basic infrastructure and services. “Many displaced farmers have been unable to harvest and sow crops since October of 2021,” WFP Myanmar said, warning that this can affect the sowing of paddy rice.

A total of 240,000 people were displaced in the first quarter of 2022 alone, pushing the total number of displaced to over one million people as of end-May, the United Nations reported. In Myanmar’s food-insecure situation, 66% of the funds WFP is seeking for the second half of 2022 is for life-saving food assistance.

Reminders of what Myanmar’s susceptibility to climate-related disasters include the devastation wrought by severe cyclones such as Nargis in 2008, Giri in 2010, Komen in 2015 and Mora in 2017.

While Myanmar’s Nationally Determined Contributions (NDCs) to world climate goals – the military and the anti-junta National Unity Government submitted similar versions in July 2021 – speak of energy transition, the top energy issue for many is the power outages plaguing huge parts of the country.

Having electricity is a challenge by itself, since Myanmar has the lowest electrification rate in Southeast Asia. The use of wood to cook is common, especially outside cities. In a 2020 statement, the World Bank said that only 50% of the country’s households were connected to the public grid. It put Myanmar’s access to electricity – having a source that can provide very basic lighting and charge a phone or power a radio for 4 hours a day – at 70.4% in 2020.

The military has been turning to Myanmar’s rich natural resources, including extractive activities, to bring in badly needed revenue.

Natural gas is Myanmar’s top export, and the country exported nearly three-fourths of the natural gas it produced in 2019,World Bank figures show. Precious and semi-precious stones are among its top five exports.

The SAC has pushed oil palm projects to reduce dependence on imported oil, and at one point said that bananas would be planted in miltary barracks.. The Myanma Timber Enterprise has held several auctions of timber, including seized teak.

From 2013 to 2020, 95% of tree cover loss in Myanmar occurred within natural forest, says the Global Forest Watch platform. Most of this was in the Shan region, followed by Tanintharyi, Kachin and Sagaing — and all of them are theatres of conflict.

A boom is underway in northern Kachin for the mining of rare earth elements, which are used in products like smartphones, electric vehicles and solar cells, the Mekong Eye reported. Mining activities picked up after the coup, it quotes locals as saying.

“We can see wildlife trade online openly” too, said one environment journalist, who has shifted to reporting on armed clashes and human rights.

“Under these difficulties, we can face natural disasters like flooding, landslides in the coming rainy season. If these cases happen this year, it’ll have severe effects on people’s lives,” warned the Myanmar environmental expert.

“If a double/triple whammy of natural and man-made disasters were to strike Myanmar, it would not recover,” said Sharon Seah, coordinator of the climate change programme at the ISEAS Yusof-Ishak Institute. “Managing a failed state in ASEAN is a frightening spectre that many do not wish to think about.”

For the Myanmar campaigner, his country is losing even more time in its quest for a better life for its people.“It’s too hard to say if the country’s situation will be normal in the next 50 years,” he pointed out. “We can’t even imagine that.”

(This is part of Reporting ASEAN’s Sustainability Series, which is with the support of the Heinrich Boell Foundation Southeast Asia.)

Our data visualizations and infographics around sustainability are in the S Files.