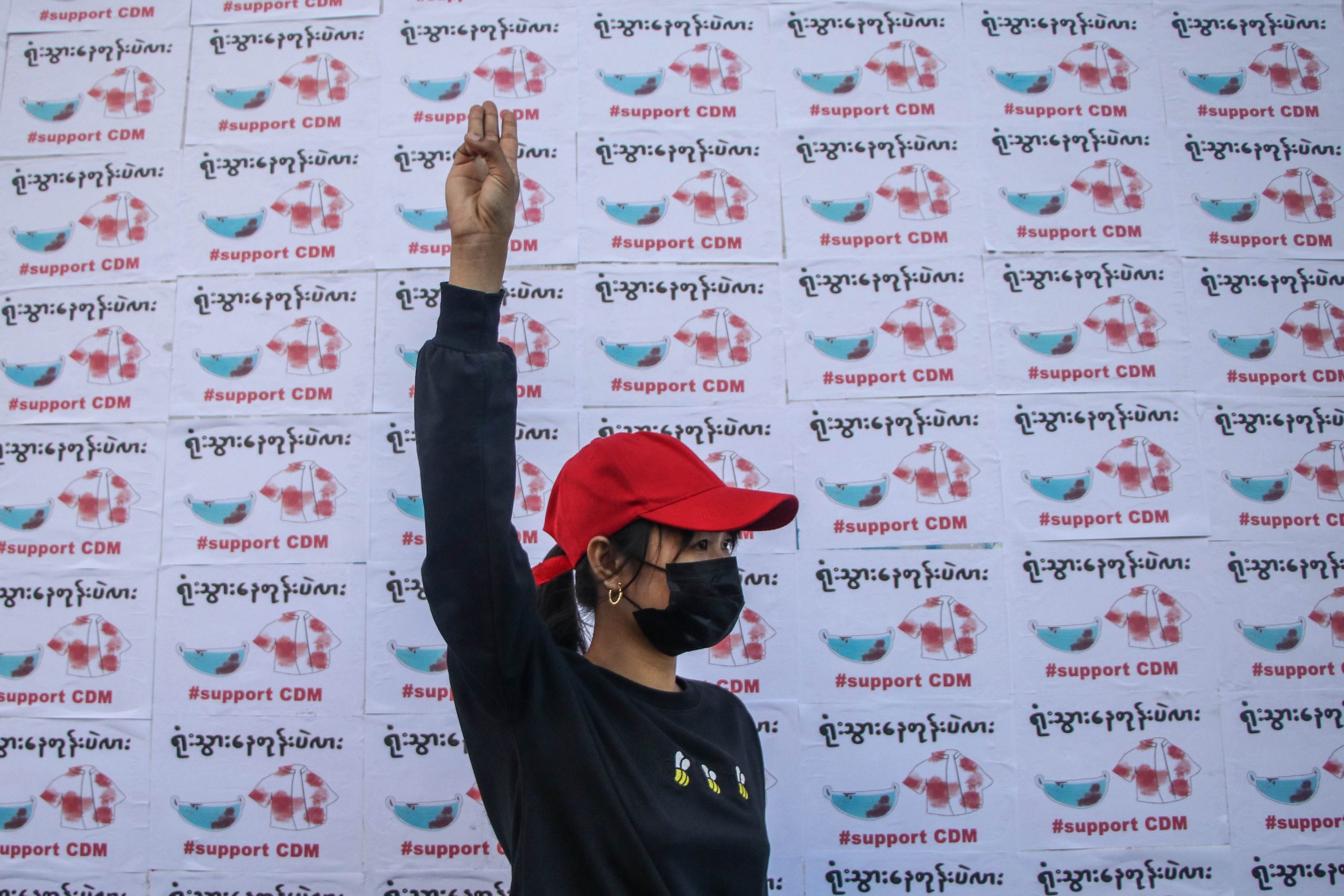 Home » Views and Points » Myanmar: ‘Our Opportunity Has Now Come’

On 1 February 2021, the dreams of many people in Burma (Myanmar) were shattered overnight. Since then, I, along with everyone else in my country of over 55 million people, have been living in darkness.

The situation one year since remains dire – one of shrinking basic freedoms, a banking and financial crisis, mounting civil war in the midst of an unthinkable human rights disaster. For someone living in what is already one of the world’s most impoverished countries, facing a military coup during a global pandemic is akin to experiencing an 8-magnitude earthquake in the middle of a category-five cyclone.

Whether out in the streets or at home, one can die from a stray bullet. Soldiers shoot wildly every time they face a hit-and-run attack by urban underground fighters. Before going out, we remove all sensitive content from our mobile phones, including the VPNs needed to open apps like Facebook. Refusal to cooperate with soldiers at checkpoints can lead to severe consequences, including torture and death. They can arrest anybody for the most ridiculous reasons, and in most cases, won’t release them without ransom payments.

Many people have lost their jobs, sources of income. Those who still have work are seeing their incomes shrink before their eyes, due to rising inflation.

Usually filled with customers, shops and restaurants along the major streets of Yangon, the country’s most populous city, are empty, or have shut down. An increasing number of private properties are being confiscated for “harbouring terrorists”. Nighttime checks by local officials are becoming more frequent.

But life in the cities and towns is relatively peaceful when compared to the areas where war has been raging, such as in Sagaing and Karenni regions. There, locals have lost everything as the army loots and destroys, burns villages deemed to be assisting resistance fighters. The nearly 190,000 people displaced from those two regions, many hiding in the jungles, make up almost half of the total number of those who had to flee fighting and insecurity within the country as of mid-January.

The steep human cost of today’s resistance is the consequence of Burma’s standing up to some 300,000 men who think power comes from the barrel of a gun. After one year of defiance, public dissent that began as peaceful protests has morphed into all-out revolution.

When the junta crushed those early protests, we could have relented in order to avoid more bloodshed. But too many boundaries have been crossed – first the negation of our elected government in the November 2020 election, and second, the violent crackdown on the peaceful exercise of our civic right to protest.

Instead of going back to our normal lives, we have decided to take a huge risk and fight to free Burma from a monstrous military whose brute force has plagued the country for six decades.

Many men and women, ranging from teenagers to those in their forties, have now joined the People’s Defense Forces (PDFs), formed for self-defense by local communities or as part of the National Unity Government (NUG)’s strategy against the military. Unarmed combatants, inside the country and overseas, send support for the PDFs in cash or in kind, through secret channels.

The army, like an enraged tiger, has been showing all its teeth.

As a result, conflict that had previously confined to some borderlands has spread into urban areas, such as the eastern city of Loikaw. Residents in previously calm territories – in the central regions – are seeing first-hand the barbarity of the Tatmadaw that they have heard of before but whose abuses, such as those committed against the Rohingya in 2016 and 2017, they hardly bothered to believe.

At the same time, peaceful paths of struggle continue. Civil disobedience and flash-mob protests persist. A ‘silence strike’ rang out loud and clear across the country on the coup’s first anniversary, with people staying in their homes between 10 am and 4 pm.

Behind the scenes of widespread resistance, there are low-to-medium levels of debates about how to kick the military out. These are valuable tools for surveying public sentiment and discussing the future we want to create, apart from being sources of levity and means of catharsis – that is, if one is able to internet access.

But even if people hold varying opinions, they are united by their hatred of the junta.

Some initially questioned the silence-strike approach, saying ‘we’ve done this before’ or ‘it can only hurt poor people’. But disagreement dissolved after news came out that the junta had threatened to “severely punish” those who shut their businesses – a reaction that many interpreted as proof that the strike had succeeded even before it began.

‘Look at the junta’s response, if you’re still unsure,’ is a comment often made, half-amusingly, in similar conversations.

The armed struggle against a battle-hardened Tatmadaw, which regards itself as the guardian of the nation and has been seen by many citizens as such as well, comes at a great cost – in lives, property and personal opportunities.

Much of the international community frowned upon the NUG’s declaration of a “resistance war” against the junta. Their concern that this would lead to utter devastation is understandable, but experience has shown us that negotiation and dialogue in Burma’s context mean absolute compliance with the terms set by the Tatmadaw. Look at how it has scorned ASEAN’s five-point consensus thus far.

This reminds me of an incident from my days as an overseas student – in the days before the sham election of 2010 that was part of the Tatmadaw’s agenda to delude the world about their ‘democratization’.

Before a panel of professors, a fellow Burmese student was defending her thesis about the country’s crisis. After her presentation, one professor asked her what she thought would be the best solution for Burma’s political stalemate.

That reaction was not uncommon. Even inside Burma at that time, very few would have agreed with the idea of taking up arms to bring about political change.

But now, some 10 years later, is her idea of using coercive power to force change playing out before our eyes? No foreign troops have come to ‘save’ Burma, but the Burmese people are fighting to liberate themselves.

What does this tell us? For the first time in decades, the Tatmadaw is losing its lifeblood: support from the Buddhist Bamar. They make up 60% of the country’s population and account for the bulk of the army’s forces. Their soldiers are being killed in Bamar-dominant regions such as Sagaing, a source of new recruits in the past. Military academies have been seeing record drops in applications.

Despite their more numerous troops and more powerful weapons, the junta’s loyalist forces are struggling to have full control of the country. Their upper echelons are incredibly wealthy. Low-level officers are notoriously corrupt and unlike before, lazy to fight, while rank-and-file soldiers are poorly paid and trained. Defections by security forces have been reported, with the resistance estimating this at 2,000.

Indeed, my country is plummeting into the gravest political, economic and humanitarian crises in its modern history. But I see a bright future ahead, beyond the darkness. A future that until recently seemed to be an impossibility, or one that would take generations to shape, if the coup did not happen.

I have not seen Burma’s heterogenous and divided peoples as united and as eager to win as today, and therein lies the reason for my confidence in victory.

“In the midst of every crisis, lies great opportunity,” Albert Einstein said. In Burma’s case, that great opportunity has now come. It lies, too, in understanding that “dictators never leave alive”, as a highly influential writer, the late Ludu Daw Ahmar, said.

Making use of this opportunity means we finally get a real chance to build an entirely new nation.

(*Zwe Mahn is a writer and translator. He prefers to call his country ‘Burma’, which was its name until a previous junta unilaterally changed it to Myanmar in 1989.)

Photo: Protester from the days soon after the Myanmar coup – Myanmar Pressphoto Agency