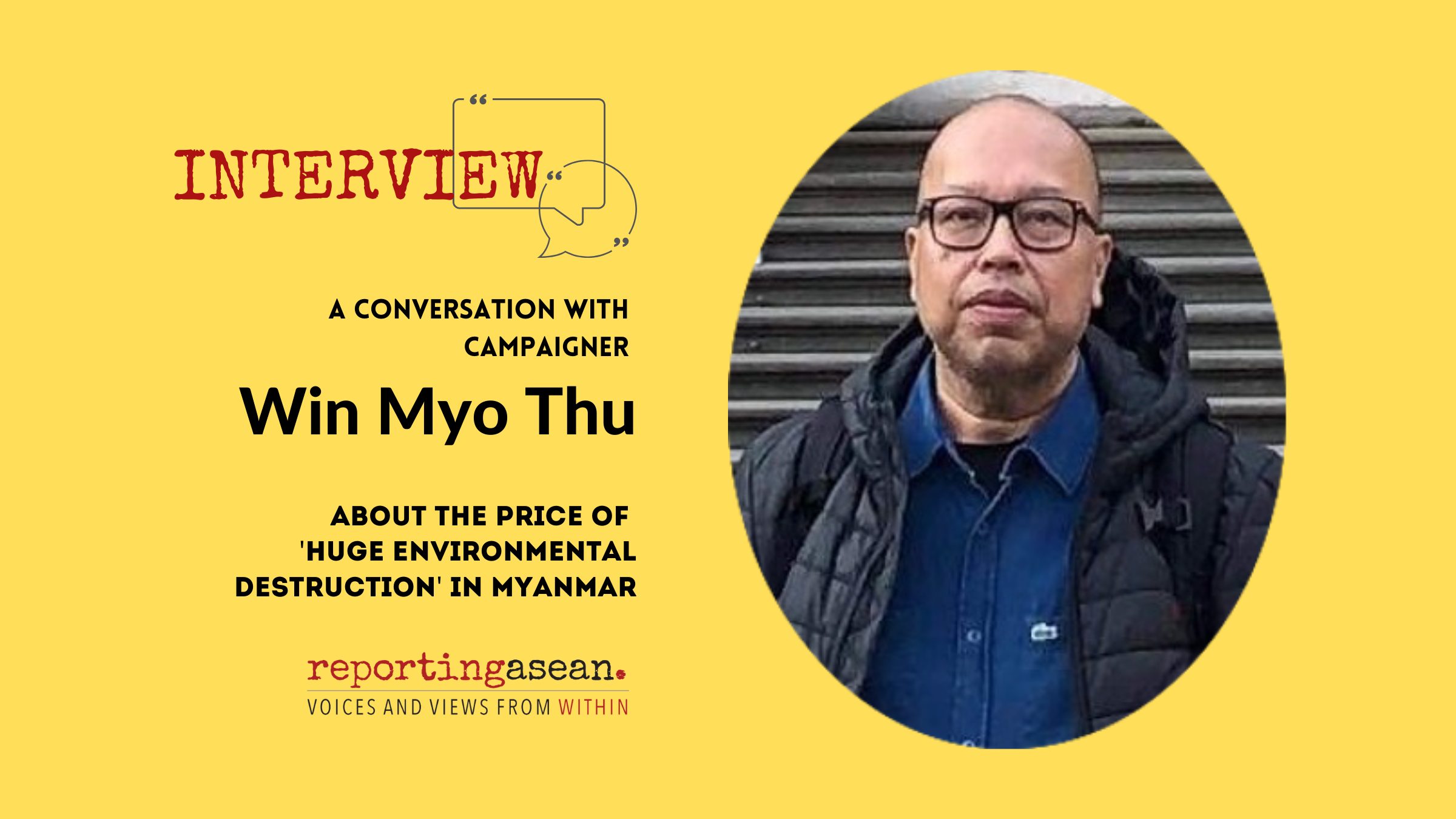 Home » Sustainability » Myanmar: ‘My Biggest Worry Is That We Are Never Able to Re-emerge’

Myanmar’s human, social and natural capital have been “rapidly diminishing” after the 2021 military coup, explains Win Myo Thu, a respected environmental campaigner who, for over three decades, has been working with local communities for better access to land, forest, water, food and a clean environment.

Currently a visiting research fellow at the earth sciences department of Oxford University in Britain, he worries that if its drastic regression persists, Myanmar could fall apart.

Sustainability issues and action on these, including on deforestation, have long been lagging as priorities even before the military seized power in this country of over 55 million people. But these matters have become even harder to advocate for at present, in the atmosphere of political and military repression, people’s survival needs amid food, livelihood, the pandemic and other insecurities – and Myanmar’s inability to carry out any serious action relating to the environment or climate crisis.

Across global and regional indicators, Myanmar regularly comes up as the country with the highest risks in a major, say weather-related disaster, due to its lowest capacity to deal with such.

Win Myo Thu tells Reporting ASEAN that his biggest worry is that the country becomes so overwhelmed that “we are never able to restore, and re-emerge, to the level of a normal operating range so as to improve climate resilience”.

“I also do not see any chance of making solidarity for a Federal nation (even if the current military junta is removed from power), although we dream a lot. The most likely scenario for Myanmar is a collapse into several small nations,” said Win Myo Thu, who is on sabbatical from ALARM, the local group he founded, and from where he has contributed to national policymaking on biodiversity, forest law and policies on extractive industries.

Reporting ASEAN’s Johanna Son: What space is there to discuss, or worry about, sustainability issues, including the environment, given Myanmar’s conflict and its deteriorating development picture?

Win Myo Thu: We can publicly talk about sustainability issues as long as they appear not to be defamatory to SAC (State Administrative Council, the military-led body set up after the coup). Since there is no rule of law in Myanmar, anyone criticising any acts of SAC and their performance would be highly vulnerable. I am testing the limits of how much I can express the weakness of government policies and actions affecting on environment in social media, but so far I am not yet in their urgently wanted list, as far as I know. Maybe I am in the watch list.

Are people aware of these sustainability issues? Is the environment ministry still doing its work, given all the focus by the military on trying to get control?

Win Myo Thu: People are aware of increasing rates of illegal logging, gold panning and mining. The Environmental Conservation Department (ECD) has kept asking mining license holders to submit their due diligence for environmental compliance as written in their EIA reports. For that, some miners came to our environmental lab for testing air quality and water quality. However, on (the) ground, they are not really paying attention to environmental safeguard measures. Government agencies could not also go to the field and inspect them. In social media, some reported about illegal logging in forested areas.

Win Myo Thu: Unfortunately, this is a time for survival to exploit more natural resources. This is true for both government and poor households.

How do conflict and the environment feed into each other, especially in a country that has been relying on extractive industries (not just the military, but also the ethnic armies given long-time war)? Could you give an example?

Win Myo Thu: Over-exploitation of natural resources is everywhere now in the regions, where resources are still left on the ground. Both in EAO (ethnic armed organisations) and non-EAO controlled areas (even in strictly controlled national park areas), extraction of jade, gold, rare earth and timbers have reportedly accelerated, regardless of the security concerns. At the local level, charcoal making by local small business firms and village communities is also mounting. All of these (have) exacerbated environmental degradation and depletion rapidly.

In the area of decarbonisation and international commitments, does Myanmar under the military have capacity to push that agenda domestically? Even in electrification, it is the lowest in the region and people are struggling with power outages.

Win Myo Thu: In the NDC report (Nationally Determined Contributions, or plans for climate action) submitted by Myanmar authorities to the UNFCCC (United Nations Framework Convention on Climate Change), the only quantifiable targets described were halving deforestation and  increasing the share of renewable energy generation by 2030. Data manipulation was made for the latter in the given scenarios of BAU (business-as-usual) and planned targets, so that it made no sense at all. Those investors awarded by the NLD (National League of Democracy-led) government in 2020 for the 1000-megawatt solar electricity generation (projects) turned down their bidding*, and SAC put them into a blacklist. There is an intention to resume some Chinese big hydropower dam construction, but they are also reluctant to start their operations during (this) SAC-ruled period.

Therefore, there is no way Myanmar can increase their renewable generation significantly within the next couple of years.

The Forest Department could not even go to the field – how could they make an effort to meet such a target (on climate action)? The main drivers of deforestation are forest exploitation and commercial agriculture expansion. A recent speech given by SAC chairman clearly indicated the junta’s ambition to grant more land concessions for rubber, banana and palm oil plantations to business investors. So, totally impossible to meet the NDC targets by any means.

Several studies and global indicators show that Myanmar has high disaster risks like other Southeast Asian countries, such as the Philippines, but the weakest capacity, given that the state has practically collapsed. What does this tell us?

Win Myo Thu: Measures for natural disaster risk reduction and climate change adaptation have only been highlighted in reports. These have been neglected (for) so long by both military and democratic governments, in terms of allocating substantial resources and commitment to address the issues effectively and efficiently. People have to solve problems on ad-hoc basis. People helped each other whenever there was a disaster. Remaining good natural resources also, at least, gave a little bit of room to breathe by providing food, water and material to those victims.

(But) due to recent political turmoil, there is a huge environmental disruption, and both social capital and natural capital are rapidly diminishing.

What are your biggest worries and hopes? What could more neglect of environment/sustainability issues mean in the coming years or when the country is back under civilian rule?

Win Myo Thu: My biggest worry is that the carrying capacity of our political ecosystem in terms of human, social and natural capital becomes lower and lower, reaching the lowest (level) – and we are never ever able to restore, and re-emerge to, the level of the normal operating range so as to improve climate resilience.

It is like Mayan society and Babylon in history, which were totally devastated and (then) disappeared due to certain environmental problems and disruptions they encountered. If the current trend continues for the next five years, at least 10 million people are to (going to) be seriously suffering from both political and environmental disruption. There would be huge outmigration and (this) threatens the regional security in the long run.

What role do these play in a future, including if federal, Myanmar?

Win Myo Thu: I also do not see any chance of making solidarity for a Federal nation (even if the current military junta is removed from power), although we dream a lot. The most likely scenario for Myanmar is a collapse into several small nations.

(*In September 2020, Myanmar’s ousted civilian government had carried out the bidding process for this set of solar projects. News reports said most of resulting agreements were not signed after the coup.)

This conversation has been edited lightly for brevity and clarity. – Ed.

Read also | Myanmar’s Multiple Crises: A Recipe for Disaster or click below