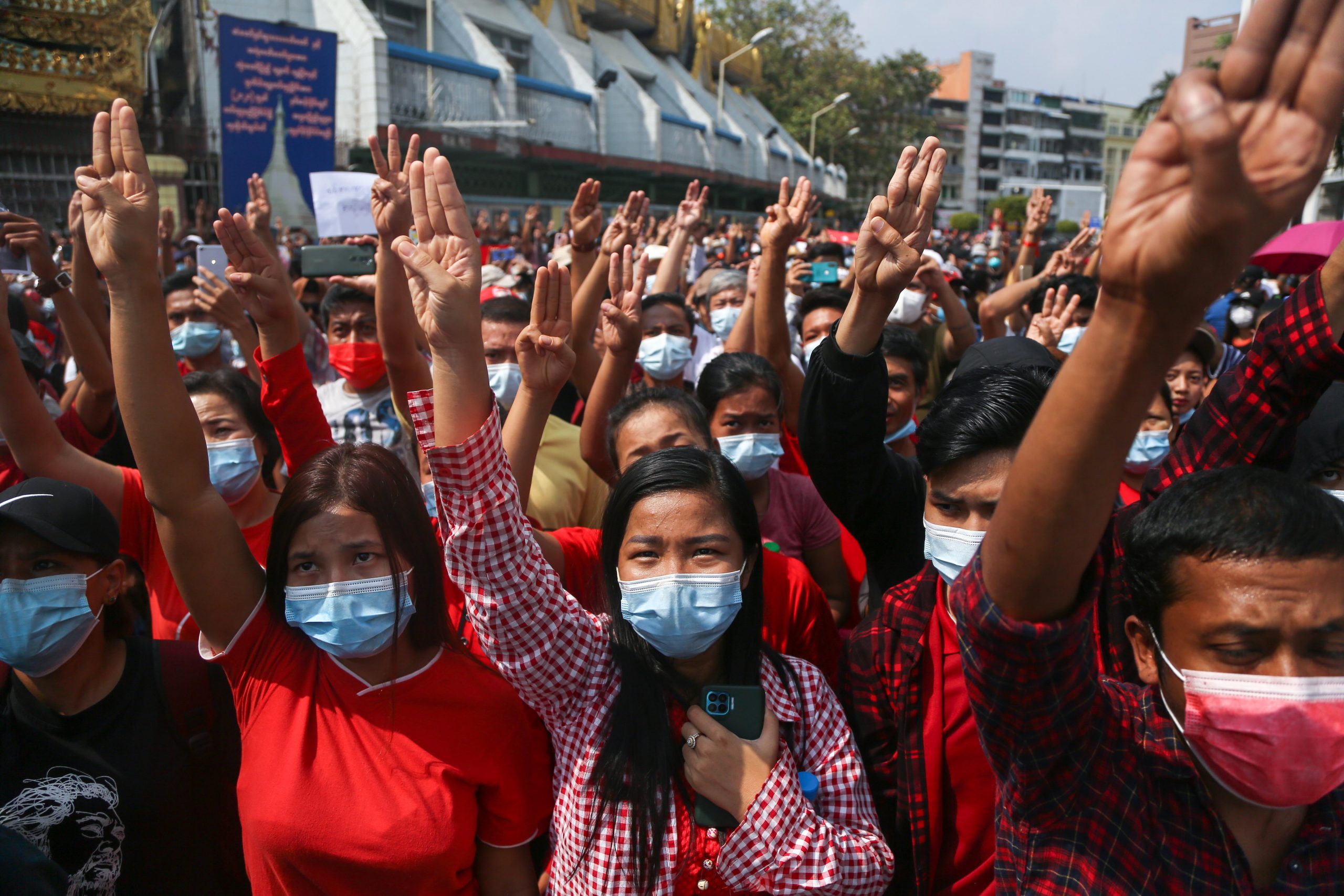 He can take a few hours, a day or a week finishing an editorial cartoon, drawing on a tablet through which he brings in, and let out, stories about the world around him, including those happening in a Myanmar that is coming undone since the February 2021 coup.

Social media and online spaces exploded with political cartoons and satire soon after the military takeover, encouraging many to stay with the struggle against the junta.

Half a year since then, Myanmar artists like ‘Lighthouse’ – not his real name due to security reasons – continue to draw cartoons around the crises around the economy, COVID-19 and the coup – and a Myanmar that has been living in the wounds of trauma for over seven decades since independence from the British.

As the junta tries to “close the eyes and ears” of people,”cartoons, as lighthouses, play a more important role now for the public to see the truth”, he explains.

But while crises can, and have, fired many an artist up with adrenaline, many have to focus on daily survival and safety these days. Fear does erode creativity, Lighthouse says. “I usually think of myself as staying on an island, in another country, while creating a cartoon”.

Revolution should not be a nation’s permanent state, the thirty-something artist sighs in this chat with Reporting ASEAN’s Johanna Son.. “I would rather draw cartoons on topics like the environment, development, education, technology, health instead of revolution,” he points out. “Our country is so out of date – it should not be (going through) a life-long revolution.”

Johanna: What is life is like these days in Myanmar? What’s the first thing that comes to your mind when you wake up?

Lighthouse: The first thought is ’Is it safe for me to go (out) and do as I had planned for the day?’. Also, I find it hard to look up Facebook updates as I already know there will be sad news about arrests, killings as well as unpleasant updates about the COVID-19 third wave.

In this atmosphere, is there still a creative environment? How do you manage?

Nowadays, I need to put more effort than before in setting the mood when creating art, as our country’s situation has a bad influence on my mind. To be honest, fear comes in to destroy creativity too. Not only the artist has difficulties, but the audience also has fears to express (themselves) and click the ‘like, comment, share’ buttons. In order for me to focus and manage my mind into an inspired mood, I usually think of myself as staying on an island, in another country, while creating a cartoon.

Right after the coup, we saw a lot of the use of arts – be it songs, editorial cartoons, poetry as protest. Are people continuing with this?

As Picasso once said, “Art is a lie that makes us realize the truth”. The military have now banned, or put strict censorship and regulations, on the print, broadcast and online mass media as much as they could, trying to close the ears and eyes of the public. Cartoons, as lighthouses, play a more important role now for the public to see the truth.

How would you describe the mood in the community of cartoonists?

The struggle (to survive) is harder than ever in the country, which also affects the mood of cartoonists for creative work as they worry for family income, food and safety. There is strong action from the military against any arts creation or speech or thought expressed in the media.

What has happened to work opportunities for artists, especially independent ones?

Independent cartoonists are struggling more than those who have stable work in media houses and other companies. If the artist has only art imagination in his mind, without worries about getting targeted income. . . his creations will become stronger. A bird with a stone tied to its leg cannot fly high.

Crisis, change and destruction can be a fertile place for artistic expression, and we have seen this in many cases through history. Is this happening in Myanmar?

Yes, we have to remember that only strong flowers can blossom in rough ground, and that not many types of flowers can be there. If possible, all artists would want a peaceful life so that they could be themselves, and not be bothered. This way, they can use the latest technology and improve art too. In peaceful democratic countries, high technology (tools) such as 2D, 3D animation, are used extensively already.

I would rather draw cartoons on topics like the environment, development, education, technology, health instead of revolution. Our country is so out of date – it should not be (going through) a lifelong revolution.

How do you connect to what’s happening around you?

It depends on the concept of the cartoon, and other things to consider. Examples are studying background history, observing what is happening and what will continue as consequences, what the public are speaking out loud, what they are suffering, how they are expressing their emotions. The artist cannot always sit on the table and focus on finishing artwork, but must go out and look around to get ideas.

What’s different with protest art these days, compared to the earlier uprisings?

A: There is massive difference between the protests before 1988 (student uprising), 2007 (monk-led uprising) and Spring Revolution this year, due to the development of technology. The public are also fully aware of false information, rumours spread by the junta, due to the feedback provided by trustworthy influencers, artists, politicians via social media. The youth created songs, pictures, street art, cartoon, walls of graffiti, which motivated the public. Almost everyone, especially the youth, played the role of minister of information (they are keyboard fighters also) in this Spring Revolution.

There were not many Burmese staying outside the country in 1988. Nowadays, there are a lot of Burmese immigrants around the world, and Internet communication is one of the strengths today.

How can art become a tool to heal that wounds/trauma Myanmar has, over many decades? It isn’t just this coup, but all the way back to the 1940s.

The Spring Revolution is led by the youth, Generation Z (that has) no fear, which makes it more successful than most adults expected. One of the reasons for Gen Z having bravery is they have never had wounds, trauma from the past, while people who experienced 1988 and 2007 have fear and worry. We really should consider from now on to cure the wounds and trauma by using cartoons, art, songs, to avoid having effects on the next generation. Art may not cure these 100%, but it could at least be the best vitamin supplement to prevent having trauma.

What do you see for your profession, especially if military rule stretches on for years?

There could be a generation gap in Myanmar’s art (community) with a brain drain in the future, as some artists are leaving the country. A lot of educated people left after the 1988 coup, one of the reasons our country become one of the poorest in the world. The military actually don’t mind educated people, artists, politicians being out of the country, since this makes it easier for them to control the nation as they wish. All they care about is their own wealth, but not the country’s development.