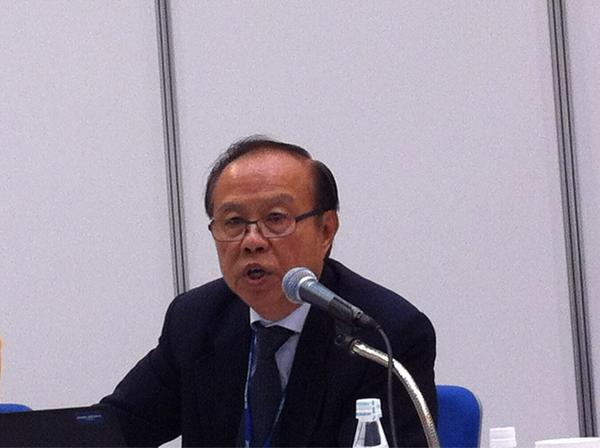 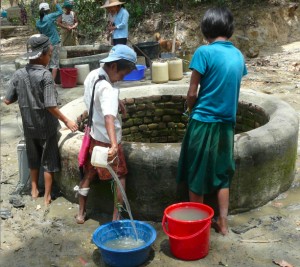 TOKYO, Oct 12 (TerraViva) – Foreign donors are rushing into Burma, whose government has been pushing the right political buttons as part of its democratic reform process. But development planners and Burmese activists here caution that  the best approach should still be ‘easy does it’.

“Please, please, please don’t rush in,” Khin Ohmar, coordinator of the Thailand-based Burma Partnership, said at a discussion organised by civil society groups led by the Washington-based Bank Information Centre at the IMF-WB Annual Meetings in Tokyo on Friday.

Burma has been in civil war for more than 60 years and has not resolved many of its internal ethnic tensions, she pointed out. “So it’s worth it to step back and ensure that we start with the right stuff.”

“A lot of people still feel sceptical (of the civilian-led government’s promise of a people-centered government),” said Thein Swe, a Myanmar professor who works at Thailand’s Chiang Mai University and who has also worked with the Myanmar government.

“Yes a lot of changes are coming in. All the right terminology, development jargon, the government has started using (those), but on the ground the mindset remains the same,” he said. “Policymakers use the right words, but this has not trickled down to the bureaucracy.”

Khin Ohmar and Thein Swe spoke after officials from the World Bank and Asian Development Bank (AsDB) said they were treading carefully for now and studying programmes to pursue or fund even though they have opened offices in the country.

Japan is Myanmar’s largest creditor so far, and has said it will give priority to aid to Myanmar, where elections led to political and economic reforms after the emergence of the civilian-led government of President Thein Sein in March 2011.

On Oct. 11, Japanese Finance Minister Koriki Jojima said Japan would resume yen loans to Myanmar early next year, after clearing that South-east Asian country’s loans of 500-billion yen (6.3 billion U.S. dollars), to help it get back on its feet.

In April, Japan agreed to cancel some 60 percent of Myanmar’s loans. Tokyo will also give bridge loans to help Myanmar refinance its loans to the World Bank and the AsDB that have been in arrears for a decade. 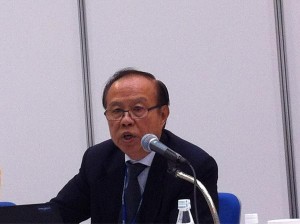 Annete Dixon, World Bank director for South-east Asia, explained that these bridge loans would give Myanmar a longer time to pay the outstanding amounts. “But Myanmar is unlikely to be eligible for debt relief,” she pointed out.

Overall, she said, Myanmar has had a “massive donor influx but very weak receptive capacity” and thus needed good donor coordination. The government has set up a foreign aid coordination committee.

The World Bank’s engagement is “very preliminary”, she explained, although the Bank has opened an office it shares with the AsDB and the International Finance Corp. and is now recruiting staff.

“We had no country operations in the past, so we have decided we will take a step-by-step approach to ensure that our assistance in the future will be effective in addressing huge challenges ahead,” said Kunio Senga, head of the South-east Asia department at the Manila-based AsDB. It is quite “premature to specify and commit to specific country programmes” at
this point, he added.

Instead, the AsDB has been doing economic and sector analyses and consulting stakeholders as it prepares an “interim country partnership strategy” for the next 18 to 24 months, Senga explained.

But Dixon said that the Myanmar government has undertaken radical reforms in the economic, financial and political spheres.

The government is drawing up a development plan, released to the public the whole IMF assessment of its economy, and for the first time discussed the budget, passed it in Parliament, and aired this on television.

The changes underway in Myanmar are “an enormous challenge for the government, which has to get an idea of the sensible sequence of how to do things, need to show results quickly to its population which has high expectations, and embark on a process that we know takes decades,” Dixon explained.

But the picture from outside can be somewhat different from realities inside the country, Thein Swe said. He expressed worries about experts coming in droves because of aid programmes, saying “we don’t want
external-driven aid, but consultation with the grassroots community is crucial”.

In terms of foreign investments, he conceded that banks consider Myanmar the “last frontier” as it opens up. “A lot of investors are rushing in – there is big potential but we must be very cautious about what kind of investments we would like to embark on.”

Thein Swe also said that while the government has made improvements in transparency, the fact remains that the lower house of Parliament in August rejected a motion that would have required all government officials to publicly reveal their assets. “It is shameful,” he argued.

Both Khin Ohmar and Thein Swe agreed that the human rights environment in Myanmar cannot be separated from development plans for the country.  “The development agenda cannot be a substitute for a political
settlement,” Khin Ohmar said.

Both raised questions about the military’s continued role in the country, and said citizens need to get used to more political space and speak up. 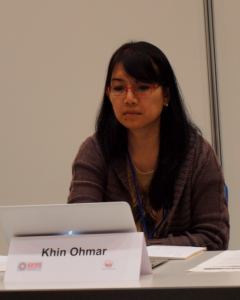 “We have to make sure that the role of the military will remain a positive one,” said Thein Swe. Under Myanmar’s constitution, the military get one quarter of seats in Parliament.

Khin Ohmar added that many citizens have yet to learn to speak their minds, a mindset that is the result of decades of military dictatorship. Besides, she added, even if the government showed Parliament discussions on television, “how many people can see it in the whole of Burma (where parts of the country still have no electricity)?”  (END)

To see a video interview with Khin Ohmar, click here.

This article was originally published in TerraViva: http://www.ips.org/TV/2012IMF-WBAnnualMeetings/myanmar-easy-does-it-foreign-donors-told/